“At a certain point all everyone talked about was electrification. You couldn’t say anything positive about gas.”

I am speaking with Bert den Ouden, one of the most experienced and respected energy experts in the Netherlands, currently managing director Energy at management consultancy firm Berenschot, about the Dutch energy transition.

Until recently, says Den Ouden, the mood among policymakers and stakeholders in the transition debate was very much anti-gas. This had everything to do with the earthquakes in Groningen. “No one wanted to have anything to do with gas anymore. Quite understandable, but not necessarily the most efficient approach.”

Over the past year Den Ouden and his team managed to bring some balance back into the debate. In the Dutch “climate accord”, an important policy document prepared by a wide range of stakeholders – NGOs, business associations, labour unions, local authorities – under direction of the government, which was published December 21 last year,  the importance of “molecules” in the low-carbon energy system of the future does get some recognition, says Den Ouden. “We feel that our input was heard to some extent.”

Not that Den Ouden is in any way an apologist for the gas industry. He has a wide-ranging background: he started out as an energy efficiency specialist at the well-known independent research agency CE Delft, then went to the Ministry of Economic Affairs, where he “did energy savings”, and subsequently became co-founder and CEO of APX-Endex, the Amsterdam-based electricity and gas spot market, which was launched in 1999 and today is part of the EPEX spot and ICE-Endex market platforms. In this role, Den Ouden became one of the architects of the “electricity market coupling” – interconnected power markets –that has made great headway in Europe.

He now leads a team of 10 people at Berenschot, working for both public authorities and private industry. He is not inclined to be anyone’s mouthpiece in any case. “We are strictly independent”, he says. “When you hire us, we don’t tell you what you want to hear. We tell it like it is.”

Den Ouden and his team decided last year to make two energy transition scenarios (“transition paths for a CO2-neutral future”) as input for the negotiations that were going on for the climate accord, one based on “Electrons” and one on “Molecules”.

The main building blocks of the Electrons scenario:

The main building blocks of the Molecules scenario:

The Molecules scenario turned out to be significantly cheaper than the Electrons scenario: €31bn ($35bn)/yr versus €45bn/yr, he says, as can be seen in this graph: 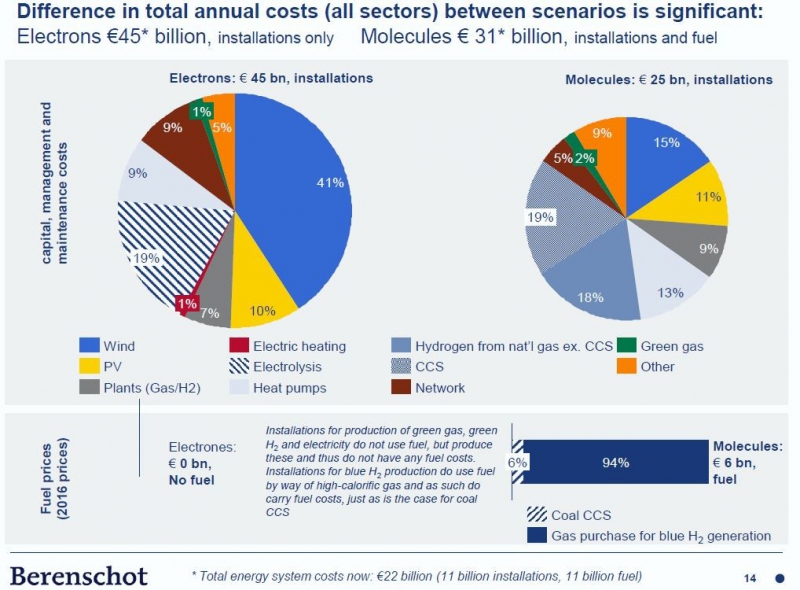 The major reason for the difference: the costs of the production facilities. In the Electrons scenario, two-thirds of capital expenditure and operating expenditure goes into (offshore) wind power and electrolysis, which is much more expensive than blue hydrogen, notes Den Ouden.

There is also a big difference in the amount of production capacity needed in the two scenarios, as can be seen in this chart: 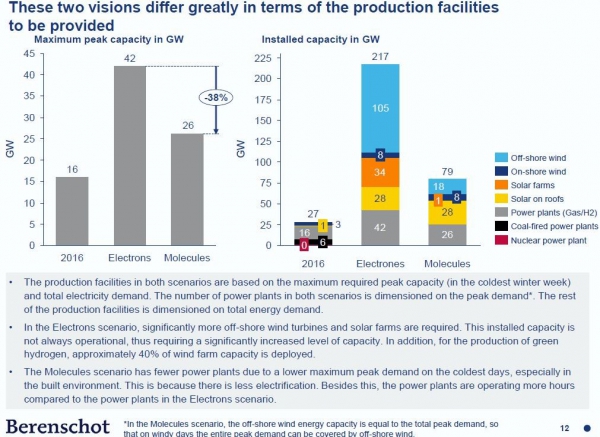 The left side shows the peak capacity needed in the two pathways, the right side total capacity. Clearly the Molecules scenario is much more favourable. Den Ouden notes: “If you want to produce green hydrogen from offshore wind, you need to build one-third more offshore wind capacity. You throw away 30% of your energy.”

What is also interesting to see is how coal, oil and gas fare in the two scenarios: 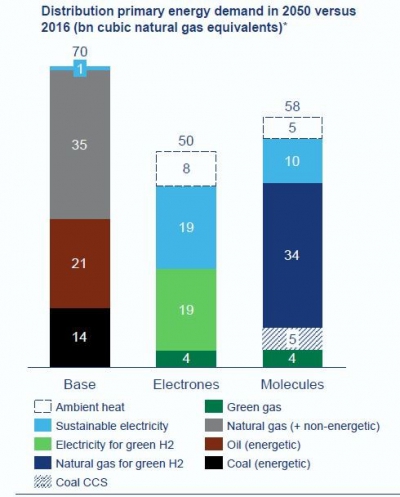 In Electrons there is no natural gas anymore. In Molecules, there still is a large role for natural gas. As a matter of fact, 34bn m³ is almost as much as the Netherlands uses today!

To see if the Netherlands could also achieve a pathway with lower natural gas use that would still be economically efficient, Berenschot decided to do a third analysis, called “the Heat scenario”, which was published in September 2018. In this scenario the demand for heat is met as much as possible with district heating networks which use sustainable heat sources: geothermal, solar thermal and waste heat from industry and data centres. A small amount of heat is supplied with electric heat pumps and “green” gas.

The result: estimated costs came out at €38bn/yr, i.e. in between the Molecules (€31bn) and Electrons (€45bn) scenarios. Much of this cost is due to the need in this scenario to build a large-scale district heating network to replace the existing gas network. At this moment there is very little district heating in the Netherlands.

Here is how the Heat scenario compared with the other two in terms of production capacity and final energy mix (note that the hydrogen in the Molecules scenario is made from natural gas with carbon capture and storage): 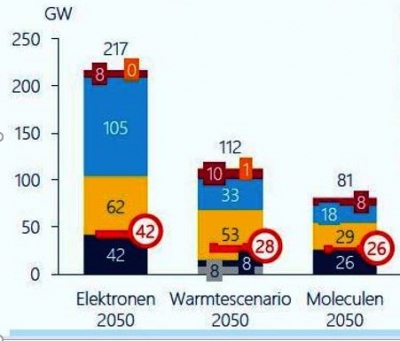 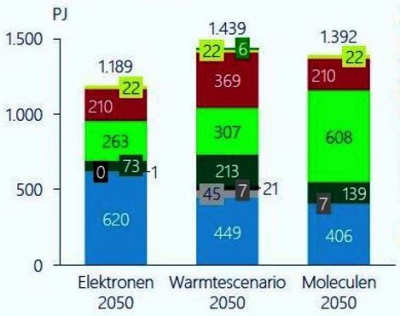 The key difference between the Molecules and Heat pathways, says Den Ouden, is the substantial use of natural gas made in the Molecules scenario. Is that a problem? That’s for policymakers to decide, he suggests, but he does point out that “CO2-neutral is not the same as fossil-fuel free, although the two are often confused.”

Green Hydrogen 'a long way off'

In general, Den Ouden believes that a single-minded drive to ban fossil fuels does not necessarily lead to the most cost-effective solutions. The discussion around hydrogen is a case in point. Some people want to focus exclusively on “green hydrogen”, but, says Den Ouden, “it is going to take a very long time before you can rely purely on green hydrogen. It is much faster and cheaper to adopt blue hydrogen first. Then when you get to a point where you have excess renewable energy, which will take many decades, the infrastructure will be ready.”

He adds that “blue hydrogen is 1.5 to 2 times as expensive as natural gas, green hydrogen 6 to 10 times.”

Den Ouden does believe that hydrogen will have a place in the energy system of the future, particularly in heavy transport, heavy industry (the existing industrial gas networks in the Netherlands can be easily converted for hydrogen) and also as feedstock for district heating networks. But not – or only to a very limited extent – in the built environment. “We don’t think it’s needed there.”

Still, in the built environment, too, the perfect (= fossil-fuel-free) can also be the enemy of the good (= CO2-neutral), says Den Ouden. “For a large part of the housing stock, built in the 60s, 70s, and 80s, we believe hybrid solutions work best. A hybrid heat pump, one combined with a gas-fired boiler, is much cheaper and works much better here than an all-electric pump.”

Such a hybrid solution would still see gas being used in the built environment, but this would go down from 16bn m³ to 4bn m³. According to Den Ouden, this is an amount that could be supplied with domestically produced biogas.

He fears that too many NGOs and policymakers are focused on getting rid of natural gas rather than opting for the best CO2-neutral solutions. He recently bought a hybrid heat pump for his own house and has been amazed at how well it works: his gas consumption is down by 75%, with a limited investment. He says: “we need more hybrid, smarter solutions. All-electric solutions require very deep renovations which will make the energy transition much more expensive.”

He sees a similar discussion around CCS. “When I look at the climate accord, I am afraid that too many restrictions are being put on public funding for CCS. There is no need for that if we use CCS to produce “blue hydrogen” as a carbon-free resource. This would provide a kickstart to building the infrastructure we will need in future for green hydrogen.”

Greenpeace and other NGOs tend to be opposed to CCS, because it keeps fossil fuels in the picture. “I understand the lack of appetite for fossil fuels, after all that happened in Groningen”, says Den Ouden. “But we don’t need a messy divorce. The children have moved in with the mother, electrification – for now. But they still need their father for contact, comfort, security and financial support. Maybe we need shared parenting!”

Gasunie CEO Han Fennema said: "In order to cope with increasing fluctuations in the energy network we need our gas and electricity infrastructures to be seamlessly aligned. If our Outlook 2050 makes one thing clear, it is that linking Tennet's network to Gasunie's will provide the flexibility required by the energy system; it will also keep the system reliable and affordable."

At a debate at the College of Europe in Bruges, Belgium, February 7, EU Energy Commissioner Miguel Arias Canete had a mixed message for the European gas industry. “The direction [of the EU energy system] is very clear,” he said, according to a report on the Brussels-based website Euractiv, “electrifying the economy and renewables.”

Nevertheless, he added, “we will not be able to get to 100% renewables overnight. Natural gas offers the flexibility that can complement variable electricity generation coming from renewables. As such, it will act as a bridge to decarbonise the economy.”

The comments did not come as a surprise, notes Euractiv. In November last year the European Commission (EC) said in its 2050 strategy, A Clean Planet for all, that wind and solar, combined with nuclear power, would be “the backbone” of a decarbonised energy system by 2050. “The role of gas will not be the same in 2050 as it is today,” Canete said back then.

At the 4th EU-Norway Energy Conference in Brussels February 5, Canete also said the EC wants energy consumption to be reduced by 50% in 2050, further putting the squeeze on gas.

In addition, there would be “a radical transformation in the types of gas that will still be in use in 2050,” notes Euractiv. As Canete said back in November: “Only e-gases, power-to-X and hydrogen will be present there – for sure.”

That leaves the [European] gas industry with a massive challenge to decarbonise”, notes Euractiv. “For industry executives, it means ramping up production of decarbonised and renewable gases, which currently represent a small fraction of the gas market.”

Where would they find these CO2-free gases? Euractiv quotes energy expert Jonathan Stern, from the Oxford Institute for Energy Studies, who points out, in a recent study on the role of natural gas in decarbonising European energy markets,: "In 2050, the maximum projected availability of renewable gas is equivalent to 25% of current EU gas demand. Maintaining current demand levels will therefore require very substantial volumes of hydrogen from reformed methane with CCS.”

Equinor's chief economist Erik Waerness warned in Brussels that “80% of our energy today is molecules, not electrons. Remember that if we are not relying on gas in the energy system, the need for massive investments in renewable electricity will be much higher.” He added that it will be “already enormously challenging” for wind and solar to reach 60% of all electricity production in Europe.