Is renewable power cheaper than fossil-based electricity? This is not a simple question to answer. Analysts tend to rely on comparisons of the levelised cost of electricity (LCOE), which is the average cost per kWh of electricity sold. Costs include capital expenditures, interest, fixed and variable operating costs, depreciation and taxes, but not balancing (and storage) costs. 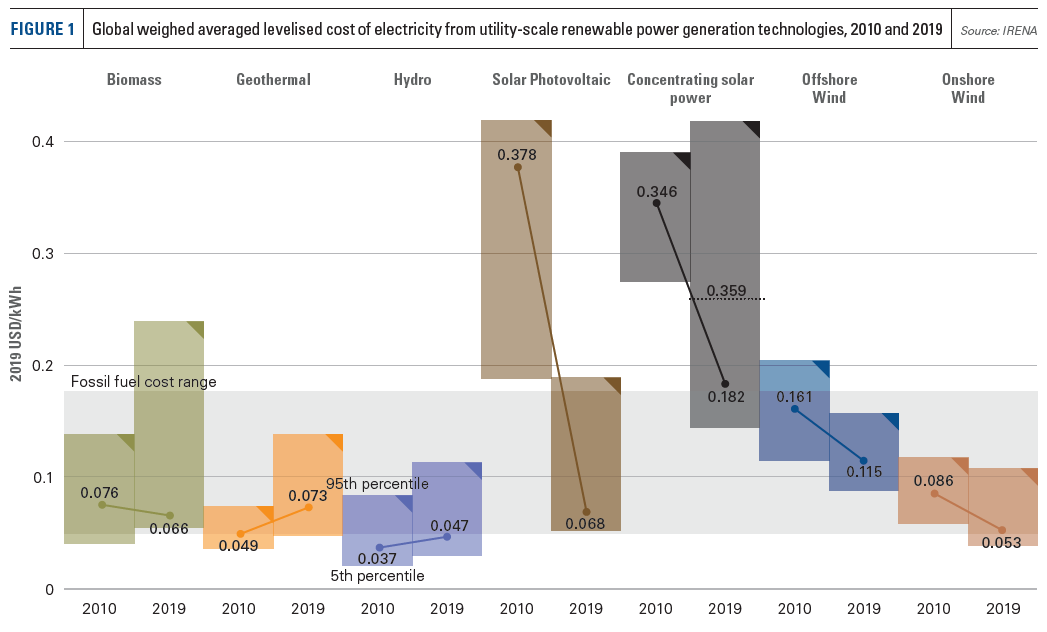 According to a 2020 report from the International Renewable Energy Agency (IRENA), over the past decade the costs of solar and wind energy have come down to the extent that they now fall in the same range as coal and gas-fired power, and are often even lower (Figure 1).

However, according to a new report written by sustainable energy experts Tony Seba and Adam Dorr for the think tank RethinkX, numbers such as those presented by IRENA, but also by the International Energy Agency (IEA), the US Energy Information Administration (EIA), investment bank Lazard, Stanford, MIT and other respectable institutions, systematically underestimate the cost of fossil fuel-powered generation. This is because they all tend to assume much higher capacity factors than occur in reality.

For example, in the US the EIA assumes a constant capacity factor of 87% for the entire 20-year technical life of new gas power plants. In reality, the capacity factor in 2020 was just 58%, says RethinkX. In other countries numbers are even lower. In a country like Australia for example, gas power plants produce electricity on average just 16% of the time, according to a report from the Institute for Energy Economics and Financial Analysis (IEEFA) (Figure 2). 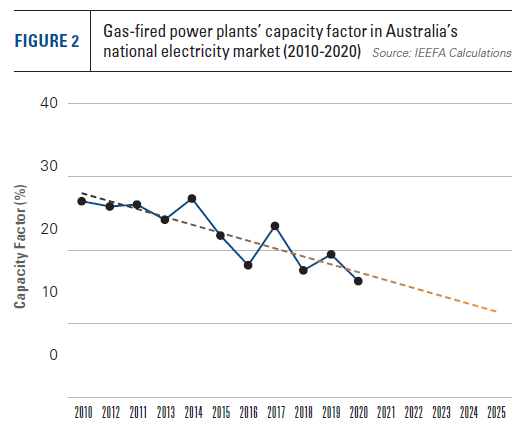 Clearly actual power production has a strong impact on real LCOE. RethinkX notes that if it is assumed that gas power plants in the US will reach a maximum capacity factor of 60% in 2022, which will then decline to 10% by 2035, as a result of the growth of renewable energy, their real LCOE will turn out to be much higher than projected by the EIA (Figure 3).

Dark side of solar

RethinkX undoubtedly has a point, even if the assumption of a 10% capacity factor for gas power in 2035 may be rather low. However, to make reliable cost comparisons, we should also look at how the LCOEs of renewable energy are calculated. For one thing, it is well known that LCOE does not include system balancing costs (including storage costs), which can add considerably to the cost of renewable power generation. 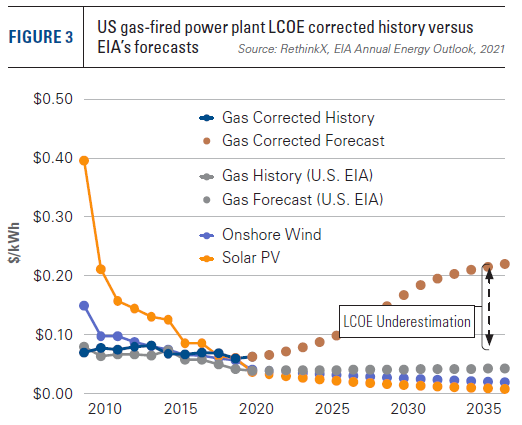 But there is another factor that analysts have not taken into account. In an article in Harvard Business Review (HBR) published on June 18, 2021, The Dark Side of Solar Power, Atalay Atasu and Luk Van Wassenhove of the Institut Européen d’Administration des Affaires (INSEAD) and Serasu Duran of the University of Calgary argue that the amount of waste generated by the substantial use of solar panels will lead to much higher recycling and disposal costs than is assumed by the likes of IRENA. The result, they say, will be a four-fold increase in LCOE costs of solar power.

The HBR authors note that IRENA and other think tanks tend to assume that solar panels get replaced by the end of their technical lifetime, which is 30 years. In reality, they say, replacement tends to take place much earlier, because it is economically more efficient to do so. Assuming that owners replace solar panels when it is profitable, the industry creates 50 times more waste in just four years than IRENA anticipates in its models, the authors estimate. This will lead to unforeseen costs of disposal and recycling that “could crush industry competitiveness,” they warn.

“If we plot future installations according to a logistic growth curve capped at 700 GW by 2050 alongside the early replacement curve, we see the volume of waste surpassing that of new installations by the year 2031. By 2035, discarded panels would outweigh new units sold by 2.56 times,” they explain. ‘In turn, this would catapult the LCOE…to four times the current projection. The economics of solar – so bright-seeming from the vantage point of 2021 – would darken quickly as the industry sinks under the weight of its own trash.”

Although recycling of solar panels is sometimes presented as a great “business opportunity”, the HBR authors are less optimistic. They note that currently it takes an estimated $20-30 to recycle one panel. “Sending that same panel to a landfill would cost a mere $1-2.”

The direct cost of recycling is “only part of the end-of-life burden,” they point out. “Panels are delicate, bulky pieces of equipment usually installed on rooftops in the residential context. Specialised labour is required to detach and remove them, lest they shatter to smithereens before they make it onto the truck. In addition, some governments may classify solar panels as hazardous waste, due to the small amounts of heavy metals (cadmium, lead, etc.) they contain. This classification carries with it a string of expensive restrictions – hazardous waste can only be transported at designated times and via select routes, etc.”

The same problem “is looming for other renewable-energy technologies,” the authors add. “For example, barring a major increase in processing capability, experts expect that more than 720,000 metric tons worth of gargantuan wind turbine blades will end up in US landfills over the next 20 years. According to prevailing estimates, only 5% of electric-vehicle batteries are currently recycled – a lag that automakers are racing to rectify as sales figures for electric cars continue to rise as much as 40% year/year.”

That is not all the bad news for solar power. According to a risk assessment compiled by a group of leading experts on solar energy including DNV GL, Wood Mackenzie, Bloomberg NEF, kWh Analytics and others, solar assets are “chronically underperforming”. Indeed, “project underperformance continues to worsen,” these experts conclude.

Reasons for the underperformance include “higher-than-expected degradation, terrain mis-modelling, and bankrupt manufacturers.” For example, they conclude that actual degradation of solar panels is around 1% per year – twice as high as assumed by leading research institutions such as National Renewable Energy Laboratory (NREL) and Lawrence Berkeley National Laboratory (LBL). One reason for this is too optimistic estimates for soiling (accumulation of dirt, dust, etc. on panels), which have a 99.5% error rate compared to ground estimates.

Solar power has a problem on the revenue side as well: the more capacity is built, the lower the price/kWh becomes, as solar panels tend to have their maximum production at the same time for obvious reasons. Already in California, solar prices are 28-35% lower than average hub prices and this trend will worsen as more solar capacity gets built.

The risk assessors also warn investors, as the RethinkX authors do. “The combination of chronic project underperformance and increasing operating leverage is elevating default risk for newly issued loans, even when loans are sized at the traditional 1.30x debt service coverage ratio (DSCR),” they write. “Sponsors and lenders will need to work together to structure around these difficult facts, even while still enabling projects to get built.”