Wood pellets are one of the “dirty secrets” behind the EU’s renewable energy success that is biomass. Contrary to what most people think, most of the renewable energy produced in the EU comes not from solar or wind, but from burning biomass.

To take Germany as an example: despite hundreds of billions of euros in renewable energy subsidies, solar and wind power together currently account for just 5.9% of primary energy consumption, biomass 8.5% (Figure 1). In most other EU countries, the share of wind and solar is even lower. 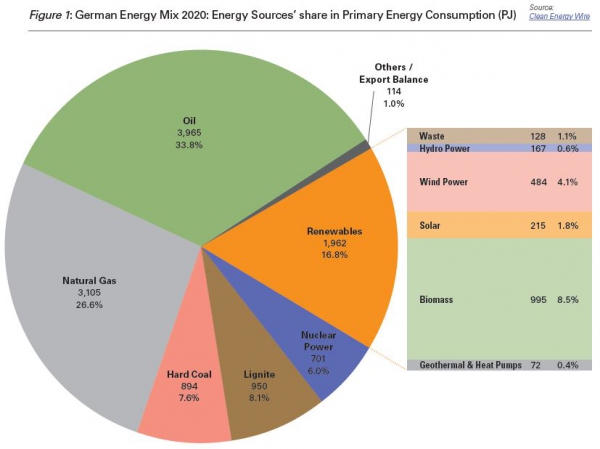 The problem with biomass is that its climate benefits are doubtful at best. This applies in particular to the burning of wood pellets in converted coal power stations. As Annika Lund Gade, project officer at Green Transition Denmark, and Peter de Jong, program leader at Dutch environmental NGO Natuur & Milieu, point out in a recent article: “Wood emits more CO2 per MWh even than coal – as noted by the IPCC – which is why most environmentalists and scientists think that it takes several decades for plant regrowth to reabsorb the carbon emitted “in one pulse” from wood burning.”

Michael Norton, environmental director of the Science Advisory Council of the European Academies, wrote: “We have repeatedly pointed out that…the large-scale substitution of coal by forest biomass [to produce electricity] will accelerate climate warming, and will increase the risks of overshooting Paris [Climate Agreement] targets. The reason is simple: when the forest is harvested and used for bioenergy, all the carbon in the biomass enters the atmosphere very quickly, but it will not be reabsorbed by new trees for decades. This is not compatible with the need to tackle the climate crisis urgently.”

Yet wood-burning – and in particular coal-to-wood switching – is growing rapidly, writes Justin Catanoso in a recent report on Mongabay.com: “Are Forests the New Coal? Global Alarm Sounds with Biomass Burning.”

Catanoso notes that the forest biomass industry, which delivers wood pellets to power stations in Europe and countries like Japan and South Korea, is expanding rapidly in the US, Canada, Russia, Vietnam and Eastern Europe. According to Natural Resource Defense Council Senior Advocate Sasha Stashwick, “Much of the wood burned in UK power plants is cut down and shipped from ecologically sensitive forests in the US Southeast. Those forests are efficient and powerful carbon-capture systems and support unique wildlife found nowhere else in the world. But they can’t serve that important purpose if the trees are cut and turned into wood pellets, and don’t grow back for decades.”

US wood pellet exports have more than tripled from 2012 to about 6.9 million tons in 2019, according to Forisk Consulting. Companies like Maryland-based Enviva are building one wood pellet plant after the other. Two plants under construction in Alabama and Mississippi “promise to be the largest pellet-producing facilities on earth,” writes Catanoso.

According to Catanoso, “Subsidies for biomass energy generation are so great in South Korea that – as in the UK and EU – the Asian nation is reducing investments that would otherwise go to truly renewable energy sources like wind and solar, according to a new study. Russia and the US are supplying South Korea with pellets, but so too are Vietnam, Indonesia and Malaysia, whose biodiverse rainforests are already under extreme pressure from agribusiness and mining.”

Japan in its turn “is converting more than 20 coal-fired power plants to co-fire with wood pellets and coal until a complete transition to pellets can be made. Vietnam, relatively new to pellet production, will likely clear-cut thousands of acres of rainforest to meet Japan’s surging biomass demand. Pellet makers in Canada and the US are also gearing up to meet Japan’s soaring demand.”

In Europe wood-burning in coal power stations is also growing apace. According to De Jong and Lund Gade, “at the last count, there were 67 old coal power plants in Europe considering switching to wood burning.” That’s in addition to the plants already in operation.

Denmark imported over three million metric tons of wood pellets, causing a “national scandal”. In the Netherlands, there is also growing pressure on policymakers to cut support for wood-burning. The Netherlands is the EU member state with the fastest growth of wood pellet imports: forecast to more than double to 2.5 million tons this year.

The wood-burning is harming the forests in Eastern Europe. According to a recent news item on the German television channel ARD, deforestation has grown 49% since 2016 in Sweden, Finland and the Baltic countries. Liiana Steinberg explains in the report how she recently returned to her native Estonia and was shocked to see how much deforestation had taken place over the recent years: “I discovered how the forests no longer exist here left and right.”

“Where once massive hardwoods once stood now grows tiny fir trees.” The harvested trees, the report says, were used for wood pellets – a form of renewable green energy. The trees, the pellet industry says, will grow back. Not only are the forests taking a hit, but so is the wildlife that once inhabited in them. According to Steinberg, bird life has fallen some 25%.”

The reason for the rapid growth in coal-to-wood switching are subsidies as well as a “United Nations carbon accounting loophole”, notes Catanoso, which “designates the burning of forests to generate electricity as carbon-neutral, despite recent hard science that shows otherwise.”

“A lot is made of strict ‘sustainability criteria’ being attached to forest harvesting for wood pellets,” write De Jong and Lund Gade, “but – quite frankly – these criteria both at the EU and the member state level (where they differ) have failed to curb the huge growth in the global trade in wood pellets. 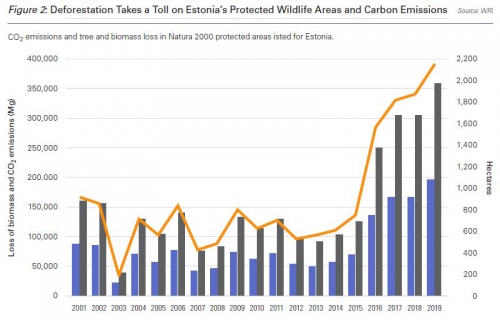 What counts as a ‘forest residue’, for example, remains too vague to prevent the wood pellet industry continuing to harvest whole trees. Coupled to the huge carbon accounting loophole (via which emitting countries can avoid counting the emissions generated from wood burning) and large subsidies and tax breaks to the industry and you can see why a forest bioenergy industry has grown so large in little over a decade.”

Another recent investigation by a team of 16 reporters from the investigative platform Money to Burn found that “wood from protected forests in Estonia ends up in biomass plants in Europe”.

The investigation shows that deforestation in Estonia is increasing (Figure 2).

EU countries, meanwhile, spent 2.5 times as much on subsidies for biomass burning in coal plants in 2018 than in 2008, according to the reporters (Figure 3). 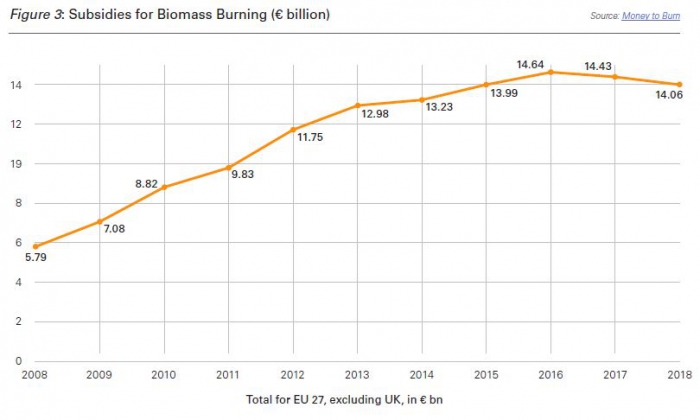 It seems that whereas climate campaigners in EU are doing their utmost to discourage investments in “fossil gas” (see article elsewhere in this issue), they have much less interest in the devastating effects of renewable energy from biomass. It’s a topic that the gas industry may do well to put on the table.