The 2021 Annual Energy Paper, written by Michael Cembalest of JP Morgan Asset and Wealth Management, published in the same month, offers a radically different view. It says that “absent decarbonisation shock treatment, humans will be wedded to petroleum and other fossil fuels for longer than they would like.”

Every year JP Morgan Asset Management comes out with an Annual Energy Paper. This year the 11th edition is called Future Shock. Written by market and investment strategy chair Michael Cembalest, it provides what you might call a politically incorrect view of the energy transition. Not that Cembalest is disputing the need for a transition, but he is arguing that it will take considerably longer than everyone thinks.

To illustrate his point, he presents a graph showing a number of forecasts for renewable energy shares from prominent sources, which have all proven to be far too optimistic:

Global reliance on fossil fuels has declined from about 95% of primary energy in 1975 to about 85% in 2020, writes Cembalest. Although prices of wind and solar power have declined rapidly, they are still used mainly to generate electricity, which accounts for just 18% of energy use. “Direct use of fossil fuels is still the primary mover in the modern world, as the demise of fossil fuels continues to be prematurely declared by energy futurists.”

Cembalest thus does not agree with assessments made by the likes of think tank Carbon Tracker that “post-COVID global fossil fuel consumption may never surpass 2019 levels.” Although global coal consumption may decline, “the IEA’s projected increase for global natural gas consumption by 2025 of 390bn m3 is 2.8x the decline in coal in energy (exajoule) terms.”

We will leave the EVs aside, and discuss the other three here. The first deals with transmission infrastructure.

Cembalest notes that net-zero energy plans, such as the net-zero plan for the US coming from Princeton University, “Net-Zero America: Potential Pathways, Infrastructure and Impacts”, depend on unprecedented expansion of solar and wind power, but also on an accompanying huge expansion of transmission grids. “From 2004 to 2020, US transmission grid miles only grew by 1.2% per year and would have to accelerate [according to the Princeton plan] to 3.9%-5.7% (these are very big differences when compounded over decades).”

Such expansion will run into public opposition and other obstacles, writes Cembalest. Distributed storage can help reduce the need for additional transmission grids, but not much: once storage capacity reaches 4% of peak demand, further storage investment does not reduce transmission requirements further, according to an MIT study.

The second obstacle Cembalest discusses is CCS, which “may face the steepest climb of all.”

“After 20 years of planning and conjecture, by the end of 2020 CCS facilities stored just 0.1% of global CO2 emissions,” the author notes. “Challenges include cost overruns, failure of bellwether projects (Kemper Mississippi), the US Dept of Energy withdrawing support for demonstration projects (FutureGen), cancellations in Europe, legal uncertainties about liability and a 20%-40% energy drag required to perform CCS in the first place.”

Although in Norway the Northern Lights sequestration project involving Total, Equinor and Shell has been given the green light, “its capacity will be just 0.0045% of global emissions.” 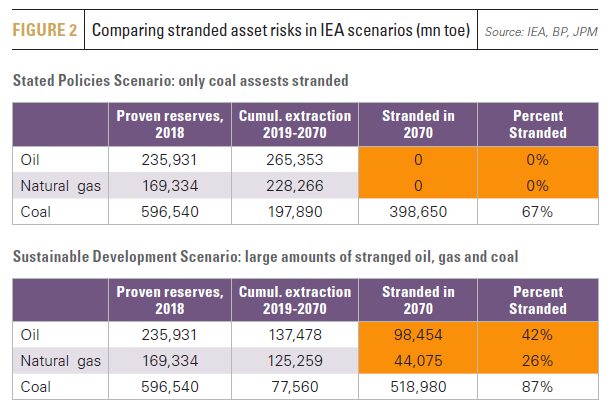 Cembalest throws some doubt on the prospects of this project, one of the greatest hopes of the CCS community. Norway, writes Cembalest, has a long experience with CCS, which has been used in the Sleipner Field in the North Sea, “one of the few existing CCS locations on the planet. We had a conversation with Peter Haugan, Director of the Geophysical Institute at the University of Bergen (Norway)… As it turns out, CCS is a very complex process: some nearby CO2 injection sites were abandoned since they turned out to be much less permeable than originally anticipated, in which case higher levels of pressure could have caused cracks; and in other locations, polluted water injection sites did cause cracks since injected water was found at the surface of the ocean.”

In other words, “the success of Sleipner so far is not a clear signal regarding the ease of CCS injection, even in well-known formations like the ones in the North Sea.”

Cembalest notes that studies touting the potential of CCS tend to rely on extremely ambitious assumptions. One prominent academic paper on CCS from Princeton assumes that 65,000 miles of CO2 pipeline infrastructure will divert 929mn mt/yr of CO2 from cement, gas-powered generation, natural gas reforming and biofuel production facilities to centralised locations “where they will be mostly sequestered underground (a small amount is assumed to be converted into synthetic fuels).” This compares to current US CCS infrastructure of 5,280 miles and 80mn mt/yr, most of which is used for enhanced oil recovery, Cembalest notes.

The Princeton CCS buildout, Cembalest points out, “just to sequester an amount equal to 15% of current US GHG emissions, would require infrastructure whose throughput volume would be higher than the volume of oil flowing through US distribution and refining pipelines, a system which has taken over 100 years to build. Princeton’s CCS projections are not that different from the ones found in pieces from Morgan Stanley, Goldman and other research houses.”

What about direct air capture (DAC), which is getting increasing coverage in net-zero plans? Cembalest writes that the material and energy demands of DAC “are beyond daunting”.

If DAC “based on aqueous hydroxide solutions were to capture 10 GT of CO2 each year (25% of global emissions), “somewhere between 1.7 and 3.0 gigatons of NaOH (caustic soda) would be needed; NaOH reacts with CO2 to create water and sodium carbonate Na2CO3, which can be heated to produce a gaseous CO2 stream … This amount of NaOH is 20-40 times its recent annual production, and also equivalent to 40%-67% of recent global crude oil extraction by weight.”

Furthermore, Cembalest notes, “electrolysis required to produce the NaOH would consume 25%-40% of world electricity, and hydroxide regeneration (used to reduce NaOH requirements by regenerating and reusing most of the reactant) would claim another 11%-17% of global primary energy. Putting both pieces together, NaOH electrolysis plus regeneration would require 15%-24% of global primary energy to capture 25% of CO2 emissions.”

A final nail in the coffin: “2,400 to 3,800 kWh per tonne of captured CO2 via [DAC] would be needed before whatever energy is required to actually store the CO2 underground; [DAC] energy needs appear to be 6 to 10 times higher than traditional CCS energy estimates, a process which itself is stuck in neutral.” As two scientists wrote in Nature last year: “[DAC] is unfortunately an energetically and financially costly distraction in effective mitigation of climate changes at a meaningful scale”.

The third obstacle, decarbonisation of the industrial sector – the largest user of fossil fuels – is also an extremely challenging affair, notes Cembalest. Some industrial processes – wood, plastics, rubber, certain mining activities, secondary steel processes – can be electrified. For other uses, such as chemicals, pulp/paper and food processes, “it gets harder”. These tend to rely on combined heat and power (CHP). To switch to electricity, “producers would need to purchase energy previously obtained at little to no cost, and/or redesign the entire process.”

Other hard to electrify sectors include non-metallic minerals such as glass, brick and cement “which require temperatures in excess of 1,400°C, and which are non-conductive solids (i.e., harder to electrify production of things that do not conduct electricity). Oil/coal refining exploits “own-use” fuel consumption, a source of energy lost when switching to electricity.” 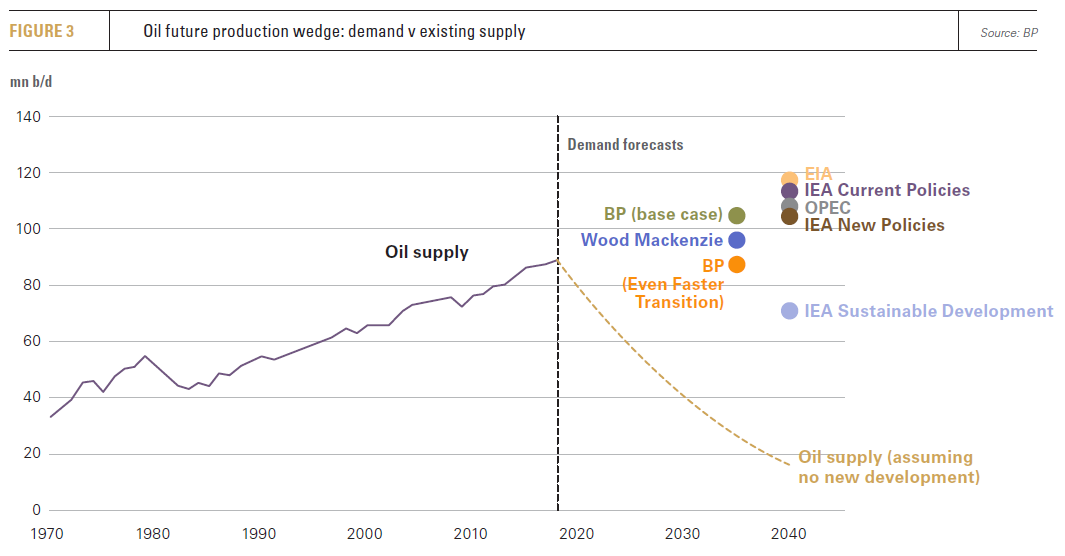 There are now some projects getting started that use “green hydrogen” as ra educing agent. A consortium of Swedish companies (Vattenfall, LKAB and SSAB) has embarked on this route, planning for some commercial production in 2026 and completion in 2045. However, notes Cembalest, the Nordic steel industry produces 0.35% of the steel in the world.

Stick with oil and gas

Cembalest concludes that “the world is not on track to strand a lot of oil and gas in the future and is much closer to the IEA Stated Policies scenario than its Sustainable Development scenario. Only in the latter are oil, gas and coal assets projected to be left stranded in the ground … “

As a result, he notes, “peak oil demand forecasts may end up being just as wrong as peak oil supply forecasts were a generation ago.” (Note that the IEA’s Stated Policies scenario is not a “business-as-usual” scenario, but reflects some far-reaching and ambitious climate targets.)

What would happen if the world were to heed the IEA’s advice and stop investing in new oil projects? That is shown in this graph:

Thus, contrary to a lot of the advice in the media, JP Morgan recommends “that investors stick with oil and gas for now. World demand for liquid fuels should continue to rebound as COVID vaccinations increase and economies reopen. As demand grows, we expect supply to recover more slowly. ‘Big Oil’ return on capital fell to single digits by 2016 due to excess competition; we expect these returns to rise back to 1990’s levels of 10%-15%.”

Cembalest ends with a rhetorical question: “Is everyone sure that we should starve this industry of capital starting now?

“The overarching message of this paper,” he concludes, “is not climate nihilism; it’s that the behavioral, political and structural changes required for deep decarbonisation are still grossly underestimated. If so, the companies we all rely on for dispatchable, thermal power and energy will need to survive and prosper until we get there.”