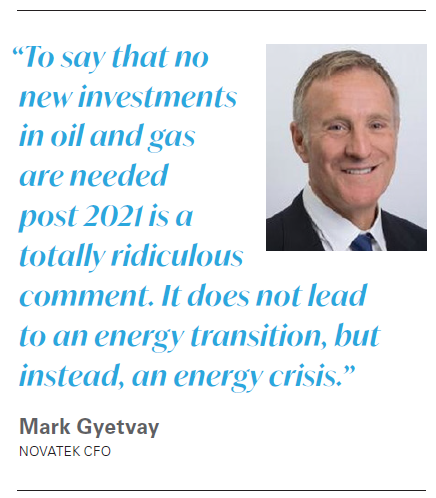 “Novatek’s pathway forward to decarbonisation is to sell more gas not less,” the financial head of Russia’s biggest LNG exporter and its second largest gas producer says. “I don’t consider natural gas to be a transition fuel or a bridge fuel, I consider it to be an integral part of the future energy mix.”

Novatek has come a considerable way in the past five years, emerging from the confines of the Russian gas market to become a major global LNG player. The company brought on stream the three main trains of its flagship Yamal LNG terminal in 2017 and 2018, boasting a combined nameplate capacity of 16.5mn metric tons/year. The project allowed the company to target customers overseas for the first time. Novatek is now developing a second, larger terminal, Arctic LNG-2, with a nameplate capacity of 19.8mn mt/yr, due to start up in 2023.

The company has plans for a rapid expansion, targeting 70mn mt/yr of liquefaction capacity by 2030. This extra gas can help decarbonise coal-heavy energy systems in Asia, providing reliable, low-cost power where renewables can fall short, Gyetvay says. The CFO hit back against increasing calls in the West to restrict oil and gas investment – a policy that the International Energy Agency (IEA) included in its recent Net Zero by 2050 scenario. The Paris-based agency’s scenario fails to account for regional differences in energy mixes and economic growth paths, Gyetvay believes.

“To raise the standard of living, and increase economic prosperity, you’re going to need more energy,” Gyetvay says. “There needs to be an honest debate. To say that no new investments in oil and gas are needed post 2021 is a totally ridiculous comment. It does not lead to an energy transition, but instead, an energy crisis.” 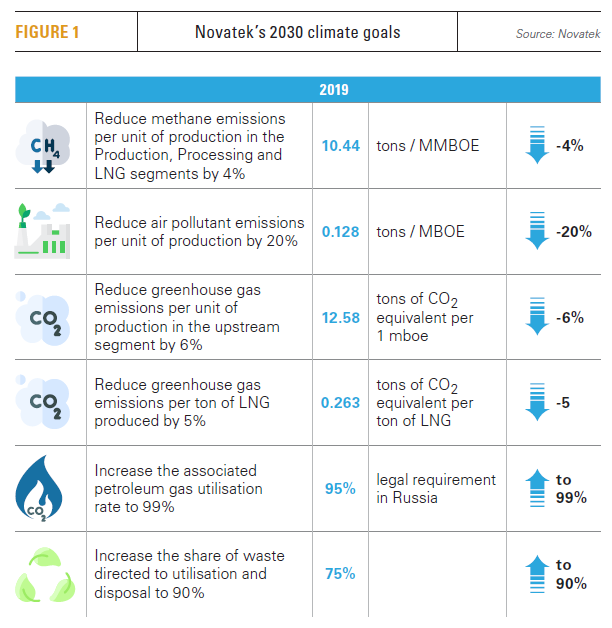 Many leading international oil and gas operators have set goals to reach net-zero emissions by 2050, although Novatek and its Russian counterparts are yet to follow suit.

These are “aspirational” goals that lack “concrete steps in place today to get to them,” Gyetvay says. Novatek’s own climate targets (Figure 1) are set for 2030, within the time scale of its strategic planning.

“This means that we will be held accountable because it’s a much shorter period,” Gyetvay says.

The CFO also calls for the climate conversation to shift from looking only at CO2 to looking at all greenhouse gas (GHG) emissions including methane.

As NGW reported in February, Novatek has an edge over some of its Russian counterparts as it is predominately a gas rather than oil producer and gas is inherently cleaner. And as a gas company with its assets all concentrated in clusters in northwest Siberia, it also has an easier job handling associated petroleum gas. Analysts have also noted to NGW that the company benefits from having mostly modern and environmentally cleaner facilities, whereas other Russian producers like Gazprom Rosneft are saddled with a lot of Soviet-era oil and gas infrastructure.

“We see other steps that we can take in our operations that we feel can lower our carbon footprint even further, although we believe we are one of lowest greenhouse gas emissions companies in the world already,” Gyetvay says.

Novatek is considering a range of technologies to decarbonise its LNG facilities in the Russian Arctic, including the use of wind and hydrogen as energy sources, as well as carbon capture and storage (CCS). Specifically, it is studying the potential conversion of one of Yamal LNG’s gas turbines to run mostly on hydrogen and signed a memorandum of understanding in June with Finland’s Fortum on wind energy supply for the facility.

Over the past year and a half, Novatek has also been investigating geological structures on the Yamal peninsula that could be suitable for CCS, Gyetvay says, adding that the company hopes to take a final investment decision (FID) on the plan in 2022. The obstacle here is that there is currently no legislation in place to govern CCS development in Russia, although the government is working on this. CCS is critical for producing low-carbon hydrogen from natural gas.

In addition, Novatek is using gravity-based structures at Arctic LNG-2 rather than fixing the facility onshore, which reduces the impact on permafrost.

In recent years the trade of green or carbon/GHG-neutral LNG has been gaining momentum, even though it still accounts for a miniscule share of overall LNG trade, with only 15 such cargoes having been sold in the past two years. LNG shipments can be counted as green if their emissions are offset with certificates generated from projects that reduce or avoid emissions, and the idea is that these cargoes could fetch a higher price on the market.

Gyetvay is sceptical that green LNG will secure this premium, however. Rather, he believes that companies like Novatek will increasingly have to take heed of what their customers want and respond accordingly, and that all LNG will ultimately become green.

Novatek is also studying a plan to produce low-carbon fuels. The company was planning to build another 5mn mt/yr LNG terminal in the Arctic known as Obsk LNG on the Gydan peninsula. But it delayed taking a final investment decision on the venture last year. According to Gyetvay, the project has been reconfigured to produce ammonia, methane and hydrogen. While the hydrogen would likely be used domestically, ammonia and methanol could be exported. Obsk LNG may still produce LNG but probably in smaller volumes, Gyetvay says, noting that no final decisions have been made.

Moving forward, Novatek hopes to take FID on its next major liquefaction project in 2023 or 2024 at the latest, Gyetvay says. He was referring to Arctic LNG-1, which will exploit gas at the Soletsko-Khanavaiskoye, Geofizicheskoye and Trekhbugornoye fields on the Gydan peninsula to produce an expected 19.8mn mt/yr of LNG. 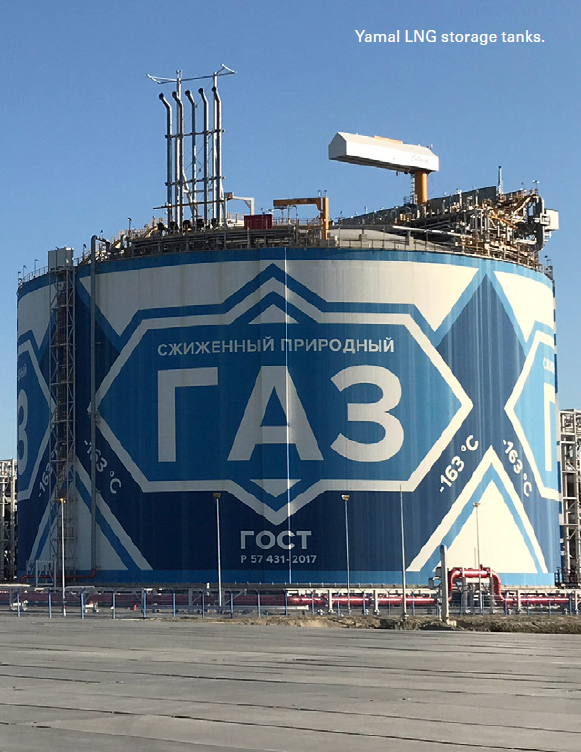 Further ahead will be Arctic LNG-3, which will also boast a 19.8mn mt/yr capacity, underpinned by resources in the Gulf of Ob that divides the Gydan and Yamal peninsulas, where Novatek made a significant gas discovery in 2018. Arctic LNG-3’s development will likely get underway in the 2030s, according to the CFO.

Arctic LNG-1 has already attracted “strong partnership interest” but more exploration is needed before Novatek can begin the farm-out process, Gyetvay says. Partners will be necessary to share risks and costs, as was the case at Novatek’s Yamal LNG and Arctic LNG-2 facilities, he says. The company will look to retain at least a 60% interest in the project.

Novatek commissioned a 0.9mn mt/yr fourth train at Yamal LNG in January. Despite its small size, the project is significant as it will showcase Novatek’s proprietary Arctic Cascade liquefaction capacity, which takes advantage of the low ambient temperature in the Arctic to increase efficiency. The project will need to operate for 12 to 18 months to assess the technology’s performance over the course of different seasons and adjustments will be made if necessary, the CFO says.

As part of efforts to boost local content, Novatek has also developed its own LNG construction yard in Murmansk for its future projects.