There are two main myths concerning green hydrogen, repeated by many organisations:

Variations on the above themes include subjective statements such as "Electrolysis from surplus renewable energy is unambiguously beneficial for the environment –but it’s not very efficient.

Electrolysers take around 55 kWh of electricity to produce 1 kg of hydrogen. This figure is expected to go lower to possibly 50 kWh. The 55 figure applies to currently deployed electrolyser technologies such as PEM and alkaline. 1 kg of hydrogen has an energy value of 40 kWh giving an efficiency of around 72%. This could rise to 80%. According to the BBC (see above), this is "not very efficient".

At a large-scale (100 MW+) electrolysers will be connected directly to renewable sources. The cost of electricity will be defined by a PPA (power purchase agreement) between the electrolyser owner/operator and the renewables generator. Current developments suggest they will be the same.

Off-shore wind is now delivering power prices that are at parity with market prices for electricity. Taking a price of €40/MWh (or 4 eurocents/kWh) gives a cost for 1 kg of green hydrogen of €2.2/kg or 5.5eurocents/kWh.

The table below shows the overall costs per kWh of green hydrogen, including capital costs that make up around 20% of a final cost of 7.3eurocents/kWh. 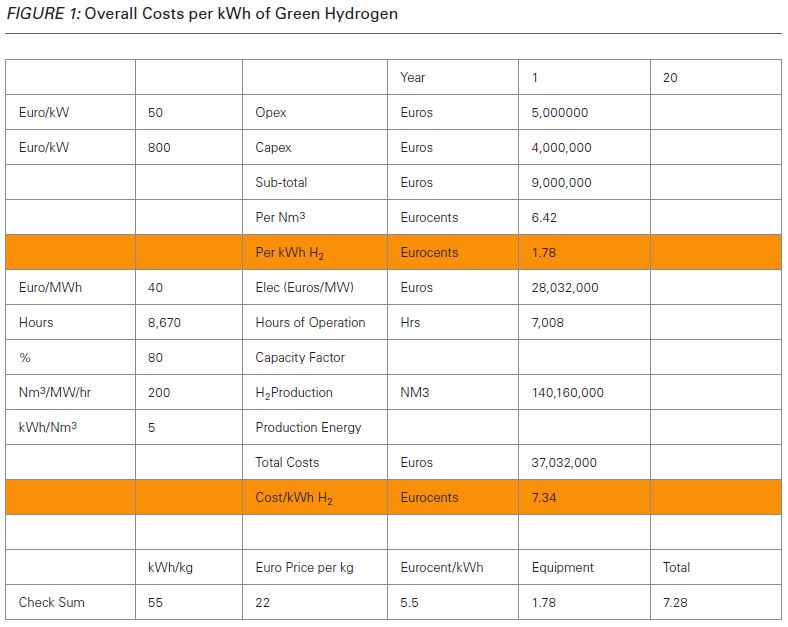 As it currently stands, green hydrogen at a price of 7.3eurocents/kWh is roughly 39% more expensive than hydrogen produced from natural gas, once carbon market costs are included. Foster Wheeler produced a report on CCS applied to SMR. This suggested an overall cost for hydrogen of 4.58 eurocents/kWh with 80% capture (but no transport & storage costs). This suggests that SMR plus CCS and payments for the 20% of carbon not captured will be at least equal to if not greater than the SMR+ETS price mentioned above.

Key point: there is a difference in the price of SMR hydrogen and green hydrogen. Currently about 39%, technology developments will reduce this but are unlikely to eliminate it. However, it is not a multiple of 6 as suggested in this video: https://www.powerfuels.org/newsroom/powerfuels-at-the-european-sustainable-energy-week-19th-june-2019/ @ 54.48.

There is something deeply wrong when the head of Hydrogen Europe can assert that green hydrogen costs 6x more than hydrogen from SMRs.

Capital costs account for perhaps 20% of the overall price of a kg of hydrogen. The formula below summarises the key elements:

The percentages represent the split between the expected capital costs and the key input, electricity. It is assumed that electricity is purchased via a "power purchase agreement" (PPA) directly from renewable producers via private wire (thus avoiding most network and environmental taxes). Electricity costs will thus be very close to wholesale prices.

Reduction in capital costs is useful but overall has a marginal impact. Arguably, a more expensive electrolyser system which pushes efficiencies towards 80% will have a great impact on green hydrogen production costs with efficiency driving costs down, more than offsetting the capex increases.

That this fact is not very well understood is illustrated by a recent report (10 July) from investment bank HSBC, Global Hydrogen. This states:

OEMs believe that industrialisation can drive a 30-50% drop in equipment costs by 2025 and a 70+% fall by 2030 compared with current levels. This is key to green hydrogen reaching cost parity with grey hydrogen and ultimately enabling the decarbonisation of wide segments of the global economy such as transport, heavy industry and heat.

They don’t say which OEMs. Electrolysers are process equipment. The major cost for any system which is a continuous process is input costs, in this case electricity and de-ionised water.  Furthermore, once a process runs above a certain capacity factor (in this case circa 40%) capex as a major cost factor fades into the background.

PEM manufacturer Hydrogenics in a public presentation noted that balance: electricity vs other costs was 80/20. Even the IEA in one of its publications on the subject showed a cost curve of price vs utilisation which confirmed the flat after 40%.

The HSBC report itself acknowledges that indeed in the USA "solar auction bids have come in well below USD20/MWh and onshore wind PPAs in windy areas such as Texas are below USD25/MWh", which rather rams home the points made above: green hydrogen using, for example, electricity from Texan wind or PV is ALREADY at 2030 prices.

Green hydrogen has a big advantage over grey or blue hydrogen: the costs are firm. Capital costs are known, electricity costs are known and the performance of electrolysers are known. By contrast, CCS costs and their impacts on SMR hydrogen are less well understood and cost of natural gas fluctuate strongly.

Mike Parr is an independent technical energy consultant based in Brussels. He is co-founder, with Simon Minett, of Green H2 for Europe, a blog and website which follows developments in green hydrogen.

From the Editor: How time flies [GasTransitions]