The study, “Phase II – Pathways to 2050”, is a follow-up to a report published in February 2019 by the two companies, Infrastructure Outlook 2050, in which they analysed what it will take for Germany and the Netherlands to transition to a decarbonised energy system. Tennet and Gasunie are the Dutch electricity and gas transmission system operators, but both are also active in Germany. The study was actually prepared by experts working in the German subsidiaries of the two companies. 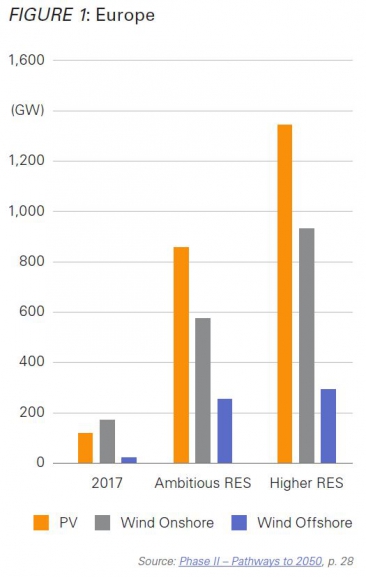 The study uses two demand scenarios and two supply scenarios to come up with three combined scenarios with different levels of electrification on the demand side and different levels of renewable energy generation on the supply side. This results in very complex outputs, which we won’t try to discuss here in detail. (Interested readers may consult the original reports.) Instead, we will highlight some key findings that are mentioned in the report that should be of particular interest to our readers.

What is clear from all the supply scenarios is that a large expansion of renewable energy generation is required if climate targets are to be met. This is not a surprise of course, still the growth that is needed looks quite daunting (Figure 1).

Even these levels of carbon-neutral generation, however, cannot meet the demand in either of the two demand scenarios, one of which is based on “high electrification” and one on “high gas demand”. This is shown in Figure 2, a key graph from the report.

Note that total energy demand is higher in the “high gas” demand scenario. This is because “most gas-based applications have a lower efficiency compared to electric applications”, notes the report. In addition, the use of power-to-gas units leads to conversion losses. On the other hand, a high share of gases “reduces the stress on the electricity system”, according to the report. In addition, the gas sector can provide “substantial transport and storage capabilities”.

The main conclusion from the graph is that there will be a gap between demand and supply under any scenario, which will have to be covered by imports. How high imports will be depends on the scenario (Figure 3). 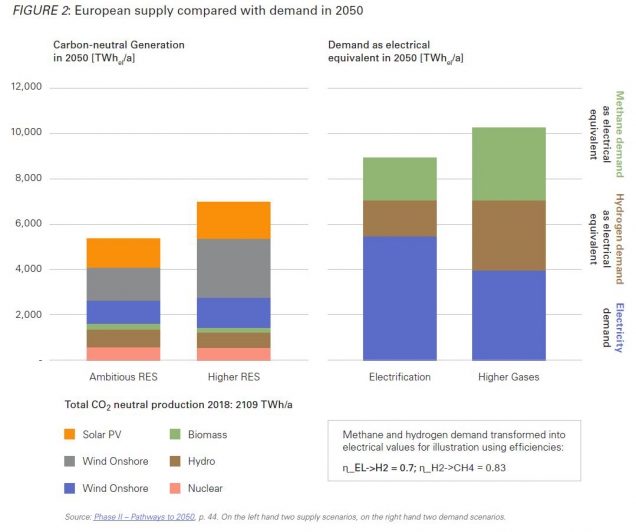 The graph shows that not only hydrogen but also high amounts of methane will need to be imported. This is because the domestic production of synthetic methane in Europe is unlikely to be profitable. Synthetic methane plants, which convert hydrogen to methane by adding CO2, involve an additional conversion loss compared to green hydrogen production. The question is, however, whether other countries would find it economical to produce synthetic methane and ship it to Europe, as these results assume, or whether the methane will come in the form of natural gas.

As to the prospects for the domestic production of green hydrogen, the more renewable energy is generated, and the lower the electrification rate, the more potential there is for green hydrogen production in Europe. This is illustrated in the Gas&RES+ scenario, in the middle of the graph. This scenario, however, throws up another question. It projects that 110 GW of electrolysis capacity will be installed in Germany and the Netherlands alone by 2050 – quite a large amount. At this moment, only a few megawatts of electrolysis capacity have been built, and 2030 targets in both countries are around 3 or 4 GW each. This would imply a massive expansion of electrolysis capacity after 2030. 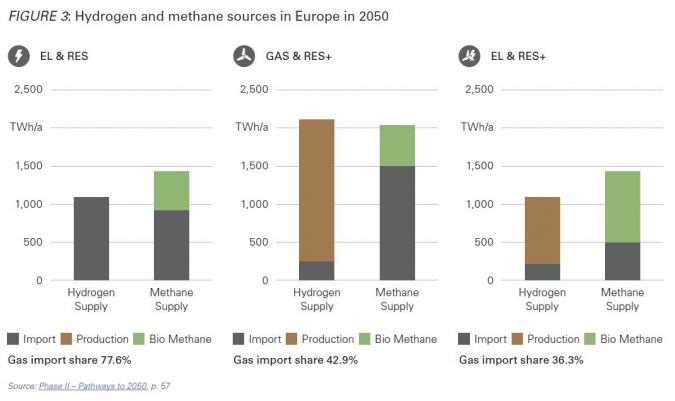 One more noteworthy result from the study: considerable backup power generation capacity will be needed in the system even if various flexibility options are used. There will be times when power plants are needed to cover 50% of electricity demand. These power plants, however, will have very low utilisation rates, so some regulatory model will need to be developed to allow their exploitation, the researchers point out.

The study ends with the conclusion that investment decisions across all parts of the value chain (supply, demand, infrastructure) will need to be coordinated closely “to avoid inefficiencies”. Climate goals “can only be achieved with an integrated European energy system,” the report notes. The authors do not say so explicitly, but the implications of this conclusion seem clear: the decarbonisation of the European energy system is going to be extremely challenging.