The race for battery storage capacity is on. In countries like Australia and the US, an increasing number of ever-larger battery grid storage projects are being announced. They are likely to increasingly replace gas-fired back-up power plants. At the same time, China, the US and Europe are in a race to build battery gigafactories to supply the growing EV market. According to Simon Moores of Benchmark Mineral Intelligence, we are on the verge of a “global lithium-ion economy”.

In the electricity system, batteries are a direct competitor of natural gas power plants that serve as backup power. And utility companies are more and more opting for battery storage systems rather than gas plants.

“2021 is shaping up to be the year in which battery storage takes a big step toward being an essential part of the grid, rather than operating at the edges”, reports Dan Gearino of Inside Climate News. According to Eric Gimon, policy adviser for the US-based think-tank Energy Innovation, the market for big battery projects “has crossed a threshold. We are living in a period when batteries have arrived.” 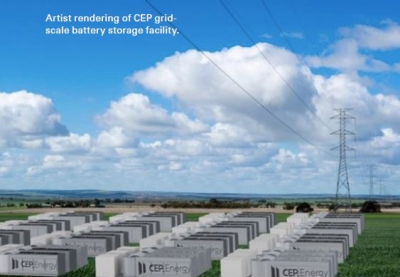 As an example, Gearino points to the 300 MW battery storage facility that came online in California in December 2020, the largest in the world. Built by Vistra Moss Landing Energy Storage, the system runs for four hours and produces up to 1,200 MWh of electricity before it needs to be recharged. A second phase, of 100 MW, is under construction. The company ultimately wants to increase the capacity of the project to an unprecedented 1,500 MW (6,000 MWh).

The Vistra facility won’t be the biggest for long. Manatee Energy Storage Center in Florida is building a 409 MW facility for utility NextEra Energy, which will come online at the end of 2021.

NextEra has also brought online a 115 MW lithium-ion battery storage system added to its existing 132 MW Blythe Solar II facility in Riverside County, California, reports IEEFA (Institute for Energy Economics and Financial Analysis). In addition, NextEra has agreements with SCE to add another 115 MW at its Blythe Solar III system and 230 MW at its adjacent McCoy Solar Energy Project. It also has a 15-year contract with PG&E Corp’s operating business, Pacific Gas and Electric Co, for 63 MW of storage at the Blythe Solar 110 Project (Blythe Solar I) project, notes IEEFA.

Later this year, the contiguous Blythe and McCoy site will feature 532 MW of energy storage charging on 761.6 MW of solar generation, making it by far the largest such complex in the US.

In total, NextEra has long-term contracts to bring online 1,646 MW of energy storage in 2021 and 2022, largely four-hour systems at new and existing solar farms in the US West, the company showed in an investor presentation in January. Another 955 MW of three- and four-hour storage projects are under contract to start up in 2023-2024. By comparison, NextEra had agreements to add 20 MW of battery storage in 2019 and 2020, notes IEEFA.

Greentech Media reports that battery storage notched two big wins in New England recently. “San Francisco-based developer Plus Power won two bids in the latest capacity auction held by the New England ISO, which operates the transmission grid and competitive power markets in six Northeastern states,” writes Greentech. “That means that these two battery plants offered a compelling enough price to edge out some fossil fuel plants for delivering power on demand. And they did it without any help from federal tax credits because none of them apply to standalone batteries.”

Greentech Media adds that Plus Power will build a 150 MW/300 MWh system near a cranberry bog south of Boston, Massachusetts and a 175 MW/350 MWh battery in Gorham, Maine. The seven-year capacity contracts start in June 2024.

Another hotspot for battery storage projects is Australia. In February, CEP.Energy, a company chaired by former New South Wales Labor premier Morris Iemma, announced plans to build what it says will be the “world’s biggest battery” – 1,200 MW – at the industrial centre of Kurri Kurri in the Hunter Valley. As Giles Parkinson of Reneweconomy.com notes, this is “right where the Morrison government wants to build its own gas-fired generator.”

The CEP plans follow on from the announcement last October that the company would build a network of industrial-scale rooftop solar and battery storage installations, totalling up to 1,500 MW.

Peter Wright, the CEO of CEP and a former executive of investment bank Macquarie, says this will make CEP the biggest owner of battery storage assets in Australia, although France’s Neoen, which owns the Hornsdale Power Reserve and is building a 300 MW/450 MWh big battery at Geelong and a 900 MW/1,800 MWh battery at Goyder South, and is also considering a 500 MW big battery near Sydney, may contest that claim. 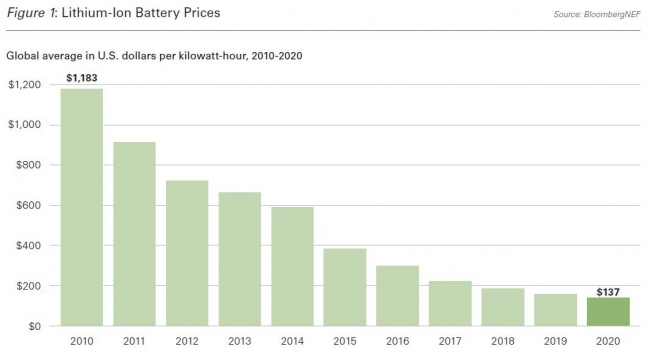 According to Parkinson, the facility to be built by CEP “is likely to kill plans by the Morrison government to have its wholly-owned utility Snowy Hydro build a 1,000 MW gas plant in the same area, ostensibly to help replace capacity lost by the impending closure of AGL’s Liddell coal generator.”

In February, the UPC/AC Renewables Australia joint venture announced it has secured debt finance for a 400 MW solar farm in northern NSW, the first stage of what is planned to be a massive 720 MW solar project and a 400  MWh big battery, among the biggest in the country.

The statement from UPC and AC says that debt financing for the initial 400 MW stage of the New England Solar Farm, near the town of Uralla, was secured from Westpac, Commonwealth Bank of Australia, and Bank of China – despite the lack of a long-term power purchase agreement.

In Western Australia, the Labor Party announced plans in February to build and install 1,000 standalone power systems (SAPS) including solar, battery storage and hydrogen electrolysers across its grid over the coming five years, as part of a $259 million policy package to boost green manufacturing in the state, according to news site One Step Off the Grid.

The report notes that SAPS are “an increasingly popular solution to remote and regional power supply that is already somewhat of a specialty of Western Australia’s government-owned network companies.”

In Europe, energy storage is also moving higher up the agenda in many countries. The Spanish government, for example, has a target of building 20 GW of storage capacity by 2030, more than twice the current capacity. Spain wants to add large-scale and small-scale battery systems to its current capacity which comes mainly from pumped hydro.

In Germany, the number of battery storage systems linked to a residential solar PV array rose by around 50% in 2020 for the third year in a row. The country's solar association BSW estimates there were 88,000 new residential installations, taking the total number of solar batteries in Germany to about 270,000.

The number of homeowners installing a solar array doubled last year, and every other system was extended with a battery. "We expect that the demand for storage will continue to increase," said BSW Managing Director Carsten Körnig. He added demand was being driven by lower prices, a growing awareness of climate protection and an increased desire for independence on the part of consumers.

The battery storage boom, notes Inside Climate News, is partly driven by the steady decline in lithium-ion battery prices: from $1,183 per kWh in 2010 to just $137/kWh in 2020, according to figures from BloombergNEF.

Meanwhile, the market for lithium-ion batteries for EVs is also growing spectacularly. According to Simon Moores, Managing Director of Benchmark Mineral Intelligence, writing in the Oxford Energy Forum of February 2021, “the coronavirus pandemic has turbocharged the lithium-ion-battery-to-electric-vehicle (EV) supply chain and accentuated a global battery ‘arms race’ between China, the United States, and Europe. The build-out of this supply chain is the blueprint for the 21st century automotive and energy storage industries …” 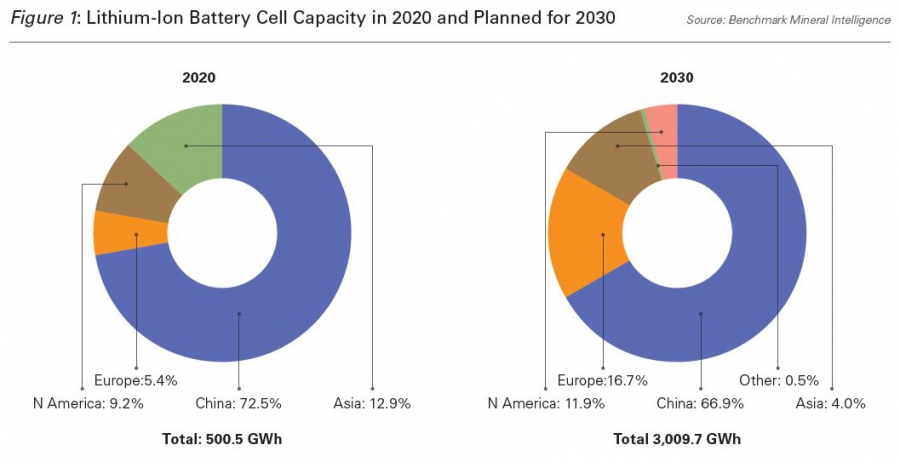 Data from Benchmark Mineral Intelligence show that the number of individual battery gigafactories in the pipeline over the next 10 years increased from 118 in 2019 to 181 in 2020. For context, only four were being planned in 2015, notes Moores. Of the 181, 136 are based in China, 10 in the US, and 16 in continental Europe.

According to Moores, “battery megafactories are super-sized producers of lithium-ion battery cells, which will be the platform technology for all EVs, and China has taken the initiative to build battery capacity at speed and scale. Of the 181 battery megafactories in various stages of planning and construction, 88 are currently active, making cells for EVs.”

Moores notes that China is far ahead of the US and Europe in this market: “In terms of battery capacity, in 2020, cell capacity plans to 2030 increased by 845 GWh to a fraction over 3 TWh. This is the biggest single annual increase in pipeline battery capacity since Benchmark started collecting this data in 2014. China once again surged ahead in 2020 by building even more lithium-ion battery megafactories and increasing future capacity. Of the total capacity of all of the lithium-ion battery plants either active or under construction, China accounts for 66.9 per cent, while the US is only forecasted to account for 11.9 per cent…. China is building one battery gigafactory a week; the US one every four months.”

Moores believes that battery gigafactories “could become geopolitical hot potatoes.” The “battery arms race” demonstrates “a fundamental shift for a number of the world’s most important industries – the implications of which are fully understood by European and Chinese leaders but less so in Washington, DC.”

This shift, says Moore, “is the ability to store energy in widespread locations, both large and small, at a reasonable cost. Lithium-ion batteries make this possible, and they are becoming more abundant as well as better and less expensive. The lithium-ion battery megafactory is an engine for growth.”

Technological improvements, falling costs, and increasing prevalence are driving what Benchmark has called the creation of a “global lithium-ion economy,” writes Moores. “Lithium-ion batteries are the enabling technology for the 21st century automotive industry and will be a disruptive technology for the 21st century energy and utility sectors—the first widespread energy storage to couple with increasing production of wind and solar power. Those that control these supply chains will control the balance of industrial power for the remainder of this technological cycle, which could last well into the 22nd century. And the lithium-ion battery supply chain is at the heart of any global lithium-ion economy. It is crucial for governments to understand this.”