China’s five-year plans have often provided important insights into Beijing’s thinking about future energy developments. But the 14th Five-Year Plan to 2025, approved in March by the National People's Congress (NPC), provides little detail on energy in general or the prospects for gas and LNG in particular.

This partly reflects the exceptional circumstances and uncertainties surrounding the Covid-19 pandemic. In addition, the government plans to publish sectoral studies this year or next, which will provide more detail on the energy market. 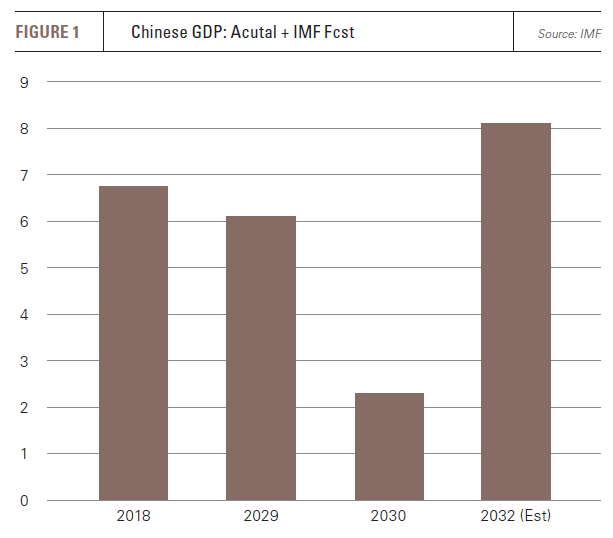 However, the lack of detail also appears to reflect Beijing’s changing approach to economic management. Take GDP growth (Figure 1), for instance. This increased by 2.3% year on year in 2020, according to the National Bureau of Statistics (NBS), making China one of the few countries to register growth against the background of the Covid-19 pandemic.

Future growth is expected to be higher. Premier Li Keqiang told delegates to the NPC that GDP growth in 2021 is projected to exceed 6% year on year.

However, most independent analysts forecast significantly higher GDP growth for 2021. Both the International Monetary Fund and World Bank have projected growth of 8.1%. Swiss bank UBS’ latest projection is higher still, its mid-March forecast upping its earlier estimate of 8.2% to 9% as the Chinese economy, and its export markets, bounce back from the pandemic.

It is unusual for China’s official growth projections to undershoot those of independent analysts. Even more unusual – indeed, a first – is China’s decision to omit annual GDP targets from the 14th Plan.

Explaining this, the deputy director of the National Development and Reform Commission, Hu Zucai, said Beijing would only announce targets for years beyond 2021 during the year in question. This would allow greater flexibility at a time of internal and external uncertainty, he added.

This makes sense in many respects, but makes it difficult to assess Beijing’s expectations about future energy demand. The 14th Plan commits China to cutting energy consumption and CO2 emissions per unit of GDP by 13.5% and 18%, respectively, between 2020 and 2025. But the absence of GDP growth projections makes it hard to assess the resultant level of energy consumption, let alone its breakdown by fuel type.

That said, there are indications that GDP growth to 2025 is officially expected to approach but not exceed 6%/yr. The People’s Bank of China said in March that GDP could average up to 5.7%/yr to 2025 without triggering inflation, suggesting growth beyond that level would be capped. This chimes with the World Bank’s projected growth of 5.4% in 2022 and 5.3% in 2023, following 8.1% in 2021.

GDP growth of 5.7%/yr could result in a 2-3%/yr increase in energy demand based on recent trends. Primary energy consumption grew by about 3%/yr from 2015 to 2019, according to the BP Statistical Review of World Energy, a period when GDP grew by just under 7%/yr.

That period saw a 15% fall in energy consumption per unit of GDP – greater than the 13.5% targeted by 2025. The fall in large part reflected the shifting composition of Chinese GDP, with energy-intensive industrial activity losing ground to services.

With a further shift expected in the composition of GDP it seems likely that the 13.5% target will be easily achieved. But whether that will be sufficient for China to meet its target of peak emissions by 2030 will depend on the shifting composition of energy supply.

The 14th Plan includes few details about how demand will be met apart from saying non-fossil energy is targeted to increase from 15.9% of the total in 2020 to 20% in 2025. This will include an increase in operating nuclear capacity from the current 52 GW to 70 GW, several big-ticket hydropower projects, and large-scale investment in renewable energy. 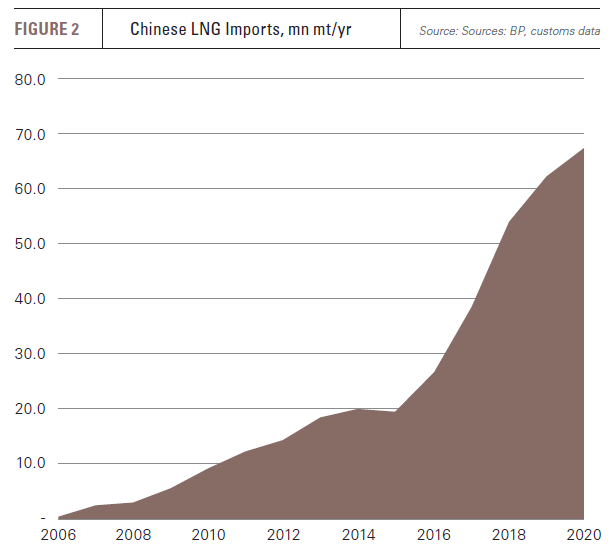 But the 20% target implies fossil energy will still account for 80% of supply in 2025. It will also have to increase in volume terms if the anticipated growth in energy demand is to be met.

This will require increased coal use, which is seen by Beijing as key to maintaining a reasonable level of energy self-sufficiency. Coal’s share of total energy supply fell from 72.4% in 2005 to 56.8% in 2020, with actual consumption falling in the mid-2010s. But it began increasing again from 2018, with the NBS reporting growth in 2020 of 0.6% to just over 4bn mt.

This trend is likely to continue. The China National Coal Association has said output in 2025 could reach 4.2bn mt, with coal expected to remain the dominant fuel in the power sector well beyond 2025. In 2020, about 38.4 GW of coal-fired generation was commissioned, according to Global Energy Monitor’s global coal plant tracker, while another 73 GW was reported to have entered the project pipeline.

However, increased coal use need not stymie the potential for higher gas consumption. While there are no projections in the 14th Plan, there is a presumption that gas use will continue growing strongly.

Much of the jump in Chinese gas use in the second half of the 2010s came from the winter heating market as a result of coal-to-gas conversion programmes in northern Chinese cities. With the pollution that prompted the programmes still a serious problem in much of China, more conversion projects are expected. These will include initiatives in the commercial and industrial as well as residential sectors.

More gas use is also likely in the generation sector. In late 2020, gas-fired capacity totalled 97 GW, below the 13th Plan target of 110 GW.

In addition, gas plant utilisation is often low. Many gas-fired units are limited to operating at peak times because they are uncompetitive further up the load curve compared with coal plants. Gas-fired output of 236 TWh in 2019 accounted for only 3.2% of total generation, and was concentrated in a small number of areas, including Guangdong, Jiangsu, Zhejiang, Beijing and Shanghai.

However, it is expected that gas-fired generation will surge if carbon pricing or other measures sufficient to offset its competitive disadvantage are introduced. More output will also be needed to help balance grids which have a large amount of renewable capacity.

In December, the Oxford Institute for Energy Studies published Natural Gas in China’s Power Sector. The report, authored by Yan Qin, projected that 40-50 GW of new gas-fired plants could be added by 2025, when the power sector could require 75-80bn m3 of gas.

It is generally expected that gas use will surge in 2021. It will be needed to help fuel recovery from the pandemic, while severe weather at the start of the year resulted in high demand from the much-increased number of gas-based heating systems. This meant the national oil company CNOOC had to supply the sector with 24bn m3 in the 2020-21 heating season – up almost 25% year on year.

Demand is projected to continue growing thereafter. For instance, the CNPC’s highly-regarded energy research institute Etri has projected that consumption will reach 430bn m3 in 2025.

China’s renewed emphasis on energy self-sufficiency means as much gas as possible will come from indigenous sources. NBS data shows production in 2020 rose by 9.8% year on year to 189bn m3. Output in 2021 is also well up, with production of 34.8bn m3 in January and February, 13.5% higher year on year. Looking further out, Etri projects output will rise to 220-250bn m3 in 2025.

The remaining 180-210bn m3 of demand projected by Etri will be imported through pipelines and LNG terminals. Etri projects piped imports could more than double to over 100bn m3 in 2025 from 47bn m3 in 2020. The growth is based on the recently-commissioned Power of Siberia-1 pipeline adding 38bn m3/yr by 2025 to the 60bn m3/yr capacity of the Central Asian pipelines and the 10bn m3/yr capacity available from Myanmar, although actual volumes imported from Myanmar are currently much lower.

Etri’s projections for gas demand, output and piped imports indicate a gap of 80-110bn m3 that LNG would have to fill. Depending on the location of terminals and demand, this could be met from the 24 LNG terminals with almost 100 million mt/year (136bn m3/yr) capacity already operating or due to be commissioned by the end of 2021.

The 80-110bn m3 range may be on the low side for a variety of reasons. First, the flexibility of LNG delivery and pricing arrangements means it can accommodate rapid changes in demand.

According to the General Administration of Customs, imports surged 27.2% year on year to 14.04mn mt in the first two months of 2021. This flexibility contrasts favourably with that of piped gas. LNG growth in 2020 (Figure 2) came in part at the expense of piped imports, with LNG imports jumping 11% year on year to over 67mn mt, whereas piped deliveries fell 4.9%.

Second, constraints on the future level of domestic gas output may benefit LNG. In particular, China’s experience with shale gas has been disappointing to date.

Third, LNG demand could benefit from the gradual liberalisation of the gas market. The creation of PipeChina as the national pipeline company and owner of a fleet of LNG terminals has facilitated third-party access to the market, allowing more companies to contract their own LNG imports.

However, it is far from clear how far Beijing will be prepared to go in liberalising the gas market. Few government officials fail to accept that liberalisation has clear benefits, for instance in terms of price and customer choice. But officials’ instinctive reaction to uncertainty, for instance at times of price and supply volatility, is to re-impose centralised state control.

This is not surprising given the aversion to risk running through the echelons of government. But it is possible that the balance will shift in favour of liberalisation given the potential support it could offer to the implementation of President Xi Jinping’s centrepiece policies of reversing emissions growth before 2030 and achieving carbon neutrality by 2060.