The European biogas sector is poised for a period of accelerated growth. The production of biogas and biomethane has been growing steadily for many years in Europe, but the European Biogas Association (EBA) believes a doubling of production is possible by 2030, and a quadrupling by 2050, according to Harmen Dekker, who has been director of the association since April 2020. 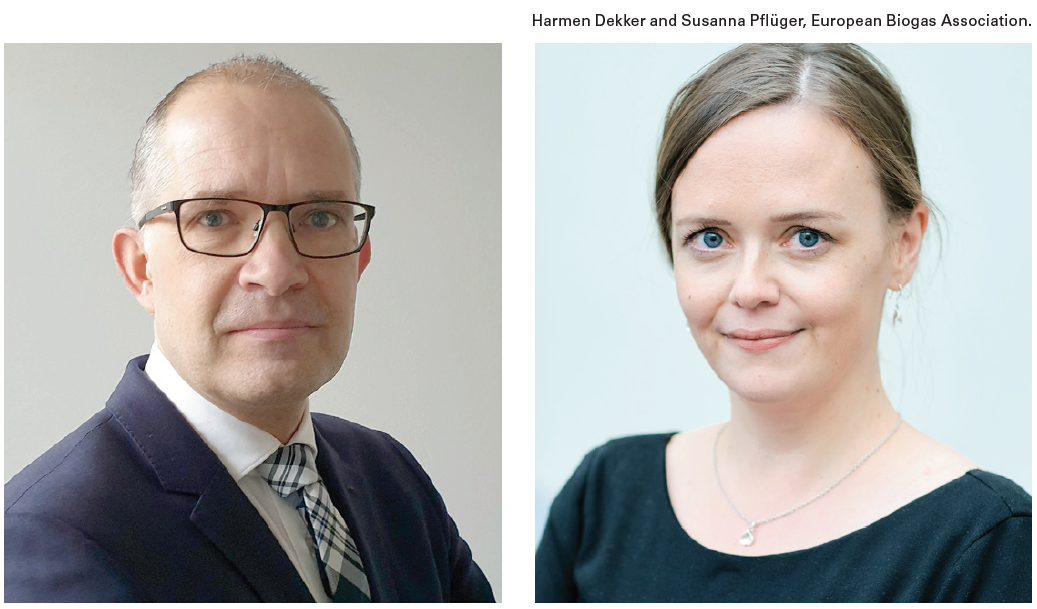 “All the major recent reports from think tanks such as the International Energy Association (IEA), Eurogas, Gas for Climate and CE Delft foresee that by 2050 biomethane will end up supplying 30-40% of total gas needs in Europe,” he says. That’s 95 to 120bn m3. The rest would be green hydrogen.”

Currently biogas, mostly used to produce electricity, takes up the lion’s share, but Dekker notes that most of the growth will come from biomethane, a direct substitute for natural gas. “Support mechanisms for electricity based on biogas are ending. But the demand for renewable gas is growing.”

Certainly big European gas and energy companies, such as Shell, Total and Engie, which are all members of the EBA, have taken note and are jumping on the bio-bandwagon. “Engie are investing big time in France,” says Dekker. “But also outside of France. Total is investing throughout Europe and in the US. They are all aiming to build a diversified gas portfolio.” 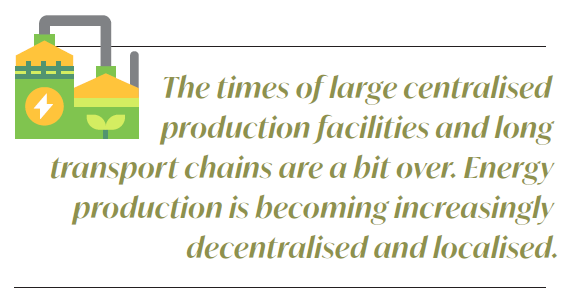 Susanna Pflüger, who joined the EBA 9 years ago and before that worked for Shell and Fuels Europe, the association for refineries, says interest from the major energy players in biogas has increased markedly in recent years. “We started with two people in the EBA nine years ago. Eurogas [the association of European gas companies] had zero interest in us. At the time we cooperated mostly with renewable energy associations, who saw gas as the enemy, not with the gas sector.”

Now times have changed. “We still cooperate with bioenergy associations but we also work more closely with the gas industry.” Pflüger welcomes the input of the major players. “When companies like Shell and the big French companies talk with the European Commissioners, they mention biogas. That helps us. We get more visibility and public awareness that way. Policymakers are now actively contacting us. We don’t need to explain anymore what biogas is.”

Nevertheless, biogas and biomethane are a very different business than natural gas. The activities are much smaller-scale and more localised. To import feedstock from other continents or even other countries does not make sense from an environmental perspective, concedes Pflüger, although she adds that “by combining local resources biowaste plants can be quite big.”

Will big companies be able to adapt their business model to become successful in this kind of market? “They will have to,” says Dekker. “The times of large centralised production facilities and long transport chains are a bit over. Energy production is becoming increasingly decentralised and localised.”

According to Dekker, the biogas sector offers big players an ideal opportunity to become more engaged at the local level. “Biogas,” he notes, “is not just about renewable energy. We produce quite a bit of renewable energy – enough for example to provide a whole country like Belgium with renewable gas – but we do more than that. We offer a solution to the waste problem. We support the agricultural sector. We help to increase soil biodiversity.”

Biogas companies, says Dekker, “are embedded in the local community and form part of the circular economy. This is precisely why those big companies are investing in the sector. They know we are green developers within society and they want to be able to play that role. At the same time, the fact that they are investing in our sector shows we are professional and have a lot of potential. We need them to accelerate.”

However, the sector still faces serious bottlenecks. Although biogas and biomethane have been getting more attention, European policymakers are focused mostly on promoting renewable electricity and hydrogen, says Pflüger. “They say they are technology-neutral, but the regulations are not. They are picking certain technologies as winners. They talk about sector integration, but they still do not take biogas fully on board.”

As an example, Pflüger mentions the CO2 standards for cars, which are based on tailpipe emissions rather than full lifecycle assessment (LCA) or well-to-wheel calculations. “They only look at what’s coming out of the car, not what went into it. But electricity at the EU level is still based on fossil fuels for more than fifty per cent. They don’t take that into account. For gas they want to know the full lifecycle emissions, but in electricity they don’t care how it’s produced. That’s a major problem for us. It seems they want to close down biogas and biomethane in transport.”

According to Pflüger, the European Commission is divided on transport policies. “DG MOVE [the Directorate-General for Transport] has nothing to say on emissions. This file is handled by DG CLIMA [Director-General for Climate], which has a very specific vision on zero emission mobility. DG CLIMA doesn’t seems to believe that our sector is capable of scaling up.”

Dekker argues that the use of biogas in transport presents a major climate opportunity right now. “Cars running on biogas have a lower carbon footprint than any electric vehicle. They are cheaper. They are readily available. The technology exists, the cars are there. They have a longer range than a battery car. In heavy duty transport and shipping, you can use bio-LNG. This is the best solution we have right now.”

All the attention that is currently being heaped on green hydrogen is also making the biogas sector “a little jealous,” admits Dekker. “Green hydrogen is fine, we have no quarrel with that. But to reach carbon neutrality by 2050, we need to start now, not wait for green hydrogen to scale up, which will still take many years. We should start with technologies that are available and scalable, such as ours.”

But he is optimistic that biogas and biomethane will be further recognised as solutions in the upcoming “Fit for 55” package which the European Commission is expected to present in June, and which will outline the measures aimed at realising the EU Green Deal. The EBA is calling for a renewable gas target in addition to a higher CO2 price. It wants 11% of gas used to be renewable by 2030, with a sub-target of 3% for renewable hydrogen and 8% for biomethane. (See “Setting a binding target for 11% renewable gas”, Gas for Climate/Guidehouse, January 2021.)

It is not clear yet whether this wish will be honoured, but “people are starting to realise that hydrogen is not a silver bullet,” says Dekker. He also points out that electrification in the building sector is not as simple as people once may have thought. “In the Netherlands a report has just come out showing that going off gas costs €40,000 on average per household. For a village of 1,500 houses that would be €60mn. For that money you can provide more than 10,000 houses with fully green gas.”

Europe “ahead internationally” in biogas

According to Harmen Dekker, Director of the European Biogas Association (EBA), “Europe is definitely ahead internationally” in biogas production, but “other continents are catching up. Biogas in the US is booming. In Brazil and South America in general the sector is growing. In Asia fossil fuels still get a lot of government support, but there too biogas is catching on.”

The European production of biogas and biomethane has shown steady growth (Figure 1) for many years, with production shifting increasingly from biogas (usually used to produce electricity) to biomethane (a direct substitute for natural gas). 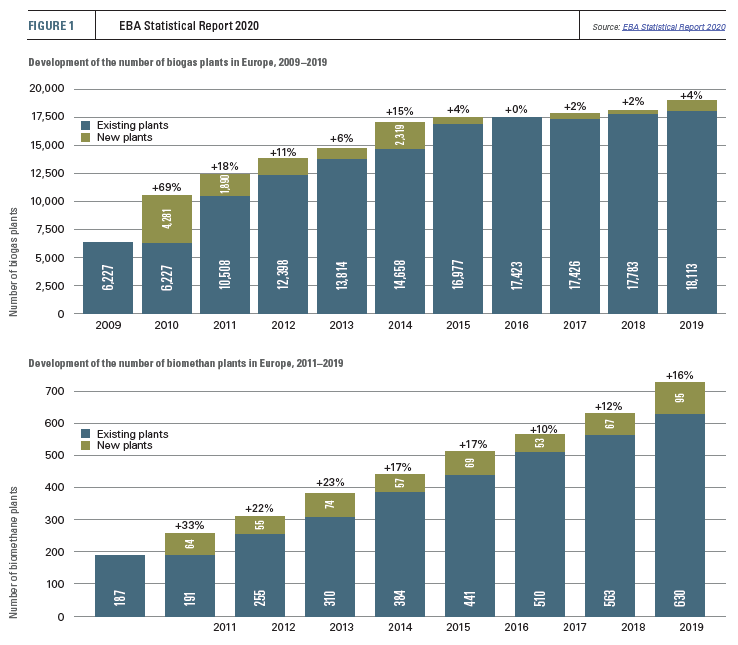 Germany is by far the largest producer of biomethane, with 232. France is next, with 123, followed by the UK’s 99.

Germany also has by far the largest number of biogas plants. The German lead is partly owing to generous subsidies for biogas facilities that used energy crops in the past. But this policy support has now ended.

As the EBA Statistical Report notes, there is “a clear trend in feedstock usage for biomethane production: 2013 saw the beginning of a move away from energy crops, towards agricultural residues, bio- and municipal waste and sewage sludge (Figure 2). From 2017, almost no new plants were established to run on energy crops.”