Of three major planned new LNG developments in the Brownsville area, it was announced in March that Annova LNG’s 6.5mn mt/yr project had fallen by the wayside, apparently unable to secure offtake agreements which would have allowed the developer to borrow funds to build.

This leaves the 4mn mt/yr Texas LNG, which is targeting an FID in early 2022, and NextDecade’s much larger 27mn mt/yr Rio Grande project, but only the latter has managed to secure any offtake agreements to date. Moreover, it too has suffered setbacks and is having to adapt to changing market preferences for LNG with a lower carbon footprint. 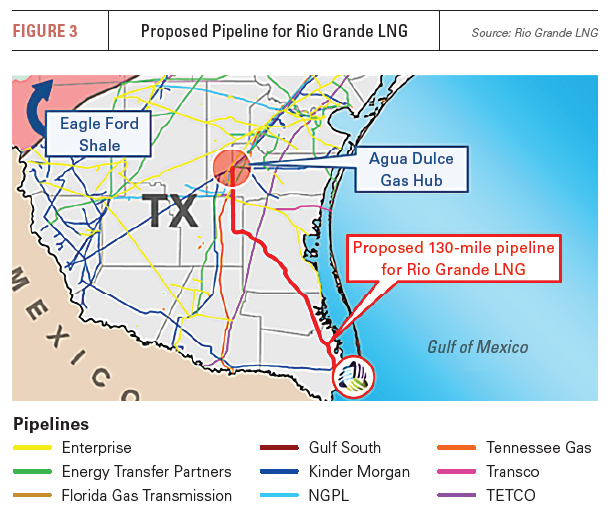 The project, which is located at the relatively uncongested Brownsville deepwater port, has a commitment from Anglo-Dutch major Shell to take 2mn mt/yr of LNG, but an additional agreement with European utility Engie for 2.9mn mt/yr fell through last year, owing to concern over the project’s emissions profile, according to reports at the time.

The sales and purchase agreement with Shell was negotiated on a free on board basis with full destination flexibility and is linked 75% to the price of Brent oil and 25% to domestic US gas price indices, including Henry Hub. The first phase of the project is expected to comprise two 5.97mn mt/yr trains, leaving NextDecade some way short, for the moment, in terms of agreed offtake.

But the project has attracted backers beyond Shell. In October 2019, Abu Dhabi-based Mubadala Investment Company reached an agreement to purchase $50mn of NextDecade’s common stock in a private placement at a price of $6.27/share. The deal gives Mubadala the opportunity to contribute a certain amount of project-level capital once the FID is taken.

NextDecade also scrapped plans for a 16.5mn mt/yr LNG plant at Galveston Bay in January, following advice from the US Army Corps of Engineers that part of the project site falls under a special navigation designation, which would require Congressional approval to remove.

As a result, the company remains focused on Rio Grande and still hopes to take a final investment decision this year on the project’s first two-train phase.

NextDecade in March extended agreements with contractor Bechtel, keeping the pricing terms in place until the end of the year and extending the validity of the engineering, procurement and construction (EPC) contracts until July 31, 2022. This effectively buys more time to seal offtake agreements. The EPC contracts were signed in May 2019.

The fully wrapped lump-sum turnkey EPC contracts include cost, schedule, and performance guarantees. In addition to two or three liquefaction trains, phase one consists of two 180,000-m³ storage tanks and two marine berths at a total cost of $9.57bn.

The first two trains are expected to generate an EPC cost of about $543/mt. The EPC contracts include full site preparation activities, which are expected to further reduce the costs per ton of the remaining trains to below the first phase cost of $543/mt.

As part of the EPC deal, Bechtel undertook limited notice-to-proceed activities from June 1, 2019 to January 1, 2020 and agreed to accept up to $15mn in NextDecade common stock in consideration for certain activities.

NextDecade is moving to make its project more environmentally sustainable in order to jump to the front of the queue in the LNG project beauty pageant.

The company has formed a subsidiary called NEXT Carbon Solutions to develop what it says will be one of the largest carbon capture and storage (CCS) facilities in North America at the Rio Grande site.

It estimates that it will be able to reduce CO2 emissions from the plant by more than 90% without major design changes and that, although this represents a significant additional cost to the $15bn project, it would be 80% cheaper building the CCS capacity now rather than retrofitting it later.

The idea comes at an interesting time for CCS development and commercialisation in the US, which has more experience of CO2 management than is often recognised, owing to the extensive use of CO2 in enhanced oil recovery (EOR).

There are currently 10 CCS facilities in the US with a combined capture capacity of more than 25mn mt/yr. The country has over 100 sites where EOR is underway using CO2 and more than 8,000 km of CO2 pipelines. CCS is also a priority for US oil majors Chevron and ExxonMobil in their strategies to reduce CO2 emissions from oil and gas operations.

In addition, the regulatory environment has become more supportive of CCS in recent years. Most significantly, the US has a tax credit which currently provides $18/tCO2 for EOR and $29/tCO2 for dedicated geological storage, rising linearly to $35/tCO2 and $50/tCO2 respectively by 2026. Projects have to commence construction before 2024 to benefit from the credit.

NextDecade has a memorandum of understanding (MoU) with Canada’s Enbridge, dating from September 2019, to construct a pipeline to feed gas to the LNG plant, if it goes ahead. The Rio Bravo pipeline in southern Texas would flow up to 4.5bn ft3/d of gas to Rio Grande from the Agua Dulce area.

Rio Bravo consists of twin pipelines, each rated at 2.25bn ft3/d, which will each deliver gas to three of Rio Grande’s eventual six liquefaction trains. The 220-km pipelines lie within the state borders of Texas and therefore do not need federal regulatory approval.

The Agua Dulce area benefits from eight existing pipelines connecting it to the Waha gas hub with total capacity of 6.7bn ft3/d, while three further pipelines with combined capacity of 4.7bn ft3/d have also been sanctioned. This will allow the Agua Dulce area to attract significant volumes of low-cost natural gas from the Permian Basin and Eagle Ford shale.

The ability to acquire what is seen as essentially surplus gas from liquids production in the Permian Basin and Eagle Ford is a key part of the economic case for Rio Grande. Rather than pay Henry Hub prices, gas at Agua Dulce is expected to cost around $0.5/mn Btu, or lower, according to some estimates.

Although the collapse of oil demand in 2020, owing to the impact of the Covid-19 pandemic on transport, saw both US oil and gas production fall, both started to recover in the second half of last year. With the OPEC+ group retaining tough output restrictions, despite higher oil prices, US shale producers have a window of opportunity to boost output and capture market share.

And while many US shale companies say they are focusing on capital discipline as opposed to output growth in the current environment, both the US oil and gas rig counts have jumped since November, suggesting some producers cannot resist the lure of higher prices, which, in turn, is likely to ensure a steady supply of cheap gas in the Agua Dulce area.