One recent such effort was made by consultancy AFRY (formerly Pöyry) for Spanish utility Iberdrola, the second largest utility company in Europe after Enel. It sees the natural gas sector shrink considerably.

These are the main conclusions of a recent report from consultancy AFRY: 2050 Holistic & Efficient Roadmap for a Zero-Emissions EU Energy.

AFRY bases its projections on a “modelling suite” which “co-optimises gas and electricity networks” and allows for “dynamic optimisation of flexible demand side response and how this interacts with intermittent generation”. In other words, this is a zero-carbon scenario that is very much focused on maximum renewable energy penetration. Iberdrola, it may be noted, calls itself “the utility of the future”, and says it is the largest producer of wind power in the world.

For the gas industry it is interesting to look at AFRY’s projections for the heating sector, industry and power sector.

The European heating system largely relies on natural gas at the moment, notes AFRY. “However, as unabated natural gas becomes unavailable in a zero-carbon economy, it becomes particularly relevant to transition towards heat pump technologies, fuelled mostly by electricity.” 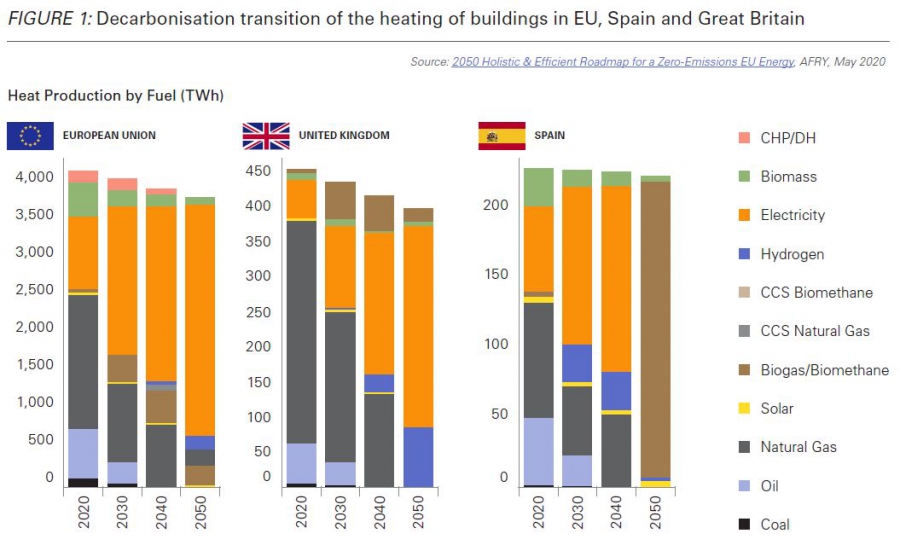 This is shown in Figure 1, which shows that air source heat pumps will cover 65% of total non-process heat in Europe by 2050. The remaining supply comes from “a number of new technologies such as hybrid heat pumps – which use a zero-carbon gas boiler (hydrogen or biomethane) to cover periods of cold temperatures, benefiting the system by reducing the required level of grid expansion and the need to build additional backup generation. In total, 80% of heat for buildings is produced from electricity by 2050 in Europe, either through full air source heat pumps or hybrid heat pumps.” 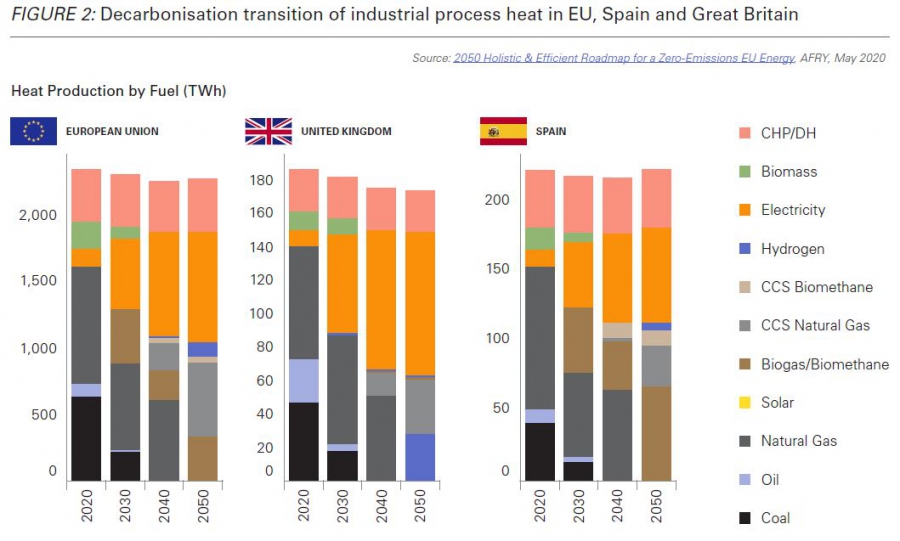 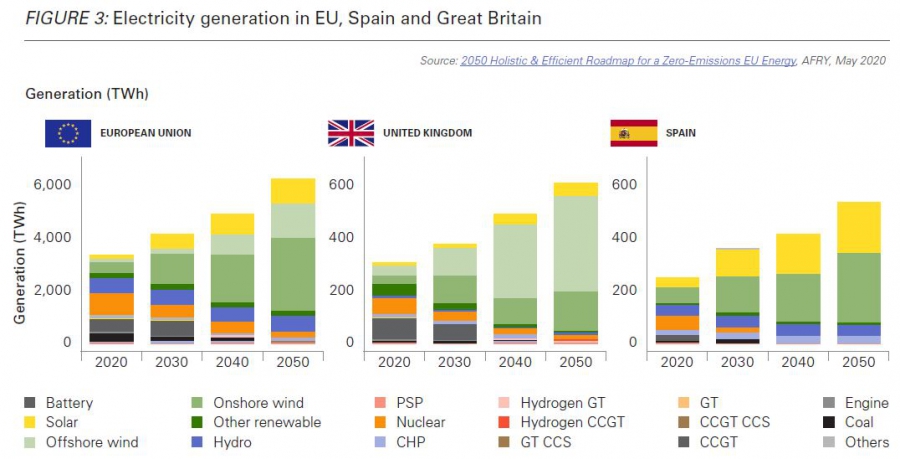 In industrial heating, the report notes a split between higher-temperature and low-temperature heat processes. In the latter there is a significant deployment of air source heat pumps, in the former “there is a large-scale rollout of CCS gas (natural gas and biomethane)”, in other words the use of natural gas in combination with carbon capture and storage.

“During the first decades reductions of CO2 are achieved by switching from coal and oil boilers to natural gas and biomethane boilers, completely eliminating coal and oil technologies by 2040. … By 2040, CO2 constraints require for CCS to start being deployed to mitigate emissions where higher temperature heat requires zero-carbon gas boilers to be used. By 2050, this technology together with biomethane supplies a total of 41% of heat demand in Europe.” (Figure 2)

Total generation in the EU is expected to increase 82% between 2020 and 2050, with 80% of generation provided by solar and wind in 2050. CCGTs (combined cycle gas turbines) fill part of the gap left by the disappearance of coal with an increased share in 2030, “before fading away rapidly”. By 2050, “the remainder generation is provided by nuclear, hydro and some hydrogen CCGTs and gas turbines.”

In other words, there will be a window of opportunity for natural gas in the power sector in the years ahead, but it will be short-lived.

The report contains a special section on hydrogen. 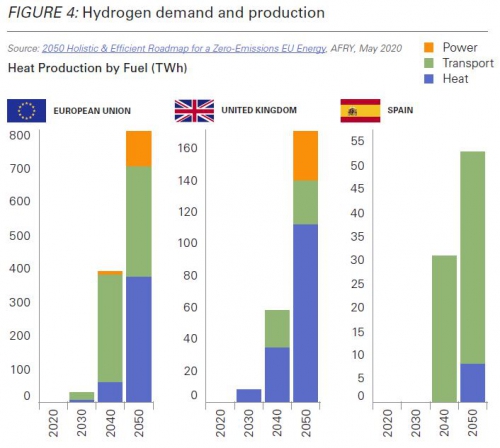 It notes that “by 2030, production of hydrogen is still low as it is not required neither for heat nor for transport. However, demand increases rapidly over time, reaching circa 400 TWh in 2040 and c. 800 TWh in 2050.”

You will probably ask how much of this hydrogen will be “blue” (based on natural gas, with CCS) and how much “green” (based on electrolysis). In the version of the report published on the website of AFRY it does not mention this. However, in an earlier version which we looked at, the report said that until 2030 hydrogen “is mostly produced through steam methane reforming (SMR)/autothermal reforming (ATR) with CCS (25.5 TWh across Europe).”

However, after 2030, “the decrease of the cost of the electrolysis allows for this technology to grow quickly, resulting in 80% of total hydrogen production by 2050 in Europe.” In other words, some 20% would be left for “blue” hydrogen. For some reason, this information was removed from the report.

How the scenario translates into primary fuel consumption is shown in this figure:

Note that oil and coal are gone completely from this picture. 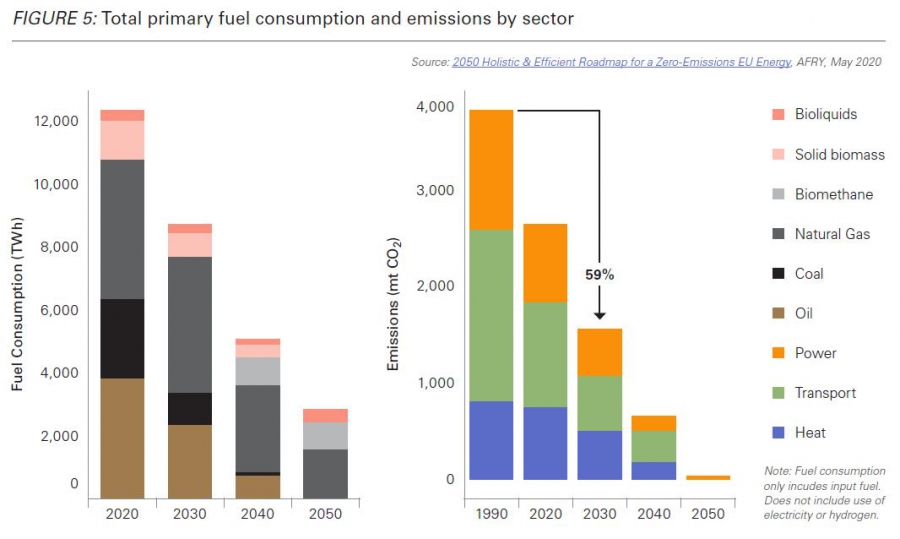 Natural gas is still good for over 1,000 TWh. This is approximately 100 bcm, roughly one-fifth of current European consumption. If this becomes reality, it implies that the European gas sector will shrink to the size of Japan’s.