Presentations delivered by representatives of the European Commission this autumn have had naturally similar messages, where the future of gas is concerned:

The new European Green Deal will set the tone and direction, but there is plenty of detail to be worked out.

The transition from the present European Commission to the new is impacting the energy debate within the EU. Ursula von der Leyen, the new European Commission President designate, has committed to deliver a European Green Deal (Figure 1) 100 days after taking office, giving the climate change debate a new direction.

The Green Deal is the new EC’s first priority. Its main aims are:

The announcement by EIB on 14 November that it will stop funding oil, gas and coal projects after 2021 appears to be the first step in this direction and demonstrates the seriousness of the new EC. Under the new policy, energy projects applying for EIB funding will need to demonstrate their green credentials. The bank has clarified that gas projects will still be possible, but they will have to be based on new technologies such as carbon capture and storage, combined heat and power generation, or integrating renewable gases with natural gas. 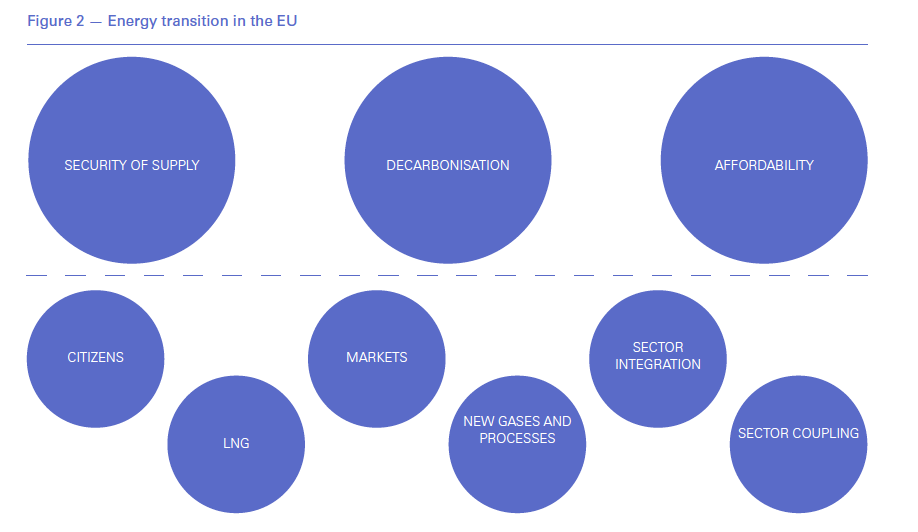 The Green Deal will be the main flagship of the new EC and it is expected to have a tremendous impact on the future of energy, including gas, in Europe. Its four key pillars will be: people; the climate; the environment; and the economy.

The mission letter of Kadri Simson, the energy commissioner designate, is indicative of what is to come. Her role will include:

The energy system will become more complicated. Decarbonisation will drive the change but it will be expensive and yet to be explained is how energy will remain affordable while never losing its security. The EC will have to ensure that that markets and regulations do their job (Figure 2).

Continuity between Energy Union and the Green Deal

There will be continuity between Energy Union and the Green Deal. An appropriate legislative proposal will be made at the beginning of the new EC’s term.

The important parameters are:

Achieving the EU climate and energy policy targets post-2020 means the right regulatory framework must be in place. This includes:

Today natural gas represents 24% of EU’s energy demand. Gas will still be important and will continue to play an important role in future, especially in terms of replacing carbon-intensive fuels: coal and oil. Coal to gas switching is the most urgent to achieve quick gains in terms emissions reduction. 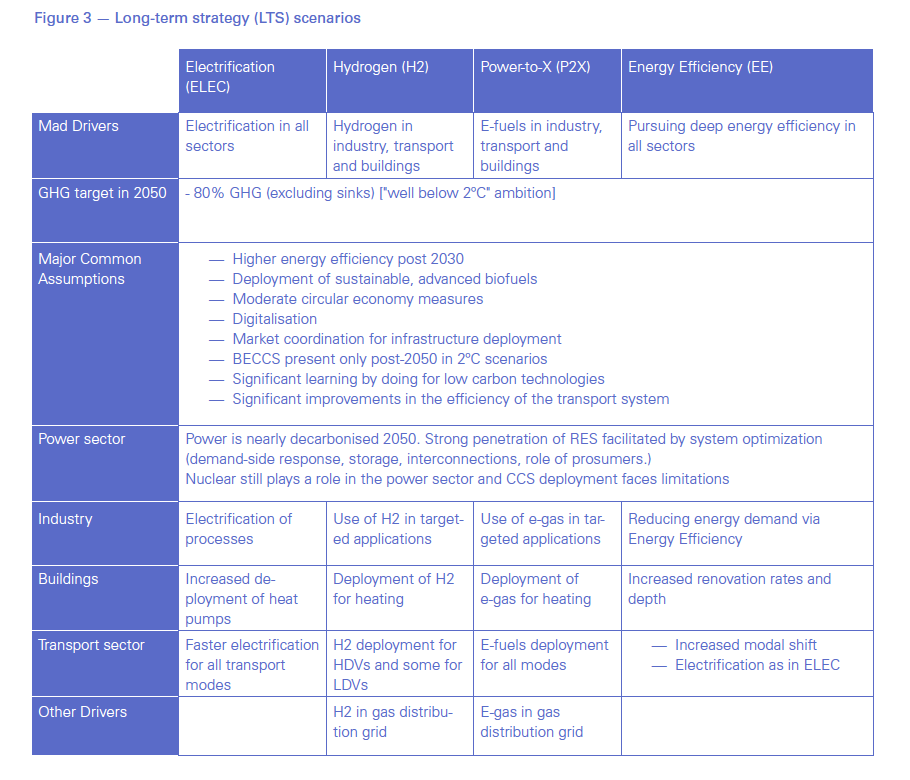 But in the longer term, the gas sector must also decarbonise. The use of unabated fossil fuels in power generation in Europe will all but disappear between 2030 and 2050 although the degree of abatement is questionable as it will depend on the cost.

Green gases such as biogas and hydrogen produced from renewable electricity will have an increasing role to play. Hydrogen can be produced from natural gas using steam methane reforming with CCS, or by using pyrolysis where the by-product is solid carbon. There is also talk of injecting hydrogen into the grid, although its behaviour, when mixed with methane, creates different problems.

So far these measures are only aspirational at a commercial level. In the Netherlands though the Athos project is preparing to set up a carbon trading hub and it has invited expressions of interest from potential buyers and sellers.

EU’s long-term strategy (LTS) for emissions reduction explores eight scenarios (Figure 3) based on different technologies, utilisation and behavior. These include:

Power generation capacity (Figure 4) and primary energy in 2050 (Figure 5) will be largely coming from renewable sources. 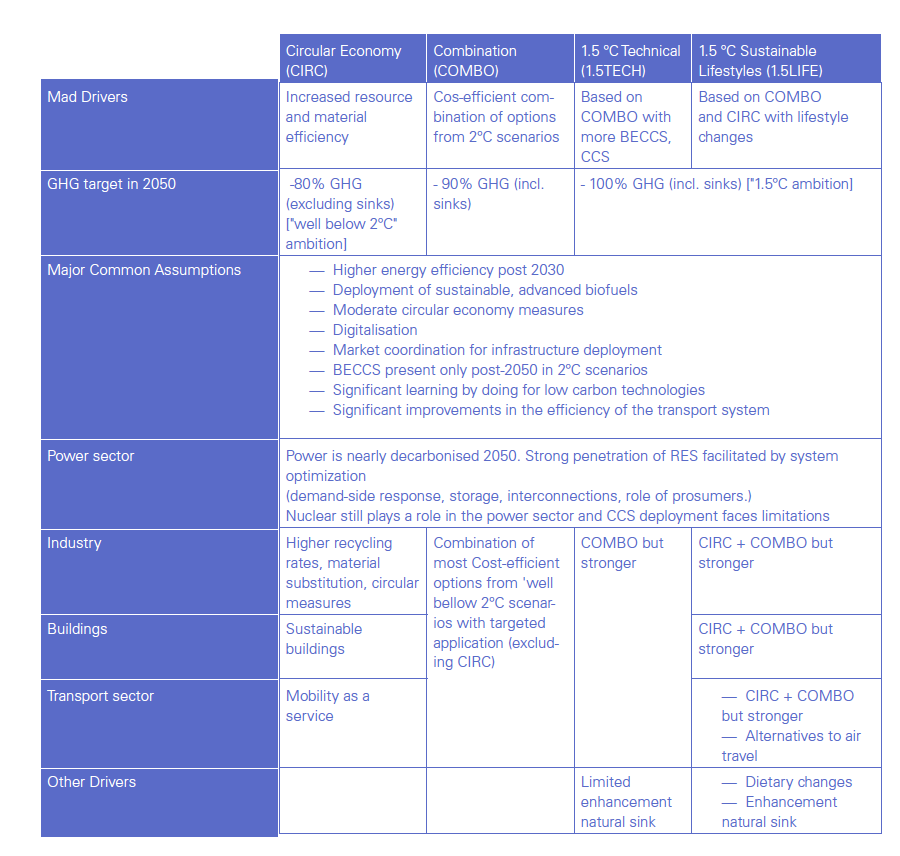 But how exactly transport and heating/cooling will be decarbonised is not yet clear. In 2015 heating and cooling accounted for about half of Europe’s final energy demand. It is recognised that molecules will do the heating/cooling work far more effectively than electrons, the gas grid in the UK for example carrying four times the energy of the power grid, on peak demand days.

The role of storage will also increase by 2050 (Figure 6), with batteries and hydrogen providing the biggest contributions.

But how renewable intermittency will be dealt with is also not yet totally clear.

The EU’s LTS for emission reduction will be based on:

All sectors will have to contribute towards achieving the 1.5degC trajectory to achieve net-zero greenhouse gas GHG emissions by 2050 (Figure 7).

Energy efficiency will be a key contributor.

A long-term role for gas?

Despite uncertainties, scenario studies consistently show a long-term role for gases in the energy system – natural gas, biogas and waste gas, synthetic methane and hydrogen (Figure 8). Even though natural gas still retains a role, based on the EC scenarios its use – and that of LNG -- will start declining from mid-2020s onwards and faster post-2030. Based on the recent EC presentations, the days of using unabated gas as a baseload fuel for heat and power are numbered. 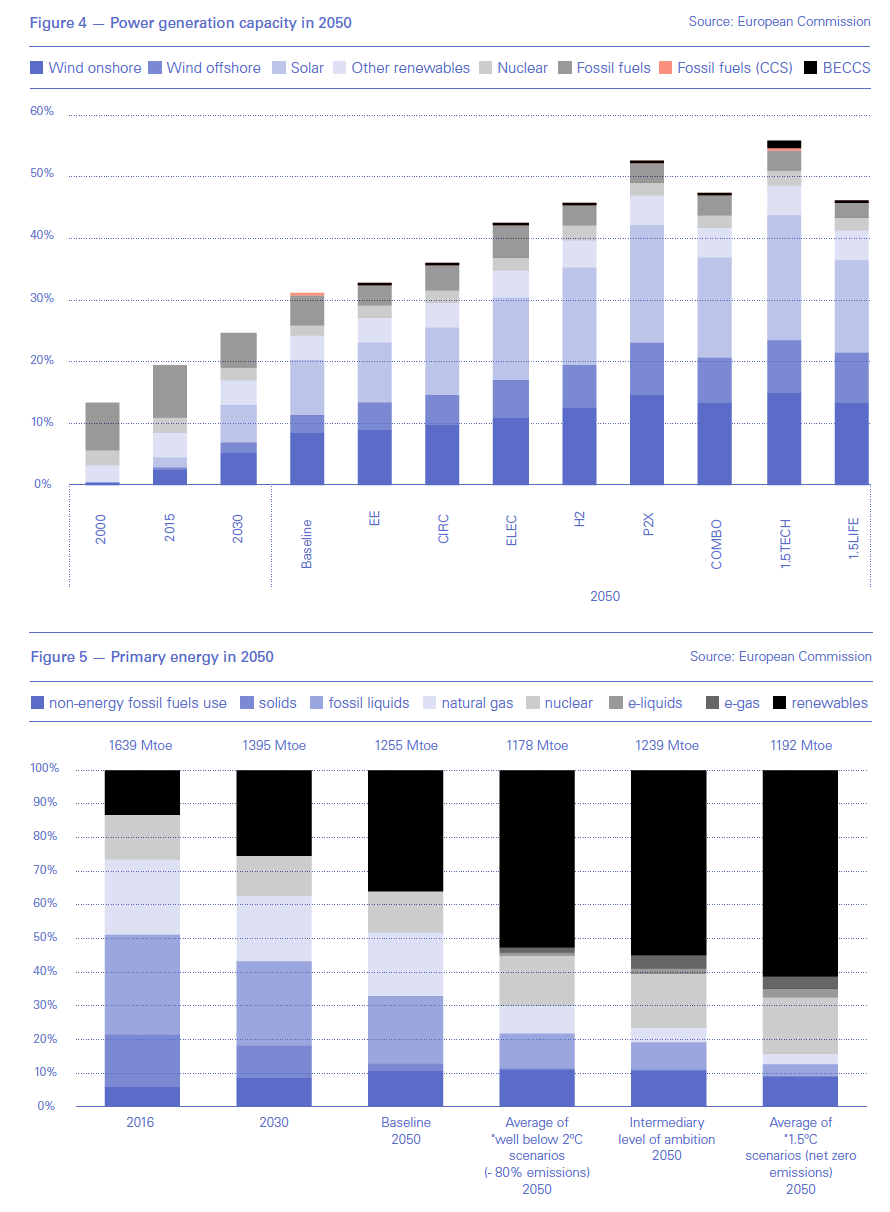 Frans Timmermans, tasked with putting together Europe’s Green Deal, said “My dream is to turn our economies to hydrogen.”

Ursula von der Leyen said as much in her letter to Kadri Simson: “Gas will have a role to play in the transition towards a carbon-neutral economy, notably through carbon capture and storage.”

All scenarios will require massive deployment of new technology and changes to EU’s regulatory framework, as well as massive investment – as much as €200bn/yr during transition. But this implies a more co-operative and environmentally-aware public than the one that is buying SUVs today.

Natural gas credibility depends on reducing methane emissions (Figure 9). It must seriously address this if it wants to be part of the future, especially as it is estimated that 45% of methane emissions can be abated at no cost.

Kadri Simson is committed to an EU methane strategy. She said "There will be an initiative in the field of methane and methane leakage, and Members of the European Parliament will be very closely involved in this strategy."

While electricity demand is expected to increase, with renewable electricity accounting for a high share of the energy mix by 2050, gases help with transport and energy storage needs (Figure 10).

There will be a dual role for gases: partnering with renewables and a means to store energy. 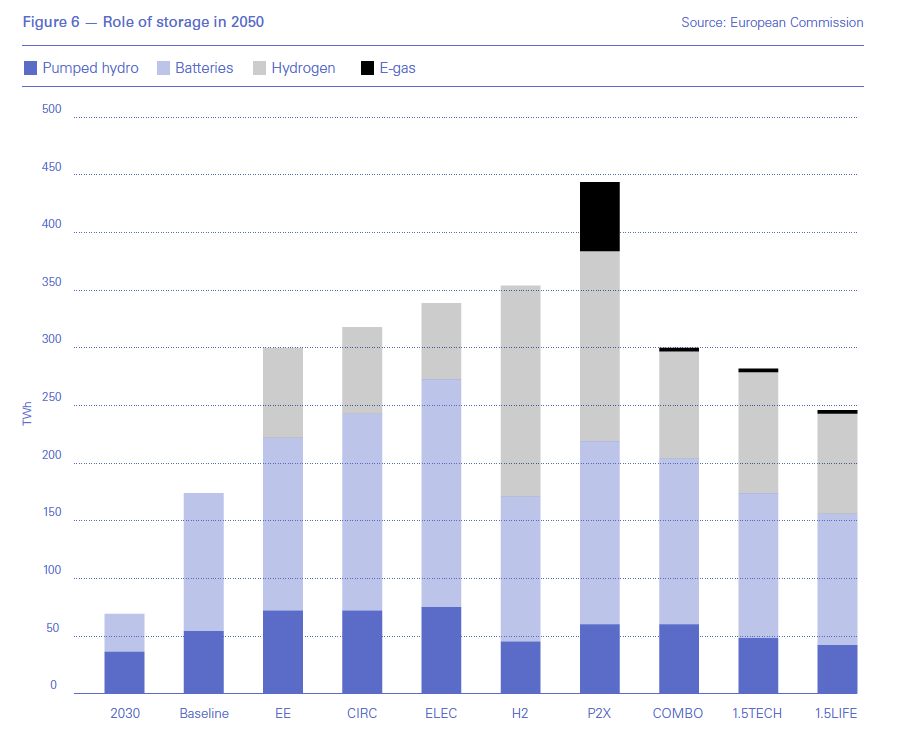 Scenario studies also show increasing interaction between electricity and gas, as well as between different types of gases (Figure 11). The EC is assessing regulatory barriers in linking the gas and electricity sectors.

What will also be needed is smart integration of electricity, heating, cooling, transport and industry through:

But regulatory frameworks will still require co-ordination between consumers, producers, networks and regulators to succeed. Experience shows that it will not be easy to convince consumers to switch to low-carbon energy. One way or another, the gas industry will need to achieve fundamental change before 2030.

Some way to go

Industry is still in the process of testing to what extent new technologies and applications are feasible and the EC is trying to get a handle on the different types of green gases.

The EC is in discussion with industry to ensure smooth and successful transition and a level playing-field – but it does not want to pick winners. Industry should do that, based on market drivers. But the European Investment Bank’s decision to ban lending to fossil fuel projects shows that it is picking winners. 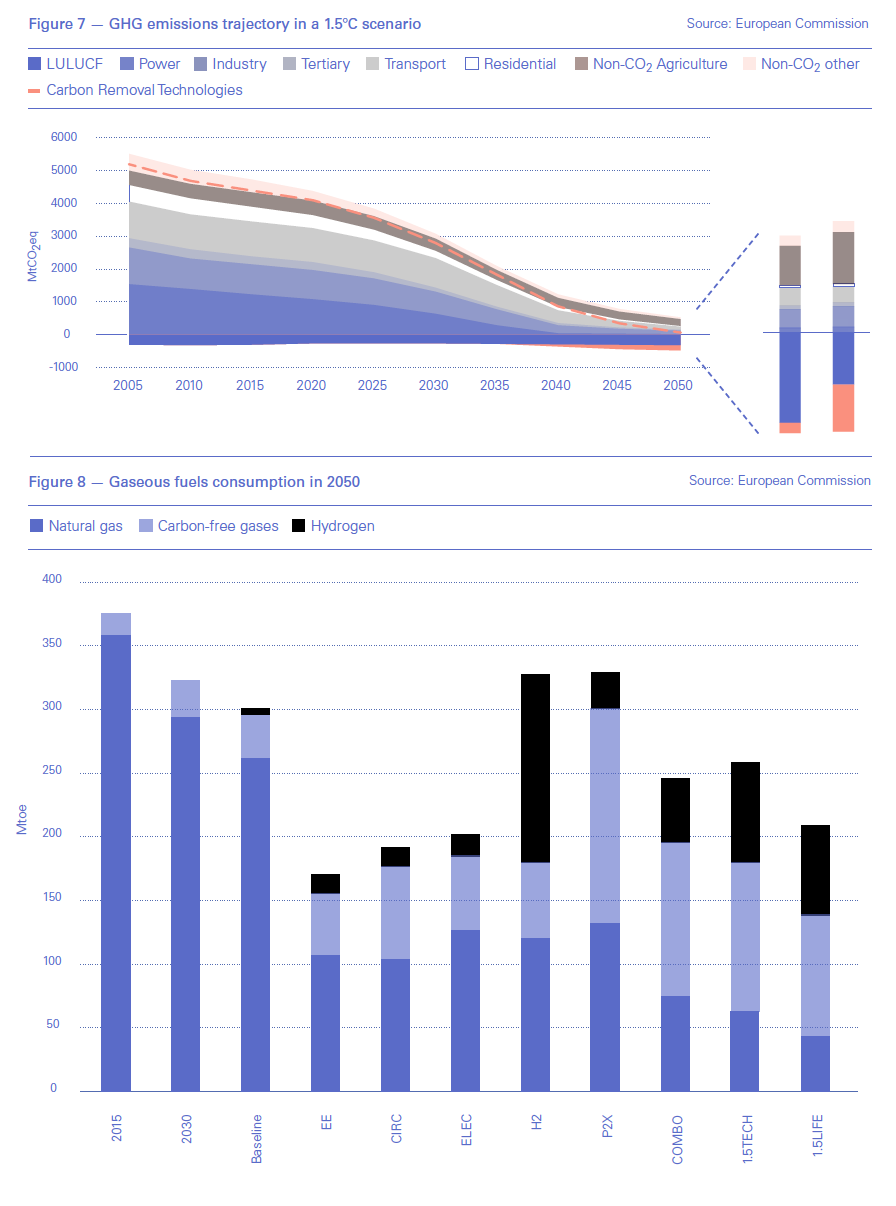 The EC is also working on a new regulatory framework and policies to enable energy transition, in particular allowing for the introduction of renewable natural gas. This includes the introduction of different quality standards for using networks; the use of existing pipelines to transport new forms of gas; the traceability of renewable gas and a regulatory system for hydrogen.

Given that the Green Deal will provide a framework that will shape Europe’s energy industry for years to come, the gas industry needs to make its case well now, as there are many ways to reach the EU’s targets. And the lobby groups representing other, low or zero-carbon forms of energy have been honing their strategies for a long time.

While the European utility lobby group Eurogas welcomed the EIB’s ban, the International Gas Union said it was misguided. The risk is that by making it harder to borrow for gas projects, cheaper, higher carbon projects will get off the ground faster.

Eurogas, some of whose members also have coal-fired power generation assets, said the "new rules will support the deployment of carbon capture and storage (CCS), power-to-gas, hydrogen and biogas. Investments in the gas infrastructure will deliver these technologies that all support the achievement of the 2050 carbon neutrality target. The bank has also identified the need to complete the gas infrastructure with many Projects of Common Interest focusing on natural gas eligible for financing. Importantly the bank will continue to support projects to deploy small gas boilers, which help to improve air quality and reduce greenhouse gas emissions in areas still using solid fuels or oil for heating." 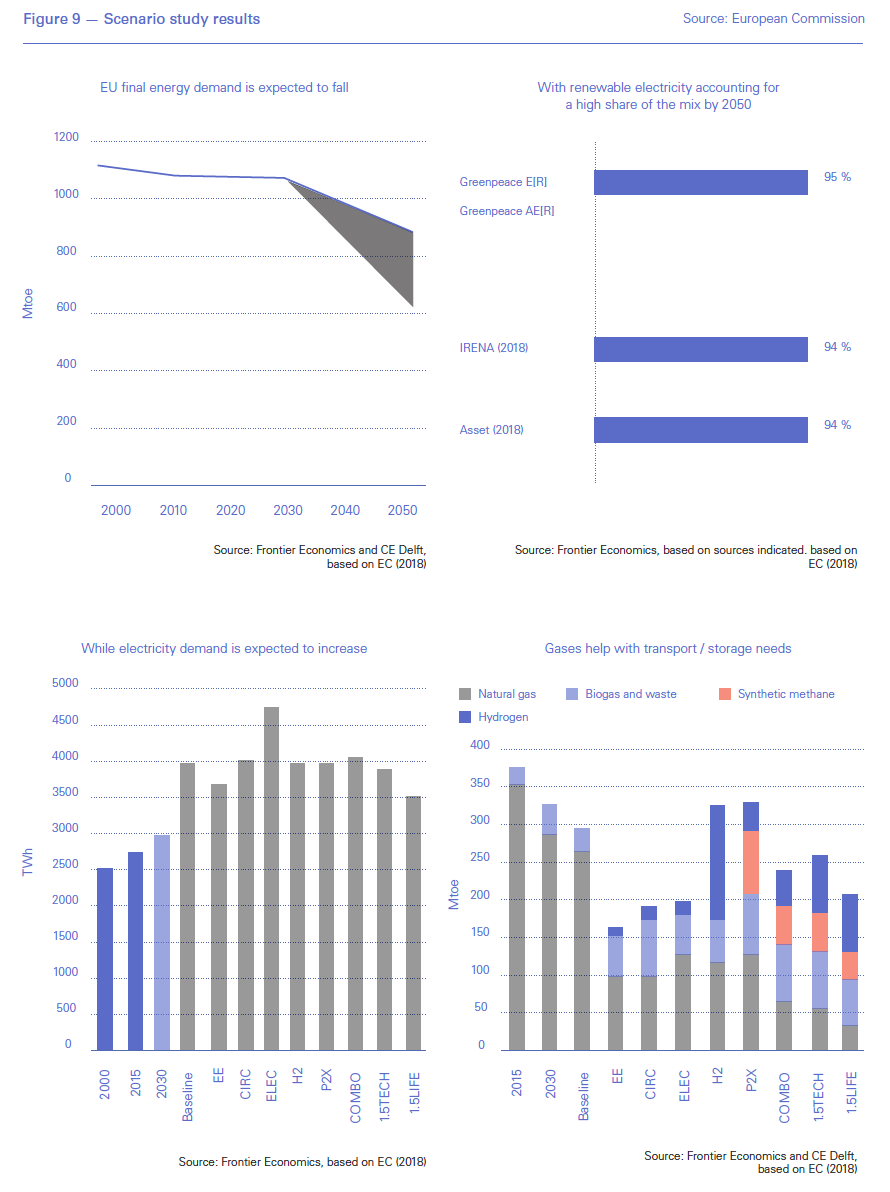 It also repeated its call for EU-wide binding targets for renewable and decarbonised gas, "such as countries like France have done with a 10% target for renewable gas by 2030. This is now a time for action and delivery."

However, the IGU said that, paired with carbon capture and storage technologies and supplemented with renewable gases, gas could be made practically emission-free.

“The EIB decision will have the effect of taking all of this promise off the table for many jurisdictions around the world – where there are millions of people who need more energy to fuel their economies and improve their quality of life,” the organisation said. It said that prudent policy-making should be based on effective performance objectives and guided by desired outcomes, instead of picking technologies and prematurely choosing winners and losers.” 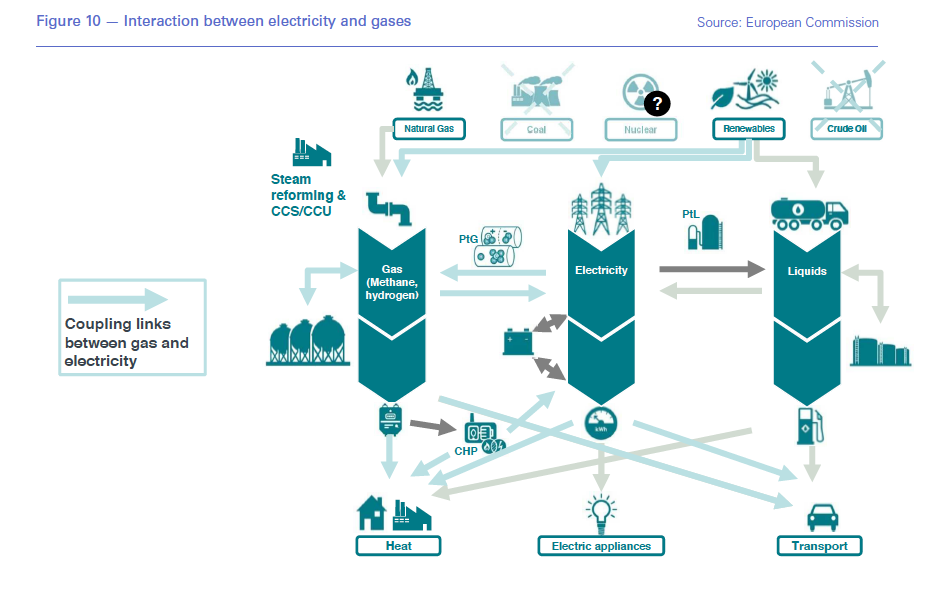 In Defence of Gas [NGW Magazine]