In Defence of Gas [NGW Magazine]

Natural gas is facing a three-pronged attack: LNG-fired power plants are as bad as coal from a global warming perspective; there is no place for gas-fired power plants in the net-zero greenhouse gas (GHG) emissions, post-2050 world; and the cost of new renewables – solar and wind power – and battery storage are dropping so fast that new gas-fired power plants will not remain economic over their natural lifespan. Therefore, utilities investing in them now will be left with massive stranded costs.

On the whole, the eco-activists’ attack on LNG appear overstated and, even where the claims are relatively accurate, the industry has the ability to adopt mitigation measures.

Environmental organisations such as US-based Global Energy Monitor – formerly known as CoalSwarm – argue that full-cycle GHG emissions from power plants running on regasified LNG could be as high – or higher – than those from coal-fired plants. This is primarily because of so-called fugitive emissions of methane during gas production. Methane is a potent, albeit relatively short-lived, GHG that has warming power 32 times greater than carbon dioxide (CO2) when calculated over a century.

The basis of such claims appears to be a 2011 study by Robert Howarth, an ecologist at Cornell University, who concluded that the GHG footprint of gas produced from US shale could be 20% to 50% higher than that of coal. Colleagues at Cornell, who found he had significantly overestimated fugitive methane emissions and venting caused by “blowback” during well completions, subsequently discredited his results.

In a 2014 study, the US National Energy Technology Laboratory (NETL) found full-cycle GHG emissions from gas-fired plants from three sources – US LNG, Russian piped gas, and regional LNG – were 25% to 61% less than domestically-produced coal for Europe on a 100-year basis and 18% to 59% less for Asia. On a 20-year basis, GHG gas emissions from gas could still be up to 57% less than coal, but the high ends for gas were more prone to overlap with the low range for coal in both Europe and Asia given the potency of methane emissions (see Figure 1). 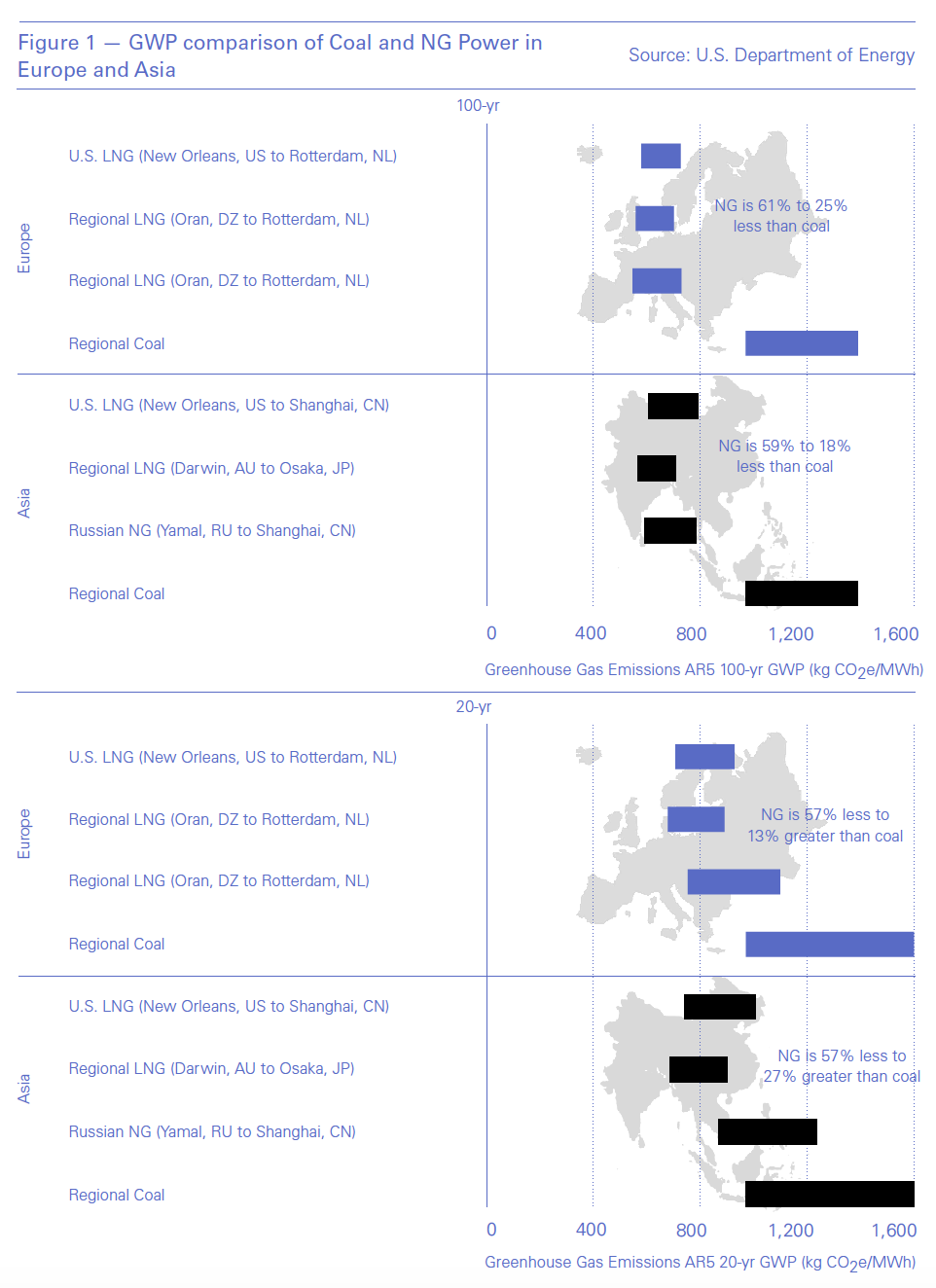 At the same time, there is tremendous potential for reducing methane emissions associated with gas production. The gas industry in the Canadian province of British Columbia (BC), where the majority of the massive Montney formation is situated, by law must follow a method of “green completions” to capture blowback and prevent venting when a well is first fracked and put into production. As a result, the industry’s methane emissions intensity is a mere 0.3%, according to the BC government.

In addition, some companies producing gas from the Montney, such as the Anglo-Dutch major Shell, have installed electric actuator valves, instead of pneumatic valves that release methane every time they are activated. Shell estimates methane emissions from its Groundbirch operations to be a tiny 0.1% of gas production. Although not as extreme, new regulations can force the global gas industry and related players to reduce methane emissions all through the cycle, from production to consumption.

The global environmental movement acknowledges that methane emissions can be reduced, but they cannot be reduced to nothing, and since the world has to get down to net-zero GHG emissions by mid-century given a limit carbon budget, the use of gas must be severely curtailed.

“Gas breaks the carbon budget,” Oil Change International wrote in a recent report. “There is no room for new fossil fuel development – gas included – within the Paris Agreement goals. Even if global coal use were phased out overnight, developed reserves of oil and gas would push the world above 1.5 °C of warming.”

The Intergovernmental Panel on Climate Change (IPCC) has warned that, in order to limit warming to 1.5 °C above pre-industrial levels to avoid cataclysmic climate change, global gas consumption must decline 15% by 2030 and 43% by 2050, relative to assumed 2020 levels.

In addition, the IPCC estimates that methane emissions need to be reduced by 35% between 2010 and 2050 to meet the Paris treaty goals. Humans account for as much as 60% of global methane emissions, with nearly half of that related to the fossil fuel industry.

This may be the most disingenuous argument against gas by the global environmental movement, as it assumes no methods of carbon mitigation. Carbon capture and storage (CCS) may be better suited for coal-fired power plants than gas-fired ones as argued in CCS Could Hinder Global Gas Consumption, given substantially higher GHG emissions for the former than the latter, but CCS could increasingly become an option for both.

The article concluded: “[D]evelopment of CCS … may currently be stuck in the pre-commercial stage, but it has a great deal of potential, with governments such as the US and a China increasingly serious about encouraging large-scale projects.”

At the same time, the potential of industrial-scale “carbon scrubbers” to remove CO2 from the atmosphere is rapidly rising, especially as an increasing number of jurisdictions put a significant price on carbon, while tree planting is a low-tech and cost-effective method of cutting GHG emissions.

Organisations associated with the global environmental movement are predicting massive stranded investments for LNG and gas-fired power plants in coming years. For example, Global Energy Monitor is predicting more than $1 trillion of currently planned LNG projects to become uneconomic – unable to meet even operating costs – within their rated lifespans, of $1.3 trillion in total.

“These are 40-year investments from an industry standpoint,” said Ted Nace, executive director of Global Energy Monitor. “Natural gas infrastructure may be competitive in three, four or five years but do people expect it to be competitive with renewables in 15 years?”

At the same time, researchers from the Colorado-based Rocky Mountain Institute (RMI) are forecasting new renewables plus storage to be cheaper than operating costs for gas-fired power plants in the US by 2035, despite the country having some of the lowest gas prices in the world (see Figure 2). 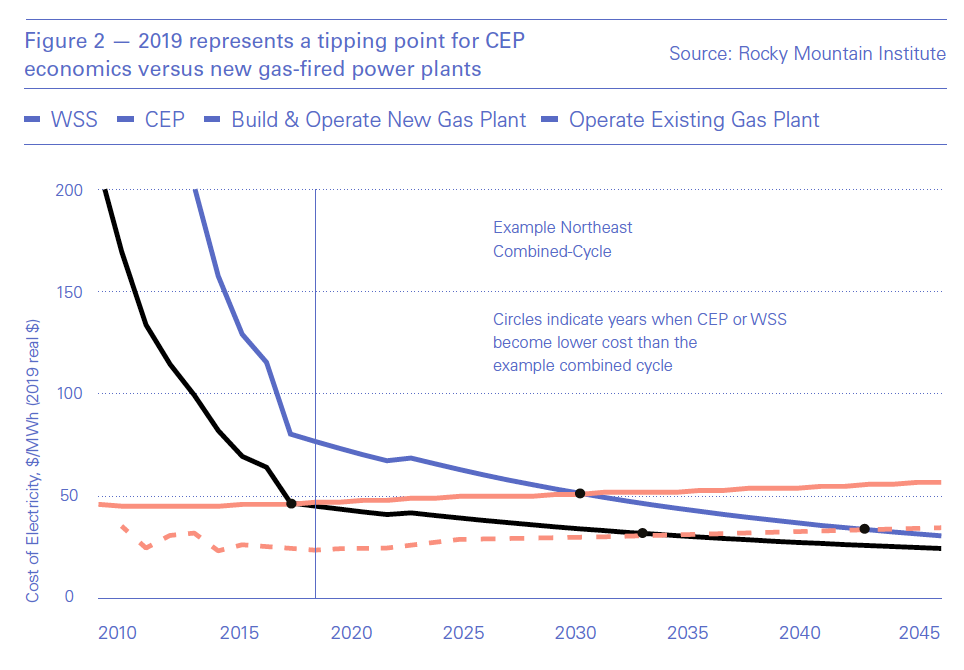 “The new-build costs of clean energy portfolios are falling quickly, and likely to beat just the operating costs of efficient gas-fired power plants within the next two decades,” the RMI researchers wrote.

That would leave a lot of stranded gas assets in the US by the mid-2030s, and possibly earlier in countries with higher gas prices, saddling utilities and their investors with not only the cost of those assets but the cost of premature decommissioning of gas-fired plants and associated infrastructure as well.

However, what the global environmental movement chooses to ignore in their analysis is that present battery storage technology works best in a limited role, as a substitute for so-called peaking power plants – smaller plants, often fuelled by gas, that can fire up quickly when prices and demand are high, and hence can afford to operate infrequently.

A 2016 study by researchers at MIT and Argonne National Lab found steeply diminishing returns as increasing amounts of battery storage are added to a grid. Lithium-ion technology is ill suited for longer seasonal gaps in new renewables production, which is a particularly acute problem in places such as California, where wind and solar power drops off precipitously in the fall and winter months.

Building sufficient renewable generation and storage capacity to reach 50% penetration would push power prices to an acceptable $49/MWh, but rising exponentially to $1,613/MWh at 100% penetration – a level the California legislature is considering adopting by 2045 – and that is assuming the cost of lithium-ion batteries decline by roughly two thirds (see Figure 3). 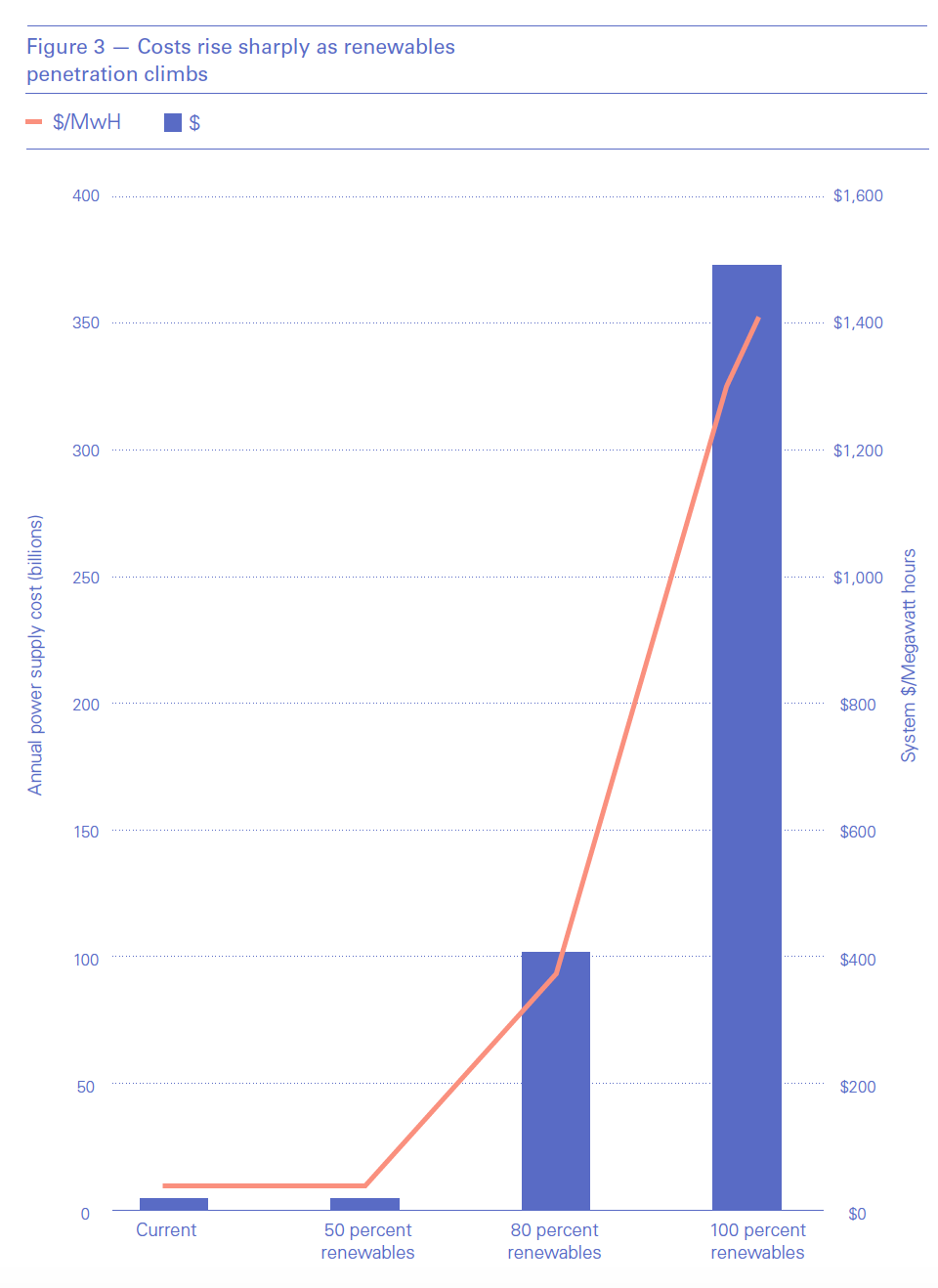 “The system becomes completely dominated by the cost of storage,” says Steve Brick, a senior advisor for the Clean Air Task Force. “You build this enormous storage machine that you fill up by midyear and then just dissipate it. It’s a massive capital investment that gets utilised very little.”

In a 2018 study published in Energy & Environmental Science, the authors found that it would cost more than $2.5 trillion for a battery storage system of the size needed to support 80% wind and solar penetration of the US power system.

To conclude, it is true that there is no guarantee of continuing success for gas: environmental crusaders simply need to win the public relations war and politicians can tell which way the wind is blowing.

But the riots over higher diesel prices in France last year, the rise in sales of sports utility vehicles in Europe and other counter-intuitive events show the extent of the problem facing policy-makers. People do not like to be told to live within their environmental means or to have their interests ignored by the relatively well-to-do.

From this perspective, the balance of evidence would appear to suggest the future of the global gas industry remains relatively bright. This is especially the case if governments and companies leave more money on the table and become significantly more vigilant about reducing fugitive methane emissions.

Foreign Traders Account for 25% of Gas Stored in Ukraine

UK to Trial Hydrogen Use in Heating