In the space of just six years, the US LNG industry has become the largest in the world, overtaking both Qatar and Australia. Not only that, but the country has substantial new capacity under construction and an even larger pipeline of earlier-stage projects, which suggests the expansion can continue over the next decade.

This is good news for Europe, where LNG demand has surged in the face of lost Russian gas pipeline imports. European LNG demand will grow further as a range of countries bring online Floating Storage and Regasification Units (FSRU).

The Netherlands already has the Eemshaven Energy Hub up and running and now only bad weather appears to be holding up Germany’s installation of the 4.5 bn m3/year Lubmin FSRU. This will be the first of six planned deployments that will bring the super-cooled fuel directly to Europe’ largest economy for the first time. 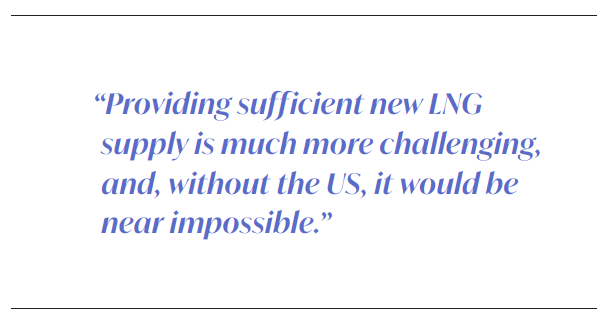 This new capacity is dependent on increased global liquefaction capacity to maintain import levels at affordable prices. However, providing sufficient new supply is much more challenging, and, without the US, it would be near impossible.

The US has near perfect conditions for the expansion of LNG exports. On the supply side, the country has abundant supplies of domestically-produced gas, mature, sophisticated financial markets and expansive pipeline infrastructure, which means LNG export capacity does not have to depend on dedicated upstream developments. Moreover, the US has still to exhaust its supply of old regasification facilities, which provide the cheapest and simplest locations for development, owing to the ability to take advantage of existing infrastructure on brownfield sites.

In addition, the US has pioneered the development of small-to-mid scale modular LNG plant development, which, in the current market context, has the significant advantage of early phased production and revenue streams. US developers’ willingness to explore different pricing mechanisms has also helped buyers reduce their exposure to oil prices, tying LNG exports to the Henry Hub benchmark, the world’s most liquid gas trading hub.

Three projects currently under construction promise a combined 5.7bn ft3/d of new LNG at peak export capacity by 2025. This is the equivalent of adding the 2021 LNG production of Malaysia, Indonesia and Papua New Guinea to the market in just three years.

Golden Pass LNG is expected to be the first onstream. It is a three-train development of standard-sized modules, with peak capacity of 18mn mt/yr and nominal capacity of 15.6mn mt/yr, located near the Sabine Pass LNG plant in the Port Arthur area. Golden Pass will use the Sabine-Neches waterway, one of the few deep water areas on the Gulf Coast suitable for large LNG carriers (LNGCs). Built on the site of a former regasification facility, it benefits from five existing 155,000 m3 LNG storage tanks and two existing marine berths.

LNG from the plant will be marketed 30% by ExxonMobil and 70% by QatarEnergy, the two project developers, via a joint-venture company Ocean LNG. The first train is expected to come onstream in late 2023, followed by the two remaining trains in 2024.

Next online should be Plaquemines LNG, also located on the Gulf Coast. Plaquemines saw a final investment decision (FID) made in May this year by developer Venture Global, following 80% of the plant’s final export volumes of 20mn mt/yr becoming subject to sales and purchase agreements (SPAs), but construction and other work was underway prior to the FID.

Exports have been booked by Poland’s PGNiG, China’s Sinopec and CNOOC, Anglo-Dutch major Shell and France’s EDF for the first phase. Customers for Phase 2 include ExxonMobil, Malaysia’s Petronas and US company New Fortress Energy (NFE).

Plaquemines is a very different creature to Golden Pass as it will consist of 24 electrically-driven 0.5mn mt/yr capacity modules configured in blocks. Each block will have two trains each equipped with a cold box, a heavy hydrocarbon removal section and compressor. The plant will have six pre-treatment trains and three loading berths for LNG tankers of up to 185,000 m3. Baseload capacity will be 12mn mt/yr and peak capacity 13.3mn mt in the first phase. Start-up is anticipated in 2024.

Also receiving financial sanction this year is Corpus Christi Stage 3, which will be developed on the site of the existing Corpus Christi LNG plant by owner and US LNG pioneer Cheniere. Stage 3 will add approximately 10mn mt/yr of capacity via seven mid-scale trains with start-up planned for 2025. There are plans to add a further two mid-scale trains in an additional development phase.

Beyond this, there are a raft of new projects, including new developments and expansions, that are engaged in or have completed front-end engineering and design (FEED) studies, totalling 142.8mn mt/yr of capacity. If all are built, this would almost double US peak capacity in 2025, which is expected to reach 148.5mn mt/yr.

The proposed 13.5m mt/yr Port Arthur project, which is being developed by US company Sempra, is the latest of the new wave of investments to land key SPAs boosting its chances of an early FID. In November, US major Chevron committed to offtake of 5mn mt/yr and acquired 30% equity in the first phase of the project.

This was followed in early December by two deals, the first for Engie to take 0.875mn mt/yr for 15 years on a free-on-board basis from Port Arthur phase one and the second with the UK’s Ineos for 1.4mn mt/yr from the project for 20 years also on an FOB basis. 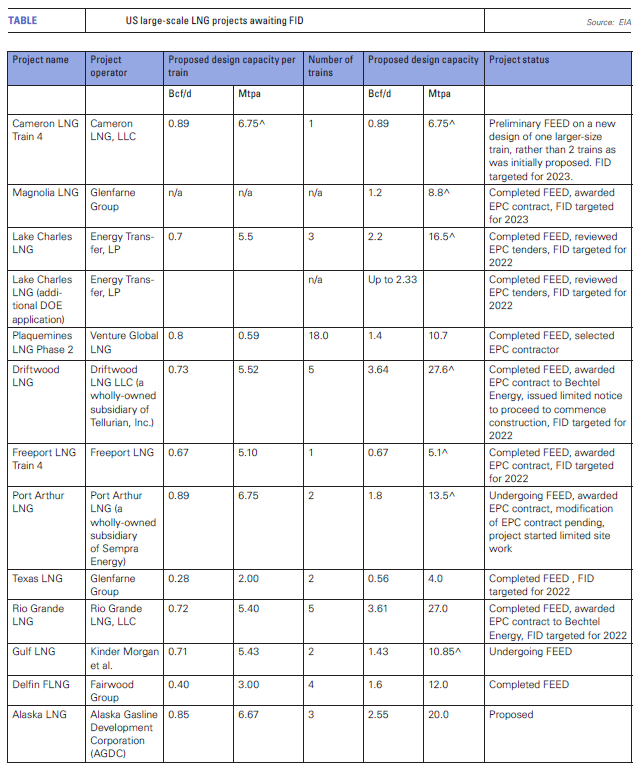 With these SPAs in the bag, Port Arthur is looking good for a planned FID in the first quarter of 2023, which could see the first volumes exported in 2027.

Gas supply – is there enough?

All this begs the question as to whether the US can produce enough gas to feed not just the raft of new LNG projects planned on home soil, but also those based in Mexico, which will take US gas as feedstock, alongside growing gas demand across all sectors of the US economy.

The latter has already taken an FID on its Energia Costa Azul project with 3.3mn mt/yr planned in the initial phase. NFE’s Altimera plant would add 4.2mn mt/yr and LNG Alliance of Singapore’s Amigo LNG 3.6mn mt/yr. This all adds up to an additional call on southern US gas production to supply feedstock for more than 30mn mt/yr of non-US LNG capacity.

The growth of exports has become an increasingly important component of the US natural gas balance. From a position as a net importer in 2010, by 2021, net US exports of natural gas were the equivalent of more than 10% of marketed production. Within this, LNG exports, by 2020, only four years after they began, had overtaken gas exports to Mexico, despite the latter’s strong growth.

It is not as if the US is using less natural gas itself. Despite the dip caused by the COVID-19 pandemic in 2020, consumption is on an upward trend with demand rising across all sectors to such an extent that the US Energy Information Administration predicts this year will see a new record.

Gas use for power generation, the largest end use for natural gas in the US, will rise most strongly, by 4% this year, the EIA forecasts. The increase in domestic demand is perhaps surprising, given much natural gas prices this year. Although nowhere near European or international spot LNG levels, US domestic natural gas prices have more than trebled since 2020.

The increase is partly structural, particularly in the power sector, where coal plant retirements have been replaced with a mix of new natural gas plants, plant conversions and renewables. In the industrial sector, years of low gas prices prompted investment in new plants based on gas for energy and as feedstock for non-energy purposes.

These changes embed gas use in the medium term, although this year’s high gas use amid high prices reflected in part a lack of coal supply, and renewables now dominate new power generation capacity installations. Similarly, solar power and electrification are likely to take a greater share of new growth in residential and commercial energy demand.

However, US gas exports are rising faster than domestic gas production. In 2020, net exports jumped by 817bn ft3, while marketed production fell by 244bn ft3. Last year was more balanced, but almost all of the increase in production was consumed by exports. In percentage terms, exports rose by 43% and 41% respectively in 2020 and 2021, compared with -0.7% and 3.1% for marketed production.

High domestic gas prices and energy transition developments may well limit domestic gas demand in 2023. The EIA expects US gas consumption to fall from 88.42b ft3/d to 85bn ft3/d next year. Gas prices are forecast to moderate, after rising in the first quarter of next year, as domestic gas production rises.

However, the EIA expects US LNG exports to rise from 10.6bn ft3/d this year to 12.3bn ft3 next year, an increase of 1.7bn ft3/d, largely reflecting the return to operation of Freeport LNG and completion of new capacity at Calcasieu Pass. As production is expected to increase by an upwardly revised 2.3bn ft3, the increase in LNG exports and a forecast rise of 0.4bn ft3 in exports to Mexico will again account for almost all of the new production. This is before any of the three new LNG export projects in the US come onstream.

So far, Mexican demand for imported US gas has been driven by a combination of falling domestic production, which has dropped each year since 2013, and rising demand, which has increased by 13.3% over the same period. US pipeline imports have allowed Mexico to almost eradicate its own LNG imports, so the rate of demand growth may now be expected to slow.

However, it will accelerate again, if Mexico’s own LNG export plans are realised. In a scenario of high project completion this could add almost 4bn ft3/d of new demand, in addition to likely increases in Mexico’s own domestic demand amid faltering domestic gas production.

The growing role of exports in the US gas balance implies that the US has entered a ‘new normal’, one in which domestic gas prices are more influenced by export demand than previously. Moreover, the US domestic oil and gas industry already appears to have undergone a change in perspective, adopting capital discipline and eschewing the pursuit of value on the back of rapid production expansion.

Which approach will prove most rewarding over the next 15 years? For the moment it appears, LNG expansion both in the US and Mexico will underpin gas industry growth, energy transition impacts notwithstanding.