The LNG market has been a tumultuous one in 2022 and LNG shipping rates have also seen high volatility along with it.

Prime among the factors influencing the market has been Russia's invasion of Ukraine earlier this year and the ensuing actions and repercussions on the global energy markets.

In one fell stroke, some 40% of natural gas supply that went to the EU and the UK needed to be re-sourced as geopolitical factors and actual physical supply disruptions cut off access to much of Russia's gas exports.

According to Rystad Energy, Europe's pipeline gas imports from Russia have dropped by more than 70% since the beginning of 2022 due to factors such as Western sanctions and the recent ruptures on the Nord Stream gas pipeline.

All these flows have naturally been shifted to seaborne transportation, where the volume as well as the sudden shock of established networks being disrupted has caused upheaval in the markets.

With LNG imports into Europe rising nearly 70% year/year in the first nine months of the year, ship valuation website VesselsValue's figures show that while 21% of European LNG seaborne imports came from Russia in March 2021, by October 2022, this had dropped to 11%. 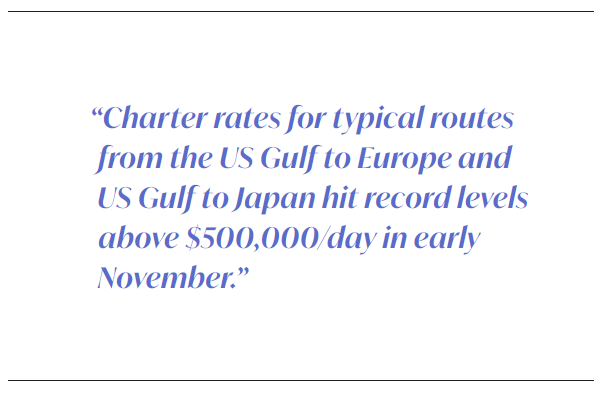 This model has suddenly been upturned and has resulted in a variety of issues at the current facilities. Some of these have a direct bearing on the LNG carrier market.

The sudden rush to replace Russian supplies saw European buyers look to non-traditional sources such as the US Gulf. Ironically, while this has actually reduced ton-miles, the usual metric that determines the incomes of vessel owners, the rush of LNG carriers converging on European import terminals has created congestion and led to higher rates as vessels get held up.

This trade is set to grow, with the US reportedly working with EU countries to ship an additional 50bn m3 by 2030.

The shunting of volumes from Asia has also meant that buyers going after spot volumes have had to not only pay higher prices but also accept higher freight rates to ensure carriage for their cargoes, adding to price pressure in the region.

When this is combined with the vagaries of the gas market such as the effect of weather on demand and the emergence of contango market structures, the resultant effect on the LNG carrier market has been dramatic.

Europe's frantic stockpiling ahead of winter led to higher LNG prices and booked out LNG carriers at high spot charter rates and reportedly over 30 vessels either at anchor or being used for floating storage at the continent's ports in October.

However, just as in years past, the LNG market can turn very quickly as well and the wildly bullish forecasts from some of the more ebullient ship brokers of LNG carrier daily rates reaching $1m/d have evaporated as quickly as the boil-off on a hot day as weather and economics have conspired to put a damper on the current LNG market.

BIMCO's latest weekly gas report says that "although rates are still high, they aren’t remaining at the levels first suspected going into the winter markets.”

Consultancy Maritime Strategies International noted that some of the floating storage offshore European ports likely linked to contango trades is being unwound, with vessel tracking data showing that the number of vessels has come down to 14 as of end-November.

A mild start to the winter in Asia and slumping economic activity linked to COVID flare-ups in China have led to lower than expected consumption and reports of full gas storage tanks throughout much of the region.

This has led to reports of deferred deliveries while a delay in resumption of operations at the US' Freeport LNG export facility has also freed up vessels.

"With Freeport confirming the uncertainty from last week, a slight influx of tonnage has opened up the ability for spot fixing - albeit with caveats on timing and delivery," said BIMCO.

However, a myopic focus on the spot markets and its rapid movements risks detracting from the bigger picture of the overall market, where over two-thirds, and most Asian, imports of LNG are sold on long-term contracts.

Evolving scenarios here include what will happen when long-term contracts such as Japan's expire while Europe is in the process of looking for alternative sources to Russian supply.

The bigger players are already placing their bets. In line with its massive North Field Expansion project, QatarEnergy in 2020 signed slot reservation deals with the three major South Korean shipbuilders – Korea Shipbuilding & Offshore Engineering, Daewoo Shipbuilding & Marine Engineering and Samsung Heavy Industries – for over 100 LNG carriers as well as another 16 with the only LNG carrier-capable Chinese yard Hudong-Zhonghua Shipbuilding.

Some of these are starting to be converted into actual orders. Clarksons Research figures from earlier this year showed a record 108 LNG carriers newbuildings ordered in the first half of this year. This figure is a rapidly moving target with new contracts being announced by the South Korean yards almost weekly in the past few months.

The contract values have also been rising, with benchmark pricing hovering around the quarter billion dollar mark per typical 174,000-m3 LNG carrier as at early November.

With most of these tied to long-term contracts with big name charterers the imputed rates can be calculated and they can be safely locked away out of the market as per traditional LNG shipping market practice.

The potentially billion-dollar question for the future is how many owners have ordered vessels without long-term contracts and for those with relatively shorter contracts, how many will get caught out if markets turn at the same time.

For example, while QatarEnergy's 4m tonnes per annum 27-year contract with China Petroleum & Chemical Corporation is an industry record and Chinese shipping companies are already making necessary transport arrangements, other contracts may not be as stable.

In addition, there is always the threat of defaults if circumstances change significantly. Chinese energy companies, among other commodity companies have notably been known to declare force majeure or a range of other tactics to renege on contracts in the past.

As the saying goes, who's swimming naked will be revealed when the tide goes out. For the sake of the LNG shipping market and the ship finance banks that back them, let's hope this is restricted to just a few high risk-taking daredevils.

Back to E&P spending growth [Gas in Transition]