Israel announces plans for bid round [Gas In Transition]

Despite promises its energy future would lie in renewables, Israel has announced plans to hold a fourth offshore bidding round (OBR). The move comes as the EU courts gas producers around the world amid a dash for supplies to replace Russian energy imports, and the timely progress of talks between Israel and Egypt to export gas to the bloc.

Israel’s energy ministry has not yet given a timeline for the auction but did say pre-qualified companies could take part in bidding on zones or groups of blocks. These will each cover an area of up to 1,600 km2 and comprise “approximately” four concessions.

The ministry said “around” 25 blocks have been mapped but they are yet to be delineated and grouped. A map supplied by the energy ministry denotes 27 concessions across southern, central, western and north-western sections of the Israeli exclusive economic zone (EEZ) as “planned bid round areas”. None of the blocks are within 7 km of the coastline.

The new round comes just six months after the ministry announced a ban on new licensing for oil and halted plans for a new gas bid round. In a research note, Welligence Energy Analytics said: “The purpose of the ban was to encourage renewable energy development, but Europe’s urgent need to diversify its sources of gas has led to the policy reversal.”

Making the announcement, minister of national infrastructures, energy and water resources Karine Elharrar who entered office saying she would focus on the development of renewable energy, said: “Alongside the necessity of moving forward on renewable energy in Israel, after it has been neglected for many years, the Russia-Ukraine war has illustrated in recent months the dangers and risks of energy availability and prices, during the transition period from fossil fuel use.”

The ministry’s outline largely accords with the plans shelved last year in favour of renewables. Given current market dynamics though, it is unsurprising that Tel Aviv is jumping back onto a bandwagon it has been part of for over a decade.

Elharrar added: “On the one hand, there is the problematic reliance of Europe on oil and gas supply from Russia. On the other hand, there is the inability to supply the needs of energy economies relying exclusively on renewable energy based on existing technologies.”

Israel will hope that OBR 4 replicates the success it achieved in its first two licensing rounds which were held in 2017 and 2019 and saw 18 exploration licences awarded to various international players. However, no winner was ever announced for Block 72 in the north-east, which was put out to tender during a failed 2020 auction. Lack of appetite for the acreage is perhaps explained by the long-running dispute over a large maritime area between Israel and Lebanon with the latter laying claim to an area covering the whole block.

That controversy was further stoked with the recent arrival of the Energean Power FPSO which will be used to develop the Karish gas field, which Lebanon has said lies within its territorial waters. The unit is being hooked up to enable production from the field to begin in Q3.

This will provide a significant boost to Israeli gas output, and this timing provides further rationale for Elharrar’s change of heart. “Alongside sincere and genuine concern at what is happening in Europe, the global energy crisis represents an enormous opportunity for the state of Israel to export natural gas,” she said.

As news of the licensing round broke, as did reports of progress towards a deal between Israel and Egypt for collaboration on exports to the EU. Following lengthy talks between Elharrar, EU energy commissioner Kadri Simson and Egyptian officials, the MoE said it had formed a working group to agree terms on a tripartite arrangement that would leverage more than 12mn metric tons/year of existing liquefaction capacity in Egypt.

Ministry officials were quoted by S&P Global Platts as saying that “the political framework agreement will allow the gas companies to subsequently sign commercial agreements between them”.

The potential deal would leverage the existing 10bn m3/year Arab Gas pipeline, the 7bn m3/yr East Med Gas (EMG) pipeline and another “optional” conduit that crosses the border at Nitzana, as well as Egypt’s Idku and Damietta LNG plants, which have capacities of 7.2mn mt/yr and 5mn mt/yr,, respectively. 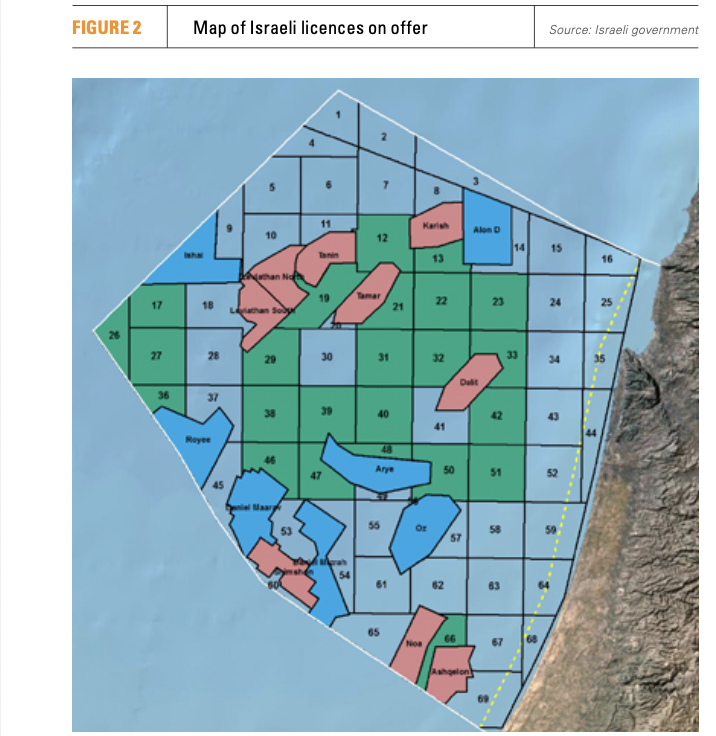 The planned route drew protest from Turkey, but the pipeline received political support from the US until Washington pulled its backing in January, saying the line was not an economic alternative to Russian supplies and suggesting that the EuroAsia electricity interconnector was a better option. This position has clearly changed in the wake of conflict in Ukraine, with US Secretary of State Antony Blinken taking part in talks in May to revive the project. For its part, Brussels appears sold on the viability of the two projects, with them both taking centre stage during a visit to Israel this week by European Commission President Ursula von der Leyen.

“We are exploring ways to step up our energy cooperation with Israel […] For us Europeans, the stakes could not be higher. The Kremlin has used our dependency on Russian fossil fuels to blackmail us,” she said.

Von der Leyen warned: “The Kremlin’s behaviour only strengthens our resolve to break free of our dependence on Russian fossil fuels”, but while shaking up and extending the list of suppliers will improve energy security, it will remain heavily reliant on imports.

With hydrocarbons likely to continue to become more divisive in the hall of public opinion, for Israel, global supply concerns and Russia’s emergence as a pariah presents a clear political and economic opportunity, one that it appears primed and ready to grasp.