Gerard Reid – investor, financial advisor, investment banker, speaker, podcaster and blogger – is not just a leading authority on the energy transition. He is also an original thinker whose clear-cut pronouncements are firmly grounded in financial as well as technological insight. As few others, Reid, who was born and educated in Dublin, works in London as founding partner of Alexa Capital, and lives in a village outside of Berlin, takes a broad perspective of the revolutionary changes taking place in the energy and mobility sector. “You need to look at the whole system”, he says, “otherwise you can’t tell what’s going to happen in future.”

I caught up with Reid when he was speaking recently at a solar power event in the Netherlands, where Michael Liebreich, the equally visionary founder of Bloomberg New Energy Finance (BNEF), also gave an inspiring speech about the “electric re-make” that’s awaiting the world. I asked him whether he believed the energy system of the future would be based on electrons or a combination of electrons and molecules.

“We’re going 100% electric. There is no way around that”, was his answer. “You can see gas as a transition fuel, for the next few decades. In the end, electricity is the cheapest and most controllable source of energy. Our digital devices do not need oil or gas.”

For Reid the destination of our energy system is clear: it will be solar power. “The core of our energy system in 20 years is going to be based on solar. Because it’s so cheap. We did the same in the beginning of the 20th century. We chose oil because it was cheap and because oil was more controllable than coal. The same will happen now with solar power and electricity.”

As an investor and advisor, Reid says he spends a lot of time with the major oil and gas companies in Europe. He recently did a capital raise for solar company Oxford PV and was involved in selling virtual power plant operator Limejump, one of the leading suppliers of flexibility in Europe, to Shell. “Shell is further ahead than BP, but they all have the same thinking: they believe the future will be electricity and gas.”

The big question for the gas industry in Europe, says Reid, is what will happen with heat. For Reid there is little doubt that decarbonisation of heating systems will translate into electrification. But how soon this will happen, depends on government policies, he says, which are different across countries: “Denmark is the only country in the EU that’s done any work on cleaning up its heating system so far. In Germany nothing is happening in this area.” 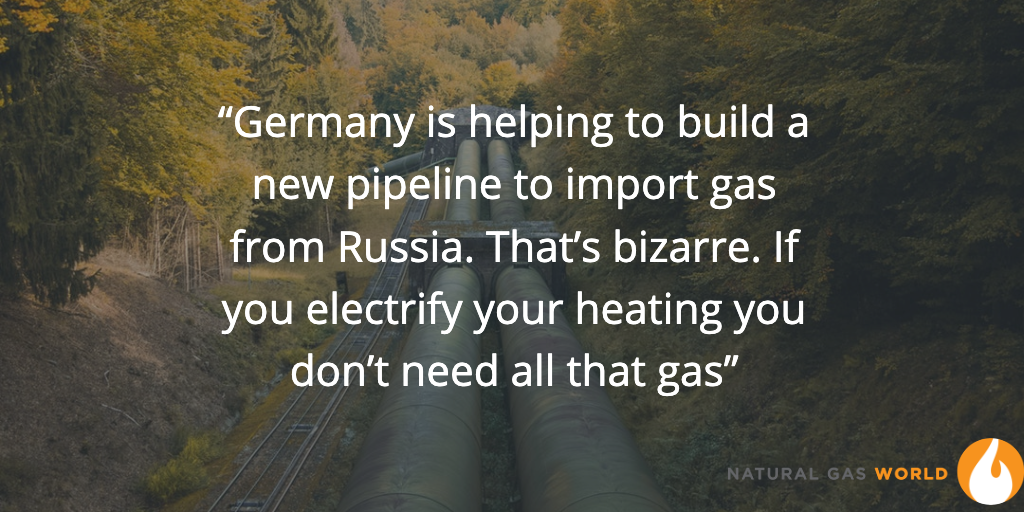 Reid notes that there are currently no incentives for German homeowners to switch from gas to electricity. On the contrary. “Households in Germany pay 7 cents/kWh for gas, 30 cents for electricity. So no one is going to change.” The price difference, says Reid, is purely the result of differences in taxes and levies. “In Germany 40% of the power mix now comes from renewables. But the costs of the energy transition are all put on the electricity bill. Of the 30 cents I pay for power, 15 cents are taxes and government charges. So there are no incentives to electrify heating or transport.”

According to Reid this could easily be fixed by increasing taxes on gas and reducing them on electricity. “But that’s a political hot potato. Politicians are afraid that people won’t like to see the price of gas go up.”

Germany may have a reputation as a climate leader, the country “is full of contradictions”, says Reid. “Many cities have CHP plants running on coal. In Berlin there are two. And Germany is helping to build a new pipeline to import gas from Russia. That’s bizarre. If you electrify your heating you don’t need all that gas.”

But is it possible, from a technical point of view, to electrify the heating and transport systems in Germany? Is there enough renewable power available?

Reid: “Oh yes, it’s possible. There are so many solutions that we even haven’t begun to think of. We will have lots of very cheap renewable energy. You can combine solar PV with batteries of course. They are also becoming ever cheaper. I bought a home storage system for €10,000, which was stupid, because then I spent €100 on a smart plug that directs my excess solar power to my hot water tank. That’s much more intelligent! So you see we have a lot of storage devices in our homes that we don’t even know he have. I could only do this, by the way, because my hot water tank is electric.”

He mentions another example: “I come from Dublin. In Dublin power demand has doubled in five years’ time. That’s higher growth than in China. Why? Because they built 700 MW of data centres. We think about data centres as big power consumers. But they are also big suppliers of heat. They should have been put next to greenhouses or a district heating network. A missed opportunity. This is the kind of thinking we need.”

Unfortunately, says Reid, we are still falling far short of what we need to do to speed up the transition. The reason has nothing to do with technology or a lack of solutions. It is, in one word, incentives. Reid: “Take the intermittency problem. To solve this, what you need to do is liberalise the demand side. Why can’t we have factories that adapt their production processes to power prices? Right now there is no price signal. In most countries in Europe there is no real-time pricing whatsoever. If I could cut my energy costs 50%, I would have an incentive to change my behaviour, but the way my electricity bill is structured, I can’t do that. And once you have pricing, you can build business models around that. Liberalising and digitalising the demand side is really critical.”

Reid argues that regulators could play a crucial role in providing better incentives, but they are failing to do what’s needed. For example, he observes that grid operators in Germany get a 9% return on equity. Guaranteed. “They are incentivised by return on equity. And they get a guaranteed return. Why would they take action? Why don’t we incentivise them to supply the best solutions? Then they might start putting technologies in place, build a smart grid, instead of only thinking in terms of expanding capacity. In the UK they are doing this to some extent, in other countries not.”

Another example: in some countries if landlords put solar panels on the roof of a building to supply power to their tenants, they are regarded as energy suppliers. “Then they have to get a licence. This should be seen as self-consumption.” There are many more examples. “We need to radically change our regulatory framework,” says Reid. “We need to talk to the regulators.” 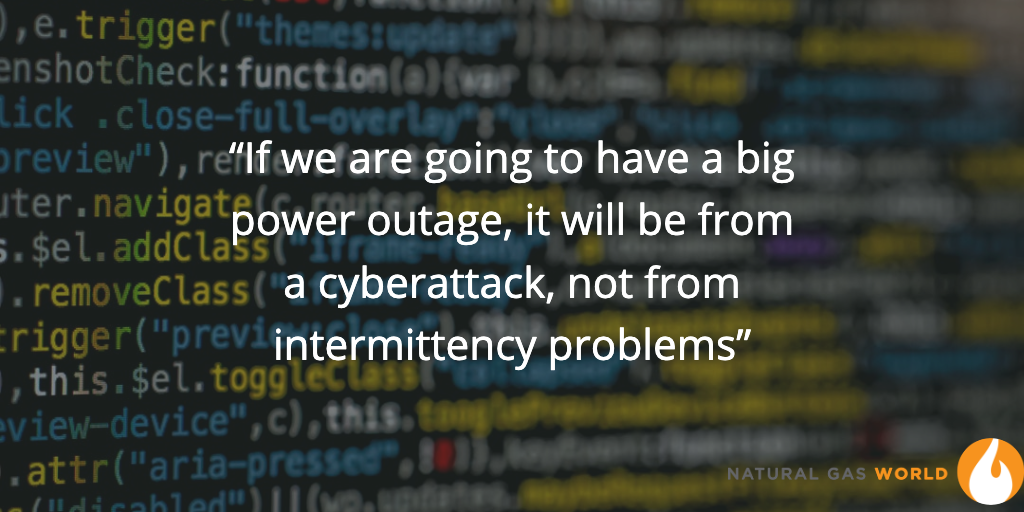 Reid says the energy establishment is very conservative. Intermittency, for example, is viewed by network operators as a threat to the stability of the network, rather than as a challenge to be solved. The real threat, he adds, comes from cyber-attacks. This threat, however, is largely ignored. “The network operators have been highly irresponsible about cyber-security. That’s because they come from the electricity side. They don’t understand software. If we are going to have a big power outage, it will be from a cyber-attack, not from intermittency problems.”

Nevertheless, despite the lack of action from regulators and politicians, Reid is convinced that the energy transition “can’t be blocked”. The combination of superior economics and (digital) technology makes its progress inevitable. “You can’t block technology. If you do, you will fall behind compared with other countries.”

Does hydrogen have a chance to become part of the solution? Reid has his doubts. “It’s a marvellous energy carrier. I was a believer in hydrogen in the past, I even invested in hydrogen companies around the turn of the century, and did money raising for them as investment banker. It turned out to be one disappointment after another. The problem is that hydrogen has not seen any commercial traction over the last 50 years. And there are powerful alternatives coming on the market, such as batteries.”

Reid notes that “in transport, battery cars are cheaper and have superior performance to hydrogen cars. With regard to power-to-gas, again it is more economic to use a battery or demand response solutions.”

If hydrogen is to have a future, it needs to scale up and bring down costs. To do this, what is needed is a “mass market”. One could, for example, make it mandatory for chemical companies and refineries to use hydrogen based on renewable energy, Reid suggests. “They might be open to that: right now, the hydrogen they produce is very carbon-intensive. If they invested massively in green hydrogen, that could really make it possible for technologies such as electrolysers to reach critical mass.”

Reid notes that if there should be “significant developments around electrolysis”, this would not be good news for gas. “Gas would be dead. If we have really cheap, zero-price energy during large parts of the day and we have a technology that can convert that cheaply into hydrogen or ammonia, that would be a game-changer. It would be the end of natural gas.” 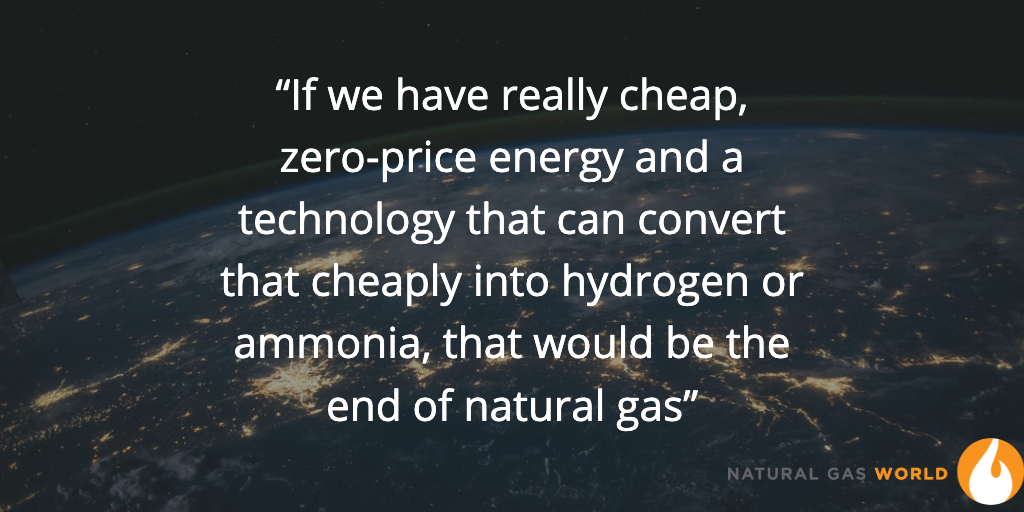 Reid is sceptical about the potential of “blue hydrogen”, i.e. hydrogen based on natural gas, combined with carbon capture and storage (CCS). “It makes no sense”, he says, “to put carbon into empty caverns where it is not useful at all. CCS will probably happen in the coming years because governments want it. But it’s not the right way to go. What we should do and what I am convinced will be done in future is to put CO2 in the ground where it can improve the quality of the soil. For farmers the carbon quality of their soil is crucial. That’s why I believe the solution will come in the agricultural area.”

Does he have any other messages for the gas industry? “Yes. There should be much more clarity on the carbon footprint of natural gas. What is the real footprint of natural gas from Russia? If you look at the methane leakage in drilling and transport of Russian gas, Germany might be better off keeping lignite plants open than importing gas. LNG from the US may also have a much worse footprint than we imagine. Other gas producers, however, may come out looking relatively good.”