Petrol and diesel prices at Indian pumps have hit short-term highs this year thanks to the recovery of global oil prices coupled with a sharp increase in local taxes. According to a recent Crisil Research report, the last time petrol prices had risen above rupees 80 ($1.1)/litre was in October 2018, when dated Brent crude had surged to $80.5/barrel. The price has now touched an all-time high of over rupees 85/litre in New Delhi even though Brent has slid to about $55/b.

Soaring petrol prices will quicken the take-up of compressed natural gas (CNG) vehicles in India as the price differential between the cost of running a petrol-driven car versus CNG has widened to 44%, according to Crisil Research. At present, India has close to 3.5mn CNG vehicles.

The increase in prices is due to higher excise duty, which rose by rupees 13/litre to rupees 32.98/litre in 2020, and value-added tax. Tax now accounts for over 60% of the retail selling price of petrol, compared with 47% in 2019. “Given that the government has to find the money to ramp up public spending – and is also promoting use of cleaner fuels – it is unlikely that the tax on petrol will come down to previous levels soon,” said Hetal Gandhi, director, Crisil Research.

In the financial year 2020-2021 (April-March), the government’s incremental revenue is expected to be significant because of higher excise duty – despite petrol and diesel sales volume likely declining by 10%-16%.

In the calendar year 2021, Crisil Research expects Brent crude to rise about 23% year/year to an average $50-55/b from $42.3/b in 2020, riding on a gradual recovery in economic activity globally. In comparison, domestic gas prices are expected to rise over 20% to $2.5-3.5/mn Btu this year from $2.45 in 2020. While the percentage increase in domestic gas prices is similar, the difference between petrol and CNG retail prices will remain wide because of higher taxes on the former.

The price competitiveness of CNG is evident in consumption volumes, according to the report, which have logged a compound annual growth rate of about 11% over the past three years. About 180,000 CNG cars and passenger vehicles were sold in the fiscal year 2020 compared with 140,000 in fiscal year 2015.

“CNG was always cheaper than petrol, but the price difference between the two has widened rapidly in the past two years. Today, the cost of running a CNG car is approximately 44% less than a petrol variant, if you consider the CNG price of rupees 42.7/ kg in New Delhi,” said associate director at Crisil Research, Mayur Patil.

Although CNG that is cheaper relative to petrol will be the primary reason for the faster adoption in the near term, India’s expanding gas infrastructure will be the demand booster in the medium term.

The Indian government is ramping up city gas distribution (CGD) networks, which is bound to drive up CNG demand. Within CGD, the CNG segment – accounting for about 40% of CGD demand – is expected to log a compound growth rate of about 25%/year between fiscals 2021 and 2023, Crisil Research said.

PNGRB, the downstream regulator, launched its ninth bidding round for the development of further city gas networks across India in 2018. This round included 80 areas that were awarded to 19 commercial entities. In addition, during the first quarter of 2019, PNGRB concluded the 10th bidding round and awarded an additional 50 areas across the country. India is expected to launch the 11th round soon, the petroleum and natural gas minister Dharmendra Pradhan said last September.

According to Crisil Research, CNG vehicles account for about 5% of the passenger vehicles sold in the country each year. With the recent implementation of Bharat Stage 6 (BS6) standards, the price of diesel vehicles has risen sharply, pushing most commercial players, such as radio-taxi companies, towards CNG.

According to the BS6 rules, emissions of nitrogen oxide (NOx) are to be brought down by a quarter in petrol engines and over two thirds (68%) in diesel engines. Similarly, emissions of particulate matter – a major cause of serious throat and lung problems – from diesel engines are expected to fall by 80%.

What would also ramp up the share of natural gas in India’s energy mix is trunk gas pipelines being laid, and deeper penetration of the CGD network. And the build-out of CNG stations in the country augurs well for the industry. Last year, Indian petroleum and natural gas minister Dharmendra Pradhan said India is set to spend $60bn on gas infrastructure over the next few years. He said the number of CNG stations in India will reach 10,000 in the next five year from little over 2,000 now.

“While growth in CNG vending outlets has more than doubled to 2,434 between 2015 and 2020, it is still significantly fewer than petrol outlets. The expansion of CGD network and increasing adoption of CNG as a fuel for personal vehicles will ensure this number increases faster than before,” Crisil Research said.

The government is working on reducing air pollution in its urban clusters and recently said a ‘green tax’ would be imposed on the country’s fleet of older vehicles. The idea is to discourage the use of vehicles that damage the environment, pushing drivers to abandon their old cars in favour of newer vehicles built to higher standards. According to media reports, the tax may come into effect from April 1. 2022.

A ‘green tax’ could be levied on personal vehicles at the time of renewal of registration certificate after 15 years that would be equivalent to 10-25% of the road tax levied on a petrol or diesel vehicle depending on the fuel. 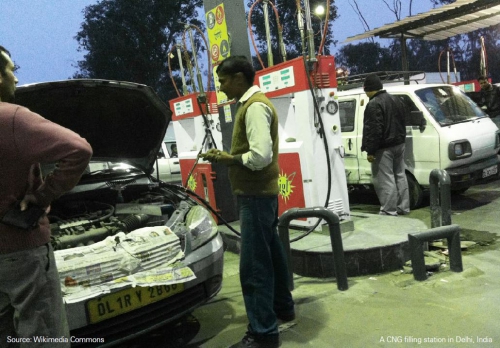 A recent report in Mint newspaper said that the ‘green tax’ will further help CNG v3hicles make an inroad into India’s automobiles market. Maruti Suzuki, India’s biggest automaker, is set to gain the most from the imposition of a ‘green tax’ on petrol and diesel vehicles, Mint said. Maruti sold a record 106,443 CNG vehicles in fiscal 2020. According to the company, sales of such vehicles have grown at an average of 15.5%/year over five years through fiscal 2020.

Maruti has been pushing CNG vehicles as an eco-friendly option when compared with diesel. Last year, the company stopped selling diesel vehicles and has plans to expand its portfolio of CNG models.

Expanding the CGD sector will push demand for gas higher and India hopes this demand will be met with adequate supplies from both domestic and foreign sources. In order to smoothe the way for more LNG imports, the country is setting up new receiving terminals on both east and west coasts.

Indian domestic gas production has been floundering for years now. However, there has been some good new recently. Reliance Industries (RIL) and UK major BP in December last year started production from R Cluster, an ultra-deep-water gas field in block KG D6 off the east coast of India.

RIL and BP are developing three deepwater gas projects at KG D6 – R Cluster, Satellites Cluster and MJ – which together are expected to meet about 15% of India’s gas demand by 2023. These projects will utilise the existing hub infrastructure in KG D6 block, RIL said. The R Cluster is the first of the three to come on stream. RIL operates KG D6 with a 66.7% interest while BP holds 33.3%.

R Cluster is about 60 km from the existing KG D6 control and riser platform off the Kakinada coast and comprises a subsea production system tied back to the platform via a subsea pipeline. At a water depth of greater than 2 km, it is the deepest offshore gas field in Asia. The field is expected to reach plateau gas production of about 12.9mn m³/day in 2021.

The next project, Satellites Cluster, is expected to come on stream in 2021 followed by the MJ project in 2022. Peak gas production from the three fields is expected to be around 30mn m³/d by 2023, according to RIL.