The US Energy Information Administration (EIA) published its Annual Energy Outlook 2021 (AEO 2021) February 3 exploring long-term energy trends in the US.

Its clear message is that the US will take some time to return to pre-Covid-19 levels of energy demand. The good news is that carbon emission growth will be contained.

AEO 2021 considers a Reference, baseline, case representing EIA’s best assessment of how US and world energy markets will operate through 2050. It is based on current economic and demographic forecasts and assumes improvement in known energy production, delivery, and consumption technologies. It also assumes that existing laws and regulations that affect energy will remain unchanged. That means that new climate change related policies that the new government brings in will not feature until next year’s AEO.

In any case, most new policy announcements have fairly long timeframes. EIA’s position is that the reference case provides a baseline against which further changes in policy, regulation and markets can be evaluated.

In order to illustrate important factors in future energy production and use in the US, the EIA also considered a number of ‘side-cases’ that consider statistically unlikely scenarios. These include high and low oil prices and oil and gas output volumes; and fast and slow economic growth.

The EIA states that in the US, in the absence of policy, energy demand is cost-driven. Natural gas prices influence competition with renewables. It is this competition between natural gas and renewables, and the fact that it is difficult to displace petroleum in the transportation sector, that drive uncertainty that is not related to policy but is market-driven. This also results in the continuation of fossil fuel use in the US throughout the projection period to 2050. 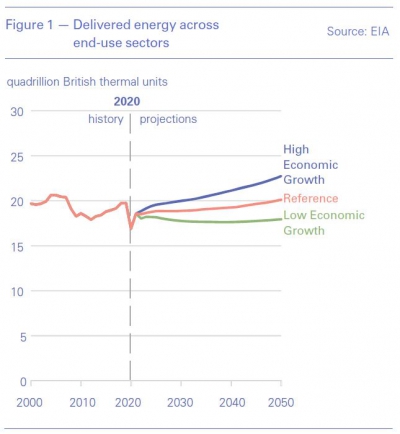 US energy consumption across end-use sectors fell by 10% in 2020 in comparison to 2019. The pace at which it will return to 2019 levels remains uncertain, depending on economic growth (Figure 1).

Based on the Reference case, the EIA projects that US energy demand takes until 2029 to return to 2019 levels. In the low economic case – based on an economy growth rate of 1.6%/yr – this might not happen until 2050.

Post-pandemic, energy consumption in the four end-use sectors, residential, commercial, transportation, and industrial, varies considerably (Figure 2). But overall, the energy intensity of the US economy continues to fall, with all end-use sector intensities declining but at varying rates. 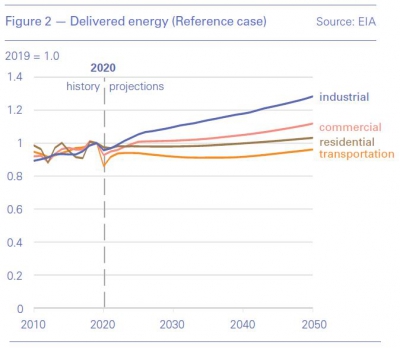 In the Reference case, energy consumption in the transportation sector remains lower than its 2019 level for the entire projection period. The EIA states that this is driven by “market-based adoption of energy efficiency technologies in new vehicles and the increasingly stringent federal fuel economy standards through for new light-duty vehicles and heavy-duty vehicles.” This is despite the fact that air travel is expected to return to 2019 levels by 2025.

Industrial energy consumption is projected to return to 2019 levels by 2023, more rapidly than in other sectors, and grow twice as fast as any other end-use sector between 2020 and 2050.

In terms of fuels, petroleum and other petroleum liquids remain the most-consumed fuels in the US, driven by the transportation and industrial processes sectors (Figure 3).

Use of renewables, wind and solar, and natural gas increases, while coal continues on a steady decline, down to 11% by 2050.

In the Reference case, the EIA projects that gas production and demand will keep growing, driven by low prices and an expectations that these will remain low (Figure 4), as well as opportunities to export it as LNG. Shale gas and associated natural gas are the primary contributors to this long-term growth.

However, the EIA states that estimates of technically recoverable tight or shale crude oil and natural gas resources are uncertain. The high and low oil and gas supply cases in Figure 4 explore the impact of higher and lower resource supply levels on domestic production.

In terms of exports, because of anticipated increases in international demand for natural gas, EIA expects US LNG to more than double between 2020 and 2029 in the Reference case (Figure 5). 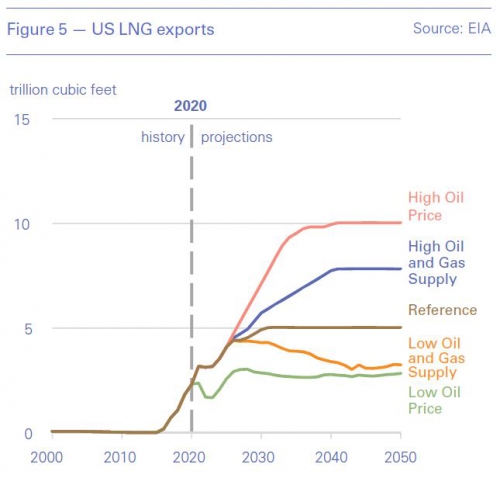 The ‘side-cases demonstrate the uncertainty in international demand for, and the competitiveness of, US LNG. With higher oil prices or lower domestic gas prices, LNG exports are much higher than in the Reference case, while the opposite occurs with lower oil prices or higher US natural gas domestic prices.

Domestically the industrial sector becomes the largest consumer of natural gas starting in the early 2020s, expanding the use of natural gas as a feedstock in the chemical industries, as well as for industrial heat and power.

Natural gas also benefits from a transition away from coal. As coal and nuclear capacity retire, new electricity capacity additions come from natural gas and renewables.

According to the EIA, “although renewable electric generating technologies account for about 60% of cumulative capacity additions throughout the projection period in the Reference case, natural gas-fired generators account for almost the entire remaining balance of additions – about 40% through 2050.”

But a concern is that the oil and natural gas industry is now more dependent on capital from cash flow. It was already headed in this direction and away from debt and equity. Covid-19 has accelerated this trend, leaving producers more dependent on internal sources of cash flow because outside funding sources are less available or require higher rates of return. In addition, increasingly, climate change and the tighter focus on environmental and social governance issues is becoming more challenging.

With policies at the state and federal level encouraging significant investment, tax credits and new technologies driving cost down, renewable resources for electricity generation (Figure 6) and transportation fuels are projected to be the fastest growing energy source in all cases considered by the EIA. 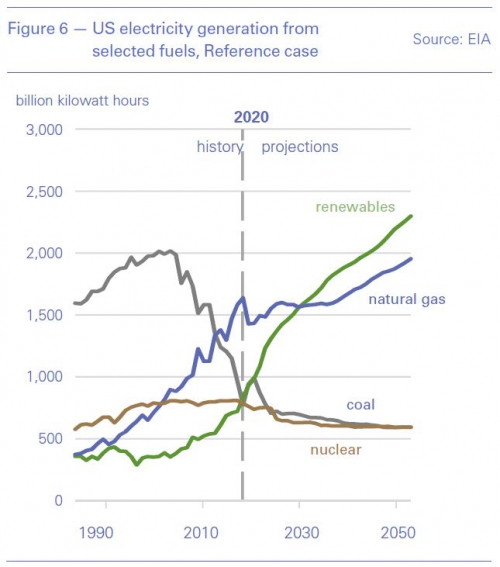 Although wind contributes to renewable electric generating capacity additions, it is on a much smaller scale compared with solar capacity, which builds steadily throughout the projection period.

In response to a question by NGW on why renewables penetration appears to be mostly in power generation and not in other sectors, the EIA said: “There is a fair amount of penetration on the end-use side. By 2050 within all renewable generation solar approaches 50%.” This probably reflects the fact that electricity use increases in the residential, commercial and industrial sectors over the projection period, but not in transportation.

That may be surprising, but the EIA states that current laws and regulations are not projected to induce much market growth, despite continuing improvements in electric vehicles (EVs) through evolutionary market developments. This requires a breakthrough in batteries.

Energy storage systems, such as stand-alone batteries or solar/battery hybrid systems, are increasingly used as an arbitrage tool to move solar and other generation from periods of high supply and low demand to periods of low supply and high demand.

Biofuels consumption in transportation is driven by federal regulation that guarantees that a minimum level must be met. At this stage hydrogen use has not advanced sufficiently and it is limited to be considered by the EIA in its projections.

Changes in carbon dioxide emissions in the Reference case reflect the shift in fuel consumption (Figure 7). Emissions decrease from 2023 to 2035 as a result of a transition away from coal to natural gas and renewable energy. After 2035, US emissions begin to trend upward, reflecting the overall increase in the use of energy as a result of increasing population and economic growth – a trend holds true in all AEO 2021 side cases.

But even in the High Economic Growth case, CO2 emissions remain lower than the 2007 peak. This is due to reductions in both energy intensity (energy consumption per gross domestic product) and carbon intensity (CO2 per unit of energy consumption) that have the effect of lessening the impact of economic growth.

The greatest challenge to EIA’s projections comes from Joe Biden’s whirlwind of presidential executive orders and measures not only to reverse his predecessor Donald Trump’s policies, but to place the US in the lead in the fight against climate change. So far these include bringing the US back into the Paris Agreement; pausing leasing of public land and offshore for exploration and production; stopping major US pipeline projects; and an order for federal agencies to eliminate fossil fuel subsidies. A commitment to net-zero emissions by 2050 is likely to follow later this year.

This is happening at a time when most US oil companies are at their weakest, reeling from the impact of the pandemic, with huge losses and asset write-offs in 2020, likely to continue in 2021.

Biden’s move to cancel the Keystone XL oil pipeline is seen by the US oil and gas industry as the beginning of the end for big pipeline projects. This has come on top of activist and legal challenges that are leading to long delays and increased costs, killing new projects.

Reacting to the developing situation, Chevron’s CEO, Mike Wirth, warned that if conditions deteriorate “we have other places to take our dollars.” He said that Biden’s climate change agenda could pose issues down the road, but it is “early days to know how this will play out.” Renewables can displace coal, but they do not displace oil and gas demand “as fast as many believe.”

Perhaps seeing the writing on the wall, the CEOs of Chevron and ExxonMobil last year considered combing the two companies, creating a giant oil and gas company, comparable to Aramco, with huge global interests. Who is to say that similar mergers will not still go ahead?

He will also face huge resistance from the oil and gas industry. Referring to Biden’s executive orders, the American Petroleum Institute (API) has already said: “We share President Biden’s goal for addressing climate change,” but “only eight days into his term, it is disappointing to report that we find ourselves in a posture of strong opposition. But we have no choice.” In addition, Republican senators from oil-producing states have already introduced legislation to block the order pausing new leasing. This has also been challenged in the Wyoming federal court by an alliance representing 200 oil and gas companies. It is highly likely that more court challenges will follow.

Biden’s ability to follow through on these orders with lasting changes will depend on the decisions of judges and Congress.

Shale oil was facing increasing challenges even before Biden. With lenders not willing to continue funding as before, production will not rebound quickly, given the required capital and the debt producers are carrying. However, the industry is now leaner and the recent oil price rise may be coming to the rescue, but it still needs to learn to live within its means.

In the meanwhile, data from EIA’s Natural Gas Monthly show that by the end of 2020 or start of 2021, industrial gas demand was already higher than in the same period of the year before, which is even faster than AEO 2021 projected.

Biden is determined to introduce a green agenda: “In my view we’ve already waited too long to deal with this climate crisis,” he said. Following the flurry of executive orders and reactions by the oil and gas industry, it is hoped that a consensus can be reached to make the US part of the global energy transition. It is in the interest of all sides.

As best-selling energy industry writer Daniel Yergin said: “I don’t think Biden is going to want to be the president who presides over the most rapid increase in US oil imports in history.”

At the same time, others, such as Tellurian CEO Charif Souki said he recognised the “need to do more to increase our standards,” adding: “We want to repair our relationships around the world and I think natural gas is going to be central to this discussion everywhere.”

This view is supported by the new US Energy Secretary, Jennifer Granholm, and by the findings of AEO 2021: continuing record domestic energy production will continue to support US LNG exports.

US gas prices up 10% in morning trade