Russian gas exporter Gazprom saw a big drop in its February exports to the European Union, with flows down 14.3% on January. This can be explained by extended lock-down restrictions in Europe and additional LNG. 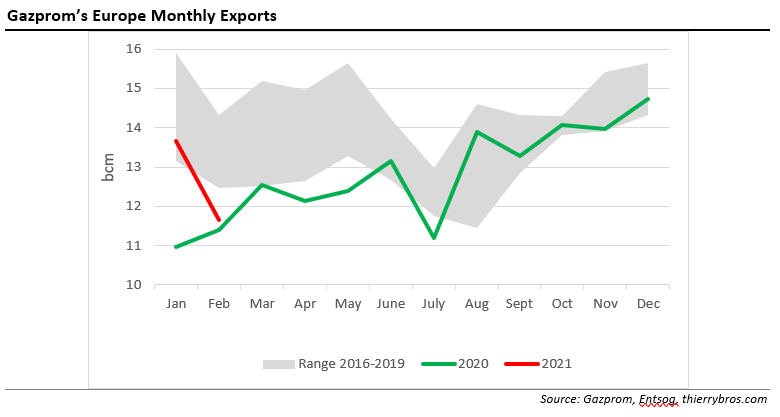 Ukrainian transit was the one that took the hit again (-52.7% vs last month). The transit deal signed December 29, 2019 between Gazprom and Naftogaz provides for 40bn m³ transit volumes for 2021. As the 40bn m³ should be on a uniform flow of 110mn m³/d, any lower historical flow cannot be mitigated by higher contracted flows. For higher flows, Gazprom needs to book additional capacity to the operator Gas Transmission System Operator of Ukraine (GTSOU). With 2.7bn m³[1] in February, the transit volumes via Ukraine were in the contracted allowances. This tends to prove that, when signing the 2019 contract, Gazprom was not so sure of Nord Stream 2 being in operation even in 2021. 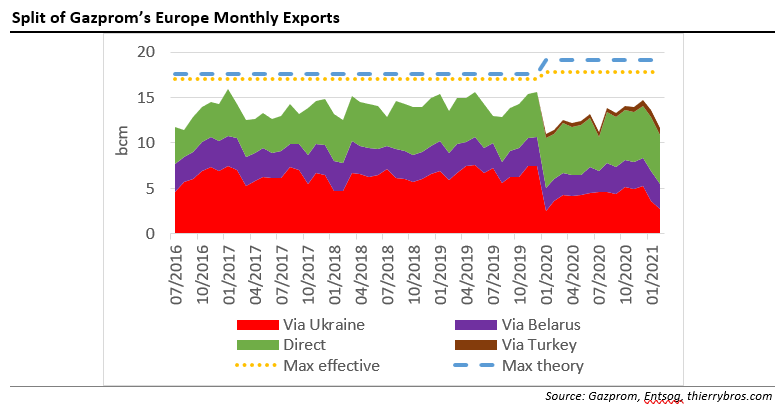 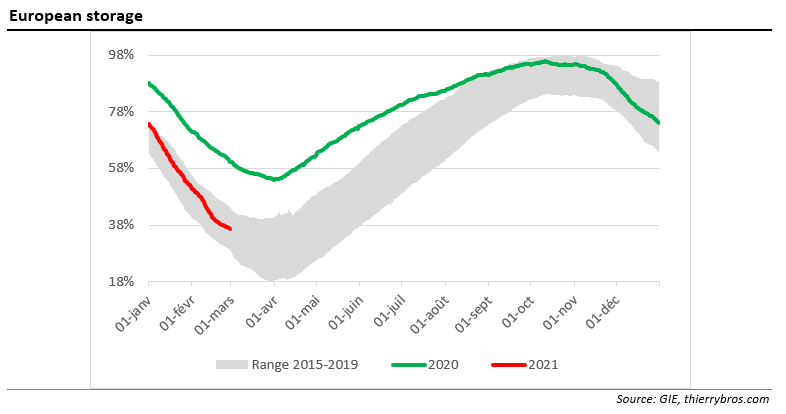 In February, LNG send outs were in Europe down by 35% vs last year but up 28% vs January as the Asian pull[2] is now over. 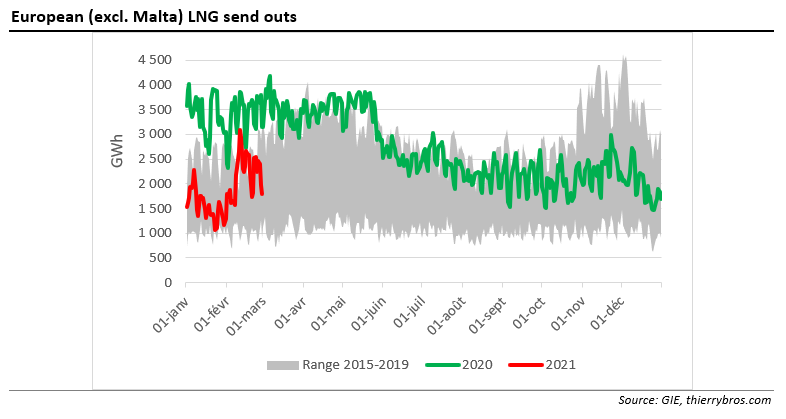 The Coronavirus-impacted-demand will continue, until EU manages to vaccinate its population, to restrain Europe demand and hence the need for imports. But as we have long been writing, Gazprom is not the only producer to swing supply any longer. All producers are sharing the burden of reducing volumes to Europe. As mentioned back in March,  April and December 2020, in front of the pandemic, Gazprom reduced its exports to Europe but did not make room for unlimited LNG.

Hence other suppliers had also to cut, either proactively or following a market signal (ie lower prices). We can estimate Gazprom 2020 spare capacity up by 34bn m³ vs 2019 (or 20% of its production capacity was idled in 2020). After having already reduced production by 6.4 bn m³  in 2019 vs 2018, Norway cut again proactively in 2020 (increasing its spare capacity to about 8bn m³). But most importantly LNG producers had, for the first time, to shut in plants: 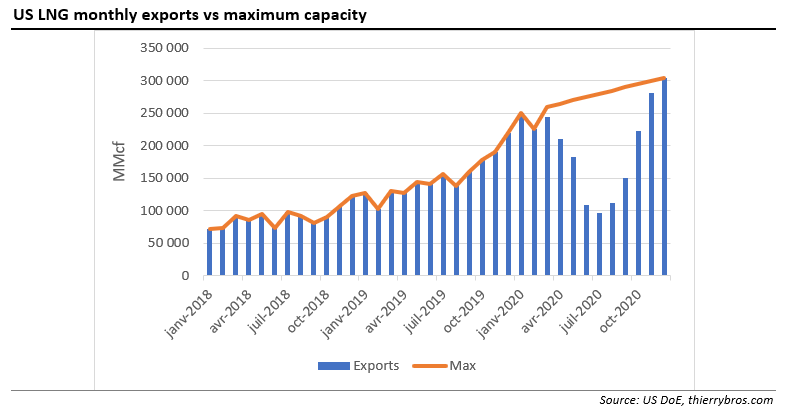 In 2020, Gazprom provided 59% of the world spare capacity[4] followed by US LNG (18%). The surge in US oil and gas production has deeply alter the energy and geopolitical landscapes. Even without being the first LNG exporter, the US (with a few companies) is now sharing with Russia/Gazprom the ultimate power to balance global gas markets…

After trending down in 2016-2018, spare production capacity has grown in 2019/2020 with Gazprom not being the only producer swinging supply any longer. This growing spare capacity negatively impacted prices.

Norway's gas production in January 2021 (latest data) was in line with the level recorded a year earlier. But more important, the Norwegian Petroleum Directorate estimates that 2021 Norwegian gas production will only be slightly up (0.6bn m³ or 0.5%) vs 2020. This shows that the Norwegian spare capacity is not going to change significatively and stay around 7bn m³ in 2021 (the same level as witnessed since 2019). 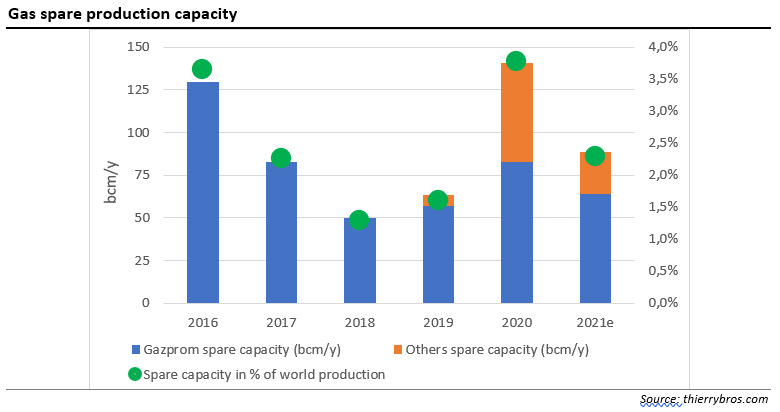 In 2020 when coronavirus caused havoc, both oil and gas producers had to stop production to rebalance markets. But the flexibility of gas producers (proactive for Russian and Norwegian pipeline and forced for LNG) helped the market to rebalance faster than the less flexible oil one. Capex cuts mean that we can also expect production to have been reduced in 2020 even if there was record spare capacity. This year, spare capacity will probably be materially lower with higher prices already visible in all major markets. The speed of the demand recovery will ultimately set 2021 spare capacity above or below the 2.3%[5] threshold between a relaxed or a tight market…

If LNG has an optionality value (it can move to where it provides the highest profit) it lacks the flexibility of pipe gas (ability to be turned on and off at short notice). In an energy transition, where Europe and Asia are long energy in the summer thanks to high solar and low demand and very short in winter thanks to low solar and high demand – and very low wind on occasion leading to blackouts – LNG production will need to become flexible with a price signal to turn on/off an LNG plant on a seasonal basis. LNG producers should think of implementing new ”produce less, earn more” contracts where they swing supply in summer to tighten the winter balance. Could 2021 be a faint copy of 2020 with Gazprom reducing supply to Europe before summer and then LNG producers being forced to shut in during summer?

[2] Record high prices in Asia diverted in January all possible spot trade away from Europe.

[5] Gas spare capacity numbers are similar to which exists in the oil markets https://www.eia.gov/finance/markets/crudeoil/supply-opec.php

Cheniere boasts of strength in a competitive LNG world