Russia learned that keeping European gas prices artificially high post-Fukushima (in 2011-2014) was a medium-term strategy – at best: the continent ended up with more LNG. Since 2019 it has benefited from much lower prices with everyone now swinging supply.

To avoid this long-term cycle being repeated in oil where US unconventional growth would only benefit from Opec+ cuts, the only sensible solution was to engage in a price war to deter expensive new project. And here the question of who blinks first might have mattered if demand destruction was not happening at the same time.

With the Covid-19 lockdowns leading to a cut of about 30% in oil demand – roughly the combined output of the US, Saudi Arabia and Russia – the only way out is a global co-ordinated production shutdown as we are witnessing with the record 9.7mn b/d cut decided on 12 April during the Opec and non-Opec ministerial meeting[1]. Could this new global collaboration go one step further as the oil production cut is still not enough to re-balance demand?

This shows that there is a major difference between the actual oil price war where all producers were at maximum capacity and gas where producers were already swinging supply. For example, on top of the cancelled US cargoes, the biggest listed LNG player, Shell, in its market update[2], has revised down by 3% its 2020 liquefied volumes. As most suppliers will follow, we could see gas spare capacity in 2020 very similar to 2016 in volumes but completely different in who takes the burden. For the first time ever, Gazprom could only hold half of the global spare capacity, as the light-blue column in the graph below shows! 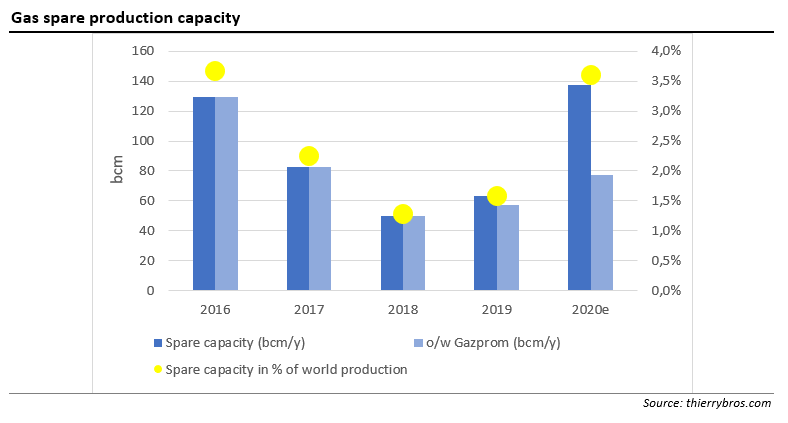 Further, gas is far less affected by the pandemic than oil[3], which is mostly used for transportation. Now that oil prices have crashed, long-term gas contracts linked to oil are becoming much cheaper, finally making gas more competitive compared with coal everywhere and whatever the pricing structure is (spot or oil-indexed). So, once demand picks up (perhaps next year?), delayed investments mean that the spare capacity will soon be used up. Hence, gas prices should recover before oil prices... Stay safe.