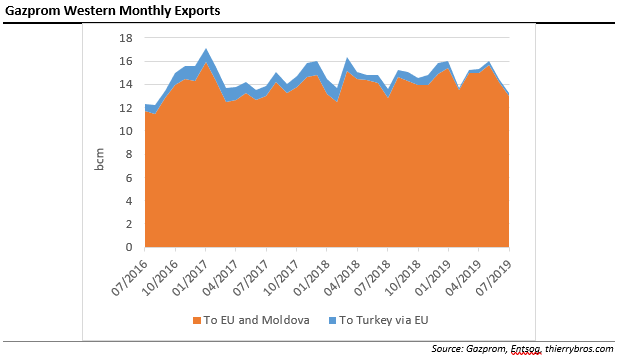 The low transit to Turkey via EU is still on-going and, since 12 February, this line has seen very little gas flowing. This can be explained by a severe drop in gas demand in Turkey since last year. According to the latest BP Statistical Review of World Energy, 2018 has been a year of very high gas demand (+5.3%) with Turkey experiencing a major drop in consumption (-8.3%).

The price competition between LNG and Russian pipeline gas has been in progress since 2015 when Gazprom responded to the opening of the Lithuania regasification terminal by discounting its gas price by 23%. Gazprom Export  is now using its Electronic Sales Platform (ESP) as an added flexibility tool. Buyers can select either to call more contracted gas (above the 70% take-or-pay) or bid on the ESP while Gazprom provides the volumes required to balance the market.

This mechanism allows Gazprom to continue to push for long-term contracts (to finance the upstream capex and transport capacity bookings) without losing market share. With spot prices very low in Europe, a lot more gas has been sold on the ESP than before. Following the commissioning of TurkStream in 2020, we could see this same mechanism being developed for the Turkish market for Gazprom to increase its market share. 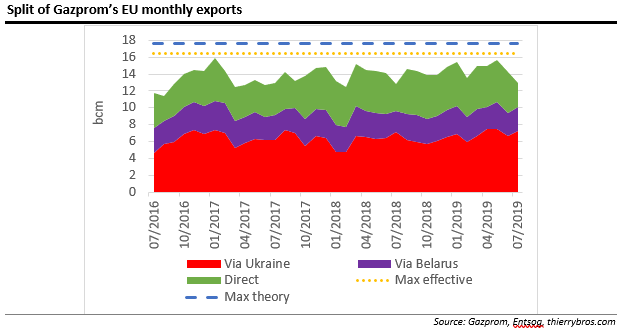 On April 12, Nord Stream 2 AG triggered the three-month consultation period during which parties must seek an amicable settlement before a notice of arbitration can be served. As no amicable settlement has been reached, Nord Stream 2, as a Swiss investor, can now defend its rights under international law by proceeding with arbitration against the EU pursuant to the investment protection guarantees of the Energy Charter Treaty.

On July 25, Nord Stream 2 brought an action for annulment before the EU General Court. Nord Stream 2 requests that EU Directive 2019/692 amending the EU Gas Directive be annulled because of an infringement of the EU law principles of equal treatment and proportionality. This and the Ukrainian transit would be the first issues that the new EU energy and climate change commissioner will have to deal with when appointed in November 2019. Let’s hope (s)he will be competent from Day 1 and won’t need, as too often, months to be up-to-speed with the domains (s)he is supposed to supervise!