Cairn has spudded its first pure exploration well in Senegal since the SNE discovery of 2014, its junior partner there Australia’s FAR announced May 26.

The new well, FAN South-1, is the tenth well to be drilled by Cairn off Senegal. All have found oil with several also finding gas-bearing sands.

FAR says the latest well has an 18% chance of success and is targeting South Fan prospect’s 134mn bbls of recoverable oil on a best estimate basis.

It is the first pure exploration well off Senegal since the discovery wells of FAN-1 and SNE-1 in 2014 and will be drilled to a total depth of 5,317 metres in a water depth of 2,139 metres. 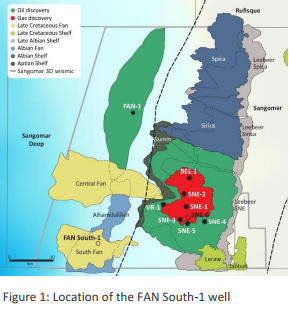 The race for the northwest African region's offshore prospects is on: BP last year farmed into Kosmos' gas and oil-rich blocks to the north and will operate any floating LNG developed there, while Total has secured two extra blocks although one of those is contested.