A turbulent time ahead [NGW Magazine]

The impact of the Covid-19 on global energy and carbon emissions over the course of this year was the subject of a review released by the International Energy Agency (IEA) April 30. This is based on real-time analysis of daily data collected for 30 countries until mid-April.

Major uncertainties surround the economic outlook, including the trajectory of the pandemic, the effects and duration of virus containment measures, reopening strategies and the shape and speed of recovery as the pandemic recedes.

But while the review is inevitably rich in caveats, it seems safe to agree with the IEA executive Fatih Birol’s observation that “the energy industry that emerges from this crisis will be significantly different from the one that came before.”

The IEA explored a full-year scenario that quantifies the energy impacts of a widespread global recession caused by months-long restrictions on mobility and social and economic activity in 2020. Within this scenario, IEA assumed that recovery from the lockdown recession will be gradual and will be accompanied by a substantial permanent loss in economic activity, despite macroeconomic policy efforts. 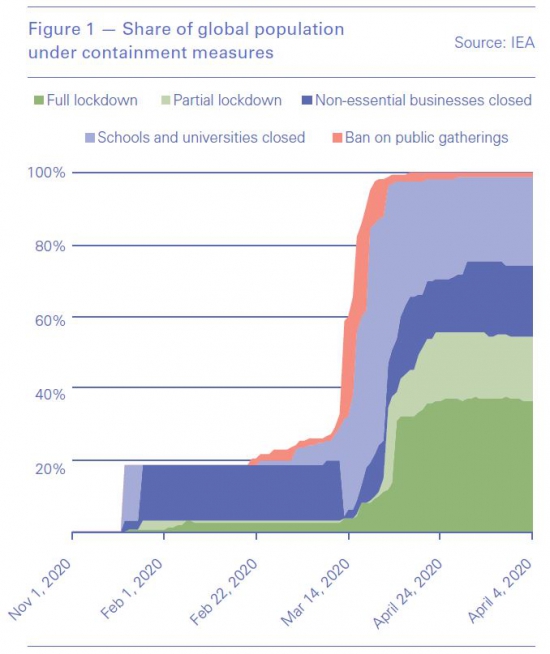 The key findings of the review are:

Extent and impact of lockdown

About 4.2bn people, or 54% of the global population, representing almost 60% of global GDP, were subject to complete or partial lockdowns as of April 28.

This has had a devastating impact on global primary energy demand (Figure 2). But the full implications are still to be felt, especially in Africa. 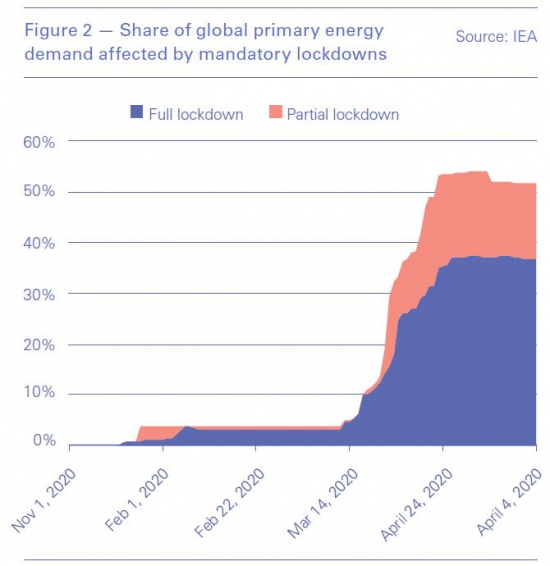 Economic and social activity resumes only gradually, with economic recovery U-shaped and accompanied by a substantial permanent loss of economic activity, broadly in line with IMF. Under these assumptions the IEA estimates that global GDP would decline 6% in 2020 – about double IMF’s estimate mid-April.

The IEA estimates that each month the worldwide lockdown continues, global energy demand is likely to fall by an additional 1.5% on top of the 6% drop.

Advanced economies are set to see the biggest declines, with demand in the US down by 9% and in the EU by 11%.

All fuels, except renewables, are set to experience their greatest contractions in demand for decades (Figure 3).

Oil demand: the biggest drop, 29mn b/d, is expected in April. Recovery in the second half of 2020 is projected to be gradual, as economies come out of containment and activity levels rise. Demand is not expected to reach pre-crisis levels before the end of the year, with December demand projected to be down 2.7mn b/d from December 2019. Some of the changes – working from home and less business and personal travel – may stay post-Covid-19, with oil demand not recovering to pre-crisis levels. 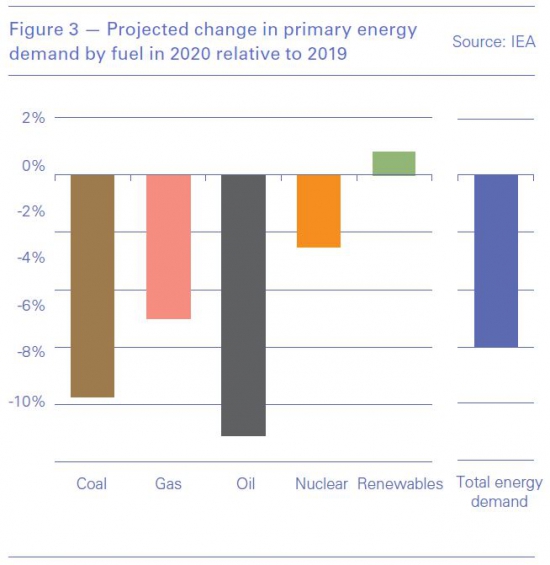 Coal demand could decline by 8%, in large part due to a fall in electricity demand of nearly 5% over the course of the year, pushing down output from coal-fired generators by more than 10%. However, the recovery of coal demand for industry and electricity generation in China would limit the global decline in coal demand. An even greater decline in coal demand is expected in India, where economic growth and power production are slowing significantly.

Gas demand across the full year could fall much further than in Q1 2020, because of reduced demand in power and industry applications – this is considered separately.

Nuclear power demand would also fall, by 2.5% from 2019 levels, in response to lower electricity demand.

Renewables demand is expected to increase because of low operating costs and preferential access to many power systems. Recent growth in capacity, with some new projects coming online in 2020, will also boost output. However, biofuels are likely to see demand decline, directly impacted by lower transport activity. The IEA estimates that total global use of renewable energy will rise by about 1% in 2020, from 2019 levels, in contrast to all other energy sources. Renewables would almost reach 30% of the world’s shrinking electricity supply in 2020, up from 26% in 2019.

Global electricity demand is expected to fall by 5%, the largest decline since the Great Depression. In all regions that implemented lockdown measures, the electricity supply underwent a notable shift towards low-carbon energy sources in Q1 2020.

Natural gas consumption was declining in 2019 and over the first months of 2020 in major markets even before the Covid-19 pandemic. The lockdowns have accelerated that decline.

Data covering half of global demand suggest that gas consumption fell by more than 3% in the first quarter of 2020. But full year projections show that global natural gas demand could decline further, by 5% in 2020.

This represents a huge shock to a gas industry that is used to robust growth in consumption, and would be the first drop in annual consumption since 2009. It would also be the largest recorded year-on-year drop in consumption since natural gas demand developed at scale during the second half of the 20th century.

The biggest impact would be in power generation, where the drop would be around 7%, accounting for almost 60% of the decrease in global demand. The decline would be especially sharp in Europe, about 7%, where the dominant role of natural gas in thermal generation would be squeezed by the decrease in electricity consumption from industry and commercial sectors, while non-fossil fuel generation remains more resilient. But very low natural gas prices mean that the impact on gas-fired generation is expected to be less severe in North America.

Natural gas supply did not adjust to this drop in consumption, resulting in a considerable oversupply and build-up of gas in storage, and very low prices globally (Figure 4).

According to S&P Global Platts, in northeast Asia, Europe and the US, by April-end benchmark month-ahead gas contracts all traded around $1.80/mn Btu. As the global oversupply continues, global gas prices are expected to remain depressed through 2020 and probably longer.

Of the almost 2.6 Gt reduction in CO2 emissions, reduced coal use would contribute over 1.1 Gt, followed by oil,1 Gt, and gas, 0.4 Gt. The US would undergo the largest absolute declines at around 600 Mt, with China and the EU not far behind. 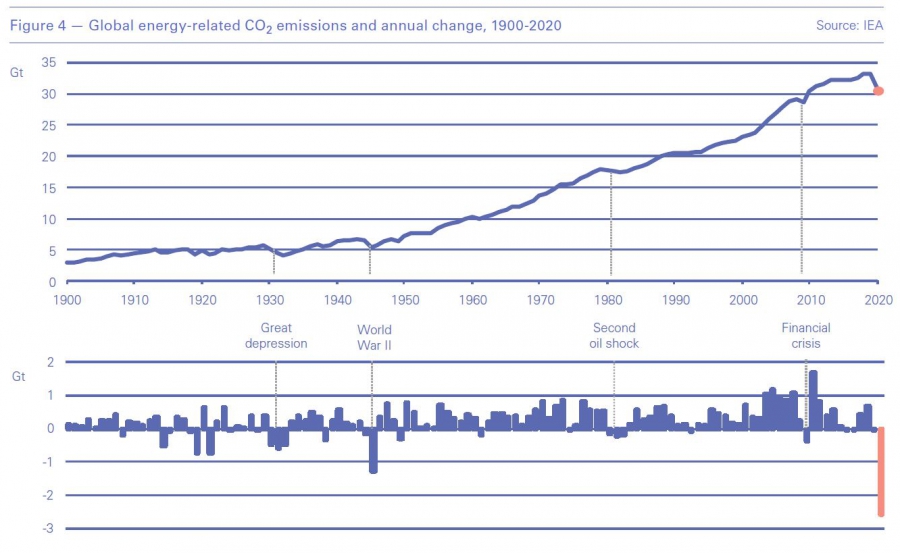 The resilience of renewable energy combined with the collapse in demand for fossil fuels means clean electricity will play its largest ever role in the global energy system in 2020 and help bring about a major reduction in global carbon emissions.

However, the IEA warns that “if the aftermath of the 2008 financial crisis is anything to go by, we are likely to soon see a sharp rebound in emissions as economic conditions improve. But governments can learn from that experience by putting clean energy technologies – renewables, efficiency, batteries, hydrogen and carbon capture – at the heart of their plans for economic recovery.” Without such pro-active action there is a risk that Covid-19 may derail the progress of the global renewable industry.

But an example of the challenges to be faced post-Covid-19 is India. Despite its ambitious plans to expand clean energy, its renewable energy sector may suffer from reduced power demand and the deteriorating financial health of the power distribution companies. In addition, as loans become scarce, new investment and construction are slowing down. As a result, the pace and scale of renewable energy growth in India could be stifled by the pandemic, slowing the country’s shift away from coal.

IEA’s review concludes that “the Covid-19 crisis and measures taken to slow its spread have had a profound impact on energy demand, the likes of which have not been seen for 70 years. The full impact of the current situation, as yet unknown, will be determined by the duration of lockdown measures and the recovery paths taken around the world. This unprecedented situation and the stimulus packages that governments are putting in place will shape the energy sector for years to come, with significant consequences for the energy industry at large, energy security and clean energy transitions.”

Business lines that are insulated to a degree from such market developments, including renewable electricity projects, will emerge in the best financial position. Private firms that are the most exposed to market prices will experience the most severe financial impacts. Market concentration and consolidations are likely.

However there is a risk that the growth of renewable capacity additions will slow down as governments strive to repair economic damage and deal with the expected recession.

Energy security has been put to the test in new ways by the crisis, including in oil and gas markets. Simultaneous supply and demand shocks have placed a colossal financial strain on producers, hurting the industry, including companies who own and operate critical infrastructure facilities. The ongoing challenging market conditions risk significant shut-in of US LNG facilities.

In one of his 'Takes', Fred Kempe, president and CEO Atlantic Council, sees a unique opportunity for the world to forge a better and more sustainable path to global energy, to reimagine the energy world post-Covid-19. “It would be a cleaner world that invests more deeply in renewables, for sure, leveraging the trillions of dollars in national stimulus programmes around the world. However, it would at the same time safeguard oil and gas industries and their millions of global jobs by advancing promising, new technologies that decarbonise their use.”

He suggests that there is a need “to lay out a practical path to a more sustainable energy system that recognises we’re going to need a lot of different technologies and that the approaches and economic implications will vary across geographies.

“The climate community will need to confront the uncomfortable truth that oil and gas will remain a critical part of the mix for the foreseeable future; the fossil fuel industry will need to accelerate the lowering of its carbon footprint.”

BP Slumps into Red in Q2 on Upstream Losses