US oil and gas producers are under immense pressure as a result of the collapse in crude prices, accelerated by the drop in demand as countries around the world respond to Covid-19 pandemic. But as oil and associated gas production – particularly in the Permian Basin – is already taking a hit, Appalachian drillers appear better positioned to weather the storm.

This is not to say that producers in the Appalachian Basin – which holds the prolific Marcellus and Utica shale gas plays – are not facing headwinds. Like shale drillers across the country, they have increasingly come under pressure from shareholders to prioritise returns over growth and demonstrate capital discipline. In addition, as associated gas production in the Permian Basin boomed, contributing to the US’ oversupply, natural gas prices have been unfavourable for some time.

“There are two sets of drivers on the supply side in the US,” a Moody’s Investors Service senior credit officer, Elena Nadtotchi, told NGW. “One is the fact that gas prices already fell in the middle of last year, so the response from supply is much more advanced than on the oil side. And two is that Appalachian players, which make up over a third of dry gas production in the US, are reducing production themselves and have been announcing sequential cuts to capex.” 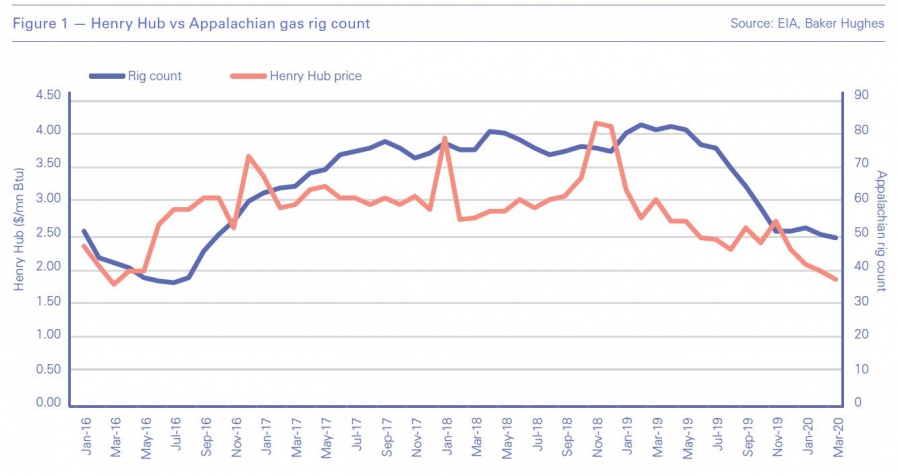 Meanwhile, about a fifth of US gas production as of the end of 2019 was coming from the Permian, according to Nadtotchi. Indeed, Moody’s warned a year ago that Appalachian gas producers were facing growing competition, especially from the Permian. Now, though, with the outlook for Permian production down drastically and constantly requiring further downward revision, associated gas output is expected to decline fairly rapidly, boosting natural gas prices. This, in turn, could spur dry gas drillers to step up activity.

Questions remain, however, over how lasting such a boost to gas prices would be, and how much added dry gas drilling would result from it.

“As associated gas volumes fall, we’d expect the supply-demand balance to tighten, and as that happens, gas prices would need to rise enough to justify additional volumes from the dry gas basins in order to balance the market,” an RBN Energy fundamentals analyst, Sheetal Nasta, told NGW. “Prices should be somewhat range-bound longer term, however, because increased drilling in the dry gas basins would support the overall production level,” she added. “Near-term, though, there are a lot of moving parts, in terms of how quickly and by how much production falls, how much feed gas demand for LNG exports is impacted by cargo cancellations, and where that leaves the storage surplus. We’re still carrying a large surplus in storage relative to last year and as long as that lingers, it’s likely to limit price upside.”

Moody’s expectations are in line with this. “Our current expectation is that the recovery will be very slow because of the overhang of inventory,” said Nadtotchi. The credit rating agency’s medium-term Henry Hub gas price assumption is nonetheless $2-3/mn Btu, and even reaching the mid-point of that range would mark a considerable improvement from the first quarter of this year. “But prices really have to improve substantially above $2.5 for producers to start getting reasonably good returns,” noted Nadtotchi.

Other factors could also come into play, including weather over the coming months. A mild northern hemisphere winter in 2019-20 served to exacerbate the natural gas glut – not just in the US but globally – and if this repeats next winter, it will undermine the price recovery.

LNG trends are another factor to consider, as mentioned by Nasta, and what happens globally will have an impact on US gas demand. US exports of LNG have been booming since they began in 2016, but global demand is now being battered by lockdowns of varying severity as countries around the world battle to bring Covid-19 under control. In April, reports emerged of up to 25 LNG cargoes that had been scheduled for loading from US export terminals in June but are now thought to have been cancelled.

Given that buyers typically have to give up to two months’ notice to cancel a contracted cargo, more cancellations could follow. Meanwhile, new liquefaction capacity continues to come online on the US Gulf Coast, and this, combined with the cargo cancellations, will make it more difficult to shrink the surplus of gas in storage.

“It will probably take a production drop-off and LNG exports remaining steady for the market to work off the current storage surplus relative to last year, especially given the Covid-related demand loss,” Nasta said.

On a domestic level, however, gas demand is not expected to be hit as hard as oil. “Most of it really depends on utilities,” said Nadtotchi. “We do expect that industrial demand will weaken, and has weakened already. This is what we've seen in other areas, certainly in Asia, where industrial demand is a much more important driver than in the US,” she continued. Moody’s estimates that demand for gas among utilities declined 5-7% in March, “which is unpleasant, but nothing like the 40% decline in gasoline,” noted Nadtotchi.

As the energy market turmoil continues, producers are announcing their results from the first quarter of the year. Among the leading Appalachian drillers, results released so far illustrate these companies’ cautious approach, which appears unlikely to change soon. Even if natural gas prices pick up as is now expected, the era of unrestrained spending on shale drilling appears to be over.

“With the Appalachian producers as you look at their announcements, I think most of them are pivoting towards life within cash flow,” said Nadtotchi.

Moody’s notes that gas production in Appalachia was already down 5% on 2019 levels by May 2020, and while some drillers are still reporting year-on-year output growth, overall the downward trend is expected to continue.

Ongoing reductions in capital spending is a notable trend seen in gas producers’ first-quarter results. EQT Corp., for example, said in its preliminary results announcement that it had spent 25% less capital compared with the prior quarter. Antero Resources, meanwhile, has reduced its 2020 capex budget twice since February, to $750mn, from $1.15bn initially. Range Resources and Southwestern Energy have also reduced their capex budgets.

Both Nadtotchi and Nasta said the results they had seen so far were roughly in line with expectations in the current operating environment.

The fact that some production growth continues to be reported illustrates how far shale gas drillers have come in terms of technological advances and efficiency gains. But these producers are no longer aggressively pursuing growth, and the broader drop in output reflects that.

The US Energy Information Administration (EIA) has been forecasting monthly declines in Appalachian gas production since late 2019, and for now these declines are expected to become more pronounced. However, as associated gas production in the Permian drops and prices rise, the share of gas produced in Appalachia could rise. These shifts may then prompt Appalachian drillers to step up activity somewhat, albeit cautiously, further down the line.

“The supply distribution across oil vs. dry gas basins would shift as drilling slowdowns in oil-focused basins fully materialise and once prices are high enough to prompt more activity in the dry gas basins,” said Nasta. For gas drillers, such expectations are a bright spot in an otherwise bleak picture.