Iran is preparing to start drilling Phase 11 of South Pars next month, using an old platform it is moving from another phase which has faced pressure fall much sooner than expected.

South Pars is the world’s biggest non-associated gas field, of which a third (14 trillion m³) is in Iran and the rest in Qatar. It is divided into 24 phases on the Iranian side, of which 18 phases have been completed, 5 phases are being developed and only phase 11 remains undeveloped.

The French major Total had been awarded Phase 11 rights, but it left when the US withdrew from the nuclear deal with Iran in 2018 and re-imposed sanctions.

Iran inaugurated phase 12, the biggest layer of the giant South Pars field, six years ago. It can produce 84mn m3/d from its four platforms. But it installed only three platforms in this phase owing to the expected drop in pressure on the Iranian side of the reservoir by 2023.

In 2017, according to official data seen by NGW, phase 12 had been producing 65mn m3/d since the start of commercial operations, but the latest statistics from National Iranian Gas Company (NIGC) put its output at 59mn m3/d in the fiscal year to March 20, 2019.

The director of engineering and construction at Pars Oil & Gas company Rasul Fallahnejad announced May 3 that one of the three platforms at phase 12, with capacity of 28mn m3/d, would be transferred to phase 11 owing to the accelerating pressure fall at this phase.

According to NIGC’s assessment, production at the South Pars development as a whole should peak in 2023, and then begin declining sharply. The gas pressure at its platforms is about 120 bars, but after 2023 it will fall naturally by 7 bars/yr, causing output to fall 10bn m³/yr.

Iran needs to install at least 10-12 giant platforms weighing 20,000 metric tons each – 10 times the size of the current platforms – capable of carrying two or three huge compressors to maintain the production level which would otherwise halve by the 2030s.

South Pars is important for Iran, because it holds 40% of Iran’s total gas reserves and produces three quarters of the country’s total.

Iran signed a $4.8bn agreement with French Total and Chinese CNPC in July 2017 to develop phase 11, including construction of the first 20,000-ton platform, but Total left the following year.

Iran’s Petropars company, which had a 19.9% stake, will now start developing the project itself next month, including drilling 30 wells and building five pipelines, a fibre cable and a mooring buoy to produce 56mn m3/d from this field, using a 2,000-mt platform which is now working on phase 12.

Iran planned to develop phase 11 two decades ago, but lacked the money and postponed the project. Now though, with US sanctions and the low oil price, the situation is even more complicated for Iran. State-owned National Iranian Oil Company (NIOC), responsible for upstream oil and gas projects, has debts of $50bn.

According to the International Monetary Fund’s April estimates, the Iranian government faces a $43bn budget deficit this year and its net debt would soar to $148bn, or over a third of its GDP.

Last fiscal year, ended March 20, the Iranian government put NIOC’s budget at $24.49bn, including $4.6bn foreign investment and $4.46bn oil export revenues (14.5% of total oil and gas exports revenues). The country could not absorb any foreign investment and it exported only 43% of the 1.54mn b/d that were allowed for in the budget, according to statistics from energy intelligence firm Kpler.

NIOC was obliged to pay debt of $15.7bn last fiscal year and invest $8.8bn throughout the oil and gas value chain. Although it has not published its financial results, a parliamentary research centre estimates that last year NIOC could only cover a third of last year’s budget.

For this fiscal year, the government’s budget puts oil exports at 1mn b/d and $50/b. But it is selling its oil below $15/b free on board in the Persian Gulf, while the production cost (capital and operating expenses together) of Iranian oil is $12.6/b.

Kpler told NGW that according to initial estimates, Iran’s oil loadings to the international markets were about 225,000 b/d in January-April.

Only China and Syria import Iranian oil officially. It is not clear whether Syria pays money for Iranian oil or not, but China’s Custom statistics indicate that the country imported 81,000 b/d of Iranian oil in January and February and 62,000 b/d in March. China’s customs administration puts the value of those imports at $452mn in the quarter.

Chinese CNPC and Sinopec have invested $5bn in Iran’s Azadegan and Yadavaran oil fields and Iran is obliged to pay off the debts to CNPC and Sinopec by delivering crude oil instead of cash money: foreign investors in Iran are not allowed to own the reserves.

Last winter, Iran cut gas exports to Iraq from 28mn m3/d to 3mn m3/d to meet soaring household demand, which took above 600mn m3/d. but NIGC said late April that exports to Iraq had since gone up to 32mn m3/d as its own heating demand fell to 250mn m3/d.

NIGC claims its total exports grew 26% yr/yr to 17.5bn m3 in the last fiscal year. Turkey’s official statistics indicate 7.8bn m3 came from Iran during this period, which was the same as the year before, while Iraq received 4.8bn m3 of gas from Iran in the previous fiscal year (ended March 20, 2019).

Iran has two gas sale agreements to export 50mn m3/d to Iraq, but the US gives only one-month waivers for Iraq to continue buying Iranian gas and power in restricted amounts.

Iraq needs Iranian gas for its thermal power plants. About a third of the country’s power demand comes directly from Iran or is generated at power plants which run on Iranian gas. Its summer peak demand stands at 25 GW, while the domestic power generation capacity is below 20 GW, leading to frequent power outages.

Iraqi electricity minister Luay al-Khatteeb said recently it would take three or four years to redirect associated gas, which is now flared, into power generation and so make the country independent of Iranian gas.

The JV added more than 3bn m3/yr to commercial gas output in 2018, it would take $10bn to develop new projects.

Iran also exports to Turkey but that pipeline was blown up on Turkish territory on the morning of March 31, cutting off supplies.

This is the eleventh such terrorist event in 15 years and on past occasions it has always been repaired in one or two weeks. However, NIGC announced April 28 that it would take at least two and a half months this time, meaning that Turkey will take no gas from Iran this quarter. 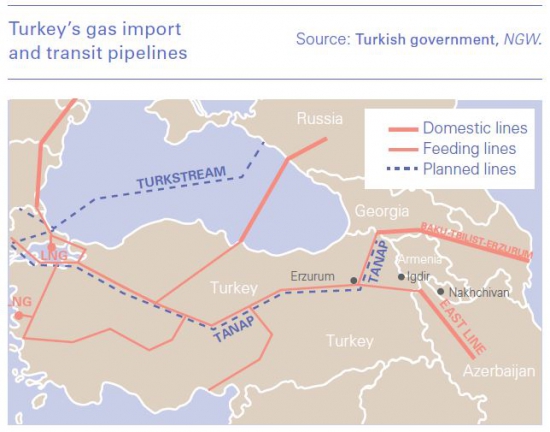 The two countries’ gas monopolies signed the memorandum when relations between Azerbaijan and Iran were frosty. Those sales of Iranian gas are now at risk: this 160-km pipeline will also make Turkey’s eastern regions independent from Iranian gas.

Turkey’s gas purchase contract with Iran expires in 2026 and the country has been increasing its imports of Azeri gas thanks to the completion of the second stage of the Azeri offshore gasfield Shah Deniz and the associated Tanap.

Relations between the two neighbours have improved since Iranian president Hassan Rouhani took office in 2013. But after the US began imposing sanctions on Iran in 2018, Azerbaijan has sought to limit Nakhchivan's dependence on Iranian gas.

Azerbaijan’s gas supplies to Iran totalled 395mn m3 of gas last year. Iran only delivers 85% of the volumes it receives to Nakhchivan, however, keeping the rest as a transit fee. Baku has several times asked for the terms of the arrangement to be revised, including the transit fee, but Tehran has rejected this.