The sailaway of the first Shah Deniz jacket on time on September 1 from its Caspian Sea shipyard was marked by a quayside ceremony involving the Azerbaijan president, Ilham Aliev, and BP country boss Ewan Drummond. The $40bn-odd Caspian Sea-southern Italy project will, when complete, be an immense feat of commercial, political and mechanical engineering, whose timing could not have been more precarious, given the falling market now foreseen for early next decade; and that is only half the battle as the southern gas corridor is designed to carry another 16bn m³/yr westwards across Turkey. 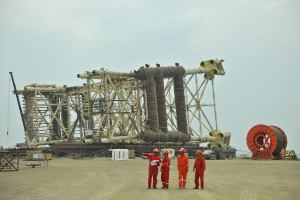 The first jacket for the Shah Deniz 2 project, at the yard (Credit: BP)

Russia shrugged off further US economic sanctions, imposed on September 1, at a trade fair in the far eastern port of Vladivostok. Over the following few days Its biggest upstream companies Gazprom and Rosneft announced a string of agreements and possible investments in all aspects of the energy chain, from seismic acquisition (with UK major BP and US giant Schlumberger) down to studying the construction of Aframaxes that run on methane (with Russian and South Korean firms).

Gazprom also went ahead with its second winter gas auction, in a move to develop a more market-oriented approach to gas sales than the conventional flexible long-term contracts: last year’s round (same period, same delivery points) was far from fully bid for but the summer auctions, for the Belarus-Lithuania did a bit better, and now the process might be even slicker. However it has not revealed how many lots are on the block this time. The reserve price is also confidential. Delivery profile is flat, 100% take or pay.

Relations between the European Commission and Ukraine remain friendly, with the EU commissioner for energy union, Maros Sefcovic, visiting Kiev in early September and keen to help Gazprom and Naftogaz Ukrainy reach an agreement on winter gas deliveries and transit. The last one expired in June. Naftogaz has not imported any Russian gas since last November when it took  just 390mn m³. It imported no gas in Q2 this year and only in July began importing again. Meanwhile its storage inventories remain at perhaps historic lows. Sefcovic also approved of the thinking behind the Naftogaz unbundling plan, in compliance with the EU Third Energy Package.

There was more fighting in the Nigeria Delta, despite talk of a ceasefire: apart from the Niger Delta Avengers, there are other groups active such as the Niger Delta Red Squad (NDRS) and Niger Delta Searchlight (NDS) that have claimed responsibility for attacks on oil and gas pipelines and so cutting flows of gas to the Nigerian LNG facility. An Eni-operated pipeline was attacked as recently as September 1, reported Nigerian news site Naji, adding that NDRS had said it was responsible.

Better news for Eni in Africa’s upstream sector was its fifth successful well in the Zohr mega-field in Egypt, confirming gas in place of some 850bn m³. First gas is due at the end of next year, by which time the results of the first offshore Israeli round should have been decided.

Launched this week on a ministerial roadshow taking in also Singapore and the UK, the round could trigger all kinds of incentives, including, reportedly the creation of a buying consortium to spread offtake risk once the gas is landed. Energy minister Yuval Steinitz was in London September 1 meeting upstream executives and setting out the rules.

Israel is thought to have greater potential as a means of unlocking gas reserves than the Cyprus-Egypt gas trade agreement in principle signed August 31, although Israel has been poised to join the gas exporters’ community for quite some years: the Leviathan field was found in December 2010. Relations with Turkey have thawed this summer.

Part of the reason for the delay was the size of the field: it was so big that it threw up all kinds of policy questions, such as how much gas should be exported and was there a risk in having a small number of companies in the offshore.

Accordingly Delek Group, is set to sell its 31.25% holdings in another licence, the Tamar Partnership, probably through a special purpose company (SPC). The company plans to transfer all its Tamar holdings to the SPC and then go to an IPO in either New York or London. First details of Delek Group's plan to divest its holdings in Tamar were revealed this week by CEO Asaf Bartfeld during an analysts' call following the filing of the group's second quarter results.

According to the Regulatory Natural Gas Framework Delek must do this within six years of the Framework's approval. Noble Energy, the biggest stake holder in Tamar with 36% and the operator, has to sell down to 25%. In July Noble concluded a deal to sell 3% of Tamar to Harel Group, one of Israel's biggest insurance group in a $369mn deal that partner Noble says values the project at $12.3bn.