To export natural gas to different markets, Turkmenistan needs to improve its pipeline infrastructure. At the time, there are two pipeline routes; one going to China with the current capacity of 55 bcm per year and another going to Russia with a capacity of 80 bcm. 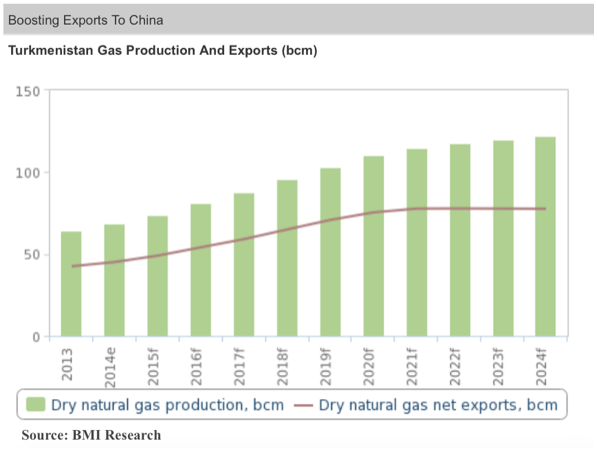 The main natural gas field that will drive the country’s gas production in the future is the Galkynysh field. The Galkynysh project started the production in 2013 and will add roughly 20 bcm per year of natural gas by 2020. By increasing its gas production, Turkmenistan is looking for export markets that would secure its infrastructure routes to different markets, because it is not in the country’s interest to be dependent only on one market, which is China at the time. 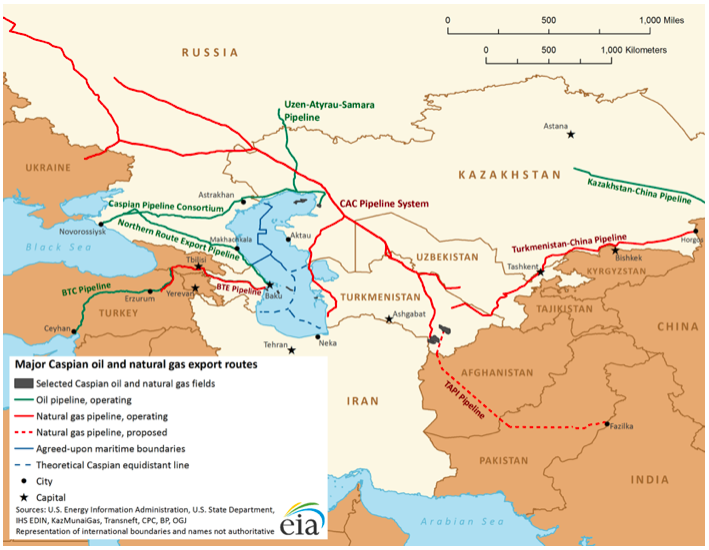 As part of its Silk Road Economic Initiative, China invests in energy-rich Central Asia. Since Turkmenistan is the richest country on natural gas in Central Asia and China plans to increase its gas consumption due to environmental issues, China and Turkmenistan have been expanding their pipeline infrastructure to send the blue fuel to the Chinese Xinjiang province.

According to BMI Research, China will increase its gas consumption from 171 bcm in 2013 to 283 bcm by 2020. Turkmenistan might play a significant role as Chinese gas supplier. Turkmenistan’s geographical location allows the country to build pipelines to China and to deliver gas on competitive price basis. Already in 2012, China imported 60 percent of natural gas from Turkmenistan, and BMI Research forecasts that Turkmenistan will maintain this share in Chinese gas market, despite China’s projects with Myanmar and Russia.

The Central Asia – China pipeline connects Turkmenistan and China via Uzbekistan and Kazakhstan. This pipeline consists of four lines. Line C with an annual capacity of 25 bcm went on stream in May 2014. Line A, B and C has a total capacity of 55 bcm per year of natural gas. Turkmenistan plans to increase the capacity to 80 bcm per year by 2020 by constructing Line D that is projected to go on stream by 2020. The multilateral agreement between China and the Central Asian countries foresee 85 bcm of gas exports to China by 2020, where Turkmenistan will deliver 65 bcm of the total 85 bcm per year.

In 2014, Turkmenistan delivered 25,9 bcm of natural gas to China, even though the agreement between the two countries foresaw 30 bcm in 2014. China expects to receive 40 bcm of Turkmen gas in 2015. Obviously, China is Turkmenistan’s main client for natural gas, but Turkmenistan plans to diversify its gas export market to reduce the reliance on one market. The diversification will improve energy security and will give Turkmenistan more political and economical freedom to maneuver and to pursue its national interests.

The second largest importer of Turkmen gas is Russia. The Central Asia – Center pipeline sends Turkmen gas to Russia. In its turn, Russia either sells it to Europe or consumes it domestically. However, the fall of gas prices that are oil-indexed reduced the volume of gas that Russia purchased from Turkmenistan in 2014. The volume of purchased gas dropped from 10,5 bcm in 2014 to 4 bcm in 2015. The reason was high prices for natural gas that Russia had to pay to Turkmenistan, because the long-term agreement was signed in 2010 when natural gas prices were at a high level due to the oil-indexation. Since the gas prices decreased, it became less profitable to buy Turkmen gas at the price of $240 per thousand cubic meters. Therefore, Gazprom tried to negotiate with Turkmenistan to reduce the price, but the country didn’t agree to Gazprom’s terms. Despite the disagreement, Russia continues to buy natural gas from Turkmenistan. According to Gazprom, the Russian gas company will not break the agreement with Turkmenistan.

Taking into account that Russia sees Turkmenistan as its sphere of influence, Turkmenistan might encounter geopolitical challenges to use the Central Asia – Center pipeline to increase its gas exports of gas to the European market. Considering an economic perspective, Turkmenistan is a competitor to Russian gas, and so it is in Russia’s power to control the flow of Turkmen gas through Russia to Europe. Therefore, the Central Asia – Center pipeline will not be a game changer for Turkmenistan’s diversification strategy.

Iran is the third export market for Turkmen gas. However, the lifting of sanctions against Iran transforms two countries to competitors rather than to trade partners. Brussels forecasts that Iran will become a major gas supplier to the European Union by delivering 25-35 bcm per year by 2030. Iranian gas is expected to reach the European gas market as LNG via Spain. Instead of linking Iran to the Southern Corridor, the EU needs to improve the gas pipeline network with Spain. Nonetheless, sanctions against Iran need to be lifted before that project can take place.

Iran does not plan to construct a pipeline to the EU. According to National Iranian Gas Export Company, the construction and transit costs of a gas pipeline would be too high. The pipeline would be roughly four-five kilometers long. Since the pipeline would go through multiple countries, that would lead to the rise of transit costs. In this case, LNG from Iran would be more economically feasible. Therefore, it might be difficult for Turkmenistan to reach the European gas market via Iran. The lifting of the Iranian sanctions will give Iran an opportunity to finally profit from its vast reserves of natural gas. Turkmenistan would be a competitor in this regard.

The future lifting of Iranian sanctions will transform Iran and Turkmenistan to competitors. Most likely, we will not observe large breaks through in the negotiations between these two countries in the near future.

Brussels is interested to diversify its large natural gas supplier Russia, and Turkmenistan represents an alternative with large gas reserves and a geographical location that allows building an economically feasible pipeline. The Trans-Caspian Pipeline (TCP) would connect Türkmenbasy, a Caspian port city in Turkmenistan, and Sangachal Terminal located at the Caspian coast in Azerbaijan. The TCP would be able to connect Turkmenistan to the TANAP pipeline, which has a capacity of 16 bcm per year. This way, Turkmenistan would send 10 bcm per year to the EU, which is still significantly low in comparison with the gas exports to China.

The European Union has also increased official visits to Turkmenistan in recent years. The EU stated that the TCP pipeline could be built by 2019. However, this project has received a disagreement from the Caspian countries Russia and Iran because of the undecided legal status of the Caspian Sea. Apart from the legal issue, TCP requires Turkmenistan and Brussels to undertake commercial arrangements. Even though it is uncertain, whether the construction of the TCP pipeline will start any time soon, Turkmenistan is building its East-West pipeline.

Interestingly, the EU gas consumption has dropped since 2010. In comparison to 2013, the EU’s natural gas consumption dropped by 10,7 percent to 16,046 thousand terajoules. Besides gas imports via pipelines, the European Union imported 14 percent of its gas as LNG in 2013 coming from Qatar, Algeria, Nigeria and others. Also more expensive LNG imports to the European Union decreased by 29.1 percent in 2013 comparing with 2012. However, Eurogas, an NGO based in Europe, forecasts a 7 percent increase of natural gas demand in the EU in 2015 compared to 2014. Taking into account the EU’s energy targets such as energy security and reduction of CO2 emissions, natural gas will play an important role in the European market, because the blue fuel is less pollutant than coal and is flexible to be used as back up for fluctuating renewables. The gas demand in Europe depends massively on the weather conditions. Considering the energy security issue, the EU’s gas imports from non-EU countries will increase, because the gas production of the European countries is in decline. Since the most competitive gas comes from Russia, Europe’s energy security might be undermined, if the EU relied predominantly on Russia’s supplies. 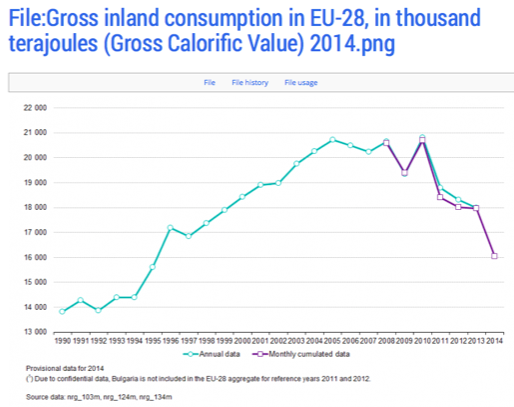 Consequently, Turkmenistan and the EU would mitigate their energy security, if they meet an agreement for Turkmen gas supplies to Europe. However, the legal status of the Caspian Sea and commercial arrangements need to be resolved first.

Although the four countries have reached an agreement, it is important to mention that the pipeline is facing security and economical issues. Since TAPI will go across Afghanistan’s and Pakistan’s provinces, where Taliban has its location, the building of the pipeline and its security might be endangered. Another challenge for the pipeline was the pricing issue. Nonetheless, the beginning of the TAPI construction demonstrates that parties have came to the agreement by mitigating the risks.

Turkmenistan’s gas relations are worsening with Russia. Therefore, Turkmen gas will not see an increase of its gas flowing to Europe via Russia. The same is with Iran. With the future lifting of sanctions against Iran, Turkmenistan will transform to a competitor. In addition, Iran plans to export LNG rather than to build new infrastructure.

Turkmenistan and the parties to the TAPI pipeline mitigated all risks and have announced the construction of the pipeline. In its turn, Turkmenistan has found a market that does not challenge Russia’s geopolitical and economic power and at the same time diversifies Turkmenistan’s gas export market. At the time, it is the most realistic diversification route for Turkmen gas.