Coal demand worldwide grew by 1.1% to 7,585mn metric tons (mt) in 2017, after two years of decline, according to the International Energy Agency’s December Coal 2018 report.

It looks set to rise for the second year in a row in 2018 and no decline is forecast over the next five years as strong growth in India and southeast Asia is offset by declines in Europe and North America.

Stronger economic growth in 2017 spurred both industrial output and use in power generation. China accounted for 48% of global 2017 coal use, while the growing Indian market was 12%, the US and EU were 8% each, southeast Asia and Russia each 3%, Japan 2.5%, with the rest of world 15.5%.

Coal in China alone accounted for 14% of global primary energy.

Global coal use is expected to grow again in 2018 with negative consequences for climate change. The IEA noted that market trends are proving resistant to policy aspirations.

Worldwide 2018 carbon emissions will rise by 2.7%, up from +1.6% in 2017, estimate researchers at the UK's University of East Anglia (UEA) and the Global Carbon Project (GCP) in a report early December. 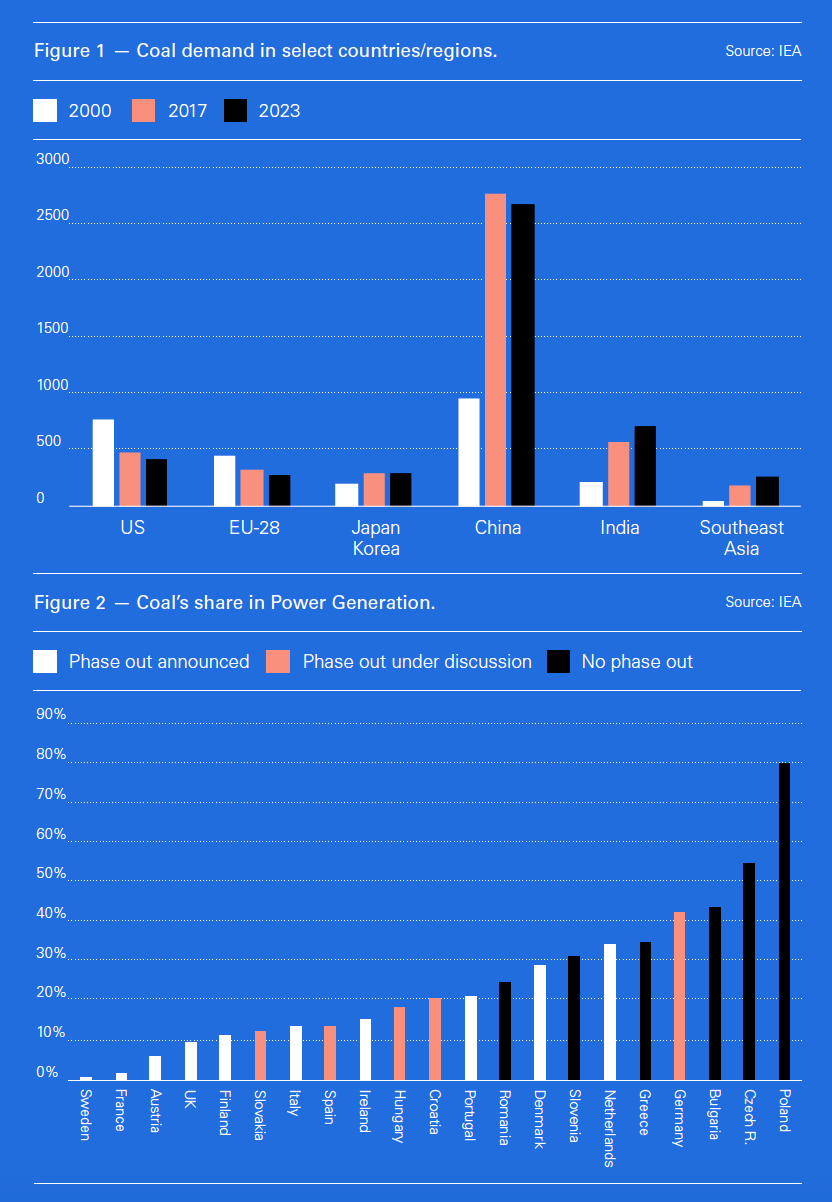 "The story of coal is a tale of two worlds with climate action policies and economic forces leading to closing coal power plants in some countries, while coal continues to play a part in securing access to affordable energy in others," said IEA director of energy markets and security Keisuke Sadamori December 18 at the report’s launch: "For many countries, particularly in south and southeast Asia, it is looked upon to provide energy security and underpin economic development.”

US coal consumption fell 2.6% to 641mn mt in 2017 but even there its production increased.

One out of every four tons of coal used in the world is burned to produce electricity in China and yet the IEA sees its electricity intensity declining over time, halting further growth in coal-firing post-2020, and leading to a small decline in its overall demand out to 2023 on the back of its clean air policies.

China remains the wild card – a 10% rise in its hydro generation can lead to a 1% decline in world coal use. But the IEA report acknowledges there’s a risk that China’s active ‘blue skies’ clean air policy of promoting gas, renewables and nuclear – at the expense of coal – may revert to a more ‘business as usual’ attitude.

One point made in the report is that the average Chinese coal-fired power plant’s efficiency increased from 33.3% in 2005 to almost 40% in 2017 – which meant that almost 400mn mt less coal was burned in 2017 to produce the same power. The consequent reduction of 750mn mt CO2 in 2017 was equivalent to Germany’s entire annual CO2 emissions that year.

The report foresees demand in all Chinese sectors declining, with the exception of coal conversion to liquids (CTL) and to chemicals – the largest such sector in the world, but a small part of overall Chinese demand  – where capacity is set to more than triple from 7.1mn mt/yr in 2017 to 23mn mt/yr in 2023

In contrast India's coal demand grew more rapidly in 2017, up 4.4%, to reach 942mn mt (12% of the world total) having grown continuously since 1974, with everything pointing to future growth too. Overall India’s coal use by 2023 is forecast to be twice that of the EU.

Many southeast Asian nations -- Indonesia, Vietnam, Philippines and Malaysia -- increased their overall coal use in 2017 and are expected to do so in near-term too. Malaysia is using more coal and less gas and oil in the power mix. South Korean coal use climbed by 11.5% in 2017 to 150mn mt, with 6.3 GW of coal-fired plants commissioned 2017.

Alongside India, southeast Asia will remain the other engine of coal’s growth at 5% per year through 2023. New coal plants in Malaysia but also in the UAE and even Turkey will be developed thanks to a deliberate policy of diversifying its energy mix, rather than curbing emissions.

Turkey likewise consumed 113mn mt of coal in 2017, up 5.8%, after 1.4 GW coal-fired plants added 2016. Ukraine consumed 13% less at 47mn mt possibly because of the loss of Donetsk and Luhansk plants to Russian control.

The report found that 61% of the world’s coal in 2017 was used for power generation, while 19% for iron/steel, 20% for other industrial processing – including cement – or for district heating.

Worldwide coal power generation meanwhile increased by over 3% in 2017, enabling coal to retain its share of the global power mix at 38% after several years of decline.

A 600-MW coal-fired plant may require 1.5mn mt/yr of coal for its decades-long life to come, the IEA notes, providing coal’s critics with a further argument against new investment.

The report notes that an international group, led by Canada and the UK called Powering Past Coal includes no big coal user/producer nations. As such, the IEA sees its best means of reducing emissions will be as an advocate of carbon capture, use and storage (CCUS).

"Tackling our long-term climate goals, addressing the urgent health impacts of air pollution and ensuring that more people around the world have access to energy will require an approach that marries strong policies with innovative technologies," said IEA’s Sadamori.

The World Bank is also running a $200mn-plus programme to encourage developing countries in Asia to cut coal production and use, and in December launched a short report advising how mine closures can be prepared in advance in order to mitigate job losses. 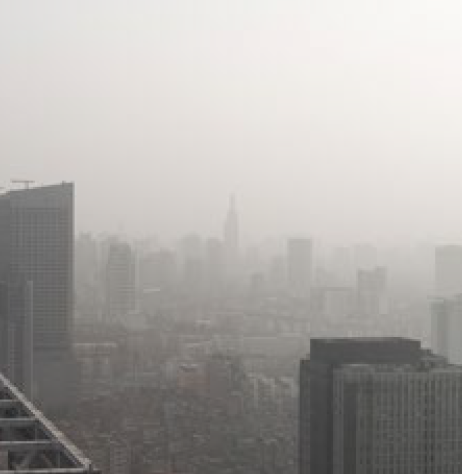 Global coal consumption is projected to remain stable over the forecast period, rising from 5,355mn mt of hard coal equivalent (mn mt ce) in 2017 to 5,418mn mtce in 2023.

A slight increase in coal-fired power generation is forecast to be offset by a shallow decline in non-power coal consumption. Thermal coal demand is expected to rise by 77mn mtce (0.3% per year)

China is on the verge of economic changes that would shift it away from energy-intensive manufacturing towards services aimed at serving its middle class, the IEA report notes. Coal-fired plants account for 70% of China’s installed power generation capacity, with hydro in second place at 20%. Developments in nuclear, wind and solar are impressive but remain nominally modest, it adds. As such, if Chinese power demand growth were to grow by 5%, significant extra coal-fired power capacity would be needed, the report adds, ascribing to gas little importance in terms of market share and growth in China.

The report foresees production stable in China to 2023, but growing 4%/yr in India, the US falling, but low-cost producers such as Russia and Australia increasing their output.

India is forecast to witness the biggest absolute increase in coal demand out to 2023, rising by 146mn mt to 708 mn mt in 2023, with both power and non-power coal demand set to rise substantially in the next six years.

Expansions are planned in coal-firing in the Middle East oil and gas heartlands such as in the UAE (2.4 GW), Oman (possibly 1.2 GW) and Egypt (8.6 GW) by 2023. But in Egypt, IEA no longer expects all (or any) to enter service by 2023, thanks to the 14.4 GW of modern gas-fired plants (CCGTs) opened in 2017-18 by Siemens for the country’s power ministry to absorb much of the new gas production from the newly developed giant Zohr field and West Delta Marine phase 2. Morocco in contrast is due to open a 1.4-GW coal-fired plant in 2019.

Drilling down into the details

NGW: What technical advice is the IEA providing to high-coal countries to reduce their use, as the World Bank has done regarding phasing out coal?
IEA: Unfortunately, there is no silver bullet or magic solution that can be applied universally. Each country has different characteristics and different circumstances making it unique: governance, domestic endowment, interconnections, historical legacy, and so on. That said, there are some no-brainers that the IEA can recommend anywhere: energy efficiency, some renewables in favourable circumstances and so on.

NGW: The report says gas is of little importance in terms of both share and growth in China. How confident are you that gas will not grow beyond about 3% of the total power mix, given the success in expanding gas in cities?
IEA: It will grow in the future, this is for sure, but the growth of gas is too negligible to curtail coal generation. Coal generation in China is in the order of 4500 TWh, while gas is in the order of 200 TWh. Moreover, 580 GW of coal power plants in China have been retrofitted to meet the so-called ultra-low emission standards (the same for natural gas plants). But gas will be used massively to replace coal outside the power sector, in the residential and industrial sectors (except for the heavy industry). In these sectors (residential and small industrial), where coal use is really pollutant, the advantages of gas with regard to air quality are undisputable and therefore, this will be the priority for coal-to-gas switch.

NGW: Pakistan in particular has seen strong growth in LNG imports. So is the 1.32-GW Port Qasim coal-plant being fully used and will all the other 7 GW or so of coal capacity be completed by 2023 or is there scope for some to be deferred?
IEA: The energy needs in Pakistan are huge. Pakistan, with 200mn people, consumes as much electricity as Netherlands. Therefore, the increase in LNG exports and coal developments are not contradictory, especially if you consider that as recently as 2016 oil was still the largest source of electricity, which does not make any sense in a country like Pakistan. Regarding the construction of the plants, all of them --except Jamshoro -- are under the umbrella of the China Pakistan Economic Corridor, which has quite a good record of building things as scheduled.

NGW: Could there be slippage too among some of 10.1 GW supercritical coal-fired plants due online in Indonesia by 2023?
IEA. Sure. There are 7 GW of new super-critical coal-fired plants planned to commission in 2019-2020, and I do not expect all of them coming on line in that period. That said, there are other plants under development not included in the table. A major expansion of the coal fleet in Indonesia is a matter of fact.

NGW: Also will the 8.2 GW coal-fired complexes in Egypt now be built, given the country's gas being produced from the giant Zohr and phase 2-West Delta Marine gas fields -- and recent commercial start-up of 14.4 GW of Siemens-built CCGTs?
IEA. The Coal 2018 report forecast coal demand until 2023, so in the case of Egypt, the easy answer is that we do not expect any coal power plant running by 2023. But I will try to answer your question anyway. If you follow how the plans for coal power in Egypt have developed in the last three years or so, it was something urgent and huge (at some point there were plans to build more than 16 GW by 2022). Since then, gas discoveries have allowed deferrals and the focus to switch from from energy shortage to energy diversification. In short, I think we will see coal power plants developed in Egypt, but to be commissioned in the 2023-2027 period, and indeed, on a smaller scale than the famous 16 GW.

Giant Dutch Gasfield 'Will not be Turned back on': Minister