One of the basic ideas in economics is that you tend to get the best results if people or firms that take decisions have to take account of all the benefits and costs. Climate change and pollution perhaps represent the two most evident examples of situations where that may not happen. Emitters and polluters have no incentive to consider the impact of their emissions and pollution for society as a whole. It is what economics textbooks call an ‘externality’: the adverse effects of greenhouse gas emissions or pollution are ‘external’ to the market, which means there is usually only an ethical – rather than an economic – incentive for firms and consumers to reduce their emissions. That is, when free markets do not maximise society’s welfare, they are said to ‘fail’ and policy intervention may be needed to correct them or, more precisely, to internalise them. The most common way governments and institutions do so is to impose a tax on the producers of a negative externality. This is could be done to encourage a polluter to reduce their emissions. It is interesting to note that this principle is 100-year-old, as Arthur Cecil Pigou – an economist of the University of Cambridge – first introduced the concept of externalities and the idea of correcting them with a tax in 1920.

As the EU develops its European Green Deal, it is important to evaluate whether European countries are successfully internalising the climate externality, or not. To do so, it is crucial to analyse how fossil fuels are currently subsidised. Combustion of fossil fuels is the main cause of climate change, and phasing-out fossil fuels is the primary solution. Consequently, the main climate policy is to ensure that fossil fuels do not get direct or indirect support from governments.

Fossil fuel subsidies can be measured in two different ways. The first is a narrow measure, termed pre-tax subsidies, which simply reflects differences between the amount consumers actually pay for fuel use and the corresponding cost of supplying the fuel. The second is a broader measure, termed post-tax subsidies, which reflects differences between actual consumer fuel prices and how much consumers would pay if prices fully reflected supply costs plus the taxes needed to reflect environmental costs and revenue requirements. 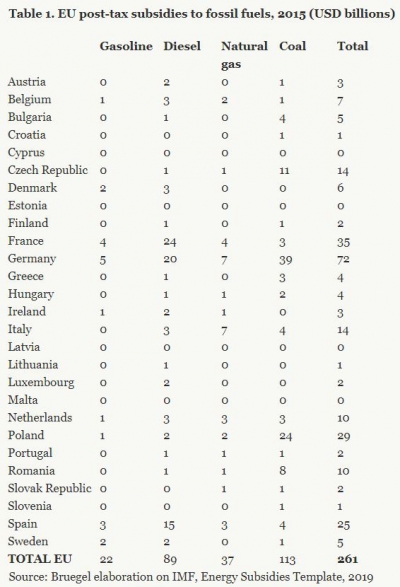 While the international debate tends to focus on the first measure of subsidies, it seems more sensible to focus on the second, broader, measure as this is the only way to unveil the eventual ‘hidden subsidies’ given to fossil fuels simply by not properly internalising (i.e., taxing) their environmental costs including climate change, local air pollution traffic congestion and traffic accidents.

The most accurate estimation of global post-tax subsidies is provided by the International Monetary Fund. According to that, EU post-tax subsidies stood at $261 billion in 2015 – with the top-4 subsidisers being Germany ($72 billion), France ($35 billion), Poland ($29 billion) and Spain ($25 billion) (Table 1).

In the context of the European Green Deal, President von der Leyen proposed a Sustainable Investment Plan to mobilise a “green investment wave” of € 1 trillion over ten years. To put things into perspective, the cumulative amount of current € post-tax subsidies projected over ten years goes well beyond € 2 trillion.

This implies that in the context of the European Green Deal, it will be of paramount importance to push for the full internalisation of fossil fuels’ environmental externalities. Hence, Europe’s current carbon pricing system needs to be substantially scaled up.

Today, only half of European emissions are priced, and carbon prices remain too low to drive significant behavioural changes. So, it is clear that carbon prices should go wider and higher. A meaningful carbon price should be established for all sectors, by reforming and strengthening the EU emissions trading system (ETS) and by pushing EU countries to increase the price for emissions not covered by the ETS through a reform of the Energy Taxation Directive.

These two policy actions should be prioritised in the context of the European Green Deal, as they are the only ones that could contribute to the elimination of the ‘hidden subsidies’ Europe still grants every year to fossil fuels. This is the first real step that should be taken to seriously pursue the 2050 climate neutrality path.

China and the Oil Price War: A Mixed Blessing [GGP]