Spain’s capacity market – which would allow power generators to bid for subsidy contracts in auctions – passed a major hurdle in July after the nation’s competition authority CNMC said the draft rules presented by the Ministry of Ecological Transition and Demographic Challenge (MITECO) were broadly compatible with the EU’s Regulation 2019/943. This suggests that the scheme stands a good chance of being approved by Brussels, which is necessary before auctions can begin. CNMC suggested some amendments though, such as allowing for cross-border participation which would permit French and Portuguese power generators to bid for contracts.

“The project should include cross-border participation among the general principles of the capacity mechanism,” CNMC said in a statement. It added that the ministry should carry out a proper evaluation of the security of supply situation in Spain and Europe “which is necessary before launching the [capacity mechanism]” according to EU rules.

The capacity market – or Capacity Remuneration Mechanism – is designed to shore up security of supply by paying generators for making capacity available when supply from renewables falls short and the electricity system is under stress. The capacity payment comes on top of revenues generators earn from selling their output in the wholesale market. Generators will be able to bid for capacity payment contracts in auctions, although no timeline for the auctions has been made official yet.

According to the draft rules, the auction system is open to existing and new plants, storage facilities and demand-side management. However, coal-fired power plants will not be allowed to participate in auctions and CCGT plants operating for more than 1,000 hours/year would also be excluded, according to the draft. Moreover, new plants participating are subject to a zero-emissions limit which would exclude new CCGTs, unless they are built with carbon capture technologies.

These requirements go beyond the provisions under the aforementioned EU regulation which says power plants emitting more than 550 grams/kWh or more than 350 kg/kW/year of CO2 emissions on average must be excluded from capacity auctions from July 2025. In practice, the EU regulation allows virtually all CCGTs as well as coal-fired plants running for no more than 400 hours/year to participate in auctions beyond 2025.

To this end, CNMC noted that a less restrictive regime for fossil fuel plants would be compatible with the EU regulation. Moreover, several stakeholders, including EFET, have called for the ministry to adopt a framework for coal and gas-fired plants that better matches the EU guidelines.

Coal squeezed out, gas next?

Coal is being squeezed out of Spain’s power mix and the country’s last plants are expected to close in the coming years and most likely before the Spanish government’s official phase-out deadline in 2030. This is due to a combination of factors including rocketing prices for EU carbon allowances, which are currently trading above €60/metric ton, as well as expensive retrofitting requirements under the EU’s Industrial Emissions Directive. Installed coal-fired power generation capacity in Spain is currently less than 5 GW, while it was 9.7 GW by the end of 2019, according to REE data. From January to August 2021 (Figure 1), coal had a share of just 1.6% in Spain’s electricity generation mix while CCGTs had a share of just under 14%. Renewables accounted for almost 50%. Spanish utility Endesa, for example, has pushed forward the phase-out target for its coal-fired plants, which total 2.5 GW of capacity, from 2030 to 2027. It is worth noting that, at the site of the As Pontes coal-fired plant in Galicia, which is being dismantled, the company has plans for a green hydrogen project equipped with a 100-MW electrolyser and six wind farms totalling 611 MW. 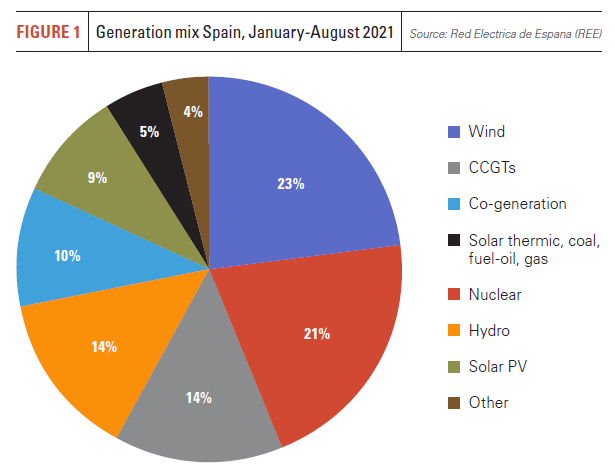 Nevertheless, gas-fired power plants will be needed for many years to come to support intermittent supply from solar and wind in Spain’s electricity mix. But rocketing gas prices expose gas-fired CCGTs to a squeeze on profit margins and further illustrate those assets’ vulnerability to fluctuating energy prices. Market observers therefore argue that capacity payments are needed for those plants to stay online. According to the draft capacity market rules, however, existing plants can only apply for capacity contracts with a duration of one year, while new plants, excluding CCGTs, can bid for five-year contracts.

“The new capacity market represents a lifeline for Spanish CCGTs which have struggled to cover fixed costs over the last 3 – 5 years. Incentivising existing CCGTs to remain open is likely to be the cheapest source of capacity in the near term,” Timera Energy said in a recent report.

However, Timera Energy noted that generation margins of CCGTs are set to fall in the 2020s with increasing renewable penetration putting a lid on wholesale electricity prices due to their absence of fuel costs. Moreover, as Spain’s CCGTs reach 20-25 years in age, units typically require major maintenance capex investment to remain operational, the report added.

“All of these factors are set to see the competitiveness of CCGTs decline over time, with the capacity market delivering new, flexible assets as CCGTs close,” the report said.

Pilar Auguets, senior director and head of Iberian utilities at Fitch Ratings, notes that the Spanish auctions are “pay as you bid” so, if awarded, the capacity contract should cover at least the plant's marginal cost, thus making those CCGTs sufficiently profitable to avoid closures.
“Currently CCGTs have low load factors and there is overcapacity, so there is lots of interest to capture revenues from the capacity mechanism in order to be able to cover operating costs and depreciation charges,” Auguets tells NGW.

Spain’s nuclear power plants, which total around 7 GW of capacity, will also be able to bid for capacity contracts. Nuclear generation will support variable supply from wind and solar but they provide baseload power and cannot compete with CCGTs when it comes to flexibility and rapid start-up times.

Spain is not the only EU country which is betting on capacity payments to keep the lights on. The European Commission approved Belgium’s capacity market in August this year after launching an in-depth investigation in August 2020 over the possible breach of EU state aid and competition rules. Belgium plans to close its last nuclear reactors in 2025, the Tihange and Doel plants respectively. This is a major manoeuvre as nuclear power provides around 40-50% of electricity supply in Belgium. The capacity market is designed to shore up investment in new generation capacity, including CCGTs. Generators can bid for contracts with a duration of up to 15 years and the market is open to cross-border cooperation.

France, Italy, Poland, Ireland (jointly with Northern Ireland) and the UK also have capacity markets in operation. These support mechanisms are not without controversy, however, as some see them as indirect subsidies to keep unprofitable fossil plants on the grid. Great Britain’s capacity market is a case in point. The scheme was approved by the EC in 2014 when the UK was still an EU member. However, this decision was challenged by Tempus Energy before the European Court of Justice’s General Court. The General Court ruled in 2018 that the EC had not carried out an adequate analysis of the GB capacity market before approving it and that the commission should reassess it. GB capacity auctions were subsequently suspended while the EC carried out an in-depth investigation. The EC ultimately cleared the system for a second time and auctions resumed and with backdated payments. In an ultimate twist, the ECJ ruled in September this year that the General Court’s decision from 2018 was wrong.

The Sniffers makes methane its mission