The privately-owned producer ONE-Dyas has emerged from the pandemic with prospects for growth in North Sea oil and gas production restored after a few years’ stagnation. Prices have now come “back to normal,” CEO Chris de Ruyter van Steveninck, a reservoir engineer, told NGW. “Now is the time to look at the options the company has for the future.”

“Where we stand today, we have a very mature and diversified portfolio of exploration and development potential, which makes it an interesting time to look at the options,” he said.

It is not the only company in this position: Abu Dhabi state energy firm Taqa is also mulling a sale of its oil and gas assets, although the purpose of that sale is to focus on renewable energy. Taqa and ONE-Dyas are partners in some Dutch projects and de Ruyter van Steveninck did not rule out a possible purchase of some of its assets.

The Netherlands is where the company produces about a fifth of its oil and gas and the Dutch Small Fields Policy, which was initiated decades ago to ensure that the Shell-Exxon operated Groningen field did not monopolise the domestic market, is still going strong. Indeed, that same operating company NAM is also developing small fields.

While the policy is focused on the economy and self-sufficiency of the Netherlands, there are still hurdles for producers to overcome. “The government does not give development permits overnight: companies have to satisfy environmental concerns and that is right. The operator needs to show that the field for which a permit is sought can be developed with no material impact on the environment,” he said. But there are some sweeteners: “There are tax incentives... the Netherlands is of the opinion that in the decades to come we will need oil and gas and the closer we are to where we produce it, the better for everyone,” he said. 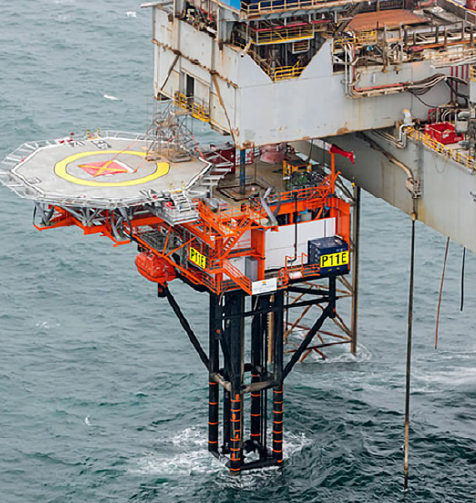 This means the need for greater use of electrification. So the GEMS licence (which contains what was formerly known as Ruby and now N05-A), for which a draft permit was issued in April and a full licence is hoped for early next year, will be the first processing platform to inject dry gas into the Dutch network that runs on renewable energy, being hooked up to an offshore windfarm. The drilling, the processing and the compression will all be electric, making it a Dutch ‘first’.

“This is what we are aiming for,” he said. “We have drilled one exploration well. We will aim to produce with zero emissions everything we do from today; then everything operational will be net zero by 2030; and we will be net zero completely by 2035.”

Another operated field, P11, is relatively small and used to send its gas for processing by another platform. Mulling the options, and finding it too small for carbon capture and storage (CCS), the company has abandoned the wells but will reuse the platform elsewhere. “It was designed to operate at different water depths with a small amount of adjustment. At this point we imagine it will be put to use in the Dutch North Sea,” he said.

A big acquisition in the UK was the 50% Sean area stake bought from another Shell-Exxon company, Shell Expro, in 2015, giving ONE-Dyas the operatorship. The field was one of the first in the UK southern basin but was no longer material for a company of Shell’s size.

“We have invested quite heavily in the field and it is still producing and doing well and we believe we can run it until 2024. We have added compression to extract more molecules. We have not found yet any concrete CCS opportunities for Sean but we are looking to see if that might change, and that applies to all our assets: looking if CCS can play a role,” he said. There are a number of CCS projects in the Netherlands based around industrial clusters, where the CO2 is to be injected offshore.

Another ONE-Dyas well, Turkoois, 10 km north of the earlier N05-A well, has been very successful and demonstrates that there are still ample opportunities in the Dutch North Sea. It could add another 10bn m³, and with all the prospectivity in the area there could be 50bn m³ gross reserves.

And in the winter, its F6 well found another potentially interesting 50-150mn barrels of oil, subject to further appraisal. “This demonstrates that if we do it right, if we manage the way we operate with low emissions there are great opportunities in the North Sea,” he said.

De Ruyter van Steveninck views the UK transition deal with approval and expects the Dutch government to work on something similar with Dutch producers. “The pressure on the operators to look at electrification makes sense. Government and industry need to work hard to lower emissions while producing. I like the UK transition deal: the co-operation models are there. We want to work hard to get that done in the Netherlands too.

“We need this oil and gas in the energy transition and we might as well have control over oil and gas. People often forget that North Sea regulation is much stricter than in other countries: the importance of cutting methane leaks is at the top of the agenda here but not elsewhere. Importing everything – steel, oil and gas – from all over the world is not the way to go, in my view.”

As a privately owned company ONE-Dyas is not held to account for its business, which CEO Chris de Ruyter van Steveninck says is highly entrepreneurial. Its assets are a mix of oil and gas, weighted 55-45 in favour of liquids for reserves and 60-40 in favour of liquids in terms of production, with a focus on low-carbon-intensity reserves in the North Sea, specifically the southern basin. A number of other small companies have set their sights on this area too.

About 70% of its production now is in the UK, 20% in the Netherlands and 10% in Gabon, but this is a moving target and will change when Norway comes on stream.

The company manages its capital in a careful way and puts dividends and profits ahead of growth for its own sake, de Ruyter van Steveninck said. “Sometimes saying no is also adding value,” he said, referring to the decision not to invest further in Shell’s Jackdaw field in the UK: a legacy from the BG days, the field did not promise the returns ONE-Dyas was looking for.

No one asset has a major impact on the portfolio, which he describes as ‘mature’ in the sense of diversified rather than ‘old’. The company also has a stake in oil production off Gabon. This is not a growth area but it is a well-managed, profitable asset, he said.

With the projects now in hand, he expects production to recover towards the pre-merger level of 35,000 boe/d and even a little higher in 2023. The company owns stakes in five of the ten biggest UK licences.

The equity gas is sold to a number of companies on a field-by-field basis. GasTerra is still the key offtaker in the Netherlands but once it ceases to exist at the end of 2024, there will still be strong appetite for offtake, including at the Dutch hub, the Title Transfer Facility.

About half of its gas is sold spot and the rest is sold forward, not at a fixed price but with a cap and collar, and only for a year or two ahead. “We have a hedging policy in line with standards for the reserves-based lending market,” he said.