As Azerbaijan’s oil export revenues have been declining, the country has stared several significant projects to compensate, including boosting gas exports and its trading activities as well as taking a bigger share of development of projects.

In 2010 Azerbaijan’s oil production volume was above 50.8mn metric tons at an average production cost of $2/barrel, but the volume had fallen to 38.7mn mt by 2018 and the cost tripled to $6/barrel, as the Azeri-Chiragh-Guneshli (ACG) and other oil fields entered their middle age.

Socar’s revenues have gone up despite oil export and price fall. 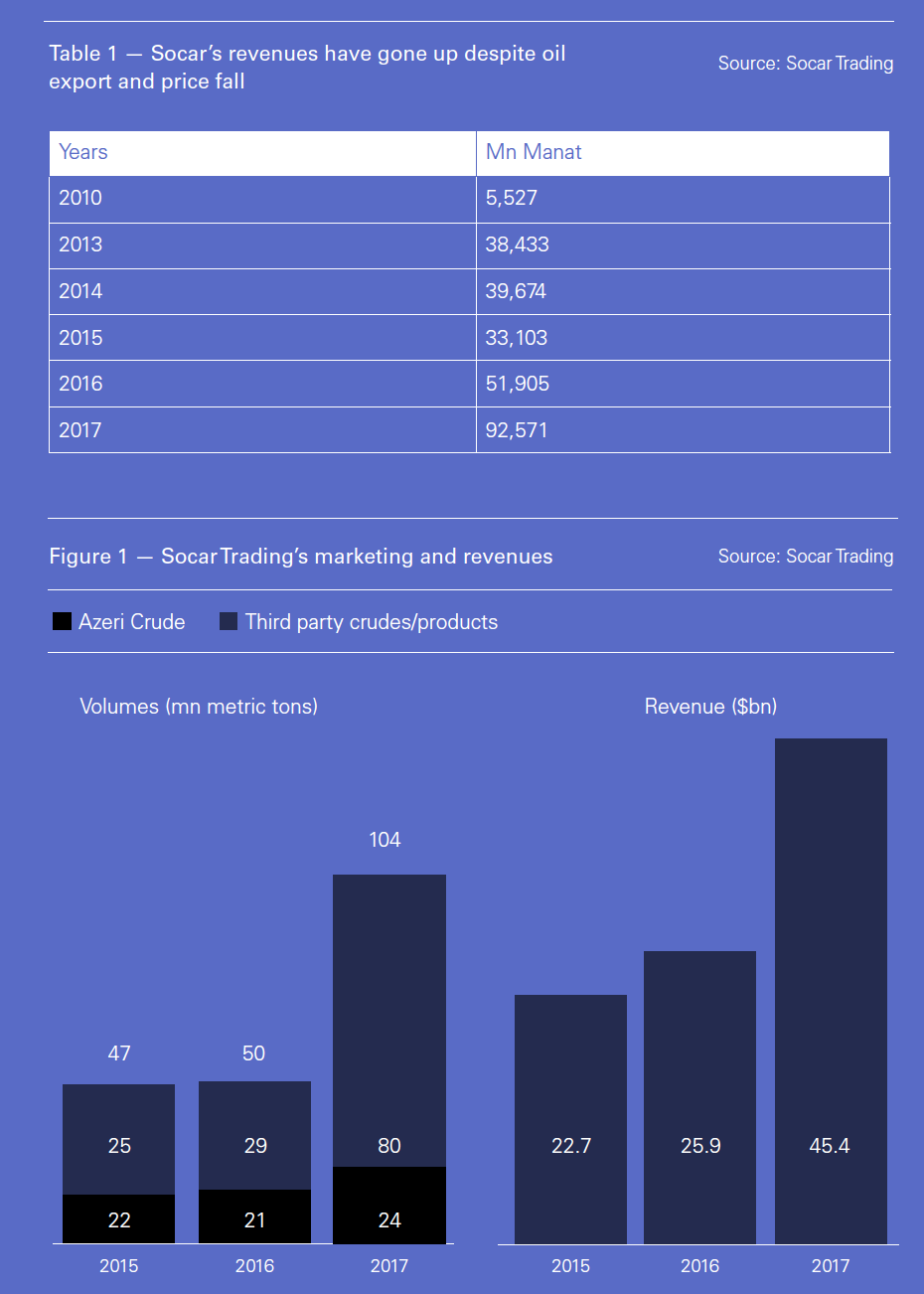 Socar’s revenues from activities in Switzerland in 2017 amounted to manat 78.6bn, which is 84.9% of the company's total revenues. There is not updated statistics for 2018. Socar controls Socar Trading, active on both Azeri and foreign markets.

The other important step is the nationalisation of the oil and gas industry and Socar’s participation as contractor in projects.

Socar vice-president for strategic development Tofig Gahramanov told NGW that since 2014, when oil prices plunged, Azerbaijan began to compensate for lower revenues by actively participating in the construction of projects. “Now, about a half of all the work done in oil and gas projects is being carried out by domestic companies as subcontractor or joint operator,” he said.

The latest step taken in this direction was the creation of a joint venture, called Turan, between state-run Socar’s drilling subsidiary AQS and British-German KCA Deutag on a 50/50 basis. It was to carry out the drilling in the giant BP-led Azeri-Chirag-Gunashli (ACG) complex as well as Shah Deniz stage 1. Together these account for about four-fifths of the country’s oil and gas production.

BP also operates Shah Deniz stage 2, of which all 24 wells were drilled by another Socar subsidiary, Caspian Drilling Co (CDC).

ACG shareholders decided in September 2017 to expand the block, investing a further $40bn by 2049. The partners approved first $6bn investment package on April 18, 2019. Socar told NGW that the investment package covers 3Q 2019-1Q 2023 and includes $2.6bn in drilling and subsea equipment as well as $3.4bn on constructing a platform.

BP told NGW that this year it will drill 14 wells in ACG and 4 wells in Shah Deniz.

Socar also said that based on the nationalisation plan and the 2017 contract, the platform must be built totally inside the country by Turkish Tekfen and Azeri Azfen on a 50-50 basis,” Socar added.

Socar’s subsidiary Azfen’s gross profit increased from manat 67.3mn in 2015 to above manat 243mn ($143mn) in 2017 from construction projects. Last year’s results have not been published yet.

The company has awarded $2.5bn worth contracts on expansion of South Caucasus pipeline, a part of Southern Gas Corridor, from the Caspian Sea to the border with Turkey.

Another project is the offshore Absheron gas field, with some 350bn m3 reserves, which is to be developed by a joint venture of Socar and French Total, again 50-50. The first well -- drilled by CDC – to produce 1.7bn m3/yr gas and 0.7mn mt gas condensate – was 90% complete last month at 6,200 m depth. Production is due to start in 2021. This is the first major offshore project in which Socar is participating as joint operator.

CDC, which has drilled 114 wells since 1997 in Azeri projects, signed a contract with Norway’s Equinor on March 13, 2019 for the drilling of the Karabakh field.

Socar and Equinor signed a production-sharing agreement May 31, 2018 for the exploration and development of the Dan Ulduzu-Ashrafi-Aypara block as well as a risk service contract for the development of the Karabakh field. Socar and Equinor created a 50-50 operating company for that purpose. The Karabakh field holds an estimated recoverable 28bn m3 of gas and is 130 km east of Baku in sea depth of 180 metres.

Beside Turan, CDC and Azfen, Socar controls 45 further subsidiaries that are engaged in construction and project development issues.

For example, Socar AQS completed its first well in Bangladesh in January 2019. Based on its 2018 contract, it has to drill four wells in the country’s Semutang South-1, Begumganj-4, Madarganj-1 and Shariatpur fields. The company has also participated in a drilling tender, issued by Ukraine, in Kharkiv province recently.