The IEA projects that hydrogen will command a 7% share of the global energy mix by 2050, whereas BP expects it to occupy a 15% share and Bloomberg New Energy Finance as much as a 24% share. These are all respected sources, but with widely different views on the potential of hydrogen in our energy future.

Which is the most realistic? BNEF’s projection was published in March 2020. BP’s and the IEA’s scenarios both in September 2020. The timing may be relevant. There are signs that analysts are having second thoughts about the potential of hydrogen, certainly when it comes to transport, but also with regard to its possible role in home heating and electricity supply. Hydrogen seems a better bet in industrial heating and heavy-duty transport. 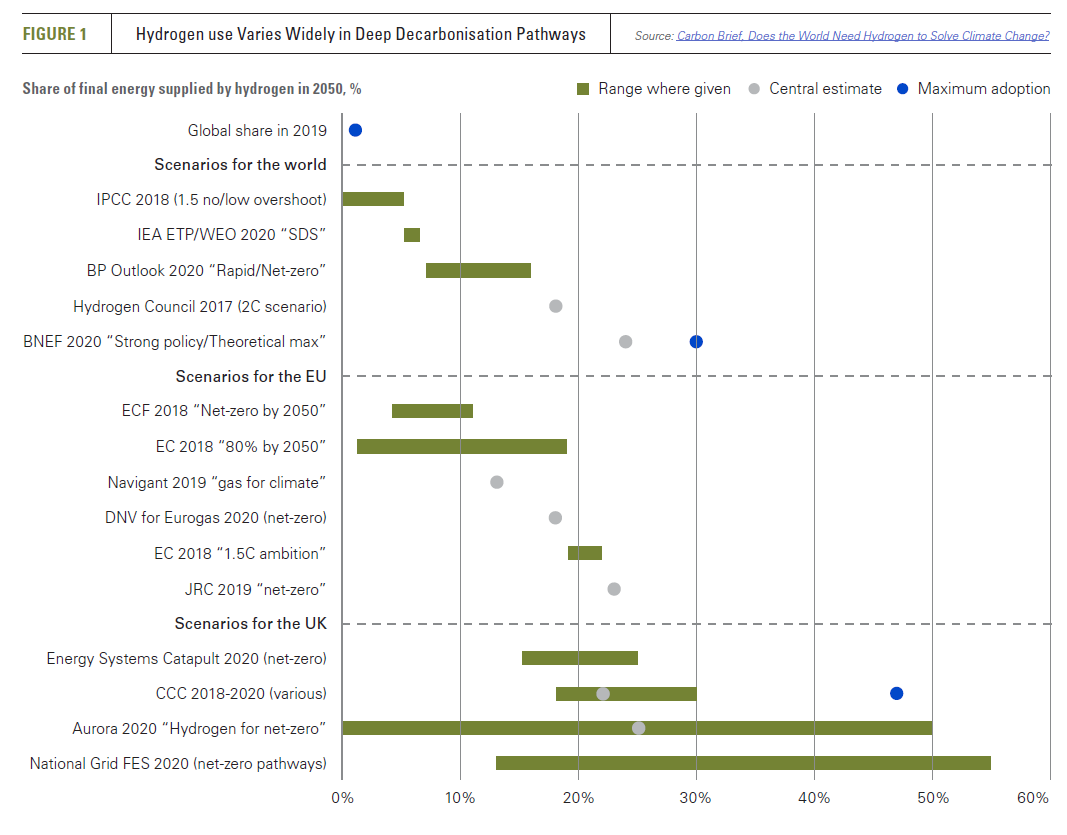 Energy expert and former European Commission official Samuel Furfari went as far as to call “green hydrogen”, based on renewable energy, an “illusion” in an interview with NGW in February. “The process is totally inefficient and therefore will not have any industrial application without continuous subsidies,” he said. He pointed out that “we have gone down this road before”, several times, and each time it turns out to be a “dead end”.

The consultants of Rystad Energy published a report on March 31, 2020 predicting enormous growth for batteries, concluding that for hydrogen to succeed, “batteries must fail.” Rystad examined three storage solutions for an energy system dominated by wind and solar: carbon capture and storage (CCS), hydrogen and batteries. It concluded that battery technology is the most powerful of the three.

Hydrogen could have an important role, but then it would need to be used in areas where batteries currently have a big edge, such as EVs and electricity grid support. This is not very likely to happen, according to the report. If batteries succeed in living up to their promise, Rystad finds hydrogen will be a fairly niche product used mainly in areas like steelmaking, shipping and long-haul aviation.

Like Furfari, the Rystad consultants note that the process of producing hydrogen from renewable energy is highly inefficient. In a world where renewable energy capacity was massively overbuilt, this inefficiency would not matter much. But that is not the world we live in.

Energy consultancy Lucid Catalyst drove home the same point in a report that came out last year, Missing Link to a Livable Climate. This notes that “to achieve the lowest cost renewable-hydrogen, it is possible to co-locate wind and solar projects, in the best combined wind and solar resources, to deliver high capacity factors and hydrogen at around $2/kg within the 2030 timeframe. However, most of these locations are remote from populations and markets. Adding distribution costs from remote locations, for example, Australia to Japan, increases costs from $2/kg to $3.3/kg. This raises the cost beyond the threshold of economic competitiveness ($0.90/kg).”

But irrespective of costs, it is simply “not realistic to expect renewables to be able to produce hydrogen in large quantities at the same time as decarbonising grid electricity in most advanced economies because of sheer physical space constraints,” noted Lucid.

Lucid presented the following calculation: “Even assuming a relatively high solar capacity factor for entirely hot desert installation (25%), PV farms equivalent to the entire installed capacity of Germany in 2020 (50 GW) would need to be installed globally every 10 days from now until 2050 for solar hydrogen to cover world projected demand. If hydrogen were to be entirely supplied with offshore wind, for example (and accounting for wind’s capacity factors), an amount roughly equivalent to the UK’s entire current offshore wind fleet (9 GW) would have to be built every three and a half days around the world right away until 2050.”

Other independent analysts have put forward similar arguments. After having listened to two company presentations on green hydrogen projects, Australian energy expert David Leitch concluded that “it’s clear that the role for hydrogen in a decarbonised economy is for industrial heat, potentially steel and cement making and potentially to have some role in power generation.” He observed that for export projects to succeed – e.g. from Australia to Japan – taxpayers will have to come to the rescue.

“It fits many business models”

Tom Baxter, Honorary Senior Lecturer in Chemical Engineering at the University of Aberdeen, has made the same point in various articles written for The Conversation. In a recent piece, Why hydrogen energy has seduced a generation of politicians, he notes that hydrogen “is not energy efficient: for every three units of energy provided by hydrogen you have to put one unit of energy in”. 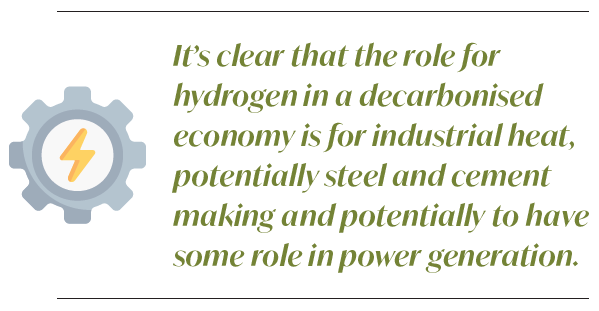 The reason for the popularity of hydrogen, according to Baxter, is that it “fits many business models. Fossil companies like it because it will be derived from fossil fuels for the next decade or more. Gas grid operators and gas boiler manufacturers see hydrogen as their only survival route as fossil fuel burning is being phased out. And the power utility companies also like it as they’ll be able to sell more power thanks to hydrogen inefficiencies.”

One of the most ambitious countries when it comes to green hydrogen is Germany. But there are serious questions as to whether Germany will be able to deliver on these ambitions. The German Court of Auditors recently sounded the alarm about the mounting costs of the country’s Energiewende (see box).

The German government, after having phased out its nuclear power capacity, has now also decided to do away with its coal fired power stations. This puts enormous demands on wind and solar power, which would have to deliver even more energy if they are partially converted to hydrogen, notes the Court. It finds the assumptions of the government about the expansion of renewable energy to be “unrealistic”.

“The Battery Society relies on itself”

The Lucid report makes the case for nuclear power as a source of hydrogen. However, the solid oxide electrolysis cells (SOECs) required to make electrolytic hydrogen using nuclear heat are far more expensive than other varieties, the IEA notes in its hydrogen report, putting their cost at up to $5,600/kWh today, around three to five times higher than other electrolysers. The IEA also points out that SOECs are the “least developed electrolysis technology” and are yet to be commercialised.”Hydrogen can also be made from natural gas of course, and can be decarbonised to a large extent with the help of CCS. That changes the outlook, but leads to a discussion about this technology.

Perhaps the most important point is the one made by the consultants of Rystad Energy. “An important advantage of the Battery Society is the fact that battery manufacturers must only rely on themselves to ramp up battery supply and bring the Battery Society to fruition,” they write. “The CCS and Hydrogen Societies, on the other hand, are dependent on policy changes and cost developments in other parts of the value chain.”

From the Editor: The blue hydrogen option – is it climate friendly? [Gas in Transition]