Russia pushes Europe to the brink

Vladimir Putin kick-started the EU transition away from Russian gas. Since cutting or reducing gas supply to Bulgaria, Poland, Finland, the Netherlands and Denmark in April and May, the Kremlin has since mid-June exploited the saga of the Siemens turbine to make further reductions to European flows. After obeying political diktat, Gazprom then tries to defend its commercial interest. This is why it took one month for the company to declare force majeure on gas supplies to at least one major customer in Europe.  After Nord Stream 1 maintenance that took place between July 11 and 21, flows restarted at the same level as prior to the maintenance (40% of capacity), before being further reduced to 20% of capacity. If flows stay at the July 31 level, Russian exports will be further down this month. Russia is reducing flows until the pain becomes unbearable in Europe. 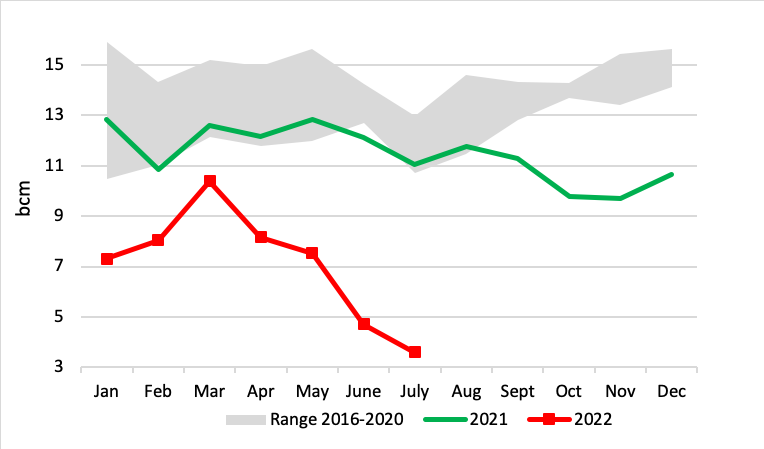 With a record low of only 3.6bn m3 of Russian gas sent in July (23% below the previous record low of June), the market's resilience is now being tested to the limit, as 30% (48bn m3/year or 4bn m3/month) of pre-crisis Russian exports are non-replaceable as Europe [1] has been too dependent on Russia. We are hence getting even closer to systemic risk, unless the EU manages to act in solidarity to avoid German industries to be the ones taking the full hit.

Nord Stream 1 maintenance lasted between July 11 and 21, reducing monthly flows by 61% versus June. After the June maintenance at TurkStream, flows via that pipeline were up 110% in July.

Split of Gazprom's monthly gas exports to Europe via route 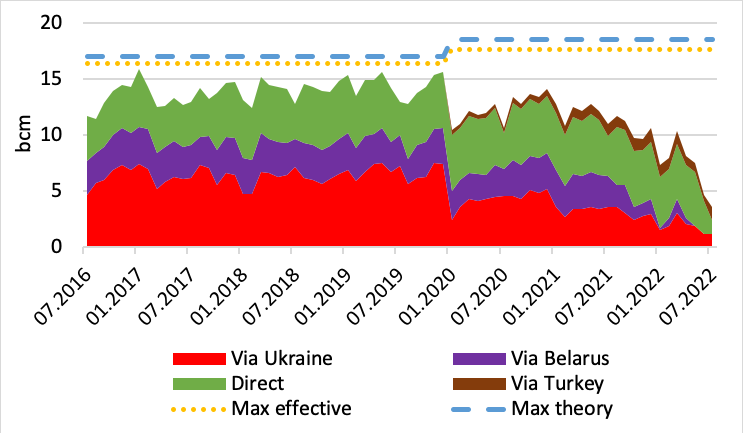 In July 2022, LNG send-out was 115% above last year and 92% above the historical mean. The system now has little upside flexibility to attract, if needed, additional cargoes. The UK has still some regasification capacity left but no one in Brussels bothered to ask Whitehall to fast-track a pressure increase at the BBL pipeline to maximise summer flows [2] from the UK to the continent. The limit where Russian pipe gas becomes non-replaceable is soon to be reached if Gazprom continues to reduce supply. 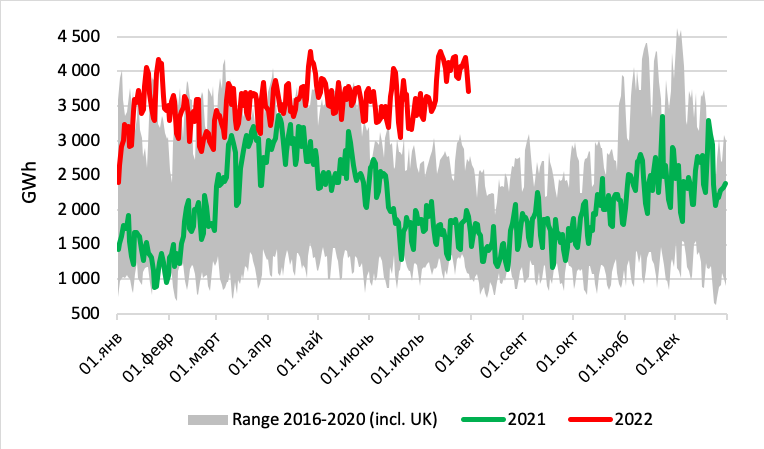 Even if at the end of July, EU storage was still below the five-year average (69% versus 73%), the recent trend shows that the market is trying to get storage up to 80% by October 1. But by further reducing its export flows, Russia is making this European strategy more and more difficult to achieve. 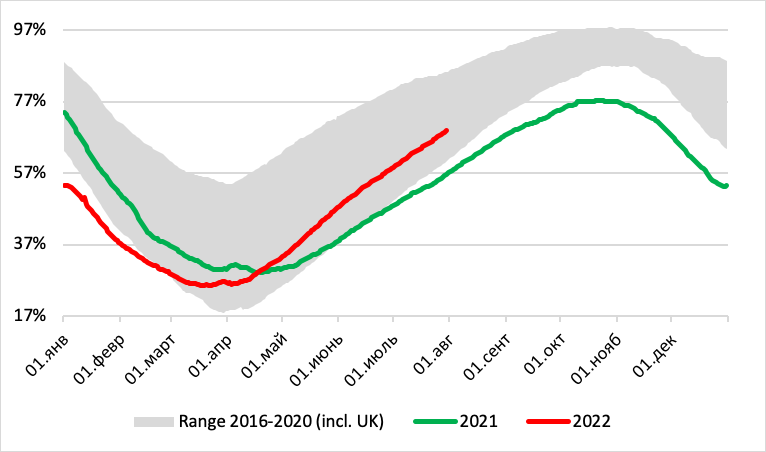 On July 21, the European Commission published its “Save Gas for a Safe Winter” plan. The plan set out how the EU can tackle potential further disruptions in gas supplies from Russia in a coordinated manner, with a mind to the upcoming two winter seasons. The plan proposed a voluntary gas demand reduction target of 15% at both the EU and each individual member state level. In addition, the plan is underpinned by a legislative proposal introducing a new EU emergency tool to address a potential gap between supply and demand in the European gas market. The proposed regulation introduced a process to declare an EU alert if voluntary demand-reduction targets are not sufficient to prevent a gap between supply and demand in the event of a full disruption in supply from Russia. Finally, “as the solidarity principle gives every member state the right to be supported by neighbouring member states under certain circumstances, member states who may ask for such support should also act in a spirit of solidarity when it comes to reducing their domestic gas demand." This prudent plan was intended for Germany, which is facing a systemic economical risk if Russian supplies are fully cut.

Unfortunately, on July 26, EU energy ministers agreed a watered-down version. Many countries are now either exempted (Cyprus, Ireland, Malta, Portugal and Spain), or could get a derogation (at least Poland and the Baltic States) or decided already not to apply it (Hungary). Vladimir Putin will watch with great attention which member state or states will apply for a derogation, to check how strong is EU unity.

[1] 4 bcm/month as explained in February 2022 in Gazprom gas flow at record low as energy crisis risks pushing EU into recession (naturalgasworld.com). This was a back-of the-envelope calculation and we shall see how in reality markets can cope with lower Russian pipe volumes.

[2] In winter as the UK has very little storage its export capacity to the Continent is limited.