Gazprom's gas flow to Europe slumped in January to a record low for the last seven years that data is available. Flow was down 39% year on year and down 23% versus the previous low, set in November last year. In its February 1 release [1], Gazprom confirmed it had reduced its exports "in full compliance with contractual obligations." 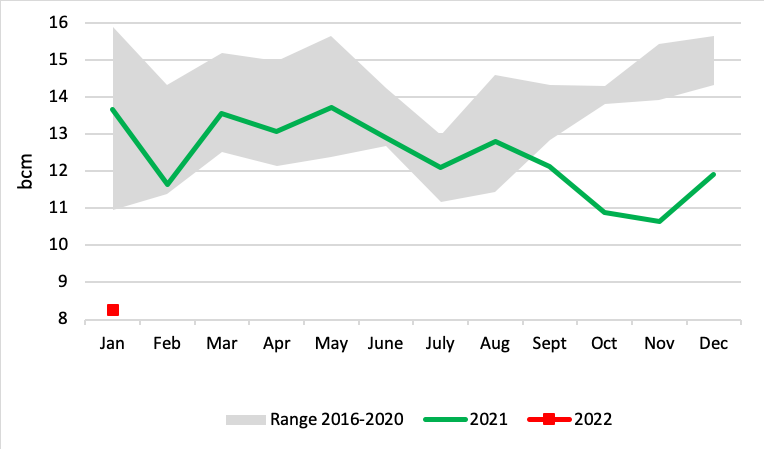 Gazprom could have delivered more gas in Q3 2021 but decided not to. It supplied its customers without refilling the storage sites it manages in Austria, Germany and the Netherlands.

The curtailment in exports in Q4 2021 could be explained by a lack of spare production capacity in Russia. There was also extremely high demand in Russia, and therefore we can deduce that the reduction in European supply was not because of a hidden political agenda.

In contrast, the substantial additional cut this month cannot be explained by any production constraints alone. A contributing factor may be Gazprom's decision to no longer sell volumes on its electronic sales platform (ESP), but volumes sold on that platform were very low in January 2020 anyway, reaching only 0.2bn m3. In January 2019, ESP volumes came to 3.5bn m3 [2].

Therefore, a deal with buyers to reduce flow must have been agreed in order to explain most of the decline this month. We should be asking European utilities why they are only requesting what could be considered the minimum contractual amount of gas. Were they told by Gazprom that this is all the gas they can get, or were they better on a warmer winter, or do they have a hidden agenda? Were they offered guarantees of Russian supply against the backdrop of increased tensions between Russia and Ukraine if they only requested this minimal amount?

Up-to-date market information is vital to answering these questions. But in the midst of Europe's worst ever energy crisis, it is telling that the only source of up-to-date data comes from Gazprom. Meanwhile, the European Commission has only just published its now-irrelevant data review [3] for Q3 2021, while European utilities have not disclosed any information.

Could this new record low represent the bare minimum amount of supply stipulated in Gazprom's long-term contracts with Gazprom? If so, we could estimate that all Gazprom's contracts amount to 124bn m3/year of supply, with a range of between 99 and 130bn m3/yr. Utilities might be quiet because either they are ordering the minimum amount, which could pose a PR risk, or are in negotiations with Gazprom to access the additional requested volumes.

Under their December 2019 transit deal, Gazprom has to pay Naftogaz to ship 40bn m3/year of volumes between 2021 and 2024 via Ukraine, regardless of how much it actually sends. After transiting the contracted amount in 2021, Gazprom is now transiting less than 50% of ship-or-pay volume. 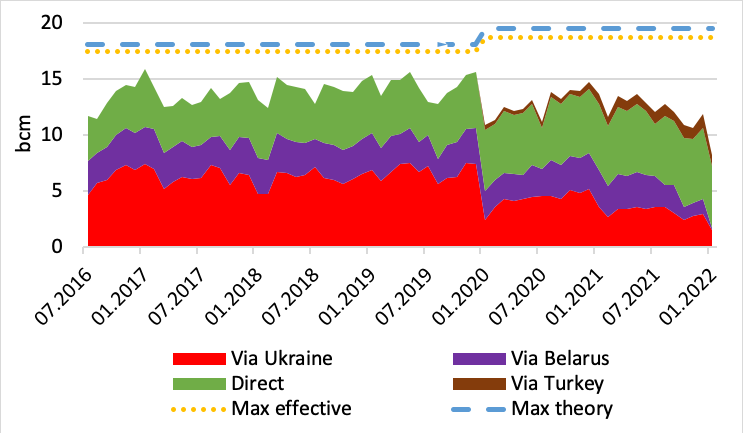 With data from ENTSOG, it is possible to split Gazprom's supplies sent via Nord Stream 1 and other direct routes in north Europe to Estonia, Finland and Latvia from its deliveries via other routes. This data demonstrates that Gazprom is maximising flow via direct routes, at the expense of deliveries via Ukraine and Belarus. 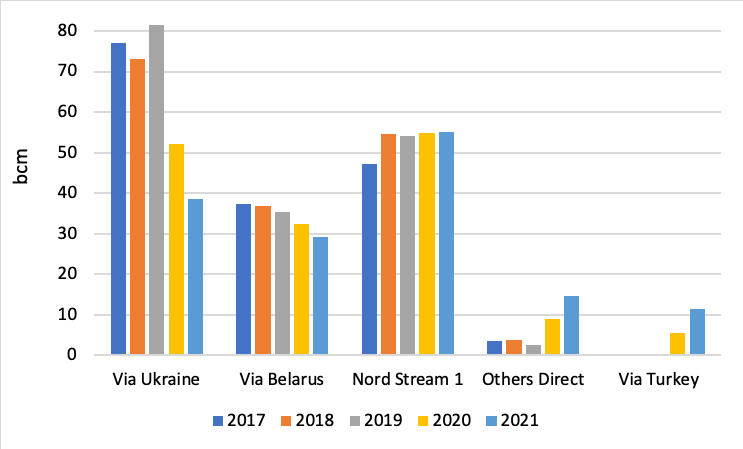 Gazprom's exports to Europe split by route in 2021 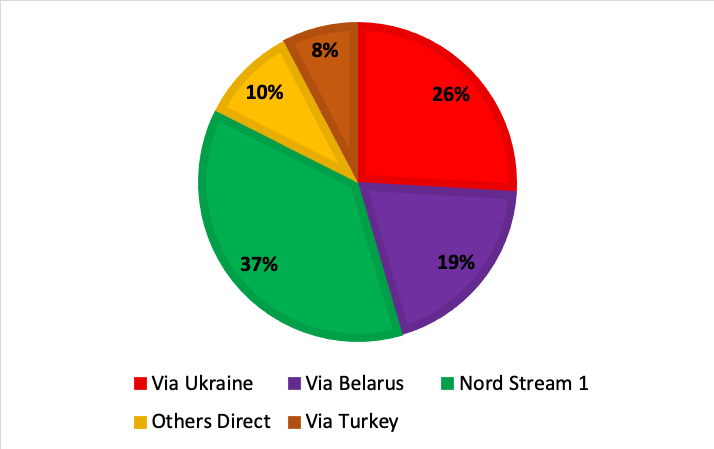 LNG send-outs were up 149% year on year in January, as record prices made Europe a more attractive destination than previously. Records were achieved [4] both in terms of daily send-out (January 25) and on a monthly basis. Supplies in January topped the previous record monthly amount sent in November 2019 by 4%. LNG send-out in January also surpassed Gazprom's deliveries to the EU for the first time ever. 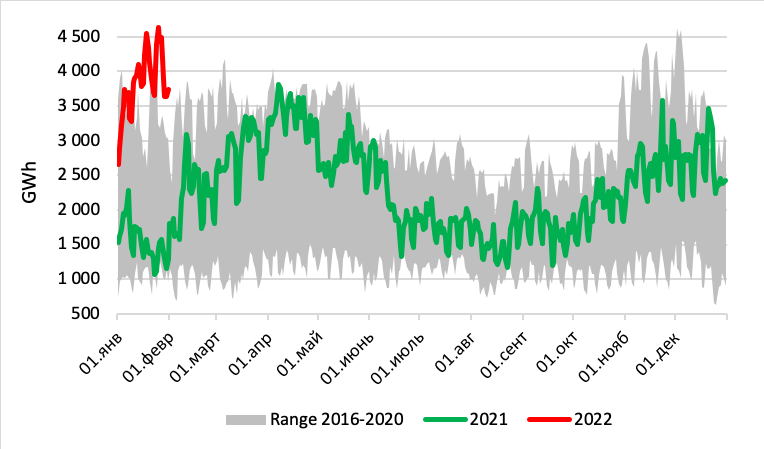 Europe's storage facilities began the withdrawal period in October last year at a worryingly low level of utilisation of 77%. By the start of 2022, this had fallen to 54%. But so far, the steep fall in Russian exports this year has been completely mitigated by extra LNG.

When Algeria stopped transiting its gas via Morocco in November last year, Spain lost 0.4bn m3/month of gas supply. Some spare capacity has since been used via the Medgaz pipeline, but Alger is now using it at near full capacity (0.9bn m3/month). With this rerouting of gas from Morocco to Medgaz, Spain is still 0.1bn m3/yr short of Algerian pipe gas. But this is almost irrelevant given the much bigger slump in Russian supply of (4bn m3/month).

Europe's gas storage facilities are now only 38% full, a level that is reached on average only by March 21. 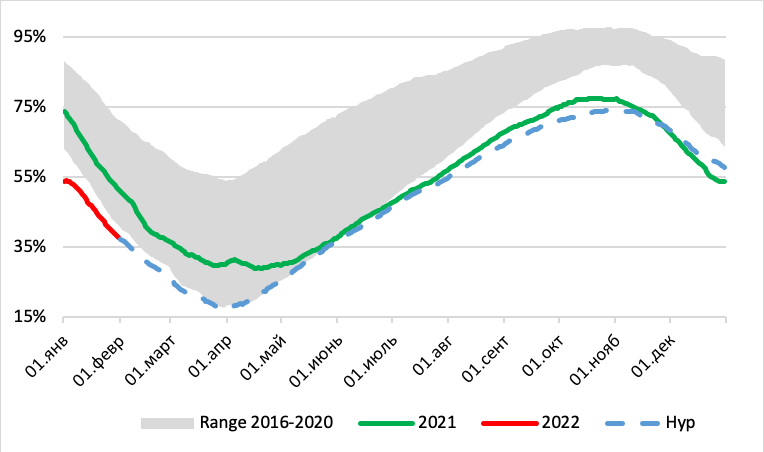 In 2012, I forecasted in my first book [5] that the surge in US oil and gas production, combined with the European energy transition would deeply alter the energy and geopolitical landscapes. Since 2020, the US and Russia have had the ultimate say on European gas prices by de facto collaboration or confrontation. After sleepwalking into this crisis, and since realising that Gazprom will not provide additional volumes, Europe has turned to the LNG spot market for the extra gas it needs. With this now the new norm, Europe could end winter with its storage facilities only 17% full, with 19bn m3 left in stock (including 4.5bn m3 of Italian strategic stocks). If we assume we could in theory end winter with no gas in storage, Gazprom could reduce its supplies by an additional 19bn m3 until the end of March, in the event of a military crisis, bringing them to de-facto zero.

On a more realistic basis, in case diplomacy fails, we could expect Gazprom to be willing to continue to exports via Nord Stream 1 and TurkStream as this would have the added benefit of: 1) continuing receiving  a maximum amount of cash [6] and 2) further dividing the EU between countries still receiving their contractual Russian volumes (Austria, Bulgaria, Estonia, Germany, Greece, Hungary, Latvia, The Netherlands), those cut off from required supply and left struggling to balance demand at record prices (Lithuania, Poland) and those that can receive their required amounts from Gazprom as long as they remain politically quiet (Czech Republic, France, Italy).

Gazprom dependency in 2020 per country 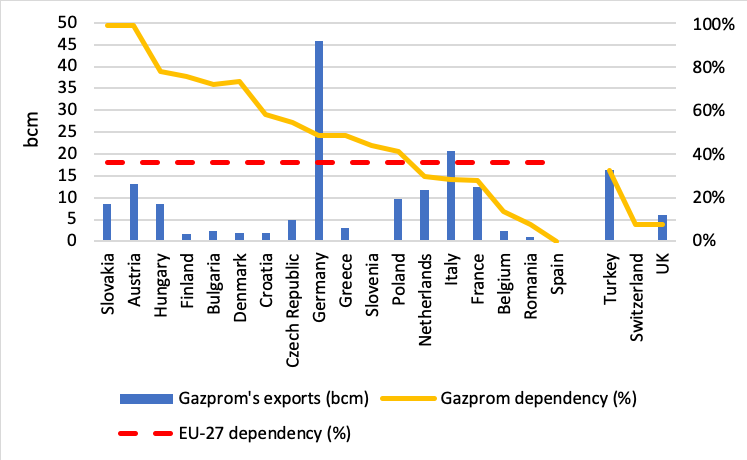 The Nord Stream 2 saga has been eclipsed by rising tensions over Ukraine this month. While previously it was expected the pipeline would be online in the second half of 2022, there is now talk of a further delay, perhaps indefinitely.

The grand EU ‘Green Deal’ or ‘fair energy transition’, launched by Ursula von der Leyen when she took the helm of the commission back in December 2019, has turned in front of her own eyes into an unfair climate disaster where energy consumers are paying more and the EU's emissions are worsening. This crisis is also leading to a massive wealth transfer from the EU to producing states and could push the bloc into a recession if it continues.

The energy crunch shows that gas is needed in the energy transition. Even with EU ETS allowances trading at a record level, the system is failing to fast-track reductions in emissions, as too many allowances have been provided for free. In April 2022, EU-27 2021 emissions data could be higher than in 2019. Even if the Commission can hide the hard truth by comparing EU-27 2021 data vs EU-28 2019 data (as the UK left between this period), the consequences of this drawback are huge. We could see:

·   The need to take allowances out of the Market Stability Reserve in 2030 to ‘relax’ the over-tight market.

That could lead to a huge additional upside for prices. This could make the political risks so high that policymakers are forced to trigger,  for the first time ever, article 29a [7] and/or put the #Fitfor55 package on the backburner as it is unacceptable for citizens.

The only positive outcome of the EU ETS in 2021 has been its churn rate that has increased massively. With a churn above 10, this is now a liquid asset class traded by more and more funds. 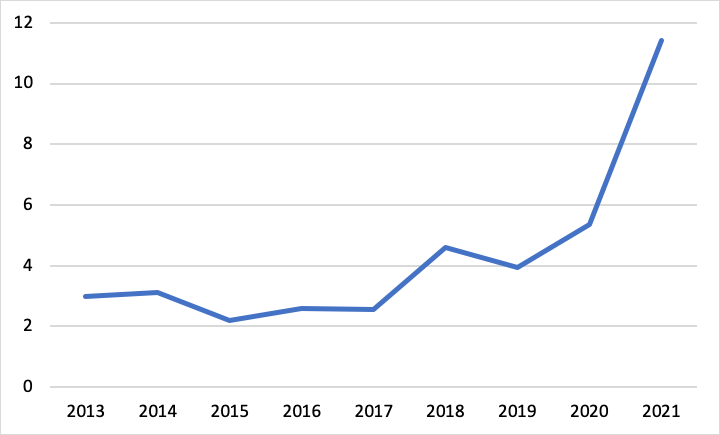 [6] With actual prices and volumes, Europe is transferring c. $7bn/month to Gazprom alone.

[7] Cost Containment Mechanism is a tool for the Authority to intervene if prices are elevated for a sustained period. ETS Article 29a provision allows EU to react and stabilise the market. “If, for more than six consecutive months, the allowance price is more than three times the average price of allowances during the two preceding years”, the European Commission shall immediately convene a meeting of the EU Climate Change Committee, which is made up of representatives from all 27 member states.