The Tema LNG terminal in Ghana is expected to receive its first cargo in coming weeks, after some delays, marking the start of operations for sub-Saharan Africa’s first LNG regasification terminal.

Ghana is no stranger to gas, sourcing 63% of its feedstock from domestic production in 2019 and the remainder from the WAGP, which originates in Nigeria. The introduction of gas has allowed a substantial expansion in overall generating capacity, which is now above 4 GW, and reduced the country’s dependence on hydro power. Hydro now makes up about 36% of generation, down from providing more than two-thirds of the country’s power supply in 2000.

Growing electricity demand was otherwise being met by oil fuels. The new supply of LNG should allow further displacement of distillates with cleaner burning gas. Over the last decade, Ghanian electricity demand grew by just over 7% a year on average and is expected to continue increasing by an average 6.4%/yr through to 2026.

The facility is offshore and consists of separate regasification and storage vessels. The floating regasification unit (FRU) has regas capacity of 1.7mn mt/yr and is expected to operate for 20 years. 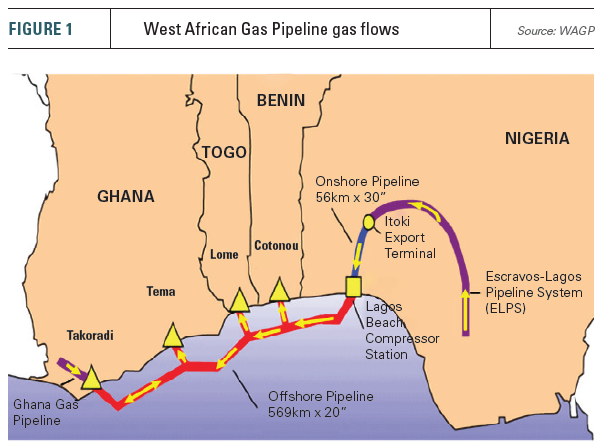 The purpose-built Torman FRU was constructed by China’s Jiangnan Shipbuilding and delivered in January. It completed its classification with Bureau Veritas in March. The FRU is permanently moored behind a breakwater at Tema Port. It is 95 metres long with two IMO-type containment tanks with combined capacity of 28,000m3.

The FRU will work in combination with the 2019-built 180,000 m3 Vasant Floating Storage and Production vessel, which is on sub-charter until July 2022.

The marine facilities were built by the China Harbour Engineering Company.

LNG for the terminal is to be supplied by Shell via a long-term agreement between the Anglo-Dutch major and the Ghana National Petroleum Company (GNPC).

Spanish LNG terminal operator Reganosa was this year awarded the contract to operate and maintain the terminal, including its associated 6 km subsea pipeline link to Ghana’s gas pipeline network and a pressure reduction and metering station.

While gas-fired generation is the most likely end use, LNG regasified at Tema is not part of a dedicated LNG-to-power supply chain. It looks possible that, in the short term at least, Ghana may have too much gas on its hands.

According to a report by the Oxford Institute for Energy Studies (OIES), published in July, regasified LNG is likely to a be a more expensive option than either gas imported via the WAGP or gas produced from Ghana’s Jubilee, TEN and Sankofa fields.

The OIES report says that gas has largely replaced oil in the power generation mix and the primary component of Ghanese gas demand is from the electricity sector. As such, demand depends heavily on the realisation of expected high rates of electricity demand growth.

Domestic gas production is another key parameter. Ghana’s gas fields lie offshore the Takoradi region, but can be transported east to Tema, owing to reverse flow capacity on the WAGP. Although there are commercial agreements to be ironed out, domestic gas supply looks robust and could benefit from project expansions at the Jubilee and Sankofa fields.

Meanwhile, imports via the WAGP from Nigeria have been beset by difficulties from the initiation of the pipeline. The gas contract covering Nigerian supplies appears to be in a near perpetual state of force majeure. A primary motivator behind Tema LNG was to provide supply diversity, but imported LNG could still face competition, if volumes via the WAGP increase.

The OIES report notes that domestic gas supply has reached record levels and Nigerian imports have become more stable and reliable. Other observers say there is a considerable risk that the GNPC could suffer major considerable losses as a result of take-or-pay contracts and limited demand.

However, gas demand has other elasticities, for example Ghana may be able to increase gas-fired generation and export the power to neighbouring countries via the West African Power Pool.

The first phase of the International Transmission Hub Project increased Ghana’s electricity export capacity to 200 MW via development of a transmission line between Bolgatanga in Ghana and Ouagadougou in Burkina Faso, and the country’s net power exports have increased substantially over the last three years.

A second possibility is the use of the Tema LNG terminal as a regional storage hub. Ecowgas, an affiliate of TLTC, announced in August that it had been awarded exclusive rights to build and operate storage and regasification facilities in both Liberia and Sierra Leone. In early November, the company announced a similar deal with Burkina Faso.

In addition to reloading and bunkering capacities, the Tema LNG terminal can bulk break LNG volumes from 7,000m3 to 30,000m3 by ship, which could then be transported to Ghana’s neighbours for use in small-scale supply chains. This would allow LNG access without the cost of a larger-scale import terminal. The terminal also has direct truck loading facilities, which will allow the larger national and regional distribution of LNG by road.

Ecowgas estimates that land-locked Burkina Faso’s gas demand will double in the next four years to about 25mn ft3/d. It puts regional demand for LNG at 1mn mt/yr for power generation and use in extractive industries. This is forecast to grow to 1.8mn mt over the next decade.

From the editor: Stalled coal-to-gas switching is bad news for emissions [Gas In Transition]