Chinese guarantees to underpin US LNG growth [Gas in Transition]

The LNG market is seeing the investment mood change faster than the British weather. From a bumper year of final investment decisions (FIDs) in 2019, one which appeared to close the looming supply gap in the mid-2020s, last year saw the investment landscape plunged into the doldrums amid low prices and cargo cancellations. Sempra Energy’s well-sited Pacific coastline project in Mexico, Costa Azul, was the only major project to get a green light.

This year, as economies rebound from the Covid-19 pandemic, clamp downs on coal-fired generation in both Europe and China have seen resurgent demand for gas ahead of winter. China is emerging as the most voracious buyer and one willing to commit to long-term contracts. It now looks likely that the next generation of US LNG plants will be funded for the first time on the back of the financial guarantees provided by off-take agreements with Chinese companies.

Spot LNG prices have been strong all year, with sellers not witnessing the usual summer slump. Chinese demand for LNG has been high to meet summer air conditioning requirements and a revival in industrial demand, underpinned by growing city gas use.

Brazil’s drought – the worst in 91 years – has meant low hydro generation in an electricity system which last year sourced 64% of its power from its reservoirs and run-of-river plants. Low hydro output has meant a resort to LNG imports, providing an important counter seasonal element of demand, one which has attracted US cargoes away from European and Asian markets.

In July, Brazilian and Argentinian LNG imports from the US were higher than China’s US imports, according to US Department of Energy data. LNG-to-power developers have rushed to bring their projects online, boosting Brazil’s capacity to import the fuel. In August, total demand from the three main South American LNG importers, Argentina, Brazil and Chile, for US LNG was 64.8bn ft3, more than three times pre-Covid 2019 levels, outstripping heightened demand from China of 51.7bn ft3 (Figure 1).

The situation in Europe is serious. Gas storage levels are at their lowest in ten years and winter heating demand is starting to rise. Towards end-September, just ahead of the October 1 start of the heating season, European gas storage sites were 72% full, compared with a 10-year average of 85%, according to Gas Infrastructure Europe data.

Severe and mild winters have a knock-on effect and with European gas storage emptied last year, strong summer pricing has meant stocks have not been rebuilt. Not only that but the weather forecast is not looking good with La Niña effects tending to produce colder weather in the early part of winter in the northern hemisphere.

As a result, LNG spot and European gas hub prices have continued to surge. The JKM price, which assesses spot LNG in Asian markets, soared over $50/mn Btu in October to hit a record just above $56/mn Btu. Prices have since moderated, but remain high.

All round, LNG buyers are still searching for spare LNG cargoes to secure supplies even as the chilly grip of the northern hemisphere Winter takes hold.

Despite high oil and gas hub prices, long-term contracts currently look a better deal than spot purchases, not just on price but the security of guaranteed volumes. This is having an impact on procurement strategies, the most notable development being recent deals agreed between US LNG suppliers and Chinese buyers.

US LNG developers have not in the past been successful in agreeing long-term deals with Chinese companies, despite the centrality of China to global growth in LNG demand. 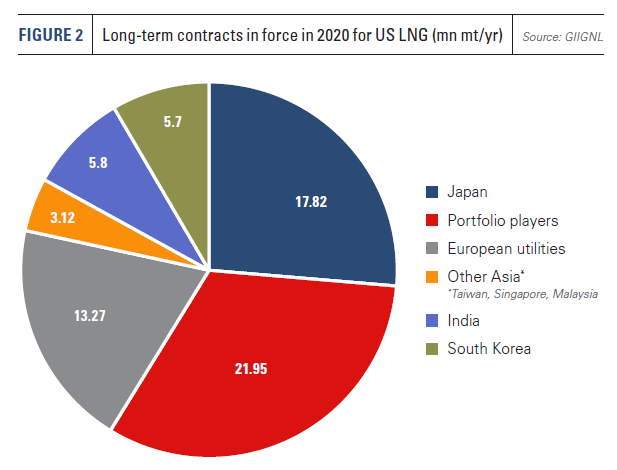 According to data provided by GIIGNL, the International Group of Liquified Natural Gas Importers, of all the long-term (over four years) contracts in force in 2020 relating to US LNG plants, none were with Chinese buyers (Figure 2), despite China buying 6.32m mt of LNG from the US in the first nine months of this year, according to Chinese customs data.

Portfolio players, with Shell and Total to the fore, provided the most contracted off-take with 21.95mn mt/yr, followed by Japanese buyers with 17.82mn mt/yr. European utilities take 13.27mn mt/yr, with other Asian buyers accounting for the remaining 14.62mn mt/yr, mostly from South Korea (5.8mn mt.yr) and India (5.7mn mt/yr).

Yet Chinese buyers are definitely interested in locking in long-term supply. Shenergy struck a deal with the UK’s Centrica for 0.5mn mt/yr of LNG over 15 years last year. Sinopec agreed to take 1.8mn mt/yr from Qatargas for 10 years, while ENN, Foran Energy and Guangdong Energy Group all signed small volume, short-term deals for LNG supply from European majors.

China’s ENN has stepped up its commitments by agreeing to take 0.9mn mt of LNG from major US supplier Cheniere over 13 years. The contract will start from July 2022. Then, in early November, Venture Global LNG announced two major deals each spanning 20 years, which will see Chinese state company Sinopec buy 4mn mt/yr in total from Venture’s proposed Plaquemines LNG plant near New Orleans.

Venture also announced a short-term deal with Unipec, the trading arm of Sinopec, for 3.5mn mt/yr of LNG from its under construction Calcasieu Pass terminal. The 10mn mt/yr facility is expected to start production in early 2022.

The Plaquemines LNG plant, to be built in two 10mn mt/yr phases, is expected to see an FID by the end of this year and there can be no doubt that the new deals with Sinopec increase the likelihood of a positive decision substantially. Venture already has Sales and Purchase Agreements (SPAs) for Plaquemines LNG with Poland’s PGNiG for 4mn mt/yr and with France’s EDF for 1mn mt/yr, which, in total, means 90% of off-take from the plant’s first phase is now covered by SPAs.

Meanwhile, according to comments made by Cheniere CEO Jack Fusco, the deal with ENN is for LNG supply from Corpus Christi Stage 3, on which the company expects to take an FID next year. Cheniere also landed in late October a 13-year agreement with commodity trader Glencore for 0.8mn mt/yr from Corpus Christi Stage 3 and then announced on November 5 a deal with China’s Sinochem.

Sinochem will take 0.9mn mt/yr LNG starting in July 2022, a volume which could increase to 1.8mn mt under a 17.5-year agreement. The Corpus Christi Stage 3 expansion will initially consist of two trains each with 0.82mn mt/yr capacity, now fully covered by SPAs, but is eventually envisaged comprising up to seven mid-scale LNG trains.

The message seems clear: the next generation of US LNG plants looks likely to be built on the back of Chinese off-take agreements (Figure 3).

A big question now for US developers is the bankability of the off-take agreements and from this perspective Venture Energy looks in a better position. Sinopec has an A+ credit rating from Fitch, while ENN’s rating is BBB-.

There is also the question of US-Chinese trade relations and the potential for LNG trade to become embroiled in higher-level political disputes. China’s informal ban on Australian coal imports is a case in point, while China’s large oil and gas companies have bowed to political direction in the past – they are, after all, state-owned enterprises in a largely state-controlled and directed economy. There are also questions over the enforceability of contracts and legal redress.

Moreover, during the Trump administration, uncertainty and antagonism in US-Sino trade relations was a key factor. This risk appears diminished under President Joe Biden, but there is no certainty with regard to the policies of future, potentially Republican, US presidents, nor of the competitive tensions that might arise between the two countries under the Democrats.

There are thus some important factors which may lead banks to ascertain higher risk levels to off-take agreements with Chinese companies.

However, the economic fundamentals appear undeniably positive. Chinese demand and US supply are well suited and the relative absence, so far this year, of new long-term contracts with Japanese, South Korean or European buyers, for example, reflects very different regional outlooks for gas demand. The EU, UK, Japan and South Korea have all committed to net zero carbon targets by 2050, increased energy efficiency and accelerated renewable energy construction, a future in which gas is expected to play a much reduced role in the energy mix.

China’s reliance on coal is much higher, its economy larger and its economic growth potential more robust. Even under stringent net zero scenarios, Chinese gas demand is expected to grow.

Moreover, prices might be high, but the balance of risk between buyers and sellers has swung in buyers’ favour over the last decade, as evidenced by the growth of spot trade, shorter contract durations, fewer restrictive clauses and more innovative pricing mechanisms. Competition remains fierce from other countries with major LNG ambitions, like Qatar and Russia, and not least amongst US LNG developers themselves.

China National Offshore Oil Corp signed a deal with Qatar Petroleum in September for 3.5mn mt/yr of LNG over 15 years, providing further indication of Chinese companies desire to lock in long-term LNG supplies. Qatar has embarked on a major expansion of its LNG industry, which should see capacity expand from 77mn mt/yr at present to 110mn mt/yr in the mid-2020s.

Given trade tensions between China and the US, Sino-Qatari and Sino-Russian relations may provide a more stable environment from the perspective of Chinese buyers.

Yet US developers can offer competitive terms and the interdependence created by trade in LNG may act as a moderating force in relations between Beijing and Washington. For the moment, US LNG developers are clearly happy to tie down the all-important off-take agreements needed to underpin the financing of their prospective LNG projects.

There are good reasons to like contracts tied to Henry Hub. US gas prices have risen amid the current scramble for gas in Europe and Asia, but to nothing like the same levels, despite US LNG plants working at full capacity and pipeline exports to Mexico still rising.

In contrast to the more than $50/mn Btu peak seen for spot LNG in Asia, US Henry Hub prices appear to have topped out at just over $6/mn Btu.

US LNG plants are almost unique in that they source feedstock gas from a deeply liquid, large and competitive gas market, which is still insulated to some degree from global pricing by US export capacity both LNG and pipeline. Moreover, domestic gas availability can grow relatively quickly, in part via the stock of drilled-but-uncompleted shale wells.

US power generators have been able to switch back to coal-fired generation to limit domestic gas demand, while above-average temperatures have moderated consumption for gas heating. As a result, US working gas inventories at the end of November were just 2.7% below the pre-pandemic seasonal average, according to EIA data, in stark contrast to the situation in Europe.

Buyers will be looking at how different long-term pricing mechanisms have performed in the recent period of price volatility and high spot pricing and Henry Hub looks better than European gas hubs and good even relative to oil indexation, owing to the steady rise of oil prices this year. The US gas market’s insulation from global pricing will decline as US LNG capacity grows, but for the moment Henry Hub looks like a relatively stable anchor for buyers and sellers alike.