The first commercial cargo has arrived at Poland’s LNG import terminal, which has been dedicated to the late Polish president, Lech Kaczynski.

Polskie LNG, operator of the terminal at Swinoujscie, announced that the first commercial cargo arrived there June 17 aboard the Al Nuaman tanker from Qatar. It was the first delivery under a term supply contract from Qatargas to Polish state-run importer PGNIG that was signed in March 2010. The ship unloaded over the weekend and has since departed.

The same ship, which has a cargo capacity of 210,000 m3, was used to deliver cargoes in December 2015 and February 2016 that were used to commission and test the 5bn m3/yr import terminal. Terminal owner Polskie LNG is a subsidiary of state-owned Polish gas grid operator Gaz-System. An expansion of the terminal’s capacity to 7.5bn m3/yr – equivalent to half Poland's current gas consumption – is underway. 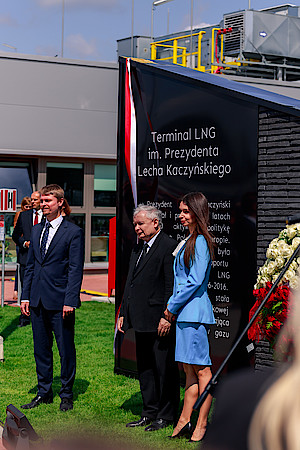 On June 18, the Swinoujscie terminal was dedicated in a naming ceremony to Lech Kaczynski. He, his wife and several leading government officials were among 96 killed when their Polish air force plane crashed in thick fog near Smolensk airport in Russia on April 10 2010. He had been due to attend a commemoration of the 70th anniversary of the massacre of thousands of Polish officers and others during the Second World War.

His daughter Marta and his brother Jaroslaw Kaczynski, head of Poland’s governing conservative Law and Justice party (PIS) and a former prime minister, together with Polskie LNG chairman Tomasz Stepien, unveiled a plaque in the late president’s name. In its statement, Polskie LNG said that Lech Kaczynski’s 2005-2010 presidency led to changes in Polish energy policy, one consequence of which was the development of the Swinoujscie terminal. Poland’s current president Andrzej Duda and the prime minister Beata Szydlo were also at the event.

Poland's Gaz-System is looking at a major redevelopment of its network to enable regasified LNG to be flowed deep into central Europe. Since the opening of Lithuania's terminal in late 2014, and with Poland's opened late 2015, and the prospect that one could open in Croatia later this decade, there is a stronger possibility than before that LNG could either displace traditional Russian imports in eastern Europe, or prompt Gazprom to keep its prices down in response to competition from cheap spot LNG from the world market.

PGNIG's 1mn metric ton/yr (1.4bn m3/yr) term contract from Qatargas, however, is indexed to oil prices, and not to cheaper spot gas values.