The framework’s aim is to create a gold standard for accurately and transparently reporting oil and gas sector methane emissions. It is targeting a 45% reduction in the industry’s methane emissions by 2025, and a 60-75% cut by 2030. NGW spoke with Giulia Ferrini, programme manager at OGMP, to discuss the initiative in more depth. 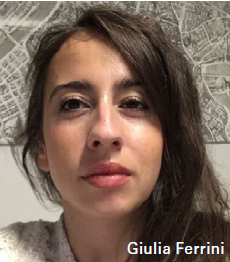 NGW – How would you assess the oil/gas industry progress so far in addressing its methane emissions?

Giulia Ferrini – We've witnessed increased awareness on methane emissions management in the oil and gas industry in recent year. When the OGMP was first launched by the UN Environment Programme (UNEP) and the Climate and Clean Air Coalition (CCAC) at the United Nations Secretary General’s Climate Summit in 2014, many companies had limited awareness about methane emissions from their activities, and even less knowledge about properly mitigating these emissions. Since then, awareness on the importance of methane mitigation and the industry’s efforts have significantly increased.

Some of this progress has been driven by increased public attention on the oil and gas industry, which has been shaken by an increasingly negative public sentiment — in a recent survey by EY, only 37% of respondents said it trusted the industry to do the right thing. Faced with this perception and increasing pressure from investors, governments and civil society, industry action is becoming more ambitious. Today, most major oil and gas companies have committed to methane reduction targets, such as the Oil and Gas Climate Initiative collective target of 0.25% methane intensity target by 2025 and BP’s target of 0.2% methane intensity by 2025. Some have also implemented comprehensive methane reduction programmes to help them achieve these goals and are exploring opportunities for increased methane monitoring and measurement.

But awareness is not enough. While many companies have demonstrated increased ambition on methane, some are still lagging, and increasing atmospheric methane concentrations demonstrate that the industry as a whole has failed to reduce methane emissions by the amounts necessary to limit warming to 1.5°C.

Recognising the need for greater action, OGMP member companies agreed to re-imagine the framework to make it more ambitious, impactful and comprehensive. In 2020, UNEP, the European Commission, the Environmental Defense Fund, the CCAC and member companies adopted the OGMP 2.0 to improve the accuracy and transparency of methane emissions reporting, aiming to deliver a 45% reduction in the oil and gas industry’s methane emissions by 2025 and 60-75% by 2030, or a near zero methane intensity target. By adopting the new framework, OGMP companies commit to reporting on methane emissions levels from all material sources across the entire oil and gas value chain, including both operated and non-operated assets. 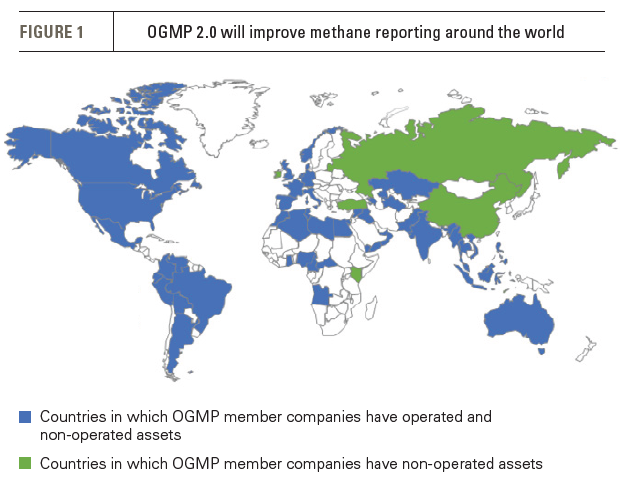 NGW – What is the main incentive for joining OGMP 2:0? Many oil and gas companies are already participating, but are you hopeful that eventually a majority or even overwhelming majority of production can be covered? How do you see this happening?

GF – Covering one third of world’s oil and gas production within the first year is a solid start. But of course we firmly intend to grow this coverage substantially to include the overwhelming majority of the industry.

A particularly impactful feature of the OGMP 2.0 is that companies commit to report on the emissions from both their operated and non-operated assets – and we encourage them to set emissions reduction targets for both. The inclusion of non-operated assets dramatically increases the footprint of the partnership and already means that a firm majority of the industry is engaged, either directly or indirectly. There are substantial benefits for companies to join the OGMP, and we are seeing that more and more companies are recognising this and contacting us directly to join.

The main incentive for joining the OGMP 2.0 is that it provides companies with credible means to demonstrate to governments and to the general public that they are progressing against their methane reduction targets and managing their emissions responsibly. This will be an increasingly critical element of the societal license to operate and the acceptability of fossil gas as part of the energy transition. The OGMP also constitutes an important peer learning platform for the industry, allowing member companies with varying level of expertise on methane emissions management to share knowledge and experience, and jointly produce technical guidance based on that exchange. Moreover, as it will become increasingly easier in the future to determine companies’ emissions through satellite observation, companies should begin managing and mitigating their emissions as soon as possible.

OGMP membership is growing continuously and discussions are ongoing with other potentially interested companies. Since 2014, membership has increased from 10 to currently 74 member companies – with the vast majority joining after the announcement of the new, more ambitious reporting framework.  As previously mentioned, this is partly due to the increasing pressure that oil and gas companies are facing from the public, investors and governments. For instance, the European Commission in its Methane Strategy published in October 2020, described the OGMP as “the best existing vehicle for improving measurement, reporting and verification capability in the energy sector” and noted that the framework will serve as a basis for its upcoming binding regulation for the industry, which is expected to be tabled in 2023.

Another explanation behind growing OGMP membership are the efforts that are being made by member companies to engage with industry partners from non-operated ventures and encourage them to report their methane emissions, as well as UNEP’s ongoing efforts to recruit new companies from along the global oil and gas supply chain.

NGW – Member companies have 3-5 years to achieve compliance on standards for operated/non-operated assets. What happens if they fail to achieve this compliance?

It is important to acknowledge that not all companies have the same capacity for direct measurement – which is required to achieve Level 4/5 – and thus some may not aim for Gold Standard immediately. OGMP is open to any companies that are interested in methane mitigation, regardless of their current emissions levels, measurement capacity, and mitigation progress.

NGW – Do larger companies have an advantage over smaller companies in achieving compliance? (for factors such as economies of scale)

GF – Larger companies might indeed have more technical and financial capacity, as well as experience in methane emissions reporting and management. However, smaller companies may have more flexibility and can quickly apply solutions to similar facilities comparing to the big, often vertically integrated companies.

One of the benefits of joining the OGMP 2.0 is that it is an important knowledge and experience sharing platform between companies with different levels and areas of expertise, with the aim of supporting all members in addressing challenges they face through open dialogue and technical guidance.

Furthermore, the guidelines outlined in the OGMP 2.0 Framework on what emissions are considered “material” are a mechanism to focus member company efforts on the biggest opportunities from the perspective of reducing methane emissions, rather than placing unnecessary burden on smaller emitting sources. 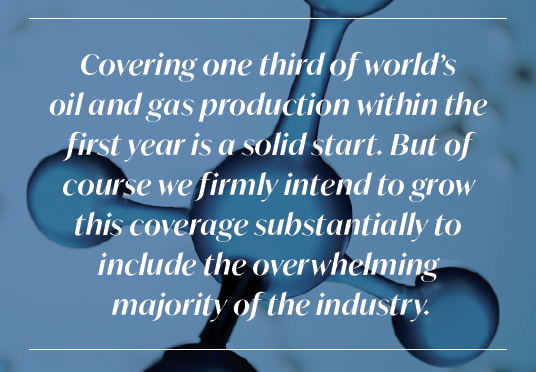 NGW – The IEA 2020 methane tracker estimates that 40% of current methane emissions could be avoided at no net cost (or even negative cost). At least in the case of profit-driven commercial entities, if this is the case, why haven’t companies addressed these emissions already?

• Culture: Many companies, including several of the biggest oil and gas companies in the world, have already started to address their methane emissions. However, for a large number of companies, methane mitigation has not yet been ranked alongside other key priorities such as financial propriety and safety.

• Investment incentives: There are diverging investment incentives for methane mitigation. First, mitigation projects face tough competition for capital, as companies have other investment opportunities, some of which may have higher returns or quicker payback periods. Second, the owners of the gas are not necessarily the owners of the equipment, thus the party who manages the emissions does not benefit from the saved gas. Finally, joint venture partners can have diverging priorities, particularly when the partner is a state-owned entity.

• Local market/ infrastructure: In some cases, a lack of infrastructure limits the ability of operators to get abated gas to market for commercial use. This is often the case with associated gas from oil production.

• Data/ Information: Companies often lack awareness on their methane emissions levels and the cost-effective nature of abating these emissions. This occurs because few companies actually measure their emissions comprehensively. Some companies have also expressed concerns on the accuracy of the IEA data, as the emission level and abatement cost vary from site to site and company to company. This reinforces the critical importance of better emissions data, which is exactly why we’re engaging oil and gas companies in the OGMP 2.0 to encourage companies to report their emissions following a rigorous measurement process. To further address the data problem, United Nations Environment Programme and the European Commission have established the International Methane Emissions Observatory (IMEO) to address the methane data problem issues. By collecting wide-ranging data from various sources, including OGMP company reporting, IMEO will reconcile inconsistencies among the data and bridge the gaps by applying state-of-the-art data science techniques. The final product will be a public dataset that provides a detailed picture of methane emissions around the world.

NGW – How do inconsistencies between reported/bottom-up, and observed/top-down methods for quantifying methane emissions arise? Because of these inconsistencies, companies are often accused of underreporting when their data is compared with satellite data. What does the evidence indicate? Is it more a case of companies underreporting or satellite data overestimating? Or is the jury still out on this one.

GF – Recent methane science studies show that often methane emissions are either underestimated or misallocated. This is because most emissions are estimated using decades-old emission factors that are based on relatively simple calculations, not direct measurements, and which can be computed without involving much operational staff. The OGMP 2.0 changes that. Companies – as part of their pursuit of the “Gold Standard” – commit to increase the quality of their reporting from Level 1 – an unspecified overall emissions estimate – to Level 4/5, which is an empirical reconciliation of measurements at source and site level.

This approach accomplishes two things. First, it increases the accuracy of the data and allows for a better understanding of methane emissions sources, which in turn allows for the prioritisation of mitigation actions. Second, it also directly involves operational staff, which will plausibly lead to behavioural changes and changes in company values. Decades-long programmes in the oil and gas industry to increase safety have relied on similar engagement processes to deliver results beyond what a mere compliance framework could achieve.

Satellites are already showing their potential as a game-changing data source, but the massive amount of data they generate needs to be carefully understood and combined to effectively drive mitigation action. Methane measurements from satellites will continue to play an important role in the innovative approach of IMEO. IMEO will address the methane data problem by collecting, integrating, and reconciling data from all sources, including scientific measurement studies, satellites, industry reporting through the OGMP 2.0, and national inventories. All this data will be used to generate a public dataset with a clear indication of data confidence and uncertainty. This will allow IMEO to engage companies and governments around the world to utilise this data to target strategic mitigation actions and support science-based policy options.

NGW – What can governments do to drive forward technological innovations to make methane quantification easier and more accurate?

Governments can provide support to research and development of methane quantification technologies such as remote sensing, support development of new technologies to measure methane emissions from some sources, e.g. slip gas from flaring. However, on the whole this is not a technology problem. We have the methods, technology and theory of change to fix this major environmental problem, so there is no excuse for not acting now.

Vaca Muerta: An opportunity to respond to the global energy crisis