State producer Nigerian National Petroleum Corporation (NNPC) has said that gas flaring is less than one-third of its recent peak. But that means it is still roughly 10% of production. Nigeria's finance minister says a change in the law is needed to eradicate it completely.

According to NNPC's December 2017 monthly report, the total of gross gas production that was flared that month was 9.53%, representing a volume flared of 701.81mn ft3/d (equivalent on an annualised basis to 7.25bn m3/yr).

Nigeria had seen a sharp drop in gas flaring from a peak of 2.5 bn ft3/d a few years ago, to about 700mn ft3/d today and falling, said NNPC group managing director Maikanti Baru at a recent speech at the 2018 Oloibiri Energy Forum in the capital Abuja. He also projected that, in the next few years, Nigeria will have stopped routine flaring from all its gas producers.

Nicolas Terraz, chief executive of Total's upstream business in Nigeria, recently said during the Nigeria International Petroleum Summit (NIPS) conference that the Egina development project, operated by Total which came on stream in 2018, will be a zero gas flare project, as the company is mindful of health and environmental safety. But several companies operating in Nigeria have been involved in gas flaring, especially in the Niger Delta region, causing environmental and health hazards.

It has been illegal to flare gas in Nigeria since 1984 without the written permission of the Minister of Petroleum Resources. Current 'charges' for gas flaring in Nigeria officially stand at naira 10 (2.75 US cents) per '000 ft3 of associated gas flared. Again in the early 2000s, the Nigerian government recommitted itself to ending routine gas flaring by 2008, and again failed to achieve the target. Flaring was reduced in the decade since, and Nigeria's ranking fell from fourth to seventh worst-flaring nation between 2013 and 2016, according to World Bank data.

But the low charge for gas flaring means that some companies still prefer to flare rather than re-inject or market the gas, because they can get tax breaks on the charges they pay for gas flaring.

Finance minister Kemi Adeosun (pictured below) in January 2018 criticised the way that companies can pay such 'charges' and then offset them against their tax bills. She said the gas flaring 'charges' have cost Nigeria billions of dollars in lost revenues.

According to Adeosun, the legal framework of the gas flaring penalty contained the word 'charge' and a charge is tax-deductible. So the government is approaching lawmakers to amend the law and have the word "charge" replaced by 'penalty' - as a penalty cannot be offset against tax. 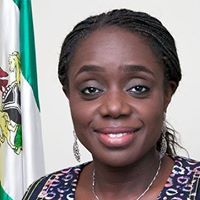