S Korea's gas use spiked in the first six months of the year and it is expected to subside again in the second half; a trend that could continue unless the purchase price of LNG falls faster than that of competing fuels.

South Korea imported a record 22.7mn metric tons of LNG during the first half of the year, up by a sixth on the same period last year, according to South Korean customs data. Much of this increased demand came as the country shut down around half of its 24 nuclear reactors for scheduled maintenance.

Only six reactors are expected to remain offline for the rest of the year, which will result in South Korea pulling back its LNG imports. However, the country is already buying LNG cargoes for storage ahead of the upcoming winter season. State Kogas, which procures most of the country’s LNG through long term oil-indexed contracts, is expected to place more spot purchases in anticipation of higher prices later this year.

South Korea’s LNG procurement for the longer term has also been forecast to grow substantially, given the decision the president, Moon Jae-In, took last year to move the country from over reliance on coal and nuclear power generation to renewables and more gas, all of which is imported as LNG. 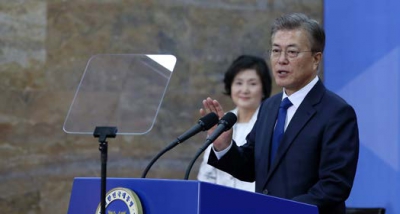 His policy move came after two earthquakes measuring 5.1 and 5.8 on the Richter scale struck the country on September 12, 2016. The 5.8 quake was the largest on record in the country, creating public backlash over nuclear safety concerns, and resulted in the subsequent shut-down of four nuclear reactors. Public support for nuclear power in South  Korea has been falling since 2011, when the Fukushima nuclear plant melted down in nearby Japan.

Nuclear generation accounts for nearly one third of South Korea’s electricity generation and about 22% of installed generating capacity, according to the US Energy Administration’s (EIA) most recent analysis of the country’s energy sector. South Korea, Asia’s fourth-largest economy, generates 45% of its electricity from coal, while LNG meets 17% of power demand and renewables only 6%.

Under Moon’s reforms, coal-fired power generation is projected to decline from 40% to 21% of electricity generation capacity by 2030, while nuclear power will drop from 30% to 22%, and be replaced by gas and renewable resources.

Gas’ share of the country’s energy mix under Moon’s plan is expected to increase from 17% to 27% and renewables – now consisting of mostly hydro-power – are set to increase to a fifth.

Moon’s plan will also require the installation of 47.2GW of new generating capacity from renewable resources in only 12 years, an ambitious undertaking that has drawn criticism within the country, including concerns of high costs. South Korea expects its electricity demand to grow 1.3%/yr to 100.5GW in 2030, about 11% below its previous forecast in 2015.

However, despite Moon’s plan to ramp up gas use as part of the country’s energy mix, some analysts are claiming that those plans are moving slowly and may never fully be implemented.

Energy Aspects, an independent energy research consultancy, said recently that the change could be time-consuming, noting that rather than gas, South Korea has turned to new coal plants to offset the loss of nuclear power generation, a politically divisive topic in the country.

In 2017, the year Moon won the election and formulated his energy policy shift, coal-based generation increased by 15 TWh (12%) with gas only increasing by 0.63TWh (1%), the consultancy said. It added that while new government policies will take some time to have an impact, up to 2025, the policies are more likely to stimulate an increase in renewables and only gradually improve use of natural gas plants.

Keun-Wook Paik, an associate fellow of the Energy, Environment and Resources department at London-based Chatham House and an expert in Asian energy issues, told NGW that “during the last 12 months the Moon administration's highest priority was given to the expansion of renewable energy in South Korea's energy mix in the coming decade, but the priority given to the expansion of gas was not up to the expectation of observers.

“The administration's direction for the energy policy change was right, but there was no proper co-ordination with regard to the implementation of the energy sector reform,” he said. “So far the gas expansion initiative looks modest at most, and it raises the question how far the change to gas will be taken.”

Trying to lower the cost of gas

Part of the problem with turning to more gas may be its high cost. The Energy Aspects report said that gas needs to be cheaper to play a bigger role in South Korea's future energy mix. One of the keys to obtaining cheaper prices is power and gas market liberalisation in the country, a policy shift not addressed yet. Paik said that one way for South Korea to reduce the cost of its LNG imports would be if Kogas, which sources most of the country's gas supply, and South Korean independent power producers, can mobilise the most competitively priced LNG supply. He said that South Korea alone will have difficulty in securing the LNG supply source with an optimal price, so LNG co-operation with Japan and China will be very important.

On May 9, at the Seventh Trilateral Summit in Tokyo, representatives from South Korea, Japan and China announced that they would join forces to co-operate in LNG procurement, a possibility first discussed in 2015 at a meeting in Seoul. The consensus at the time was that LNG sector co-operation was needed, notwithstanding considerable and long standing diplomatic and political differences between the three countries.

A joint statement from the May summit said an MoU for LNG co-operation was reached in order to “improve the transparency and liquidity of the northeast Asian LNG market.” Japan is the world’s top LNG importer, followed by China, South Korea, India and Taiwan. The Asia-Pacific region represents 72% of all global LNG demand with that total set to increase to 75% led by robust gas use in China.