The announcement by Turkey's energy market operator Epias that it began sharing gas market data on July 28 is a significant step on the road to the planned launch of a gas trading market September 1.

The data is being released on a daily basis to allow traders and other potential market participants to get a feel for market movements ahead of the launch of trading in September, and follows the launching April 1 of Epias market platform allowing test trading with the aim of perfecting the in house software which will be used for the new market.

The new market being will allow continuous 24-hour trading for day-ahead delivery based on a system matching bids from gas buyers and other market players with offers from suppliers.

According to Epias board member Mustafa Karahan, the intra-day market is itself just a first step and once the market has achieved a degree of liquidity, there are already plans for the Istanbul Stock Exchange, Bist, which holds a 30% stake in Epias to launch a gas futures market.
Epias' other shareholders are Turkey's state power grid operator Teias, with the remaining 40% held by 109 Turkish and international energy companies which bought shares through an open tender when Epias was first incorporated.

It is expected that part of Teias’ stake will be transferred to state pipeline operator and gas importer Botas after gas market trading starts although to date no announcement has been made to that effect. Epias’ new gas trading platform is expected to be used by all gas market participants. These are the eight companies licensed to import gas by pipeline - Botas, plus seven private companies; another 45 companies with spot LNG import licences; 56 companies holding wholesaling licences; 72 companies holding distribution and retail licences; and a small number of companies producing gas from Turkey's limited reserves.

Turkey's gas market continues to grow despite increasing efforts by the government to reduce dependence on imported gas for power, with the country now relying on spot LNG imports to meet mid-winter peak demand.

Demand grew by 15.9% last year, to 53.857bn m³, for the first time exceeding Turkey's total long term contracted import portfolio which at the time stood at 53.8bn m³. This record was made possible by the commissioning of two floating LNG storage and regasification units the previous year.

Russia is Turkey's main gas supplier with Botas importing 4bn m³/yr via the country's western import line and 16bn m³/yr via the Blue Stream pipeline. In addition seven private companies import a total of 10bn m³/yr of Russian gas via the western line. Botas also imports 9.6bn m³/yr of Iranian gas via a 25 year contract which became active in 2001 and 6.6bn m³/yr of Azeri gas under a contract which became active in 2006, and from which it exports up to 1bn m³/yr to Greece.

In June Botas began importing Azeri gas through the newly commissioned TransAnatolian Pipeline, expected to deliver 1bn m³ by the end of this year and to reach the contracted 6bn m³/yr by mid-2021. Botas also holds long term contracts for 4.4bn m³/yr of LNG from Algeria and 1.2bn m³/yr from Nigeria, imported via the country's two on land LNG terminals and the two new FSRU units. 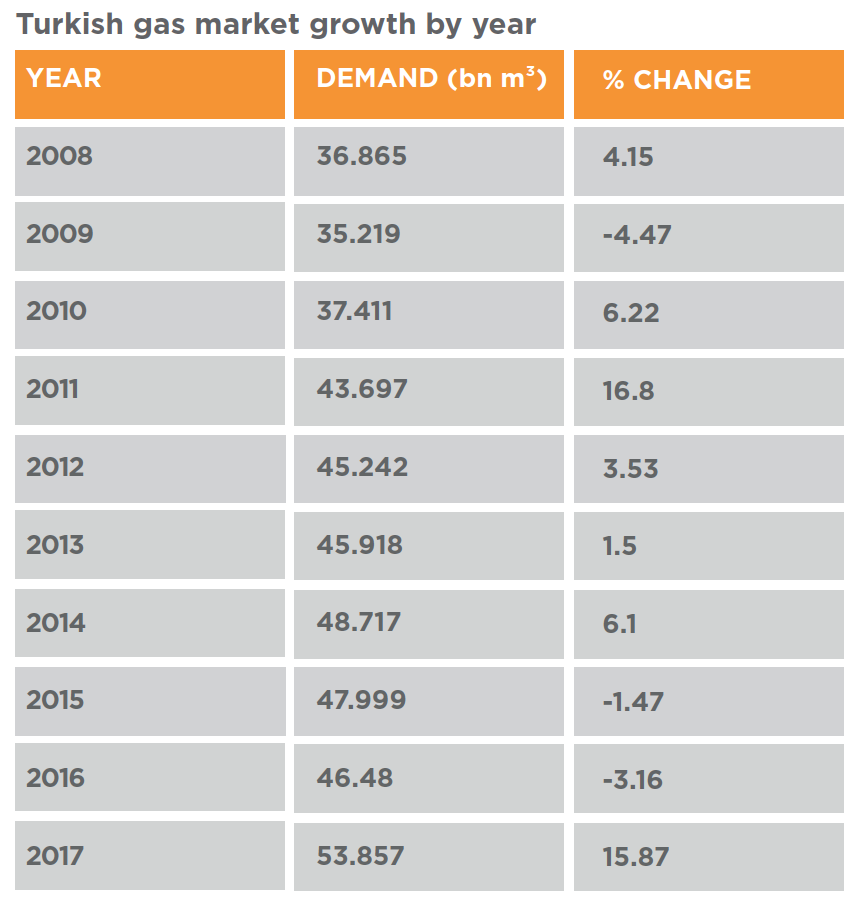 Turkish imports dip in May

Turkey’s gas imports during May were down by 19% year on year, from 3.72bn m³ to just over 3bn m³, which was mostly the result of power generators switching to the cheaper coal. The power sector, which had 32% share of the total demand, reduced its gas use by about 18% to 1.67bn m3 in May, according to statistics from EPDK.

Electricity generation from gas declined by 22% to 5.846 terawatt-hours (TWh) in May, to account for just a quarter of Turkey’s overall power production. In contrast the amount of power produced from coal rose by 56% to 4.54 TWh while that from lignite rose by 37% to 3.81 TWh. That meant coal’s share of total Turkish power production reached 20% while lignite’s reached 16.4%.

The energy ministry over the past two years has increased efforts to reduce dependence on imported gas by building power plants that run on domestic coal and renewables, whilst also continuing to invest in new LNG terminals, and new pipelines to import gas from Azerbaijan (Tanap) and Russia (TurkStream). It's believed Turkey wants to generate more baseload power from coal, but keep the option to use gas to meet generation for peak demand periods; its 'Vision 2023' policy last year aims to boost renewables' share in the electricity mix by then to 30%, raise coal to 30%, raise nuclear to 10%, and reduce gas to 30%.

However not all recent monthly statistics have shown a decline in Turkish gas imports. In terms of how Turkey received its May gas supply, piped gas imports were down 27% year on year at 2.454bn m3 , while LNG imports increased by 20% to 0.554bn m3. Domestic production in Turkey is tiny.

During the five months to May 2018, Turkey’s overall gas imports declined by 5% year on year to a little more than 23bn m3, despite LNG’s share of that increasing by 21% to 5.73bn m3.  Qatar increased its deliveries by a factor of 4.7 times to account for 30% of Turkey’s five-month LNG intake. Turkey also exported 238.44mn m3 of piped gas to Greece in the same period, 13% more year-on-year. 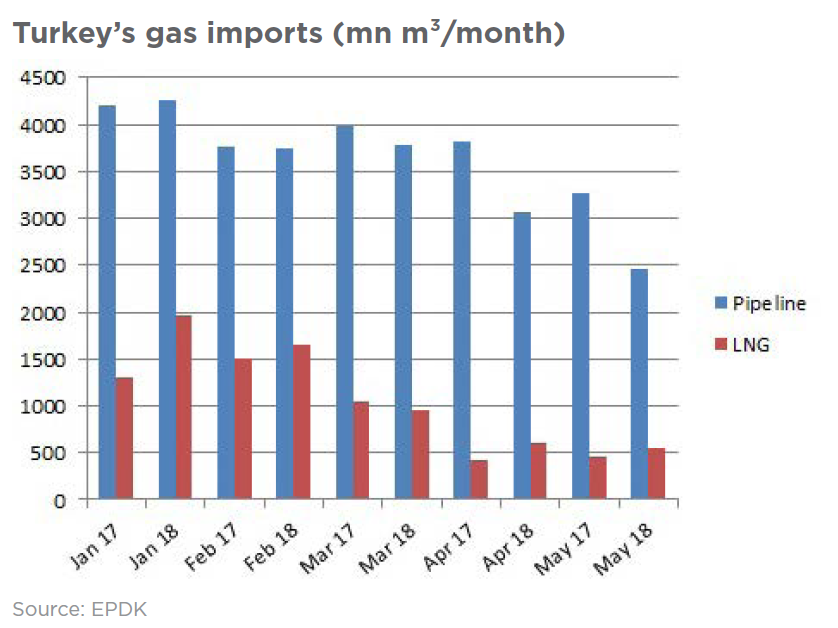