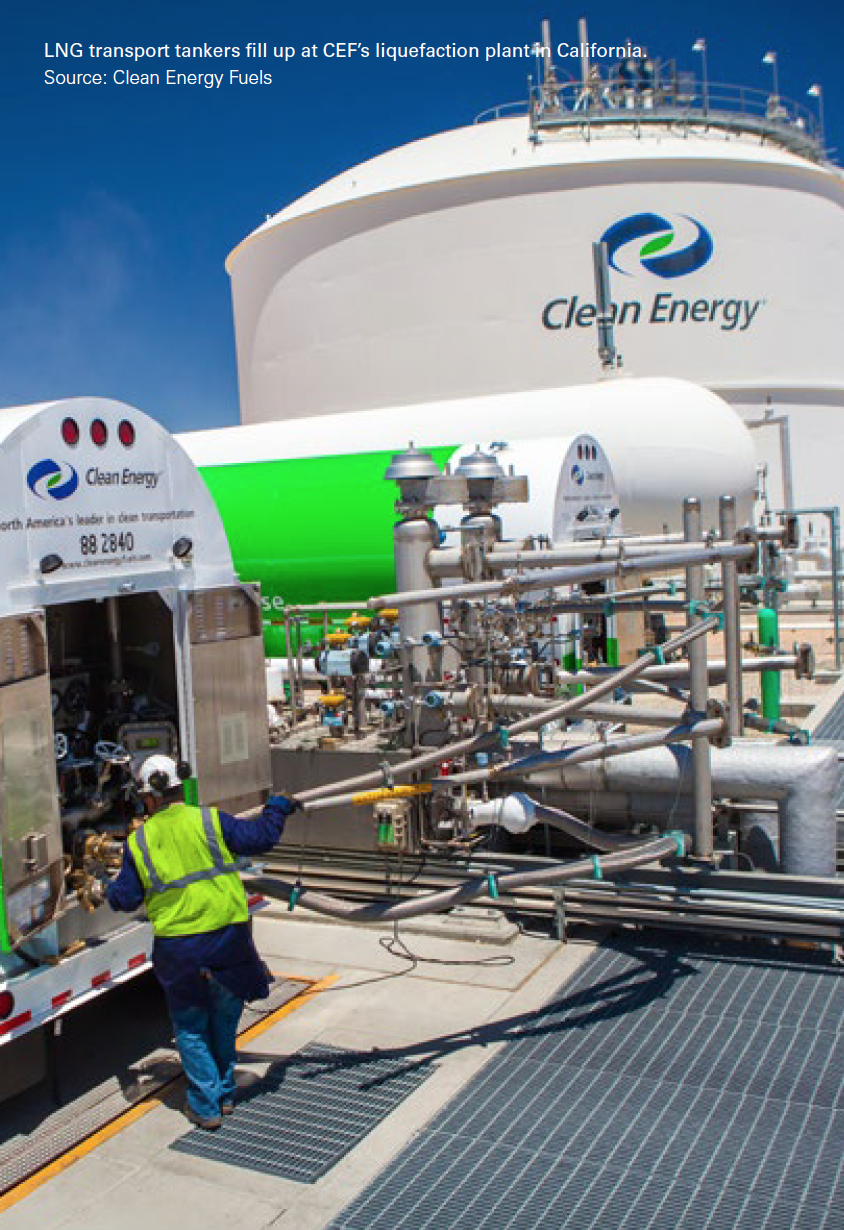 Clean Energy Fuels (CEF) has been around in one form or another since oil and gas pioneer T. Boone Pickens created a new division at his Mesa Petroleum in 1991 that offered natural gas conversion kits.

Now it is hoping the financial heft of its major new shareholder, France’s Total, can make a major fuelling push into the fleet of 3.2mn heavy-duty transport trucks on America’s roads.

The Mesa Petroleum division was spun off in 1996 by Pickens and another Mesa Petroleum employee, Andrew J. Littlefair, as Pickens Fuel, with three fuelling stations, one employee and a repair truck. A year later, Pickens Fuel bought Southern California Gas Company’s 33 natural gas fuelling stations for $3.6mn, and in the second half of 1997 sold the equivalent of 2mn gallons of gasoline equivalents (GGE) in the form of natural gas.

Two decades on, Littlefair is CEF’s CEO (Pickens remains on the board of directors) and the company is selling about 400mn GGE of compressed natural gas (CNG) and liquefied natural gas (LNG) vehicle fuel from a network of more than 550 owned/operated public and private stations in 43 states and two Canadian provinces.

Overall in the US, Littlefair told NGW in a recent interview, the potential market CEF is targeting represents sales of about 40bn diesel gallon equivalents (DGE) – or nearly 5.6 trillion ft3 of natural gas, according to conversion data supplied by CEF. Most of that is found in the over the road transport market – about 35bn DGE, or nearly 5 trillion ft3, while the rest comes from airport support vehicles (2bn DGE), refuse collection (2bn DGE) and municipal transit (about 1.5bn DGE).

CEF currently fuels 16,000 transit buses every night in Los Angeles, Santa Monica, Dallas and Washington, to name just a few. And it helps fuel a growing national fleet of refuse collection trucks – 60% of all new garbage trucks sold these days are fuelled by natural gas.

“But when you look at the real potential, the over the road [long-haul] truck market, probably only about 15,000 of the 3.2mn trucks in the US are using natural gas,” Littlefair said. “This is the last market we have targeted but just as we introduced new natural gas engines, the price of oil collapsed and took some of the wind out of the sails of natural gas as a fuel for the over the road trucking market.”

In the last few years, however, oil prices have started to climb, natural gas prices have stagnated and sustainability issues have permeated many of the consumer-facing sectors that utilise the US transport truck market – companies like Procter & Gamble, Home Depot and UPS are increasingly concerned with sustainability, and are making their sustainability initiatives a key part of their public messaging, according to Littlefair.

“Look at Procter & Gamble, for example. Their customers, the end-users, are very interested in the environment and sustainability, so P&G takes the sustainability thing very seriously, and natural gas meets that concern: lower tailpipe emissions, like NOx; a quarter of the greenhouse gas emissions, and when we put the renewable natural gas component in – from landfill methane and the cattle industry – there is 70% less carbon,” he said. “That really gets their attention, and they also know that their carriers can save them some money, so that’s good too – it’s kind of a win-win.”

Driving CEF’s push into the over the road truck market is the latest generation of engine technology for heavy-duty transport truck applications: the Cummins Westport ISX12N natural gas engine. Certified by both the California Air Resources Board and the US Environmental Protection Agency (EPA), the 12-litre engine is rated by both agencies as producing just 0.02 grams of nitrous oxide (NOx)/brake horsepower/hour, 90% lower than current EPA standards.

That’s pretty good environmental performance, Littlefair said, but the performance comes at a cost: the new engine and its accompanying fuel system represents a $40,000 incremental increase over the cost of a diesel-fuelled transport truck, and that’s a pill that many fleet operators have been reluctant to swallow. But payback on fuel savings alone – CNG or LNG is priced at US pumps about $1/gallon less than diesel – can come in as little as two years, assuming each truck burns through 20,000 gallons of fuel in a year.

Which is where Total comes in, Littlefair said. “When we got Total to become our largest shareholder, one of the things we asked them to do was put up $100mn of financing for us to be able to go out and essentially address what we run up against with fleets – the cost of converting to CNG or LNG,” he said. “With our Zero Now financing program, backstopped by Total, we can go to a fleet and tell them they can buy or lease a natural gas truck at the same cost as a diesel truck. We will then lock that customer’s fuel cost in for the life of that lease – five or six years – and that fuel price will be substantially less than diesel.”

Total is not completely unfamiliar with the natural gas for vehicles business: it has more than 300 retail stations scattered around Europe, tailored primarily to light passenger vehicles. But it sees real opportunity in achieving even greater emissions reductions by pushing into the heavy-duty transport market that CEF is so familiar with.

“Customers and regulators around the world are demanding cleaner transportation alternatives, particularly in the heavy-duty market,” Total CEO Patrick Pouyanne said in May when his company took a 25% stake in Clean Energy Fuels. “Natural gas can become the fuel of choice. Total believes there is a strong development opportunity in the natural gas for transportation market in particular in the US, which benefits from unique giant low-cost gas resources.”

Total is also interested in learning more about CEF’s North American refuelling infrastructure, which encompasses some 550 owned or operated stations in the US and two in BC’s Lower Mainland. It is also building three more along Ontario’s busy Highway 401 for Union Energy Solutions – an unregulated affiliate of distribution utility Union Gas – which is bringing natural gas fuelling options to fleet operators in Canada. All three should be open by the end of September.

The US network is concentrated along the vast spiderweb of American interstate highways. In many places CEF has partnered with Flying J, which operates 650 truck stops in the US and Canada and sells more than 11bn gallons/yr of diesel. Two of the Ontario stations will be co-located at Flying J truck stops.

With its focus on building along the interstate web and partnering with Flying J, Littlefair sees little need to significantly build out its refuelling network, although new stations may be developed at strategic, under-served locations. It’s not really about how many stations the company has, he said, it’s more about making sure they are in the right place – every 200 miles along an interstate, for example.

“Our current network as it exists could probably fuel three times as many gallons as we are selling today. We have a lot of room and capacity in our current network to go from 350mn gallons to over 1bn gallons, without really spending any more money.”

Initially, CEF put only LNG into its refuelling stations, with the belief that LNG made the most sense for long-distance truck fleets. But CNG refuelling technology has come a long way in recent years, and now, in heavily-populated areas, it makes more sense than LNG, Littlefair said.

“In some markets, the super-regional markets like LA to Vegas and back, LA to Phoenix and back, CNG is really hard to beat because you’ve got the established pipeline infrastructure in place,” he said. “CNG is very efficient now – we’ve got the range on a CNG tractor up to around 600 miles and so what we’ve done is we’ve added CNG to our truck stops. Many are now both CNG and LNG; some are just LNG, some are just CNG.”

But CEF isn’t looking at just the Lower 48 States: it has recently begun making ISO exports of LNG produced from one of its two liquefaction plants to Hawaii Gas, where it will be used in that company’s distribution grid to displace more expensive synthetic natural gas produced from naphtha feedstock. And it is bunkering three ships home-ported in Los Angeles – a business which is expected to expand as new marine transport emissions restrictions come into effect in 2020.