As explained back in October, the on-going takeover flurry in the US Permian can be explained by major companies' desperate need for flexibility in an energy transition world, where the forecasts are more and more difficult to establish. The Permian has proven to be extremely flexible with a reduction of 1.4mn barrels of oil equivalent (boe)/d, a drop of 17% in hydrocarbon production in just 2 months between March and May 2020. And now with oil prices above $60/barrel, Permian oil production should recover fast... 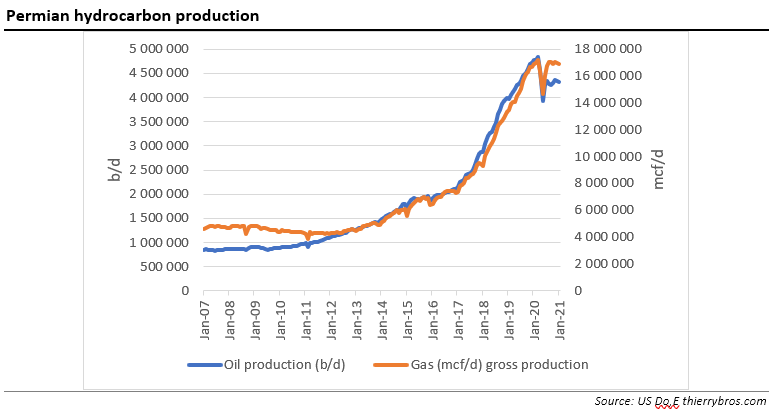 With a 26% production growth year on year, Chevron took the lead in 2020, overtaking Occidental Petroleum. The acquisition of Noble Energy completed in October 2020 impacted positively only Q4 2020 production data. We should expect further growth in 2021. Interestingly, Chevron is stating in its report that it “has implemented a factory development strategy in the basin”[1] demonstrating that the Permian is in a unique production area, far away from any other tailor made facilities.

Pioneer Natural Resources managed to grow its Permian production by 5% in 2020 year on year. But as it closed its Parsley acquisition on 12 January 2021[4] both of them have been added, on an historical basis, to provide an idea of what 2021 ranking could look like. 2020 Parsley high growth (31%) is mostly explained by the acquisition, during the year, of Jagged Peak Energy…

ExxonMobil's growth has been extremely high and resilient in the past few years, culminating with a 35% increase in 2020 vs 2019. This clearly shows that ExxonMobil is valuing this asset more than any other worldwide and explains the divesting of less strategic[5] assets. This high growth is allowing ExxonMobil to overtake EOG (+9% year on year).

After a record growth in 2019, Diamondback Energy witnessed a moderate (8%) growth in the Permian. But with the pending merger with QEP Resources[7] and the acquisition of Guidon[8], Diamondback should witness a growth of more than 17% in 2021. As the deals are not closed both listed companies are still represented below. Diamondback is overtaking Cimarex which witnessed a drop (-4% in 2020 vs 2019).

SM Energy managed to grow its Permian production (+10%) while total production was down 4% from 2019, as development activity was significantly scaled back starting in the second quarter, and production was curtailed in response to macroeconomic effects of the pandemic and global supply-demand imbalances in South Texas (-21%). This tends to prove first, that Texas production is flexible and second, that it is on the low cost end, relative to South Texas.

The graph excludes Concho (added to ConocoPhillips); Apache (which has stopped providing a regional split in its US production); Jagged Peak Energy (merged with Parsley); Parsley (added to Pioneer), WPX (added to Devon) and Noble (merged with Chevron). 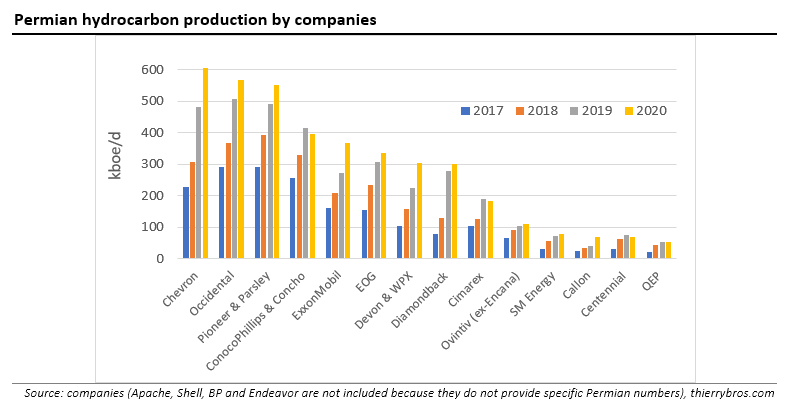 Companies need to have access to flexibility on the up- and down-sides to be able to cope with whatever happens in the medium term. Outside Opec, only the Permian seems to be able to provide the flexibility in a fast and affordable way; hence the consolidation should continue. Going forward, global players with a strong foothold in the Permian will be able to produce baseload, as usual, their conventional assets and to match any unexpected /unforecastable swing in demand thanks to shale oil. Permian will be used going forward to cover the many energy transitions hiccups! As we can expect a lot of hiccups, the value of Permian is going up.

Cheniere boasts of strength in a competitive LNG world