Nearly all Nord Stream 2 to Go to C Europe

Central Europe will receive nearly all the throughput from Nord Stream 2 – the 55bn m³/yr gasline that the Russian export monopoly Gazprom is financing and now building on its own, or at least until foreign partners can be found to invest in it.

German transmission system operator Gascade – a Gazprom-BASF joint venture – told NGW this week that a small amount of gas from Nord Stream 2 would flow into the North European Line (NEL), built to carry Nord Stream 1 gas, once the necessary compression has been added. This could mean around 4bn m³/yr. But the bulk of the gas, 51bn m³/yr, is destined for a new 485km twin-pipe Gascade transmission system called 'Eugal' that would bring gas from Greifswald down to the German-Czech border, effectively shadowing the route of the existing 35bn m³/yr capacity Opal pipeline.

From the German border, the gas would flow through existing capacity across the Czech and Slovak republics to the Baumgarten hub in eastern Austria; much of this capacity would, by then, have been freed up by Gazprom's declining gas exports via Ukraine.

Gascade says the Eugal project is still in its early stages, but hopes that gas can start flowing through the first of its twin pipes in late 2019. 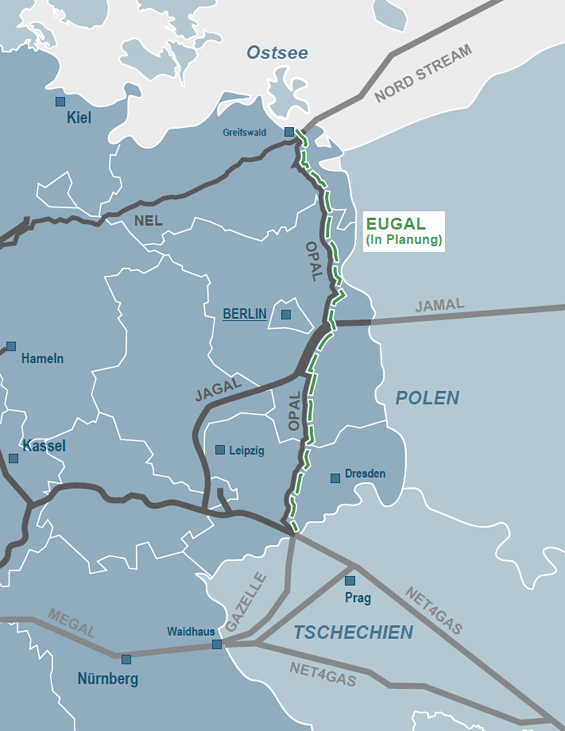 The route of the planned Eugal pipeline (in green) effectively shadows that of the existing Opal line; country names are in German; pipe names are the same in English (Photo credit: Eugal)

Among the claims made for the route of Nord Stream 2 have been its relative cost-effectiveness compared with Ukraine; and the certain demand, given decline upstream: the UK and Norway for economic/geological reasons and the Netherlands, for health and safety reasons.

At the moment though about 87bn m³/yr of Nord Stream gas are set to end up in eastern Europe, thanks to the two Nord Streams, and only 23bn m³/yr in northwest Europe, which is not even as much as the legislated reduction in output from the Dutch Groningen field over the past few years.

In the absence of any plans that might emerge later to expand NEL, this raises questions about what gas will supply northwest Europe as production declines over the coming years: LNG or pipeline gas?  Three main scenarios are possible.

Early schemes – now apparently buried – for Nord Stream included an offshore strand that either landed in the Netherlands and crossed the Channel to the UK, or used spare capacity in offshore pipelines on the UK continental shelf to connect Denmark beneath the North Sea to England.

Then there is the LNG, heading to world markets and much of it having to flow in order to return cash to investors. Northwest Europe has much under-utilised import capacity for LNG. That would mean Gazprom reducing sales in its major markets and where it has invested in storage.

Third, there is the mix of renewables, energy efficiency and other relatively expensive or dirty ways of maintaining firm energy supplies that can displace gas demand.

But this looks a dubious approach. In a press release late January, Gas Infrastructure Europe reminded readers that pipelines are a highly efficient form of moving energy. The total amount of gas transported in the EU on January 17 was equal, in energy terms, to the electricity used by 1.3mn households in a year, it said.

Another industry association, this time representing suppliers, Eurogas, likewise argued last month that a strong gas network in Europe was a pre-requisite to achieving low-carbon, efficient and renewable energy at low cost.

Gasunie says Dutch LNG platform could be ready by August