An LNG storage ship arrived in Malta on October 10 which is expected to be used for several years to help the island nation generate power from gas.

The Armada LNG Mediterrana floating storage unit (FSU) berthed at Marsaxlokk Bay, according to The Times of Malta and other local newspapers. The ship set sail from the Singapore shipyard where it was made in early August.

The vessel will store LNG, which will then be regasified onshore for use by the country's new gas-fired power stations. A 200-MW new gas-fired power plant (or CCGT) was built this summer at Delimara, close to Marsaxlokk Bay in southeast Malta. The new plant – owned by Electrogas Malta – doubles the existing Delimara site's overall installed capacity to 400 MW. Electrogas shareholders (each with 33.333%) are Germany's Siemens, Azerbaijan state-owned Socar Trading, and privately-owned Maltese joint venture GEM Holdings. 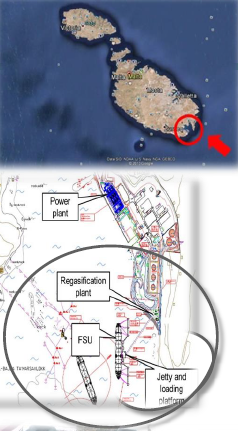 In other Mediterranean news, Azerbaijan's Socar agreed October 10 to buy the Aliaga oil and LPG terminal in western Turkey from Austria's OMV; no price details were given. Socar is building its brand new 200,000 b/d STAR oil refinery, also at Aliaga, which is due to start operations in 2018.

TurkStream due offline June 21-28 for maintenance