This article is featured in NGW Magazine Volume 2, Issue 16

Nigeria wants to double gas-fired generation capacity to 10 GW by 2020 – half the target outlined seven years ago. Steering the industry away from exports towards a strong gas economy is proving difficult.

Nigeria has the ninth-largest gas reserves in the world, and the largest in Africa, and yet for decades has focused on oil to the near-exclusion of any gas monetisation except for exports. To redress the balance, Nigeria's industry leaders have been discussing how to double the amount of gas-fired generation to 10 GW by 2020. The government also published a gas strategy in May and approved a national gas policy (NGP) in June 2017.

Nigeria generates no more than 5 GW from gas, for a population of some 180mn. There are frequent power cuts as plants go offline owing to gas supply constraints.

Its 2010 Roadmap for Power Sector Reform set a target of 20 GW by 2020 – twice today's target – but that goal was stymied by militant attacks on infrastructure in 2015-16, plus a subsequent fall in inward investment in the power and upstream sectors. Can such setbacks be averted this time around?

State-owned Nigerian National Petroleum Corporation’s group managing director Maikanti Baru met with Thomas Dada, president of upstream group Nigerian Gas Association (NGA) August 11 to discuss ways in which industry might achieve the government’s target. The government released its Economic Recovery and Growth Plan (ERGP) in May which outlined its own ideas for that, along with other goals.

Baru said that NNPC is committed to expanding generation and distribution capacity nationwide, which he said is reinforced by the government’s recent approval of a National Gas Policy. Among NNPC goals is connecting reserves in the eastern part of the country with high gas demand in the west.

NGA’s Dada also welcomed the idea of 10 GW target but also called on the government to settle outstanding debts owed to producers for their gas supplies. Neither NGA and NNPC outlined what steps were needed to double gas-fired generation in barely three years. Instead Baru said that Chinese banks were ready to invest as much as might be needed in Nigerian oil and gas projects. However, Nigeria's power minister Babatunde Fashola, a former Lagos governor, has often said that power generation, and especially transmission and distribution infrastructure, are inadequate because of a lack of maintenance, and that these need to be the priority. 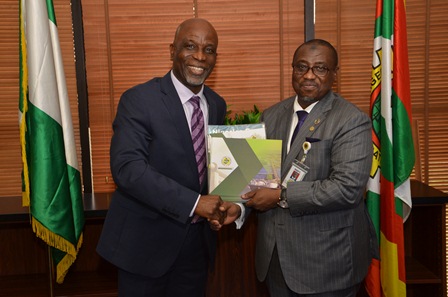 Dada though said: "We would like to congratulate the NNPC on a number of paradigm shifts, changes, and initiatives it had brought to the fore in recent times. I am talking about the new alternative funding which you recently signed with Shell and Chevron to the tune of $1.78bn; the clearing of $400mn debt in April; and the progress being made on the Elf 2Loop lines and the OB3 gas project, one of the most critical gas pipelines in the country.”

In his speech to the Presidency Quarterly Business Forum in Abuja July 11, Nigeria's petroleum minister of state Emmanuel Ibe Kachikwu had called for stronger co-ordination between the gas and power sectors, noting that most gas used inside Nigeria is for power generation.

He said the government wants to foster a 'gas revolution' in Nigeria, through its Power Sector Recovery Plan (PSRP) in tandem with the World Bank. The latter is providing some financial support over a two-year transition period. Nigerian deputy president Yemi Osinbajo told the same event that private sector-led investment was critical to PSRP's realisation.

There have been some rays of hope too, in terms of actual supplies to power plants.

While the World Bank is supportive, the recent Gas 2017 report published mid-July by the International Energy Agency noted in more sobering tones that "in Nigeria, Africa’s biggest economy, militant attacks on gas facilities, the absence of political reforms, and a lack of investment have led to structural gas shortages. The reduction in gas-fired power generation by 50% from recent average levels has deprived millions of power and hurt the economy."

The IEA report added that an increase in Nigerian oil output could provide more associated gas for the economy but that "uncertainties around the security situation... make any upward expectation of gas demand highly unlikely." An IEA official also told NGW that international oil companies are "very careful about investing upstream" in what they see to be a market that is not functioning well.

The NGP, approved by Nigeria’s federal executive council (cabinet) in June, sets goals, strategies and an implementation plan for the introduction of an appropriate institutional, legal, regulatory and commercial framework for the gas sector and was authored by the country’s Ministry of Petroleum Resources, led by Kachikwu.

Kachikwu is rooting for a complete and comprehensive use of Nigeria’s gas, first as a solution to the country’s incessant power generation problem and second to underpin the development of manufacturing – such as building materials – transport and agriculture, as fertiliser feedstock. But is it relevant to Nigeria’s needs?

Olufola Wusu, a Lagos-based energy lawyer who reviewed the NGP for the Department of Petroleum Resources (DPR), told NGW that the new policy is designed to create a separate gas industry, monetise the country’s abundant gas assets, and to use gas’s by-products to expand or develop new industries. “I have reviewed the NGP for various foreign and local investors, it is safe to say that the National Gas Policy is a step in the right direction; it gives a certain degree of regulatory certainty for investors,” he said.

“The NGP plans to increase gas supply, to the power sector, gas based industries, encourage the use of gas by buses and trucks in business hubs, rail, ship and even cars, domestic use of gas, transportation of gas by truck, ship and rail,” adds Wusu. He adds that traditionally Nigeria's strategy was to maximise LNG exports but, with that global market now oversupplied, domestic use of gas is now to be prioritised in the NGP.

IHS Markit’s Nigeria analyst, Josh Holland, though takes a different view. He told NGW July 24 that its implementation will take substantial time and effort. “While the new policy seeks to enhance all aspects of the sub-sector, its top priority is to create a wholesale domestic gas market to ensure that the country’s power sector is supplied with sufficient gas feedstock. This would boost the oil and gas sector’s contribution to economic development via improved energy security and economic competitiveness,” said Holland.

“So much will need to be changed in terms of petroleum sector institutions, gas regulations/fiscal terms. A healthy dose of scepticism is in order – especially because the policy’s success will hinge to a large extent on concurrent power sector reform as well,” he added.

“If harnessed productively, namely through attractive investment incentives, gas development with a focus on domestic utilisation could have a transformative effect on the local economy over time. But creating a well-functioning domestic gas market – both production and consumption – is easier said than done, especially given Nigeria’s significant political, economic and petroleum/power challenges, low capacity and current oil-focused export orientation,” concluded Holland.

Nigerian House of Representatives’ Gas and Power committee member Garba Mohammed Gololo told NGW July 26 that, in implementing the NGP, the government has every intention of pursuing more gas exports – as opposed to maximum domestic use – which would flatly contradict Kachikwu's stated objectives. But he admitted the domestic market would not be totally abandoned.

Meanwhile the Okpai Independent power plant phase II remains on hold since November 2015, when it was to have doubled its 480-MW generation. Kachikwu and Eni CEO Claudio Descalzi agreed to a doubling of Okpai when they met in Rome January 23 this year. Opened in 2005, the Okpai IPP is a joint venture of Eni and NNPC and is one of very few power plants to be part-owned by an international oil company in Nigeria.

In contrast, the privately-funded 450-MW gas-fired 'Azura' independent power project, under construction, is expected to start up 2H 2018. But that’s believed to be largely because it reached financial close late 2015, before the most disruptive militant attacks on Niger Delta gas assets.