In this exclusive interview, Noé van Hulst, one of the world’s most experienced energy policymakers, explains how and why hydrogen will fundamentally change the energy world. According to Van Hulst, “for the natural gas industry, hydrogen is the chance to become part of the energy transition.” He has been amazed at the enormous grassroots support for hydrogen that he is encountering every day. “The general public has a huge interest in hydrogen.” 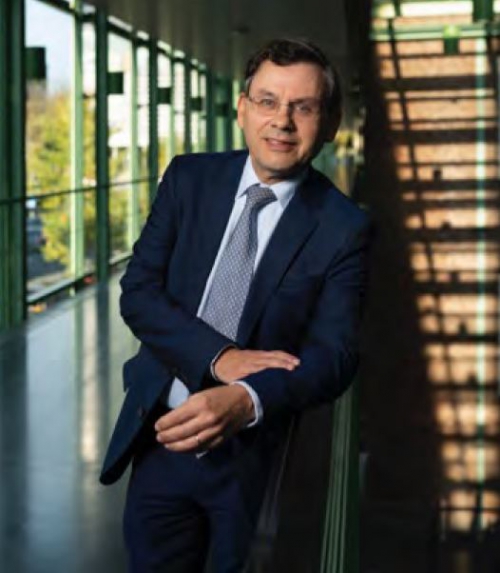 Talk to Dutch “hydrogen ambassador” Noé van Hulst for an hour, and you will walk away excited about what hydrogen is going to mean for the future of the world. “All over the world people now realise that 2050 is going to look fundamentally different than today,” he says. “And hydrogen is a big part of that story.”

Van Hulst (63), whose official title is Special Adviser, Top Management Group & Hydrogen Envoy at the Ministry of Economic Affairs & Climate Policy in the Netherlands, is not just any energy expert. He has had a long, distinguished career in the international energy sector. He was Director-General Energy at the same Ministry in the early part of the century. In 2003, he went on to become one of the Directors at the International Energy Agency (IEA), responsible among other things for the publication of the World Energy Outlook (Fatih Birol worked for him at the time).

In 2008, he moved to Riyadh, Saudi Arabia, to become Secretary-General of the International Energy Forum (IEF), the high-level international organisation created to facilitate dialogue between energy producing and consuming countries. He came to Riyadh just when the oil price exploded and the need for “dialogue” between OPEC and the rest of the world had never been more urgent. (Van Hulst: “It seems that always when I go somewhere, things are happening.”) After a short stint as Director of Energy Academy Europe in Groningen, The Netherlands, he was appointed Dutch ambassador to the OECD in Paris, a post he held for five years. During part of this time he was also Chairman of the Governing Board of the IEA.

In October 2018, Van Hulst took on a new post that did not exist before: he was appointed “hydrogen envoy” of the Netherlands. That does not mean he has been taking it easy. Far from it. The Netherlands, a long-time natural gas producer and exporter, has decided to phase out production from its giant Groningen field by 2022 and to replace consumption of natural gas entirely by 2050, and the Dutch government is giving top priority to developing hydrogen as an alternative.

For the Netherlands finding an alternative for natural gas is critical and most Dutch experts agree that hydrogen is the most viable option. The country is home to a number of large energy-intensive industrial clusters, built on the back of its domestic natural gas resources, which experts believe can only be decarbonised with the help of hydrogen.

It also has an extensive gas pipeline network that could be used for the transport of hydrogen. “After the phaseout of the Groningen field, a few years from now, we will be in a unique position to have ample unused gas transport capacity that we can use for hydrogen transport,” says Van Hulst, when we interview him in his office in The Hague. “No other country has that.” He adds that Gasunie, the national gas infrastructure company, is already at work building a hydrogen backbone that will connect the industrial clusters in the Netherlands with each other.

But to make the hydrogen revolution happen, the Netherlands is also looking beyond its borders. The country is cooperating closely with Germany, which has a large energy-intensive industry as well, and with other European countries, such as Austria, Belgium, France and Portugal. It also collaborates with the US, Australia, Korea and Japan. Van Hulst was flying to Japan days after this interview to attend a hydrogen fuel cell conference there. He explains: “In the Netherlands we are convinced that international cooperation is key to making the hydrogen transition work. It will have to be produced and traded on a global scale. That is the only way to bring costs down sufficiently fast enough and to produce the volumes that we need. That’s why my job was created: to do what we can to make this happen.”

According to Van Hulst, Europe will inevitably need to import large amounts of hydrogen to meet its needs. There is nothing wrong with that, he notes. “Europe has always been a net energy importer. Just like Japan and South Korea.” One of the major suppliers may be Australia, says Van Hulst. “According to some calculations, Australia can produce seven times as much renewable electricity as the country needs. And it will be dirt cheap, maybe 1 cent per kWh. They are planning to convert this to hydrogen and export it. Shipping sunshine around the world, their chief scientist, Alan Finkel, calls it. They believe it may well become a bigger export industry for them than LNG! That was really an eye-opener to me.”

In addition, Van Hulst believes it is likely that countries in North Africa will in future produce “green” hydrogen for export to Europe. Germany in particular has announced it wants to invest in “energy partnerships” with African countries and equip them with the means to produce hydrogen. The Netherlands is also embarking on cooperation with MENA-countries on hydrogen. Although a similar scheme to produce and export solar power to Europe, Desertec, has not been very successful, Van Hulst believes that with hydrogen it will be different. “Transporting molecules is 10 to 20 times cheaper than electrons and more efficient. And we can use all the existing gas infrastructure that we have, the pipelines running through Spain and Italy, and going north, for the transport of hydrogen. That’s a totally different situation than with Desertec. This is how I see the gas transition: from gas with CO2 emissions to gas without CO2 emissions.”

Van Hulst firmly believes “blue” hydrogen (i.e. made from natural gas and combined with carbon capture and storage) will have an important role to play in the transition. This is also the conviction of the Dutch government. “Until 2030 we will be building around 1 GW of additional offshore wind capacity per year in the North Sea, but that will mainly be destined for greening our electricity supply. Only after 2030 much more capacity will gradually become available to produce green hydrogen. With blue hydrogen, we can deliver CO2 emission reductions much quicker. At the same time, it will allow us to build up a hydrogen infrastructure, which can then be used for increasing volumes of green hydrogen. The infrastructure is colour blind after all.”

He emphasizes that it’s not a question of either-or, but and-and: “We will do both. And we won’t postpone production of green hydrogen. That starts now as well. So blue hydrogen is not a lock-in of natural gas. It’s clear that in the longer term, green hydrogen is the holy grail.”

How will all this impact the gas industry? It will have to adjust to this new reality if it is to have a future, says Van Hulst. “The industry has to adapt. It can play a role in repurposing the infrastructure, developing new standards and applications, including in home heating systems. Hydrogen offers an excellent opportunity for the gas industry to be part of the energy transition.”

For Van Hulst it is clear that there is no alternative. “We have no choice,” he says several times in the interview. He recounts what it was like to return to the Netherlands in 2012 and speak to students at the Energy Academy Europe in Groningen after nine years abroad working in international energy diplomacy. “I discovered that the mood had really changed. For young people sustainability is not an issue anymore. It’s a given. Regardless of their political leanings.” And he believes this attitude is now nearly universal. “Everywhere I go, including in the Middle East and in emerging economies, people are convinced that the climate problem is huge and has to be addressed. We have no choice. The alternative of facing the huge cost of climate change is simply unacceptable.”

Nevertheless, for all the urgency of the climate issue, the development of clean hydrogen, whether blue or grey, seems to go very slowly. The biggest electrolysers that have been built are not more than 10 MW yet. CCS is hardly getting off the ground. How can Van Hulst believe in a hydrogen revolution? “I don’t agree that things are happening slowly,” he answers. “We are talking about a big change with big projects that will operate for many decades. You can’t expect things to move any faster. I am expecting an FID this year for Porthos, the big carbon capture project in the port of Rotterdam. By 2025, we will be building 500 MW electrolysers and 3-4 GW in 2030 based on the current pipeline of projects. Scaling up will take decades but it will happen.”

Van Hulst points out that the Netherlands is envisioning the potential of 60 GW of offshore wind capacity in the North Sea by 2050. That’s twice as much as the country’s current total electricity generation capacity. “This means we will produce much more green power than we need in the electricity system itself.” That’s why, he notes, “the big wind energy producers are already looking at the hydrogen market to deliver power to. They know they will need this market to grow longer-term.” He adds that companies will have to get out of their silos to make use of the opportunities of this new market. “We will have to build new value chains that will require new business models, new types of contracts. Success in the hydrogen market will come to those that are able and willing to look beyond their own narrow expertise.”

In any case, says Van Hulst, it would be a big mistake to think that business sees the move to hydrogen as a burdensome duty. On the contrary. There is great enthusiasm in the business world to make this work, he says. “A big Dutch industry association, FME, published a report in October 2019 that showed there are already 250 companies active in clean hydrogen in the Netherlands. At this moment. You would not believe how many hydrogen projects are going on, in towns all over the country, some very small-scale.” The interest of the general public interest in the topic is also enormous, says Van Hulst. “I don’t think there is a single publication in the Netherlands that hasn’t paid attention to hydrogen. And I have heard from a reliable source that in Germany articles about hydrogen on the site of one major newspaper get more hits than articles about Angela Merkel or Donald Trump!”